ValueWalk
Home Business Top 10 richest people in China: One got $23B richer amid COVID-19 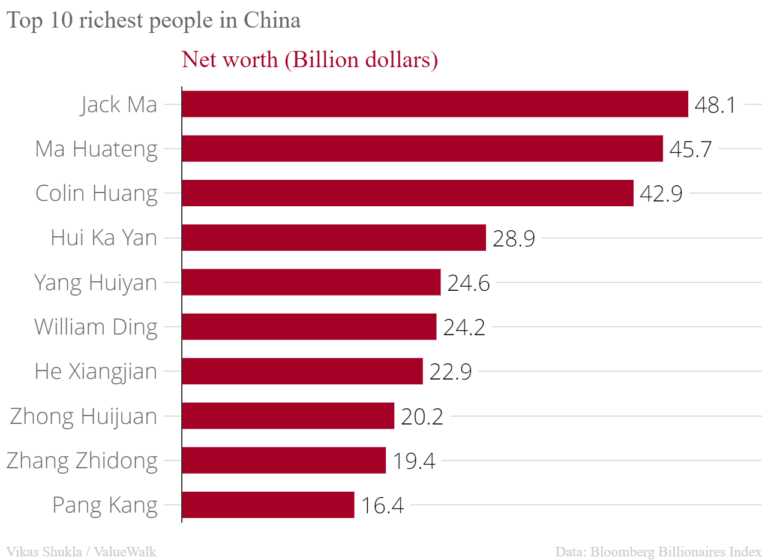 A couple of months ago, I wrote about cities with the most billionaires. I wasn’t surprised to see three Chinese cities (four including Hong Kong) were in the top ten. By comparison, only two American cities – New York and San Francisco – found a place in the top ten. China is rapidly closing the gap with the US in terms of the number of billionaires. According to Forbes, the dragon has 407 billionaires. Here we take a look at the top ten richest people in China.

Despite the COVID-19 pandemic, seven out of the top ten billionaires in China have seen their net worth go up this year. In fact, the net worth of one billionaire has shot up from $19.6 billion at the beginning of this year to $42.9 billion as of June 18, 2020. The list below is based on the real-time net worth data from Bloomberg Billionaires Index.

Ranked: The richest people in China 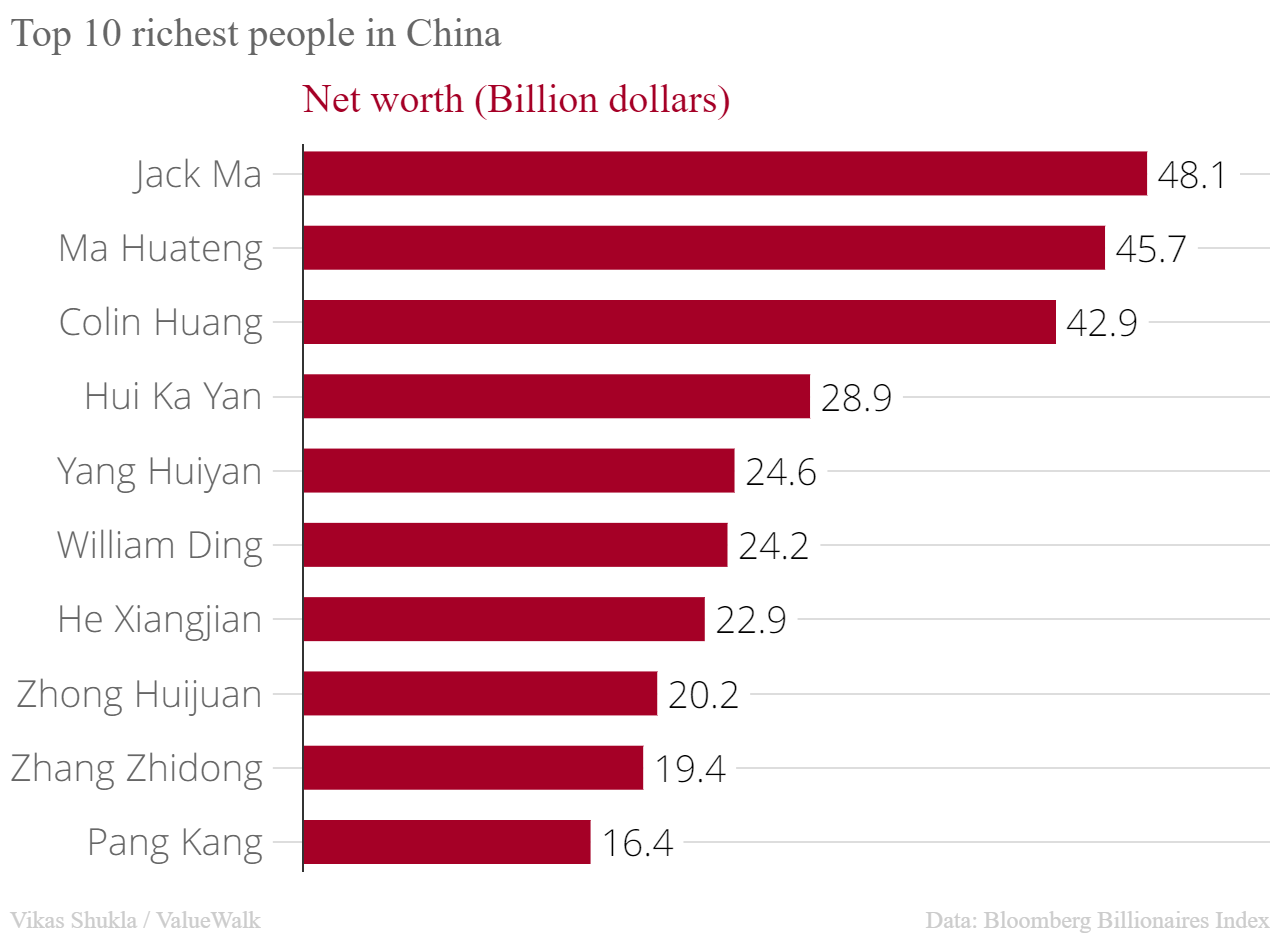 Jack Ma is the co-founder and former executive chairman of Chinese e-commerce giant Alibaba Group. As the coronavirus pandemic has forced people to stay home, e-commerce sales have shot up. Jack Ma’s net worth has risen by $1.47 billion since the beginning of this year. Ma has donated millions of dollars worth of medical supplies to different countries in the last few months to help fight the pandemic.

Ma Huateng aka Pony Ma is the media-shy chairman and CEO of Tencent Holdings. Tencent’s super app WeChat has more than one billion active users. The company has also entered movie production, music, video gaming, and many other industries over the last few years. Tencent has also invested in some of the world’s most successful startups including Spotify and Snap.

Colin is the chairman and CEO of Pinduoduo, the second largest online marketplace in China after Alibaba. His net worth rose from $19.6 billion in January to $42.9 billion as of June 18, 2020. Pinduoduo stock has more than doubled year-to-date. The company raised $1.6 billion in its 2018 IPO on Nasdaq.

Real estate mogul Hui Ka Yan is the founder of Evergrande Group, one of the largest real estate developers in China. The property developer has borrowed aggressively to launch more than 800 projects across 280 cities. Hui Ka Yan has lost $1.19 billion this year so far. Notably, Evergrande Group is one of the world’s biggest borrowers. It has a long-term debt burden of $81 billion.

Yang Huiyan is the majority shareholder of the real estate giant Country Garden Holdings. She inherited the wealth from her father Yeung Kwok Keung, who transferred 57% ownership of the company to her in 2007. She is also the chairperson of Bright Scholar Education Holdings.

Ding is the founder and CEO of NetEase, one of the world’s largest video game companies. Back in 2003, he was China’s richest person and the first Internet billionaire. He is still among the richest people in China. NetEase has partnerships with the US game developers such as Blizzard Entertainment and Microsoft’s Mojang. Earlier this year, it established a Japanese studio called Ouka Studio to develop console games.

The 77-year-old billionaire is the co-founder of Chinese appliance maker Midea Group. He founded Midea in 1968 as a lid production company. Today Midea has more than 135,000 employees and 200 subsidiaries all over the world. The company also owns German robotics giant Kuka. Earlier this week, kidnappers carrying explosives broke into his villa. But Xiangjian’s son managed to escape and inform the police. The billion was successfully rescued.

Zhidong is the co-founder and former CTO of Chinese Internet giant Tencent Holdings. He went to the Shenzhen University with Tencent’s founder Ma Huateng. He is the second largest individual shareholder of Tencent. Zhidong served as the company’s CTO for 16 years until his retirement in 2014.

Pang Kang is the chairman of Foshan Haitian Flavoring & Food, one of the largest soy sauce suppliers in China. Haitian Sauce Shop was a collective where Kang worked as an executive. He incorporated it in 1995 as a limited company and invested $60,000. The company went public in 2014. Pang Kang’s net worth has ballooned from $2.5 billion in 2014 to $16.4 billion in June 2020.