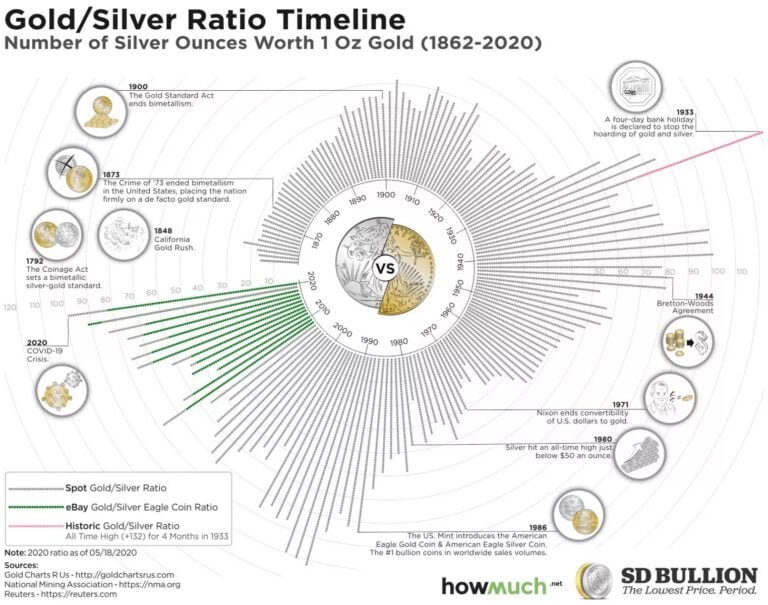 The day I was born, the precious metal silver was priced at $16.02 per troy ounce.

That was over 40 years ago now.

Now seemingly on a monthly basis, the creation of more and more trillions of our faith, credit, and military might notes are issued. See the red, blue, and black colored ‘hockey sticks’ below. 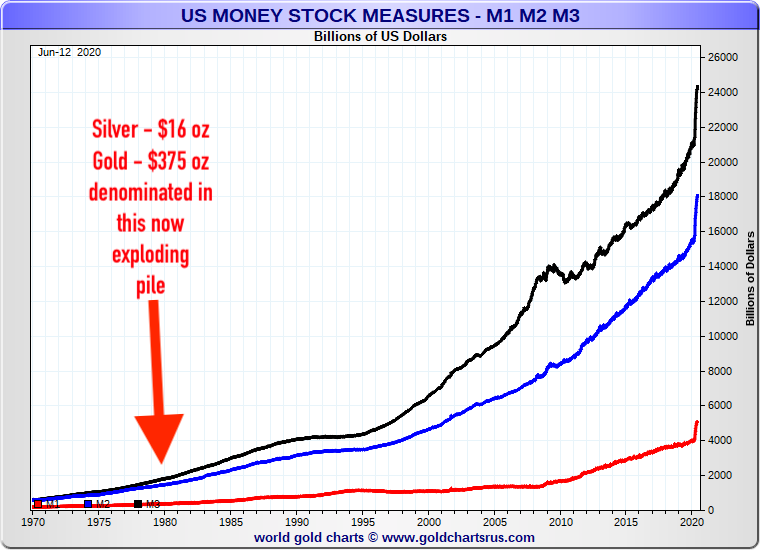 Gold Silver Ratio then 23, now near a historic high level of 100. Silver has huge upside potential.

Since the year 1980, we have seen the total fiat US dollar pile multiply 5 to over 12X in size.

The varying multiples only depend whether you are measuring with M1, M2, or M3 fiat Federal Reserve note issuance outstanding. See again the chart above to confirm that fact, and gander how exponentially all three are growing. I cannot put into words nor would our minds wrap around the size of what is happening. I’m not sure the overpaid the NY Federal Reserve could either.

Bullion is about to go way more berzerk than it did in 2011. I am betting heavily on it.

Do your due diligence, but hurry. This is not going to last much longer.

So humanities all-time historic money according to Milton Friedman have barely registered the perversion of what many now deem to be stores of value. That is not going to last with infinite QE and the ongoing fiat currency race to debase.

This past week, we collaborated with the team at How Much to bring the world a Gold Silver Ratio Chart that puts into context gold vs silver values going all the way back to the US Civil War era. 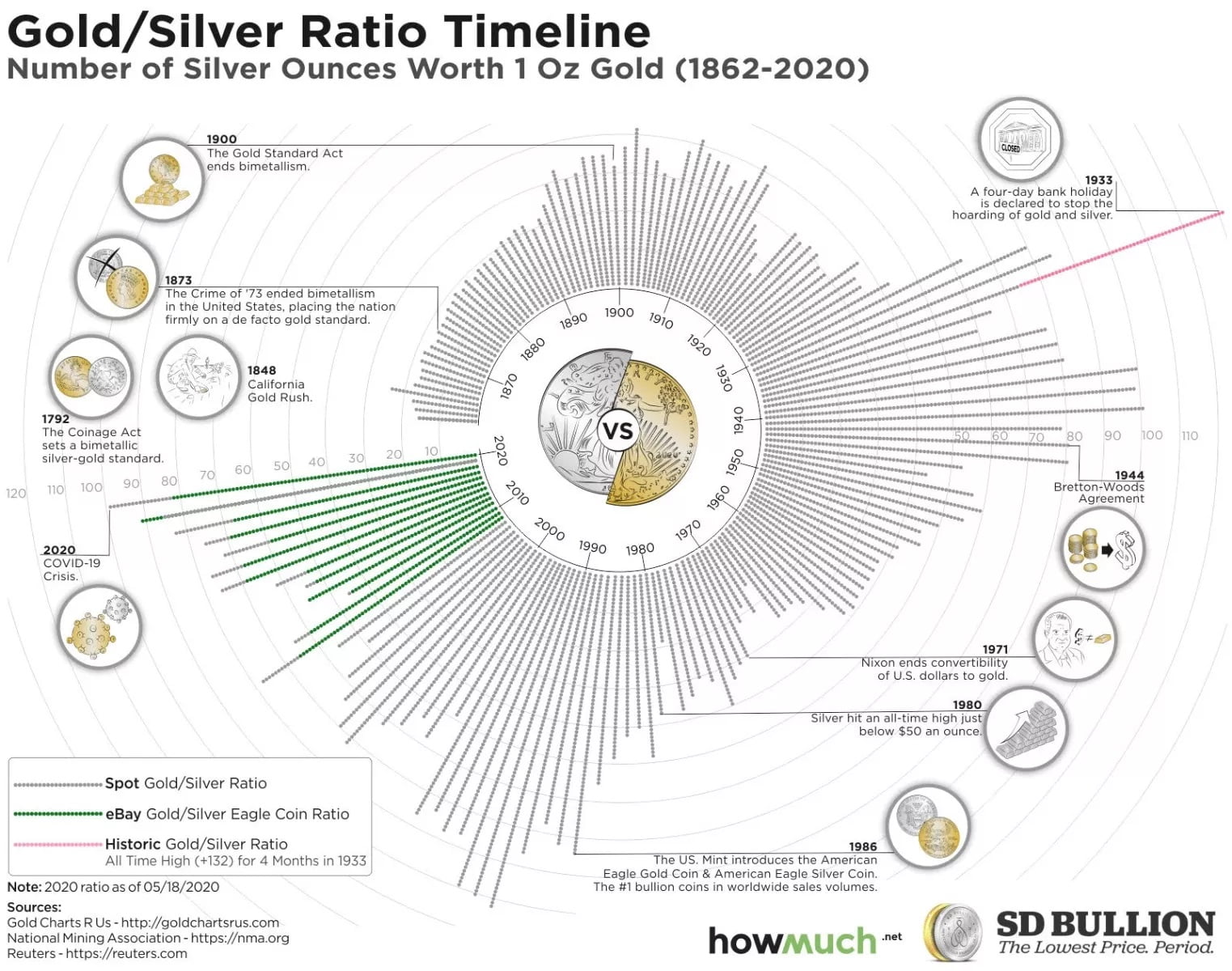 How Silver Gets Made? - Not Digitally on Silver Laced Keyboard$, No

Yea I know, I know. Stores of value come from keyboards so long as confident men say it’s so.

Many of us have been conditioned to think silver is a majority industrial metal now that it is used in the computer you’re reading this from and who cares. Well, we would basically be still living in an agrarian society without it probably still reading on hemp paper from candlelight.

In the year 1980 and in 2011, silver prices ran exponentially higher not because of the thousands of things we use trace amounts of it in and hardly recycle. But because of how dirt cheap it's been, investors can pile into silver bullion when they are worried about saving what they already have.

Today, millions of others aside from me, are actively shorting this nonsense in a safe patient way. We are making silver asymmetric bullion bets with limited downside and rip-roaring upside to come. We could never have dreamed the private Federal Reserve and the US Treasury would form their very own law side-stepping trillionaire out of nothing hedge fund, but they have. Does this make you confident in the trillions they issue and claim are money units?

You see the silver price historically rages to the upside when its monetary store of value demand flares up and overwhelms supply. When the monetary masters crank fiat currency piles to levels none ever thought possible, silver gets going.

That’s now underway in ways yet to be fully expressed by the silver spot price. But like 2009 to 2010 there is a lag. JP Morgan knows this, they almost their face to it a la Bear Sterns spring 2008.

Not only is now spiking silver demand gobbling silver bullion inventories but too, inferior derivatives are seeing record inflows of Hunt Brothers and Warren Berkshire Hathaway Buffett silver hoards. Combined over the last twelve months alone there has been approximately 230 million oz. silver inflows into four major management fee-charging ETFs. What happens when India comes back to the silver market asking for its next year of +250 million ounces?

lagged but eventually, the spot #SilverPrice will start looking like the cup formation we are seeing there too
-
re: $SLV $PHAG $ZSIL $PSLV pic.twitter.com/wMc3LtuGbF

Similar increased silver store of value buying happened in the stagflationary late 1970s and during the 2008-2011 QE1 and QE2 bailout confidence crisis phase.

These last two times silver price highs ran and peaked near $50 oz. This time, silver is triple-digit bound and that is simply based on the fiat currency creation already embedded into the financial system.

The lies we have collectively told ourselves for decades compounding are coming undone, even as many technological advances have concealed these ugly currency real value ‘shrinkflation’ truths ongoing.

Also back in late 1979, when Iran was taking US hostages in the late 1970s, gold was a bit over $375 oz. Within 3 months following, while virtually all other commodity prices were also multiplying in value, the gold price more than doubled peaking at $850 oz on January 21, 1980.

So the price of gold is currently only about two times that old 1980 high, and again the fiat US dollar pile has exploded globally. Gold has another 2.5 to 5X value upside from here based on the current fiat US dollar issuance alone, and that statement is not taking into account what more currency creation is coming in this infinite QE decade to unfold.

Since we handed team Jay Powell Steve Mnuchin a slush bucket of trillions and seemingly infinite ways to prop failing financial markets, we have run the base M0 fiat US dollar supply up over 30% in a matter of mere months. That means all the following price targets need to be boosted by the same figure (+30%).

You cannot abuse a currency system like we are actively doing, without precious metal values eventually ripping to the upside.

Fiat numeraires and derivative price discovery exchange rigging can only suspend temporarily the realities in and on the ground, and especially with waves of investor psyches losing confidence in asset classes and supposed stores of value.

Of course, our future fiat and central bank direct issued digital currencies should buy a lot less of the things that matter most. Historically though, under such currency devaluing conditions, the precious metals outperform all other asset classes in real value performance (measuring asset classes vs asset classes).

The 2020s should be bullion’s decade of revaluations sharply higher.