ValueWalk
Home Business Have the S&P 500 Bulls Convincingly Stepped Up to the Plate? 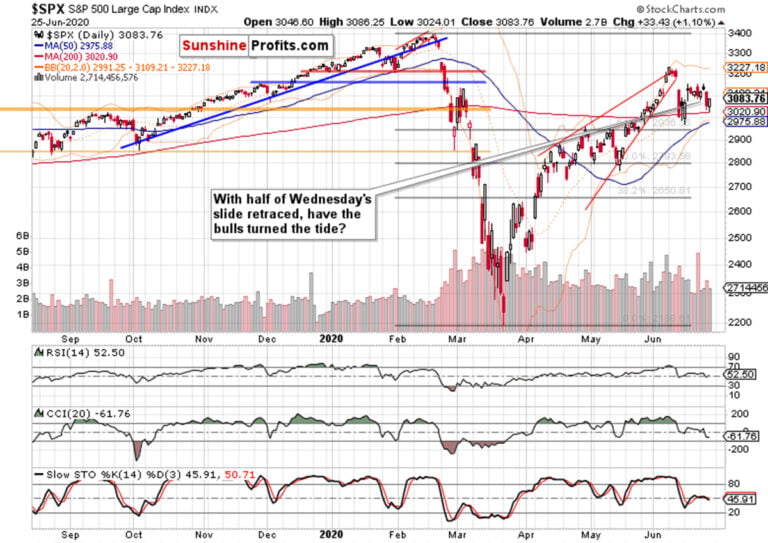 Helped by the financial sector headlines, stocks reversed higher yesterday – is the downside move drawing to a close? It might look so, but I’m not convinced yet. Despite the generally positive S&P 500 performance during the runups to Independence Day, the new Fed rules might not have saved the day yet. Trading remains choppy, corona cases just made a new U.S. daily high, and the elections are getting closer.

The quarter is ending, and that brings about portfolio rebalancing – either to lock in profits to show off Q2 performance, or keeping the percentage allocated to stocks at Q1 levels after stocks' stellar rise this quarter (in other words, selling some). Just how much have these factors been behind the very short-term S&P 500 moves? Will the bulls invalidate the bearish breakdown from last days' consolidation? 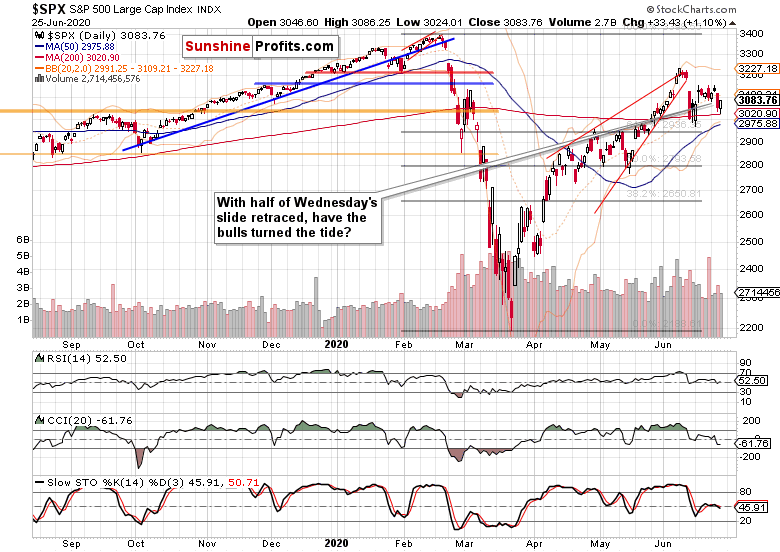 Half of Wednesday's plunge has been erased, but the volume didn't stand out on a daily basis – this could however change should follow-through buying lift prices later today.

Such were my thoughts about the daily indicators yesterday:

(…) while it's not unimaginable to see them stabilize for a few sessions, such behavior would only make the next bear raid likely.

Let's get into the catalyst of yesterday's move – the Fed's pronouncements regarding the banking sector. Unsurprisingly, banks were found to be in a strong position overall, yet Q3 dividends capped and share repurchases on hold. This piece of the puzzle has been of the buy-the-rumor-sell-the-news variety, but the intended Volcker rule relaxation really did lift the bullish spirits.

While such steps tend to boost the markets in the short run, they don't have as bullish an impact as e.g. the 2009 FASB rule on recognizing losses did. Accounting for yesterday's upswing, I view the short-term balance of forces as rather balanced.

Let's quote from the intraday Stock Trading Alert as the regular session moved beyond its first half :

(…) We're seeing a daily consolidation after yesterday's sizable downswing, and it would be yet premature to ascribe it a bullish meaning.

What are the scenarios I am looking for in the very short run? Moving back below the above-mentioned intraday mid-range (with more selling to come), or muddling through around / peeking above the upper part of that intraday range (3010 to 3050).

The narratives are still there, now also with more Texas reopening on hold.

The S&P 500 is peeking higher in today's premarket trading and trades at around 3070 as we speak, but the sentiment doesn't favor either side thoroughly as the put/call ratio's 5-day average shows. Stocks are also giving up the premium in their returns compared to bonds on a 20-day basis, which could bring us more risk-off environment over the coming weeks. If the S&P 500 200-day moving average doesn't hold, the bears' gains could become substantial.

But would it make sense to wait for the potential downside and endure more Q2 window dressing and light-volume trading around Independence Day, which is notorious for wild swings?

Let's step back and check the weekly chart – after all, today is the week's last trading day. Is it as important as the tense atmosphere suggests? 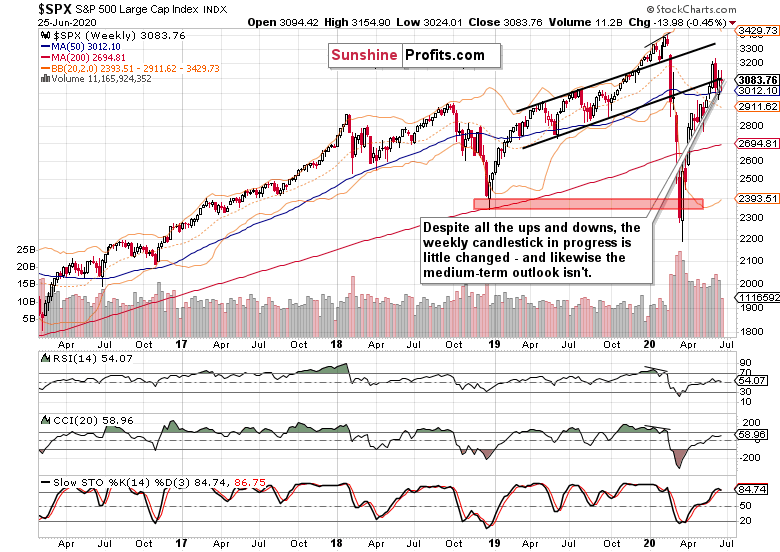 Quite some seesaw trading in the two prior weeks, with tellingly long upper knots. Should today's close not differ much from yesterday's one (or ideally for the bears, stocks move lower), we could be looking at indecision (if not outright reversal).

Just as the March volume examination showed heavy accumulation, and stock bears unable to reassert themselves right next, last weeks' trading smacks of distribution, of selling into strength. Yes, that's the result of the bulls being unable to stage a comeback this week (so far – we'll soon learn, but the odds favor a downside move).

The thorn in the bears' side is that prices are still trading above the 50-week moving average (roughly corresponding to the 200-day moving average on the daily chart, at 3010 and 3020). Breaking below this support would likely lead to accelerated selling, but we're having none of this so far.

What about the bullish side of the argument? It's about moving prices back into the rising black trend channel – again, we aren't seeing any of this.

The weekly indicators are looking fairly extended, which wouldn't be an issue – but the weakening uptrend in CCI or the RSI continuously unable to overcome its neutral readings, is.

So, these are the reasons why I think yesterday's financial sector headlines isn't a real game changer, and why I see persisting risks to the downside. True, they might not materialize in the very short run, but the reward potential is higher for the bears here, the longer the above issues persist.

Let's feel the short-term pulse of the credit markets now. 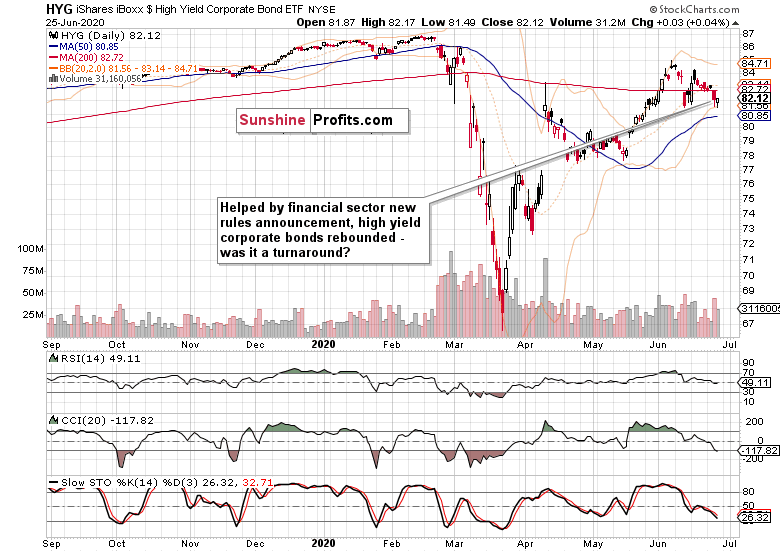 High yield corporate bonds (HYG ETF) made a U-turn on those financial sector headlines, but the upswing wasn't wildly bought. That's short-term suspicious as the downtrend of recent days hasn't been broken, and corporate junk bonds still trade precariously close to the horizontal support line made by its recent lows. 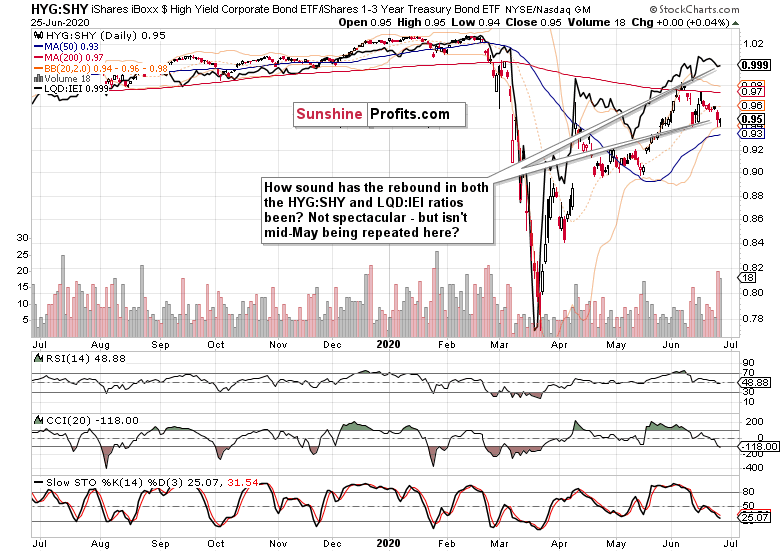 I still stand by the call for rougher trading over the summer. Look, elections are drawing nearer, the polls are showing… whatever – what would happen once the markets start discounting the prospects of Biden presidency more? Markets hate uncertainty, and the Trump years brought us many pro-business policies. Will they continue? What new ones would take their place?

As summer progresses, that could influence stocks more than corona / lockdown fears. The markets would tell us as we go. As I showed you on the weekly chart, the risks are skewed more to the downside in the short- and medium-term. 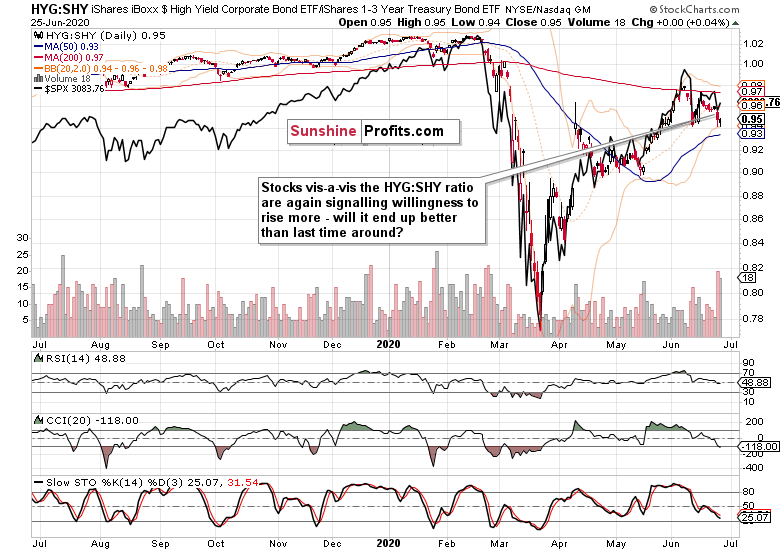 Are stocks serious about wanting to lead the HYG:SHY ratio higher? For how long would this outperformance last, and will it end up better than it did twice already in early June? Currently, I still have my reservations.

Volatility appears fighting a short-term uphill battle to me. I don't think it would stay this low in July or August. 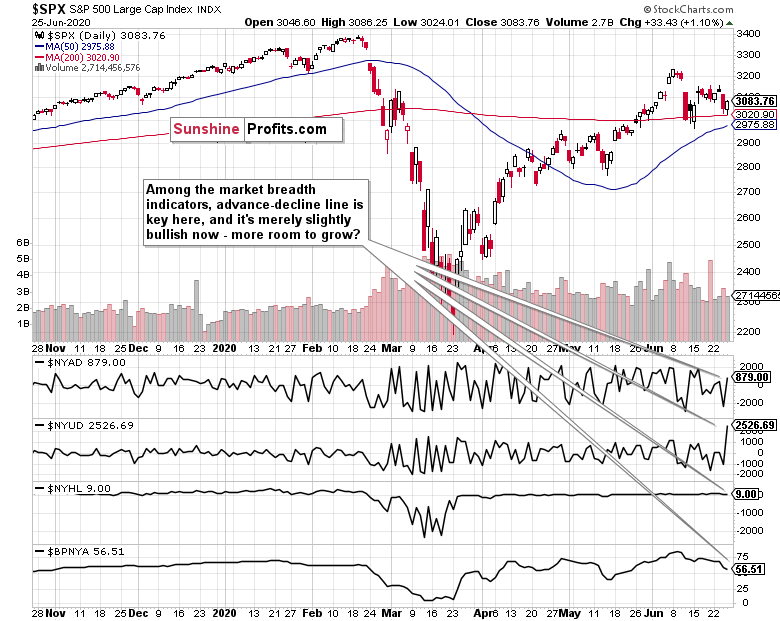 The market breadth indicators have now flipped to the bullish side in the short run, and have more room to grow. But are the bulls strong enough to achieve that? I don't see a proof for that. Conversely, I expect a more risk-off period to rule in the coming weeks, and USDX continuing its crawl higher just compounds the downside risks.

Q: What do you think of the last couple of hours price increase? Changing direction or would you see it as a fake?

A: Well, every move is real, very real in terms that it's not "on paper" but directly influences the open position if any. Whether that move is credible, is another story entirely. For the above-mentioned reasons, I think we haven't seen a real change in direction yesterday, that doesn't pass the smell test for me.

Q: I'm a little disappointed to be honest. I trade by zones, and while everything indicated another test to the 3000 zone it broke the upper zone based on the banking stress test (which i find it as an excuse for manipulation). I will switch to trade something that moves more reasonable or justifiable such as eur/usd, gbp/jpy, or usd/jpy.

A: You're right that a serious test of the 3000 area was on the cards, practically speaking. Yet, the market made a short-term turn, and you're very right in seeing the visible hand of the financial sector headlines. But has it flipped the outlook to bullish again? Not yet, as some market breadth views are the strongest indicator going for the bulls these days – but even the weekly view reveals the risk of the advance-decline line building a bearish divergence (unless stocks rally strongly today and next week, a lower high is guaranteed).

Nobody likes whipsaws, but I can assure you that short-term forex moves can deal you more of them than stocks. International money flows including currency swaps do exert much more influence over $6.5T a day market place than they do over stocks.

Summing up, the bulls awakened courtesy of the financial news announcements, but the short-term outlook remains unchanged vs. the day before. Significant short-term risks persist amid the choppy trading characterizing last two weeks. The medium-term examination favors the bears, and today's closing prices can reveal whether the time has come to really test the bulls' resolve. We're now trading at around 10% off the all-time highs, and given the prevailing narratives' trajectory, more risk-off sentiment is far from unimaginable.

The damage in credit markets isn't repaired yet, technology (semiconductors) don't outshine the rest on a short-term basis, and neither does Russell 2000. Should the market get spooked by corona even more down the road, that would be a cherry on the cake for the bears.

As the saying goes, you're on the right track with stock bulls – but stay there long enough, and you get run over – and the S&P 500 setup these days is precarious.