Prescience Point is short Enphase Energy (“ENPH” or the “Company”) because we believe the Company’s financial statements filed with the SEC are fiction.

Based on the findings of our thorough, on-the-ground investigation of Enphase Energy's India operations and our detailed analysis of the company’s accounting and business practices, we believe that at least 39%, or $205.3 million, of ENPH’s reported U.S. revenue is fabricated. Based on statements provided by former employees and other solar industry participants, it appears that the Company inflated its international revenue significantly as well. We also believe that most, if not all, of the enormous 2,080 Bps expansion in the Company’s gross margin during Kothandaraman’s tenure as CEO – from 18.4% in Q2 2017 to 39.2% in Q1 2020 - is fiction. Finally, based on their frantic and massive share sales from June 1st to June 15th, it appears that ENPH executives and board members learned of our private investigation, which wrapped up at the end of May, and are desperately trying to unload their shares before the ship sinks.

We believe government bodies with subpoena power should investigate ENPH, its independent auditors should launch an in-depth investigation of the Company’s accounting practices, and the Board of Directors should establish an independent committee to examine the findings and analyses presented in this report.

Former Enphase Energy Employee #1: The current market position attained by the company and its stellar revenues are all thanks to inflated numbers…From my vantage point, it appears that the entire efforts are on to pump up the revenues, push up the stock price, cash in and milk the cow dry, before this company too hurtles the SunEdison way towards bankruptcy….

Former Enphase Energy Employee #2: There was a strong rumor in the company last year that this growth is largely unrealistic and manipulated. The business has undoubtedly grown over the 2018-19 cycle…But most employees that I spoke to told me that the numbers just don’t add up

Former Enphase Energy Employee #3: Per the GAAP, these deferred revenues should be in the liabilities corner of the balance sheet. But what Yang and Eric under Badri Kothandaraman are doing is overstating income by treating deferred revenue as earned revenue by recognizing revenue before it is actually earned…It is like a pyramid scheme which cannot stop, and if it does, the entire accounting process will completely unravel…there were many questions I asked about the deferred revenue system which to me were appearing to be extra ordinary accounting practices……(I) was told to shut up and comply… 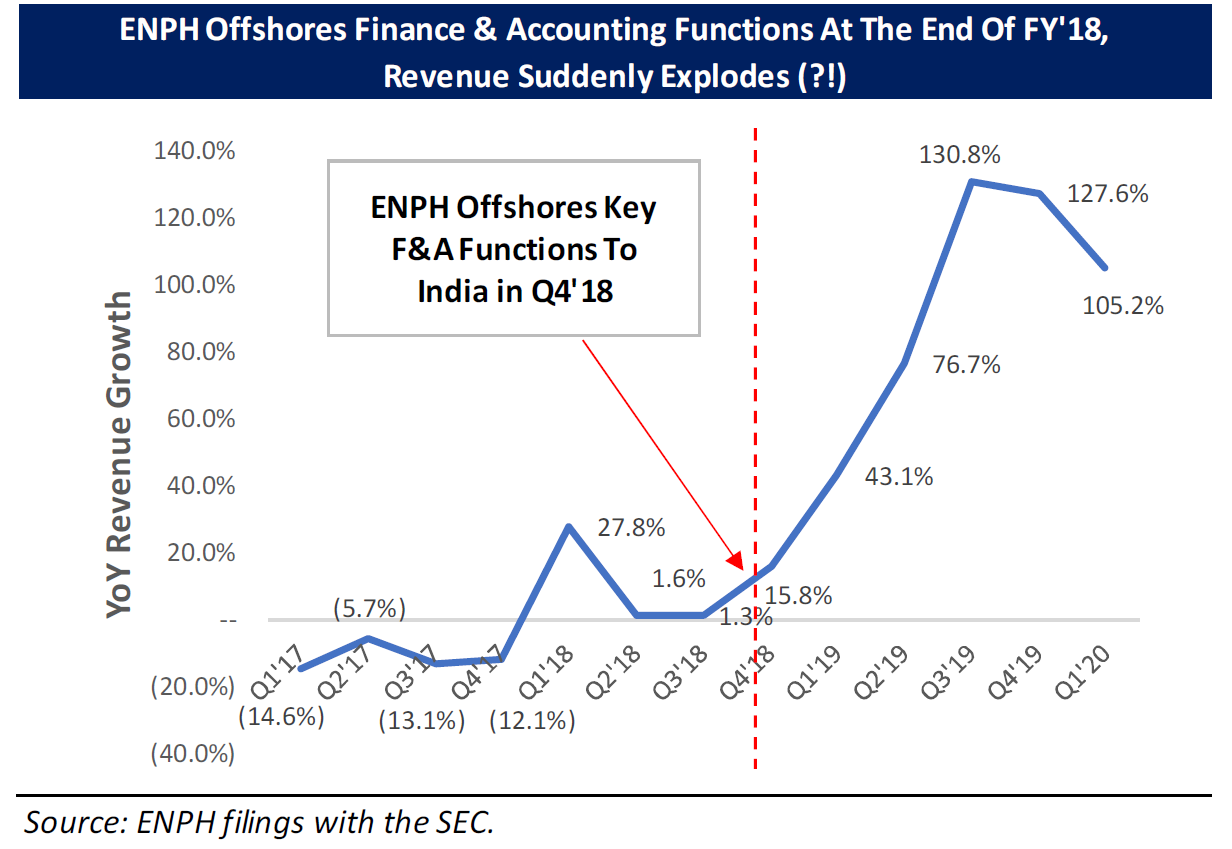 Prescience Point is short Enphase Energy (“ENPH” or the “Company”) because we believe the Company’s financial statements filed with the SEC are fiction. Based on our research, we estimate that at least $205.3m of its reported US revenue in FY 2019 was fabricated. Based on statements provided by former employees and other solar industry participants, it appears that the Company inflated its international revenue significantly as well. We also believe that most, if not all, of the enormous 2,080 Bps expansion in the Company’s gross margin during Kothandaraman’s tenure as CEO – from 18.4% in Q2 2017 to 39.2% in Q1 2020 - is fiction. We believe government bodies should investigate ENPH, Deloitte should launch an in-depth investigation of the Company’s accounting practices, and the Board of Directors should establish an independent committee to examine the findings and analyses presented in this report.

In our initial reports on ENPH published in 2018 (here, here), we provided what we believed to be proof that ENPH had used improper deferred revenue accounting to significantly inflate its reported revenue and gross margins. Unfortunately, our warnings fell on deaf ears, and in the almost two years since our initial report, ENPH’s share price has continued to skyrocket as its reported financial performance has become increasingly disconnected from reality.

A breakthrough in our research of Enphase Energy occurred in late 2019 when we were told by a former ENPH employee that the Company had, peculiarly, offshored many of its key finance and accounting (“F&A”) functions to its India-based office in late 2018. As past accounting scandals have shown, offshore entities can and have been used as a tool to help companies perpetrate fraud. Given this, and our previous reservations about ENPH’s accounting practices, we viewed this as a significant red flag that warranted further investigation.

To learn more about Enphase Energy’s India-based operations, we hired a reputable third-party private investigation firm to conduct on-the-ground research in India. During its weeks-long investigation, our private investigators spoke with numerous former ENPH employees and solar industry participants based in India. The findings of this investigation confirmed our suspicions and uncovered numerous troubling revelations about the Company’s accounting and business practices. These findings include the following:

But wait, there’s more. Our further diligence of Enphase Energy went far beyond our private investigation and included a thorough examination of ENPH’s reported financial statements and disclosures, conversations with several solar industry experts, conversations with the largest distributors of ENPH products and an examination of solar industry datasets and other online information sources. From this additional research and analysis, we uncovered multiple, additional smoking guns and numerous other red flags which, in our view, confirm that ENPH’s financials are fabricated and grossly inflated. The additional smoking guns we uncovered include,

Following the publishing of our initial reports, Enphase Energy management successfully explained away the egregious accounting issues we uncovered to its auditors, as evidenced by Deloitte’s baffling decision to issue an unqualified audit opinion in both FY 2018 and FY 2019. However, given the overwhelming evidence of fraudulent behavior presented in this report, which is backed by numerous former employees, numerous solar industry participants, a forensic accountant, and reliable third-party data sources, we believe that this time will be different, and that this sham turnaround story will soon meet its inevitable, dire fate.

We hope that current and future investors and creditors familiarize themselves with the risks we have addressed and take immediate action to preserve the value of their holdings. We also hope that the NASDAQ, regulatory agencies, and Deloitte take action to protect investors. We believe that the SEC and Deloitte should launch a full-scale investigation into Enphase Energy’s accounting and business practices.