Despite its status, policymakers in Europe, Japan, and North America (home to the vast majority of the global nuclear fleet and most mature electricity markets) have turned sour on the technology. Since the 1980s, the developed world has largely abandoned efforts to grow the reactor fleet despite the increasing need for reducing emissions from the power sector.

The prospects for new nuclear plants globally are grim. The one exception is China, where nuclear power is seen as a critical source of electricity for the future. In the world's advanced economies, some policymakers have decided to prohibit investment in new projects, others to phase out existing capacity in a progressive manner, but few, if any, envisage a long-term role for nuclear power in their energy systems.

A 2019 IEA study finds that if nuclear power only serves as a bridging fuel, addressing climate change becomes increasingly difficult and increasingly expensive. It is possible, but it makes a challenging problem more difficult. The study looks at the impact of fading nuclear power in the context of two potential low carbon energy pathways aimed at holding the increase in the global average temperatures to below 2C.

In this context, nuclear fade is defined as a forward-looking scenario in which no new nuclear power capacity is built beyond projects already under construction, no further life of plant extensions is granted, and no new investment in existing plants occurs in advanced economies. Under these reasonable assumptions (not an unlikely scenario given the current political posture towards nuclear power), the total nuclear capacity in advanced economies falls ~67% by 2040. 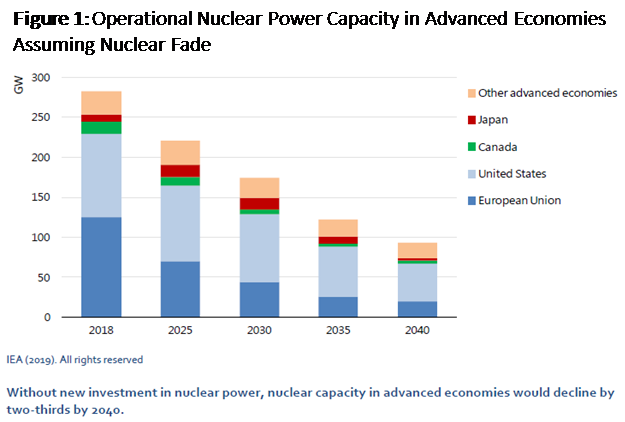 In the case of nuclear fade, the European Union sees the most significant decline in capacity in absolute terms at over 100 GW. Of the 126 reactors in operation, 89 are set to be decommissioned by 2030 without further extensions. By 2040, just 15 of the existing reactors are still in operation, complemented by four reactors that are under construction. The fade will most impact publicly traded utilities in Germany and Scandinavian countries, but most reactors in Europe are state-owned, limiting the potential impact on investors.

The decline in nuclear capacity in the United States is less severe than in the European Union as most of the fleet has received 20-year life extensions. Still, nuclear capacity in the United States would fall by half over the next twenty years. The publicly traded utilities most exposed to this decline are Exelon, who owns 21 reactors, Entergy, who owns eight reactors, and Duke Energy, who owns 11. Several utilities own two or more reactors such as Dominion, Pacific Gas, and Electric, MidAmerica, and NextEra. Utility investors should be aware that extending the life of a nuclear reactor is often the cheapest route towards maintaining current production levels. A lifetime extension for a reactor typically requires a capital investment of between $500 million to $1 billion but results in operations that produce electricity at a levelized cost of between $40 and $55 per MWh, making it competitive with most new-build generation projects.

Cost to Consumers and Increased Cost of Addressing Climate Change

A sharp reduction in nuclear power output in advanced economies may increase the use of natural gas and defer the retirement of coal power. Estimates suggest that coal generation may increase by 4% and natural gas generation by 7%. If true, the incremental CO2 emissions between 2020 and 2040 would be equivalent to the CO2 emissions from China's entire power sector in 2018. To fill the capacity gap in a nuclear fad scenario, $210 billion of new investment in power plants and $120 billion in grid connections would be required. This is $340 billion in new investment to fill a capacity gap that could be covered by spending $170 billion to extend the useful life of the nuclear fleet.

In addition to upfront capital costs, the ongoing costs of production may also prove more expensive.The IEA estimates that the additional cost of supplying electricity in a nuclear fade environment would be $40 billion a year on top of the additional Capex, an additional expenditure mostly derived from the cost of fuel. This would translate into an average 3% increase on consumer's electricity bills.

The cumulative cost of supply would thus be more than $1 trillion higher should a nuclear fade occur then if it did not. This is $1 trillion that must be offset by higher electricity costs for consumers, an increase in debt for corporates or governments, and represents a significant use of capital over 20 years that could likely be spent better elsewhere.

Battery storage will play a role in increasing the flexibility of renewables, but there is little evidence to-date that current storage technology is cost competitive with incumbent generation. In the interim, the result is that natural gas generation must increase. As Figure 2 shows, the potential additional natural gas capacity may be significant.