ValueWalk
Home Economics How Did The World’s 2,095 Billionaires Join The ‘Three Comma Club’? Time to a Billion – How Did The World’s 2,095 Billionaires Join The ‘Three Comma Club’?

A billion dollars takes an immense amount of dedication and hard work, but what about time? Even the world's richest people, such as Jeff Bezos and Bill Gates had to start somewhere, but just how long did it take them to earn their first billion dollars and break into the elusive 'three comma club'?

Blue Eagle Capital Partners was down 7.71% net for the first quarter after averaging net market exposure of about 30%. The fund's goal is to "preserve capital and deliver superior risk-adjusted returns across a wide range of investing environments." Q1 2021 hedge fund letters, conferences and more Thus, fund management is frustrated by their first-quarter Read More

How Did The Billionaires Join The Three Comma Club

The team at OLBG have compared the journeys of the world's richest self-made billionaires to discover how and when these industry moguls hit the big $1 billion mark.

There are currently 2,095 billionaires in the world; combined, they are worth $8 trillion dollars. When we look at the past landscape, there are almost ten times more billionaires today than there were 25 years ago, however, in the last two years, the number has actually dropped.

In 1995 there were 289 billionaires in the world, and in just one year, this number rose to 423. In ten years, this number increased to 620 and as the years have gone on, the number has steadily risen. There was a peak in 2018 of 2,208, but since then, this number is seeming to slowly decline.

The data reveals that the average time taken to hit the $1 billion mark was 21 years old. The quickest to hit the milestone was eBay founder Pierre Omidyar who started the company in 1995. When the company went public three years later, his net worth soared into the billions. His real time net worth (as of 19/06/20) is above $16 billion. After founding the online auction firm, he bought online payment company PayPal and spun it off in 2014. Since raking in the billions he has put billions into impact investments and nonprofits to tackle global problems.

The billionaire who took the longest road to the prestigious status was Singaporean paint magnate Goh Cheng Liang. He opened his first factory way back in 1955 yet didn't make his way onto the Forbes Billionaires List until 2014 - 59 years later. The majority of his wealth comes from Japan’s Nippon Paint Holdings which is now the fourth largest paint manufacturer in the world. Nippon Paint acquired DuluxGroup in 2019, which is Australia's largest paint manufacturer.

When looking at the top 100, the research reveals it took on average, between 11 and 30 years to earn a billion. Only four took 40 years or more and 16 reached the figure within ten years or less.

Time To $1 Billion By Industry

Looking at the industry split, it was those in the tech industry that made their billions the quickest, taking a mere 11 years to hit the huge milestone. This includes the likes of Mark Zuckerbug, Larry Page, Jeff Bezos and Elon Musk. On the other hand, those in more traditional industries such as construction, engineering and manufacturing took the longest with an average of 34 years. Just behind the technology sector is metals and mining, taking an average of just 16 years to hit the milestone.

Many of the technology companies in recent years have disrupted the market, with Jeff Bezos topping the list for net worth for his Amazon venture. He started his tech journey in 1994 and earned his first billion in 1999, taking him just five years to become a part of the three comma club, with a current net worth of $113 billion. Bill Gates is runner-up when it comes to tech earnings, with a 2020 net worth of $98 billion, however, this took him 12 years to claim the status - more than double the time it took Bezos. It took Facebook founder Mark Zuckerberg just four years to join the billion dollar club.

Time To $1 Billion By Country

When looking at the countries where these billionaires reside, it seems citizens of Russia made their first billion quicker than any other billionaire from another country. Most of the big money-makers from Russia have made their billions from metals, mining, energy and oil. There are a total of 12 billionaires in Russia, including majority stakeholder in fertiliser producer Eurochem and coal energy company SUEK, Andrey Melnichenko. His companies employ more than 100,000 and have invested over $21 billion into fertiliser and coal production over the last 15 years.

On the other hand, Singaporeans took the longest, with an average time of 42 years to earn their first billion. This includes Zhang Yong, China’s richest restaurateur. He is the chairman of Sichuan hot pot chain Haidilao which went public in 2018. Haidilao now has over $17 billion in sales alone from the 466 restaurants which are in China, the US, Japan, South Korea and Singapore. Whilst he is one of the world most renowned billionaires, Zhang never finished high school and even said he didn't know how to prepare a typical Sichuan hot pot when he first started. 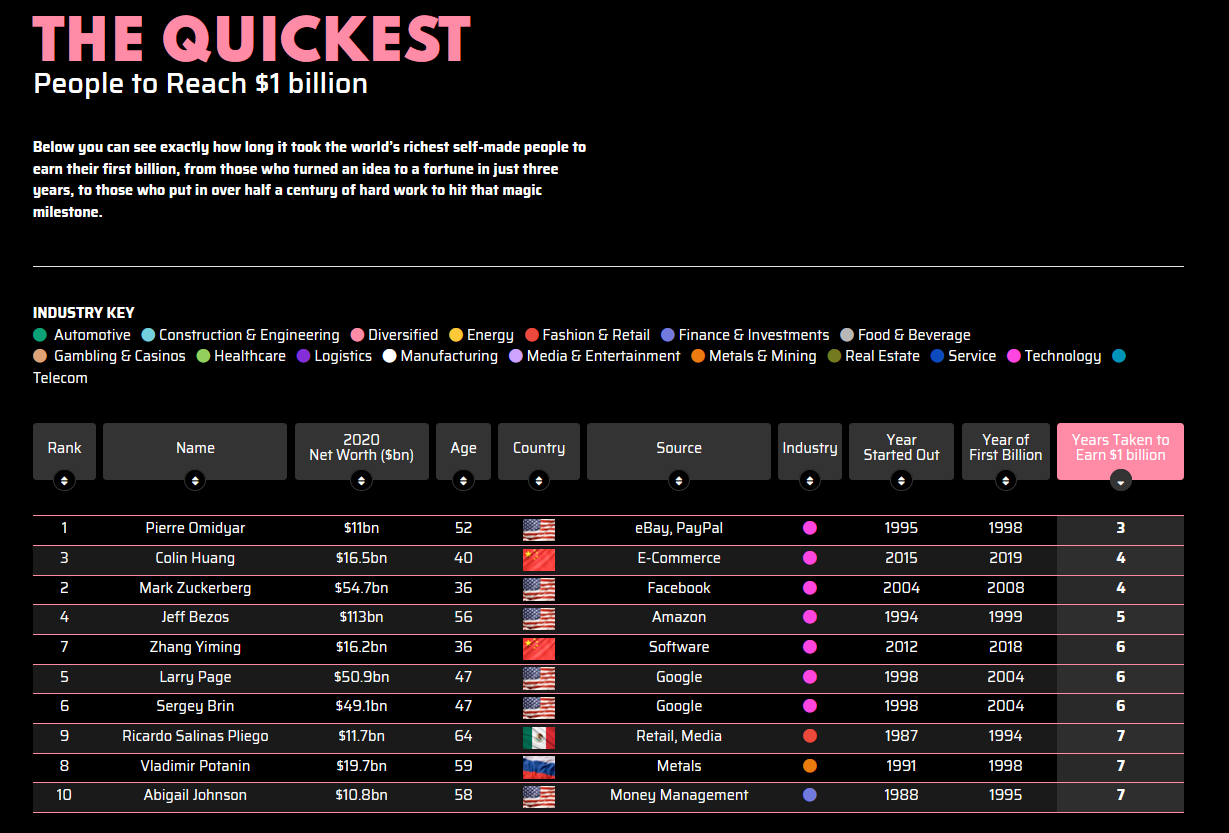