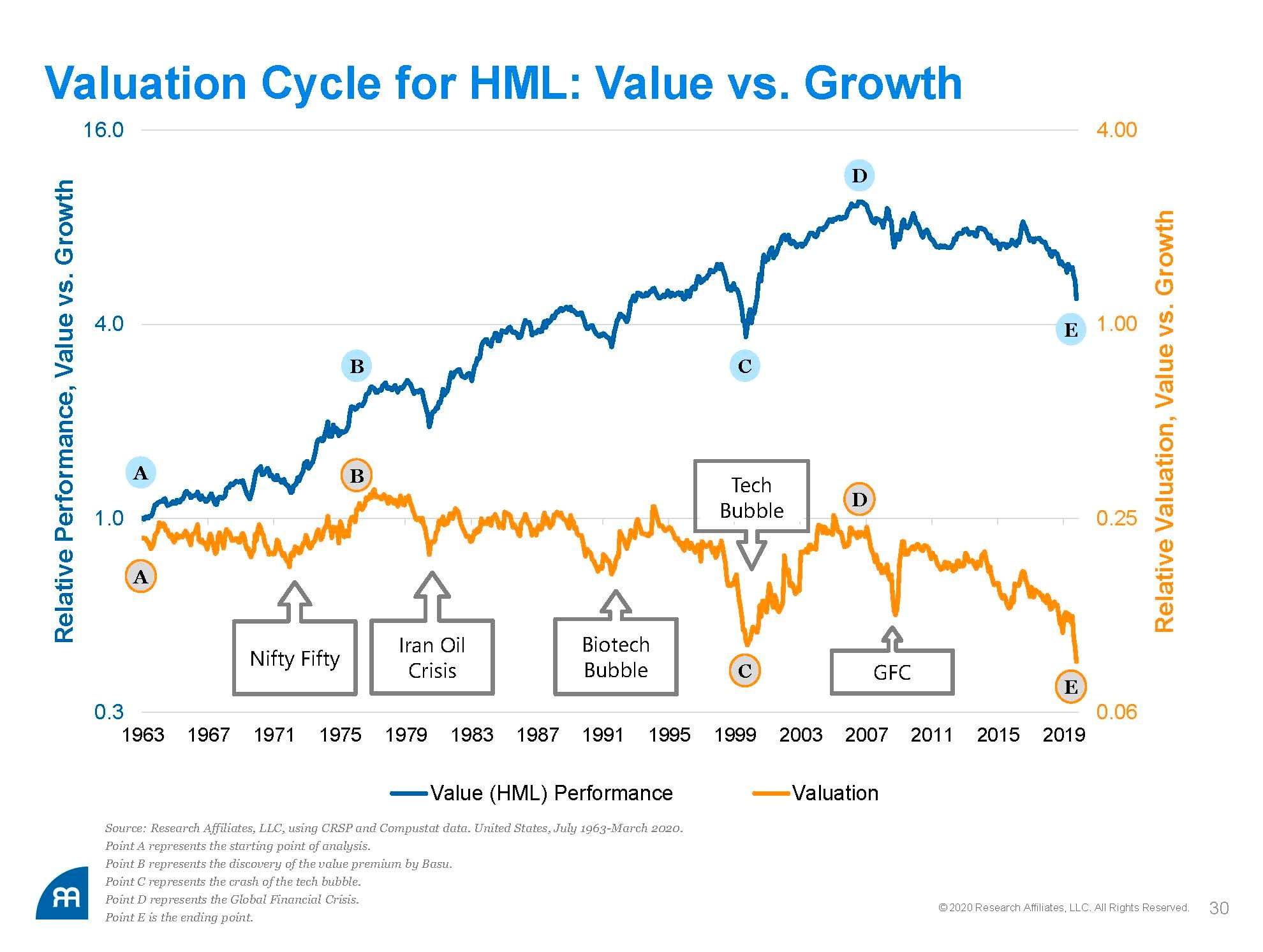 Up through the end of 2006, one of the most widely reported results in empirical studies of investing was the so-called “value effect” which stated that value stocks tended to outperform growth stocks.  As a quick review, a growth stock is one for what the price is high relative to measures such as book value or earnings.  The reason for the high multiple is future expected growth.  Investors will pay more for a dollar of current earnings if those earnings are expected to grow.  Amazon and Netflix are current examples.  A value stock is just the reverse.  The price is low compared to book value and earnings because the company is assumed to have few growth opportunities.  Ford is a current example.

The “value effect” was documented worldwide.  It was so widely accepted that Nobel Prize winner Eugene Fama and his colleague Kenneth French developed an asset pricing model which incorporated a value risk factor, that they called HML, to explain why value stocks had so consistently outperformed.  HML (High book to market ratio Minus Low) tracked the return on a portfolio that was long value (High book/market) stocks and short growth (Low book/market) stocks.  They felt that the premium provided by investment in value stocks, as measured by the return on the HML portfolio, was sufficiently large that it must be due to a theretofore unappreciated risk of investing in value stocks otherwise why would investors fail to reap the benefit and thereby eliminate the value premium.

The big surprise was that beginning in January 2007 things suddenly changed.  Over the next twelve years, and right up through the current Covid-19 crisis, value stocks have underperformed the market in general and growth stocks in particular.  It has been a long winter for value stocks.

The Long Winter For Value Stocks

The preceding chart is backward looking, a question of more immediate interest to investors is, what does the relative pricing of value stocks imply going forward?  Research Affiliates also addressed that question.  They examined the performance of value stocks relative to growth stock in the recoveries following previous major bear markets.  The results, in the table below, show that not only did value stock do well in the two years subsequent to the bear markets, they significantly outperformed growth stocks.  This is consistent with the preceding chart because during each of these recoveries, the relative pricing of value to growth improved (the orange line rose).  For instance, during the collapse of the tech bubble and the subsequent recovery value stock outperformed growth stocks by a remarkable 74 percentage points.  Research Affiliates argues that if that were to happen again and relative prices of value stocks were to revert to something close to their long-run average, value investors would reap a significant windfall. 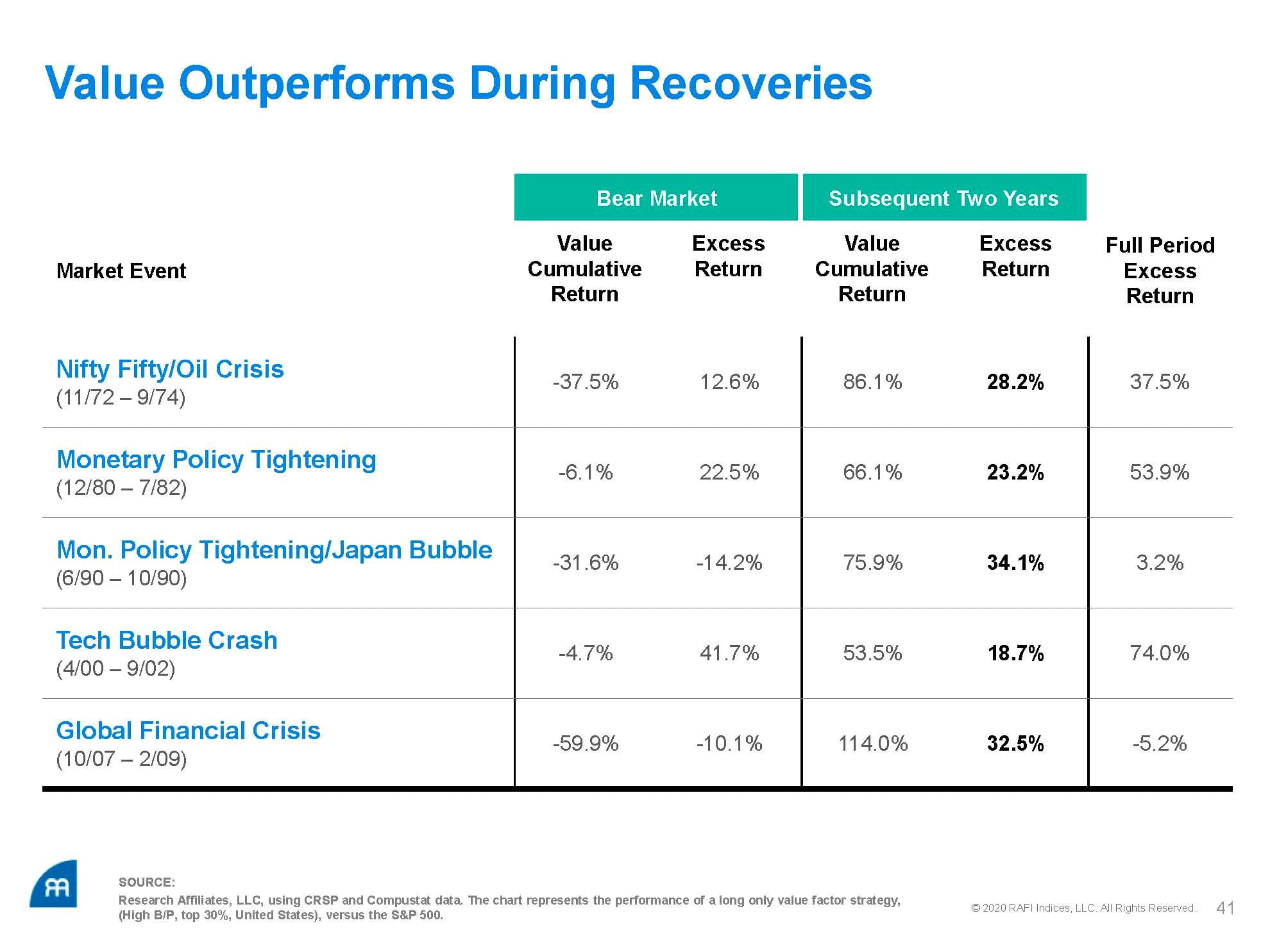 The foregoing seems to scream buy value stocks now but wait a minute.  Although not quite as extreme as it is today, the relative price of value stocks was depressed before the virus crisis hit.  In fact, it was depressed at the start of 2019 before the sharp appreciation of the market and the further widening of the spread between value and growth stocks.  Why won’t the future be more of the same?  Isn’t it possible for growth stocks such as Amazon, Facebook, and Google with all their opportunities and market power will continue to outperform value stocks?  The simple fact is that this indeed could happen.  If that were not the case, if it were obvious that value stocks were a superior investment, sophisticated investors would be piling in now and the prices of value stocks would be rising sharply – which they are not.  In fact, Warren Buffett the world’s greatest value investor is still largely sitting on the sidelines with a hoard of cash that has now grown to $137 billion.  Such uncertainty is what makes investing both interesting and challenging.