State pension funds have long been struggling with unfunded liabilities. Moody’s Investors Service updated the issue for several states to illustrate the wide range of problems facing them. 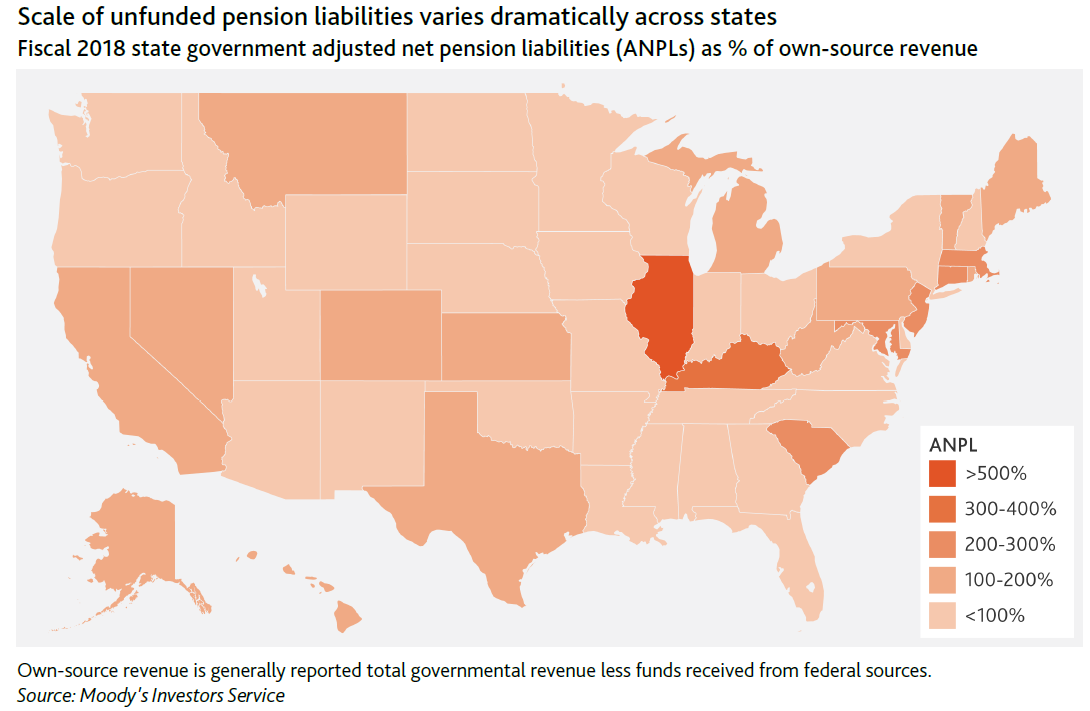 Most other states are in a good position as far as their unfunded pension liabilities go. Other states with potentially serious issues in unfunded liabilities include Kentucky, New Jersey, Massachusetts, South Carolina, Maryland and Connecticut.

Moody's also highlighted other problems facing state pension funds. The firm looked at two states with "low pension risk." Tennessee has enacted reforms to shift investment performance risk to new employees, providing a long-term buffer against unexpected increases in pension costs. The state's adjusted net pension liabilities to gross state product ratio is at 2%. The State of Tennessee's pension asset shock indicator is at 0%, but some cities, like the Metro Government of Nashville-Davidson and the City of Memphis, have double-digit shock indicators.

Wisconsin is also listed as having low pension risk for its state funds. Most of pension liabilities are held by the Wisconsin Retirement System, and it's comparatively well-funded due to some risk-sharing features, the firm said. The state's adjusted net pension liabilities to gross state product ratio stands at 3%. There is a wide range of risk within Wisconsin as well. The State of Wisconsin's pension asset shock indicator is at 5%, but the City of Milwaukee's indicate stands at 26%, while Milwaukee County's indicator is at 18%.

New York is also at a "moderate pension risk level," Moody's said. Pension asset volatility risk is a problem for the state, as it's compounded by strict legal protection of benefits. Many local governments throughout the state also have unfunded other post-employment benefit liabilities.

At the opposite end of the spectrum are states like Connecticut, which Moody's lists as having "high pension risk." The firm said Connecticut's balance sheet leverage is among the highest of all the states, and it's mostly due to unfunded retirement benefits. The adjusted net pension liabilities versus gross state product ratio is at a staggering 23%, compared to California's 8% ratio, for example.

Illinois state pension funds are also at high risk, according to Moody's. The fund said Illinois and many of its local governments have racked up very high unfunded pension liabilities. What makes the situation even worse is the fact that they have very little legal flexibility to alter benefits and fix the problem.

Illinois' adjusted net pension liabilities to gross state product ratio is 28%, which is even higher than Connecticut's. The State of Illinois has a pension asset shock indicator of 7%, compared to Chicago's 2% indicator. Cook County's shock indicator is at 14%.

Michigan's adjusted net pension liabilities to gross state product ratio is lower than the other states that are at high risk, at 7%. The state's pension asset shock indicator stands at 5%. The City of Detroit's shock indicator is at 17%.