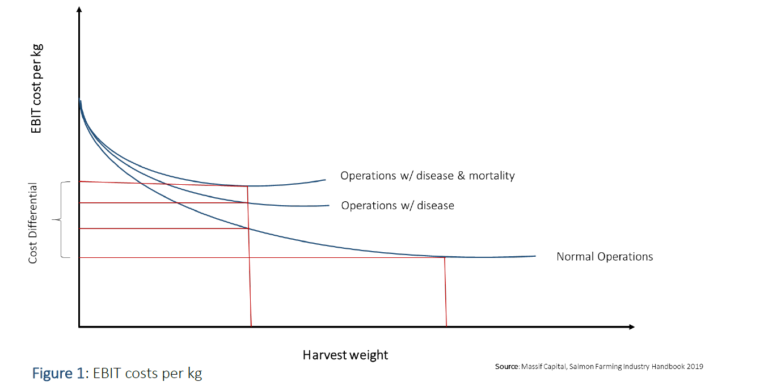 To suggest that this year has been a difficult one for capital allocation would be an understatement.  The volatility of equity markets has been dramatic, and the dissonance between the economy and financial markets appears to be reaching unprecedented extremes.  Despite these challenges, there are still opportunities to deploy capital into reliable businesses at attractive prices.

Although we favor adding more short exposure to the portfolio at the moment, we cannot pass up opportunities to add businesses like Bakkafrost to the long book.  Companies like Bakkafrost are becoming increasingly rare in a world obsessed with debt fueled growth.  Not only is there significant alignment of interests between investors and management, but this family-run firm has multi-general time horizons and deploys capital, consistently, at sustainably high rates of return.  In a world increasingly obsessed with "ESG" companies, the opportunity to buy Bakkafrost, a genuinely sustainable, environmentally friendly, and rigorously governed business at roughly half its intrinsic value is not to be passed up.

Bakkafrost P/F (BAKKA) is a premium grade salmon producer based in the Faroe Islands. Located 200 miles northwest of Scotland, the Faroe Islands are an ideal archipelago to farm North Atlantic salmon. The characteristics of its ecosystem are unique, and the regulations in the region are supportive of sustainable farming. Combined, these factors create a high return fish farming environment that BAKKA's management team has taken advantage of to create a business with a durable moat. Over the last ten years, management has demonstrated not only superior capital allocation acumen but also the prospectivity of the region for salmon fishing by growing operating income at a CAGR of 18%. During the recent market sell off, BAKKA's share price fell 36% during the three-week period from February 21st, 2020, and March 12th, 2020, erasing $1.3 billion USD in market value. The downward movement in the stock price has created an opportunity for investors to buy into an industry leader at a discount of ~55% to the value of the firm.

BAKKA is a family owned and operated business founded in 1968 by the father of the current CEO. Collectively, the Jacobsen family owns 19% of the firm. As a successful family-run business, BAKKA exemplifies many of the qualities we find attractive as investors: an alignment of owner and manager interests, the presence of multigenerational time horizons, and the implementation of a value-based system versus a resource-based system. In many regards, BAKKA is a perfect case study of these traits.

BAKKA is unique in the industry because they compound their strengths. Inherited, or developed, the firm has a portfolio of differentiated assets that they continually monetize to generate superior returns on an absolute and relative basis. The asset differentiation begins with the ecology and the regulatory environment of the Faroe Islands, which creates a profitability profile that is both sustainable and un-matched in the industry. When these factors are combined with a prudent but aggressive owner/operator that continually reinvests in the business, the potential for organic value growth is significant.

At present, the market price reflects a belief that either a) this sequence of traits is inaccurate, or b) the pandemic has permanently changed their business model and competitive advantage. We find few scenarios to support either claim.

The salmon farming production cycle lasts about three years. Eggs are fertilized, and the fish are grown to ~100-150 grams in a controlled freshwater environment for the first year of production.3 The fish are then transported to seawater cages where they are grown to 4-5 kg over 12-24 months. The growth of the fish relies heavily on seawater temperatures, which vary by time of year and region. The optimal temperature for Atlantic salmon is between 8-14 °C. Higher temperatures increase the risk of disease, and lower temperatures, usually below O°C, will kill the fish. Both scenarios cause growth rates to collapse. Farms also require a current. Like temperature, the optimal range is narrow. Ideal current flows are often in waters protected by archipelagos and fjords, which eliminate many coastlines that sit within the requisite temperature latitudes.

The salmon are then sold by weight, and the growing conditions heavily influence the ultimate weight of the fish—consequently, the weight of the fish matters for a producer's cost structure. Costs per kg harvested decline with increasing weight and rise with sub-optimal weight. 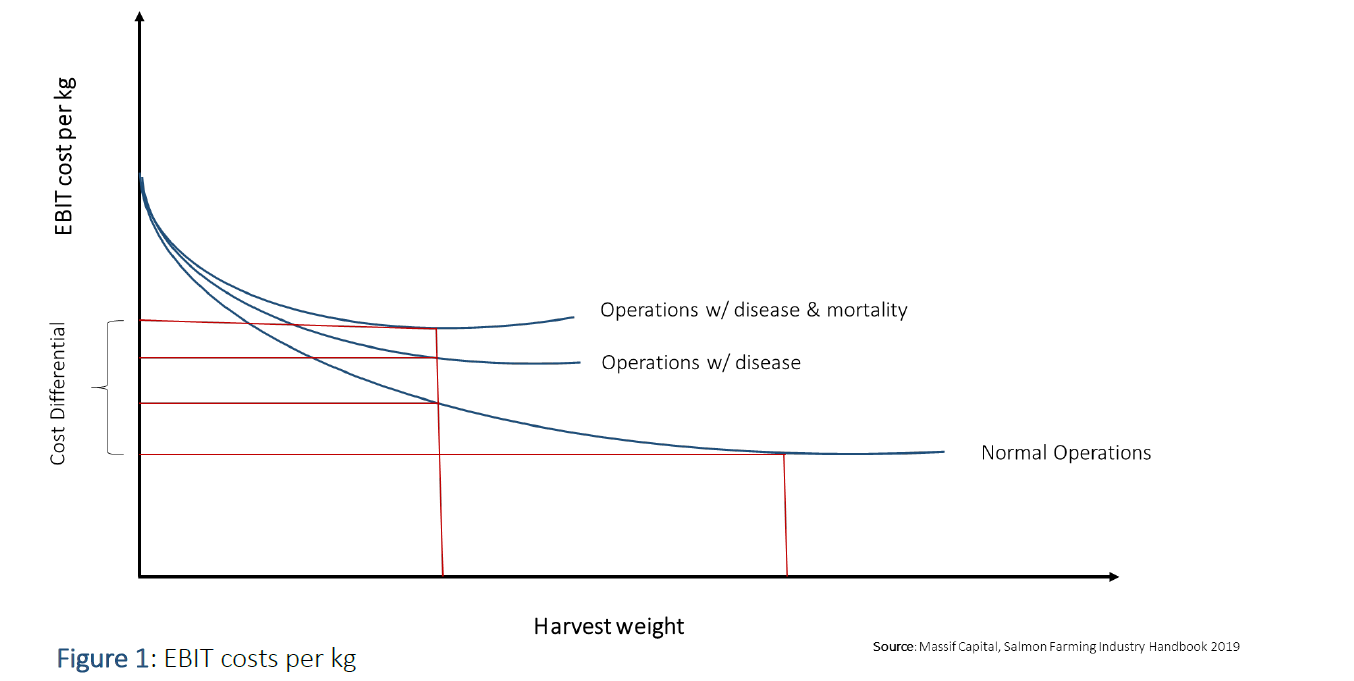 The waters off the Faroe Islands provide excellent conditions for growth. They sit within an ideal temperature range with minimal volatility, and the land separation between the fjords creates sufficient currents. Compared to their neighbors to the east (Norway), the biological parameters of the Faroe Islands are remarkable. Not only are mortality rates for BAKKA often half that of the Norwegian producers, but harvested weights are also 15% higher (See Figure 2 below).4

BAKKA also benefits from a highly favorable regulatory environment. Of the major countries that farm salmon, smolt yields5 have been relatively stable over the last two decades except for Chile and the Faroe Islands, both of which experienced disease outbreaks in the early 2000s.6 It's important to point out that ideal growing conditions do not necessarily reflect an environment with zero biological risks. However, regulations that govern a body of water can be an important factor in minimizing the future risk of a disease outbreak.

The Faroe Islands responded to the crisis in the early 2000s by instituting a completely revised regulatory framework that has contributed to a healthier operating environment (from the perspective of potential disease), reduced production losses and resulted in the subsequent rise (and now dominance) in yields over the last 20 years. Since 2006, the smolt yields in the Faroe Islands have been unmatched. (See Figure 3). 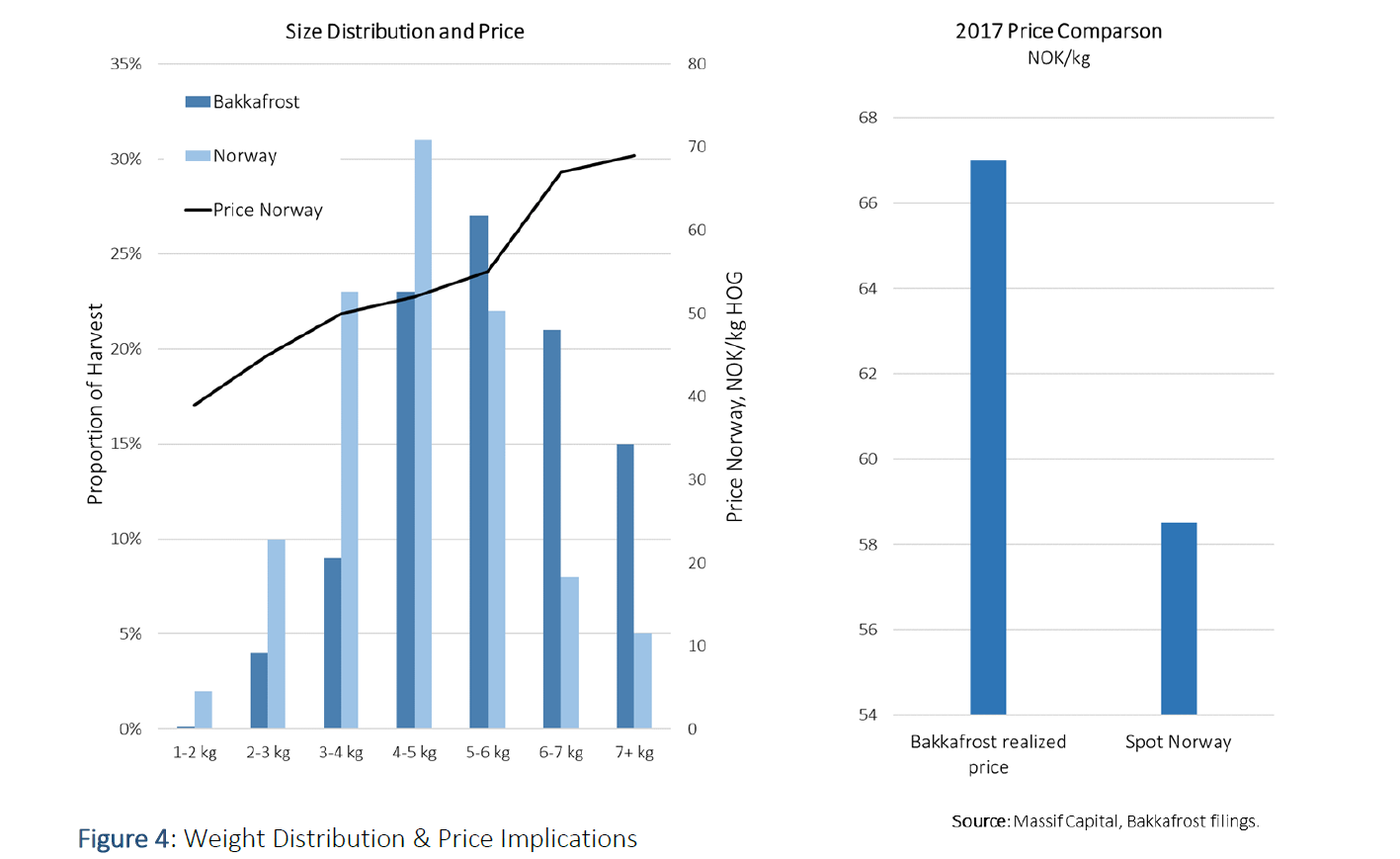 Faroese regulations now break farm territories into production zones with limited overlap, and each territory has the autonomy7 to adjust their production cycles. Following the disease outbreak, the industry consolidated to three producers who now coordinate on unregulated matters, which is critical to avoid overfarming.

Sustained weight advantages paired with lower losses have contributed to the positively skewed salmon size distribution, which has, in turn, led to higher realized prices for the company. Figure 4 below shows that the average weight of salmon harvested by BAKKA is significantly higher than the average weight of a Norwegian producer salmon. In general, the higher the weight, the higher the price. In 2017, this weight distribution characteristic translated into a 15% price premium for BAKKA against spot prices for Norwegian exported salmon. Over the last decade, BAKKA has consistently realized between a 13-33% price premium over a blend of global spot prices. 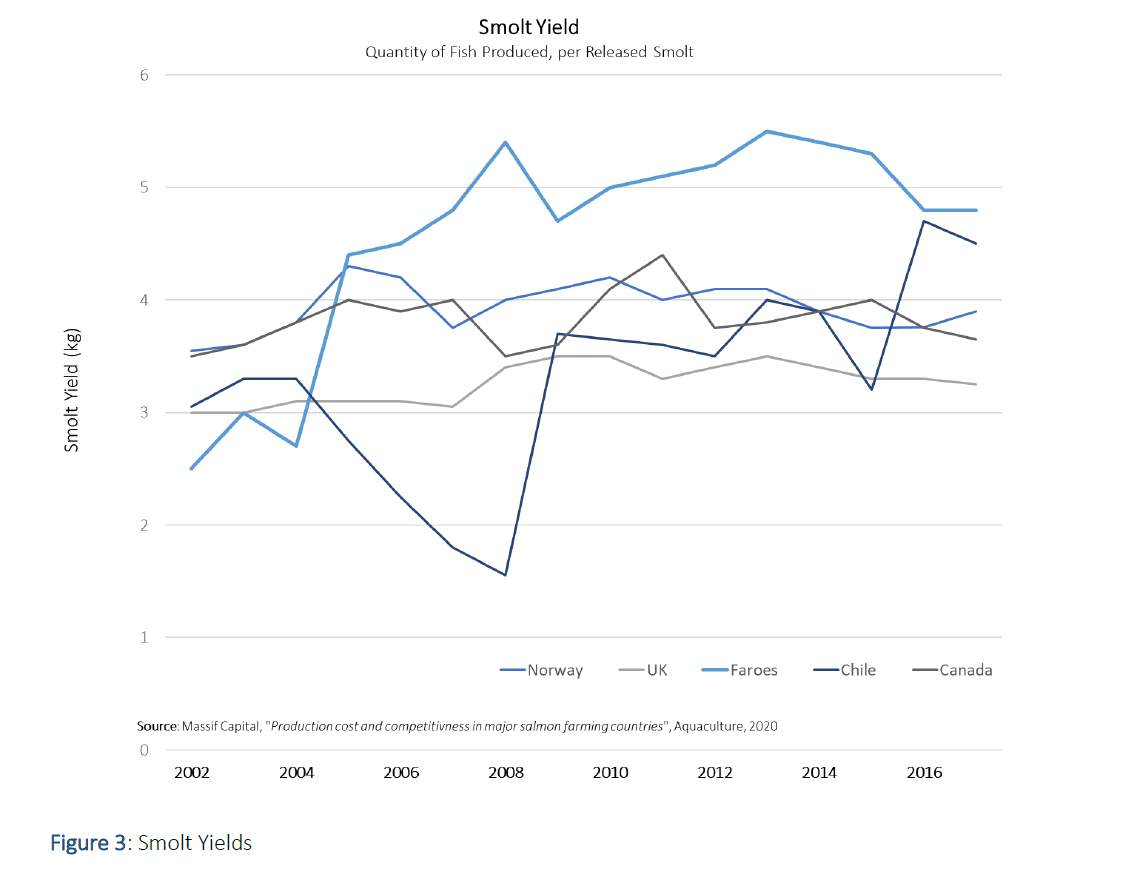