ValueWalk
Home Info-Graphs Gender Diversity And Equality In The Workplace

Gender diversity and equality in the workplace is a persistent issue in our country. However, pay disparities across genders are only one aspect of a larger problem. Understanding how gender roles function in the workplace setting is more complex than simply viewing individual pay scales. Other issues, like safety, job satisfaction, performance, and even emotional issues are equally important to understand.

The Interview Guys recently conducted a survey of over 1,000 full-time employees across the country who fell into one of four main groups:

They set out to discover what insights could come from analyzing these different gender scenarios by looking at everything from on-the-job productivity to satisfaction in common areas of work. While some employees and business owners might not believe gender differences in the workplace matter, others definitely do. Here’s what they found out. 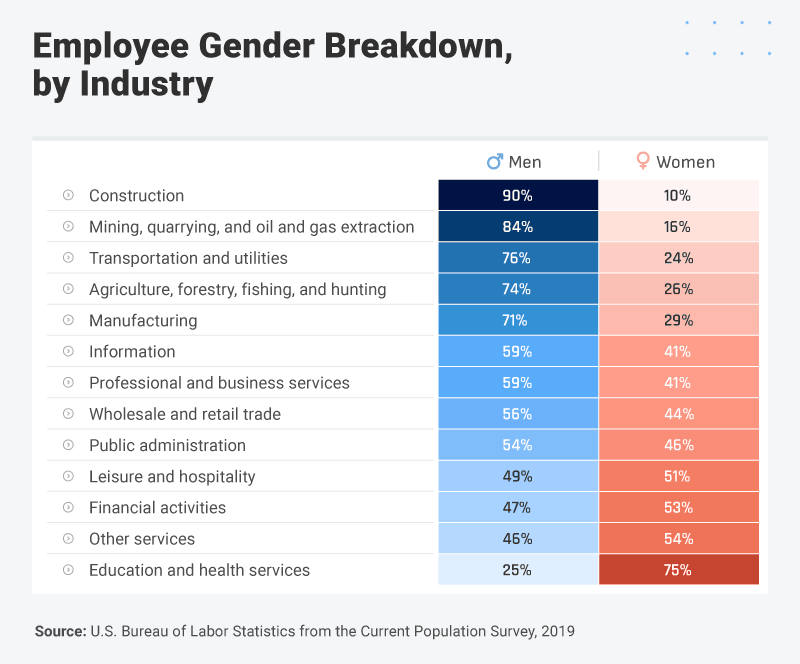 First, the team pulled data from the U.S. Bureau of Labor Statistics to better understand which industries were primarily dominated by one specific gender.

After pulling the data, they found men dominated jobs involving physical labor, specifically in the fields of construction, mining/quarrying, transportation and utilities, agriculture/forestry/fishing and hunting, and manufacturing. Women dominated the industries of education and health care services.

Traditional office jobs, such as professional consulting and business services were split fairly evenly between the genders. Even IT jobs, a formerly male-dominated industry, had a healthy split between the sexes (59% male, 41% female). 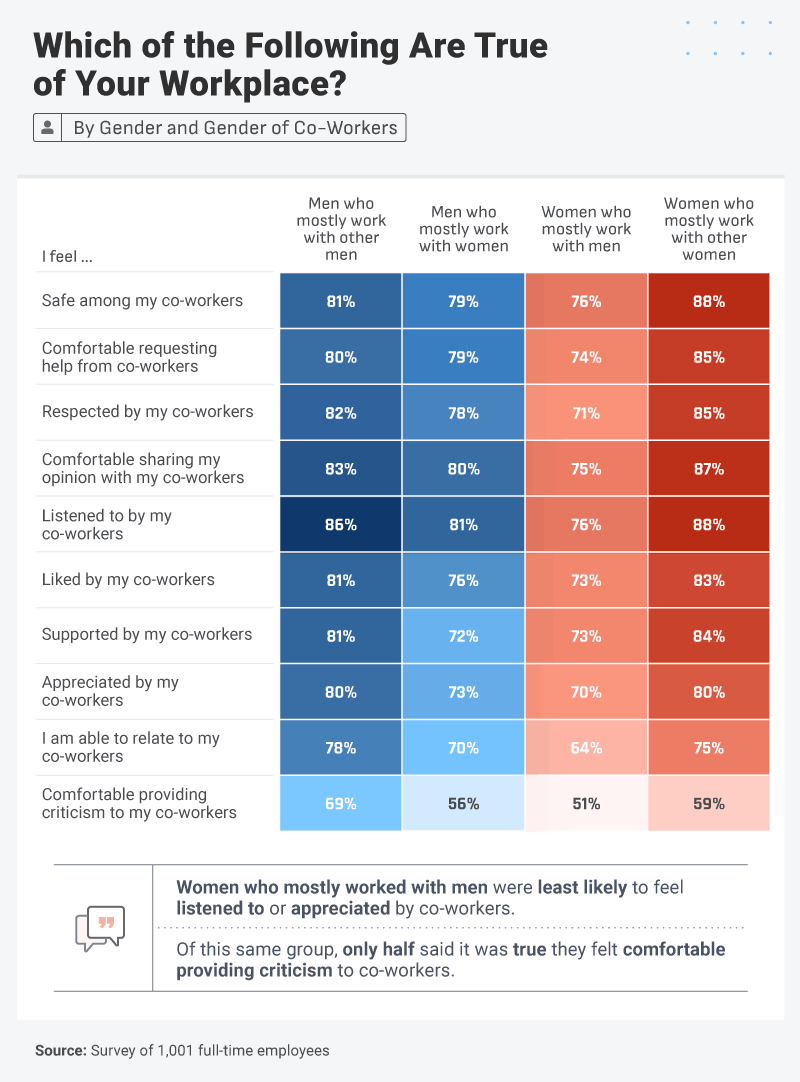 Feeling Safe and Comfortable in the Workplace

Men and women in offices dominated by the opposing gender also felt less comfortable providing criticism or feedback to co-workers. While this factor might be overlooked by some business owners, encouraging constructive criticism in the workplace can make for a better understanding of what employees are doing well and what they might need help with.

Overall, women who worked in male-dominated workplaces felt less heard and listened to by their male counterparts, whereas men in female-dominated workplaces felt less supported by their co-workers. This could be a major issue in overall job satisfaction, since developing friendships or working relationships has been positively linked to overall fulfillment in the workplace and higher employee retention. 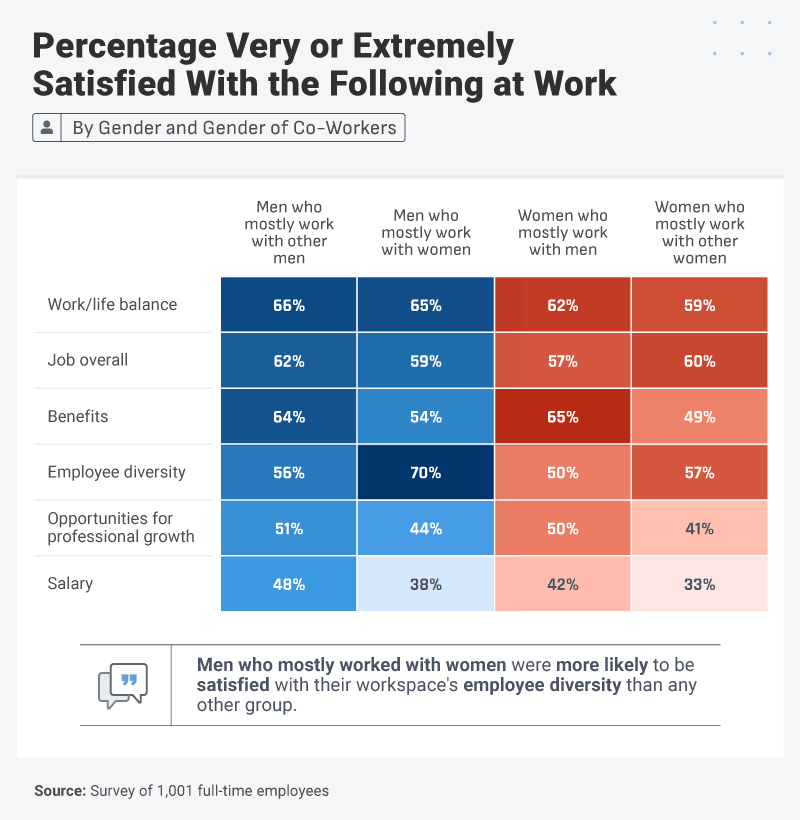 Satisfaction With Gender Diversity In The Workplace

Next, the survey respondents were asked a series of questions relating to job satisfaction. Arguably, the most interesting results reported were based on satisfaction with gender diversity in the workplace. Men who worked primarily with women had the highest percentage of satisfaction when asked how they felt about their workplace diversity (70% satisfied). Women who worked in a male-dominated space, however, were only 50% satisfied with job diversity. 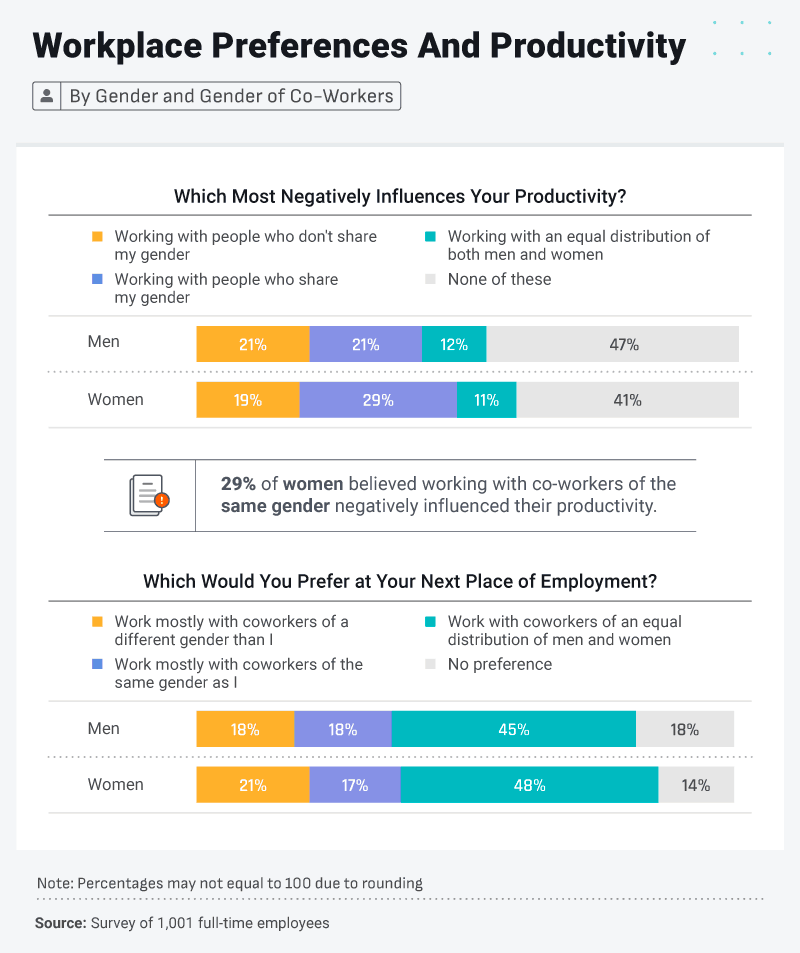 The interview next turned toward job productivity, looking specifically at how working with different genders might impact overall performance. As a whole, nearly half of all men and women agreed that working with people of the same or opposite gender had no impact on their job productivity.

However, nearly half of all men and women surveyed indicated that they would like to see an equal disbursement of male and female co-workers in their next workplace. Interestingly, a large group of women – nearly one-quarter of the women polled – indicated they’d prefer to work mostly with co-workers of the opposite gender in their next job.

This data highlights the disparities both genders feel when working in workplaces that are highly dominated by the opposite gender.

Experts suggest that more supportive work environments lead to higher performing employees, so focusing on ways to help both genders better communicate and support one another is key. While gender diversity might be a longer-term fix, workplaces can start implementing tools to help bring employees together.

For instance, it’s recommended that employees use questioning prompts like those below in order to think more critically about their motivations and actions, so they can become more supportive, helpful co-workers.

Examples include asking yourself the following:

Thinking about the answers to these questions can help employees better understand how their actions may be perceived, so they can make changes and work toward supporting all of their fellow co-workers.

Gender disparity in the workplace is a complicated topic – however, it’s extremely important to examine and understand in order to help improve equality and supportive behaviors among employees. While gender disparity certainly won’t be solved overnight, becoming more aware of the problems that plague genders in different workplace settings are a good place to start.

This data can help start conversations within workplaces on how to better support all employees and create a more positive, open, and productive work experience.