The Federal Housing Finance Agency has proposed a capital rule for Fannie Mae and Freddie Mac. It’s one of two big steps officials have taken recently to bring the government-sponsored enterprises out of conservatorship.

One of the big concerns for Fannie and Freddie is that their exit from conservatorship would be delayed significantly due to the coronavirus pandemic. However, these two recent moves suggest that the delay might not be as long as some have been saying it will.

The FHFA re-proposed its previous capital rule for Fannie Mae and Freddie Mac. The agency also published a fact sheet about the rule here. The capital rule it proposed for Fannie Mae and Freddie Mac is the same rule it proposed in 2018, which would have established new risk-based capital requirements for the GSEs. The rule also would’ve updated the requirement for minimum leverage.

The FHFA said it is proposing enhancements to the capital rule for Fannie Mae and Freddie Mac “to establish a post-conservatorship regulatory capital framework that ensures that each Enterprise operates in a safe and sound manner and is positioned to fulfill its statutory mission to provide stability and ongoing assistance to the secondary mortgage market across the economic cycle, in particular during periods of financial stress.”

The re-proposal of the capital rule for Fannie Mae and Freddie Mac begins the process to “responsibly” take them out of conservatorships. Further, the agency said it wants to increase the quantity and quality of the GSEs’ regulatory capital. Finally, it wants to facilitate regulatory capital planning, so it proposed changes to the capital rule “to mitigate the pro-cyclicality of the aggregate risk-based capital requirements of the 2018 proposal.”

The FHFA is now accepting comments on the proposed capital rule for Fannie Mae and Freddie Mac. The window for providing comments will be open for the next 60 days. In an email, AGC explained that one of the important changes to the capital rule is an additional leverage buffer of 1.5% of adjusted total assets. That’s in addition to the minimum leverage requirement of 2.5%. The FHFA also changed the LTV adjustment, which previously was seen as very pro-cyclical.

The previous 2.5% leverage requirement was at $135.1 billion with $45.5 billion in additional stress capital buffer and $53.3 billion in stability capital buffer. That creates the extra 1.5%.

In a speech before the Mortgage Bankers Association, FHFA Director Mark Calabria noted that “having a re-proposed capital rule is not the same as having capital.”

“But it is a critical step on the path toward building the capital necessary to end the conservatorships and to stand between mortgage credit risk and American Taxpayers,” he added.

In the meantime, he noted that the GSEs still have a lot of work to do before they can exit conservatorship, including dealing with the large number of forbearances on the mortgages they guaranteed during the pandemic.

He also said the issues involving Fannie’s and Freddie’s preferred shares will have to be resolved. He believes a dividend must be paid to holders of their junior preferred shares so the government will demonstrate its willingness to deal with them fairly. It would also eliminate the many lawsuits that have been an overhang for some time.

ACG Analytics said in an email that Fannie’s and Freddie‘s financial advisors will play essential roles in creating capital restoration plans for them. After those plans are finished, they will have the foundation to move forward most of the negotiations between the FHFA and Treasury Department on a Preferred Stock purchase agreement. AGC expects the plans to advise litigation settlements between preferred share holders and the FHFA and the conservatorship exit before their capital raises.

The firm released an updated timeline showing the timings it expects as far as the path to exiting conservatorship. AGC expects Fannie Mae’s and Freddie Mac’s capital rule to be finalized in November and a final amendment to the preferred stock purchase agreement between Nov. 4 of this year and Jan. 20, 2021. They expect a consent decree allowing the GSEs to exit conservatorship in January 2021 and an equity offering at some point between June 2021 and June 2023. 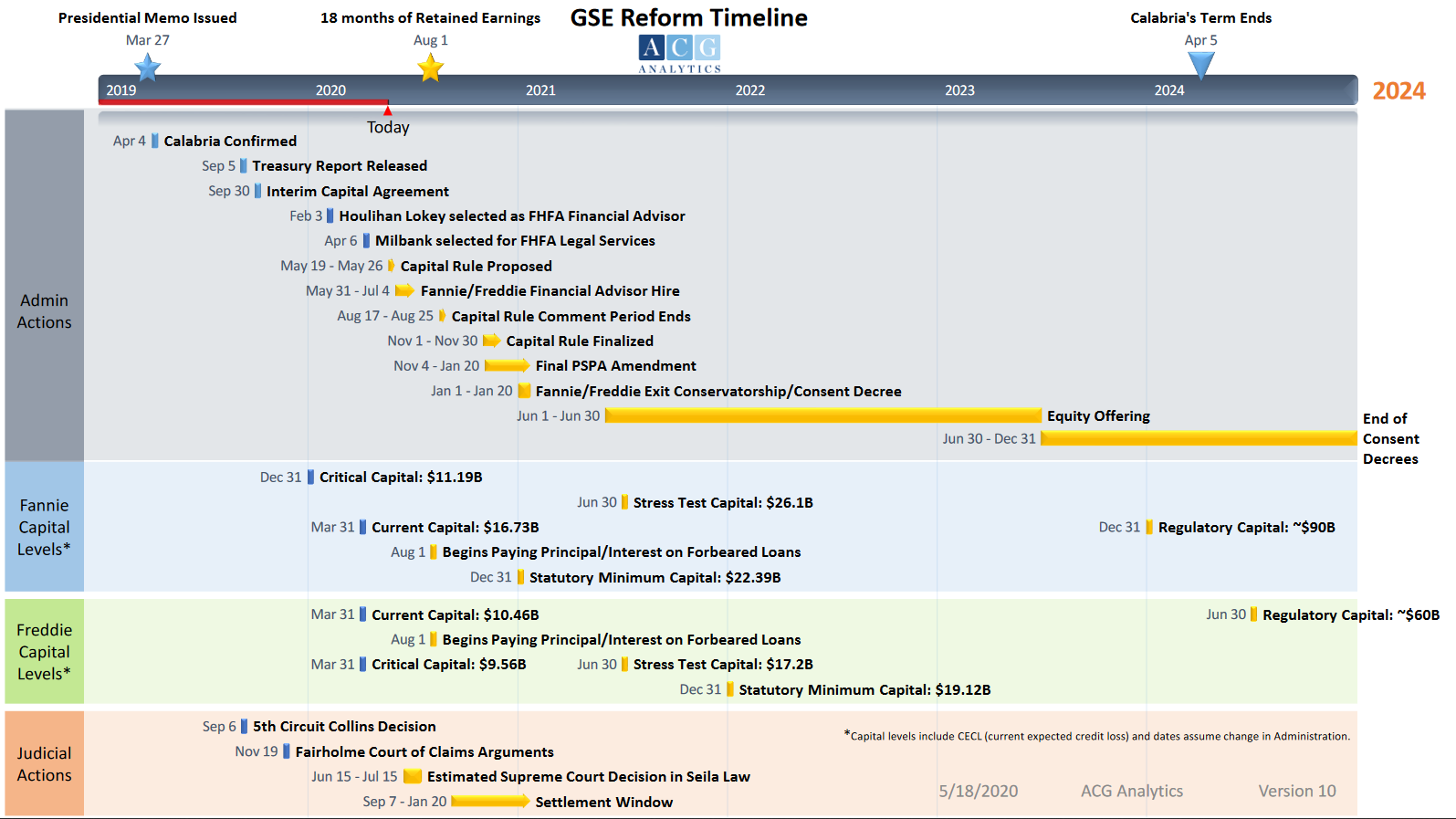