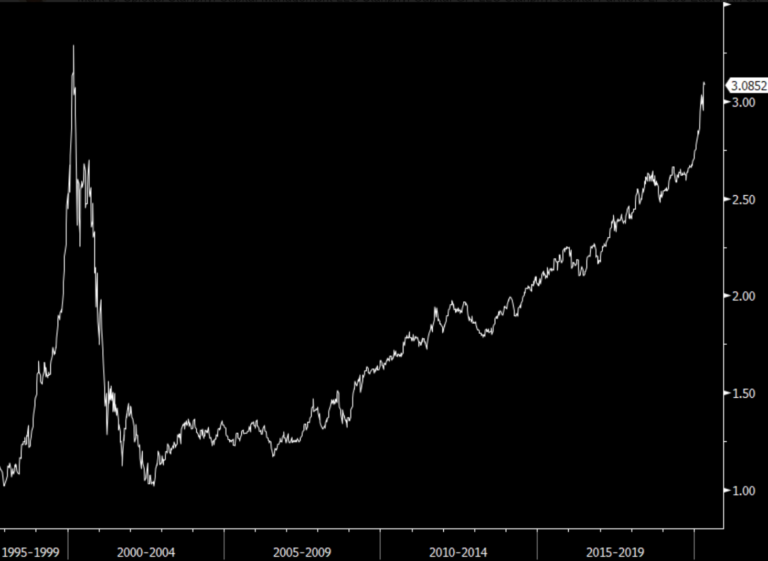 (Note: as I write this after today’s close, both Amazon and Apple have disappointed the market with their Q1 earnings reports and QQQ—which we’re short as a hedge against our long positions—is trading down substantially. As our monthly performance is marked to the 4PM close, we’ll thus begin May with around a +1.5% “head start,” assuming this carries through to tomorrow’s open.)

This month’s lousy performance was primarily due to the relative performance of our deep-value microcap long positions, which were collectively up a little, vs. our Nasdaq (QQQ) “coronavirus short hedge” which was up a lot (15%) and our much smaller Tesla short position which was up an astounding (even for Tesla!) and completely unjustified (more on that later) 49%.  Investors are not only piling into a handful of Nasdaq stocks to the detriment of small caps to an extent not seen since the bubble of 1999, but within small caps they’re piling into “growth” rather than the “value” we favor. This is encapsulated perfectly in the following two charts; I expect that mean reversion will soon turn this in our favor… 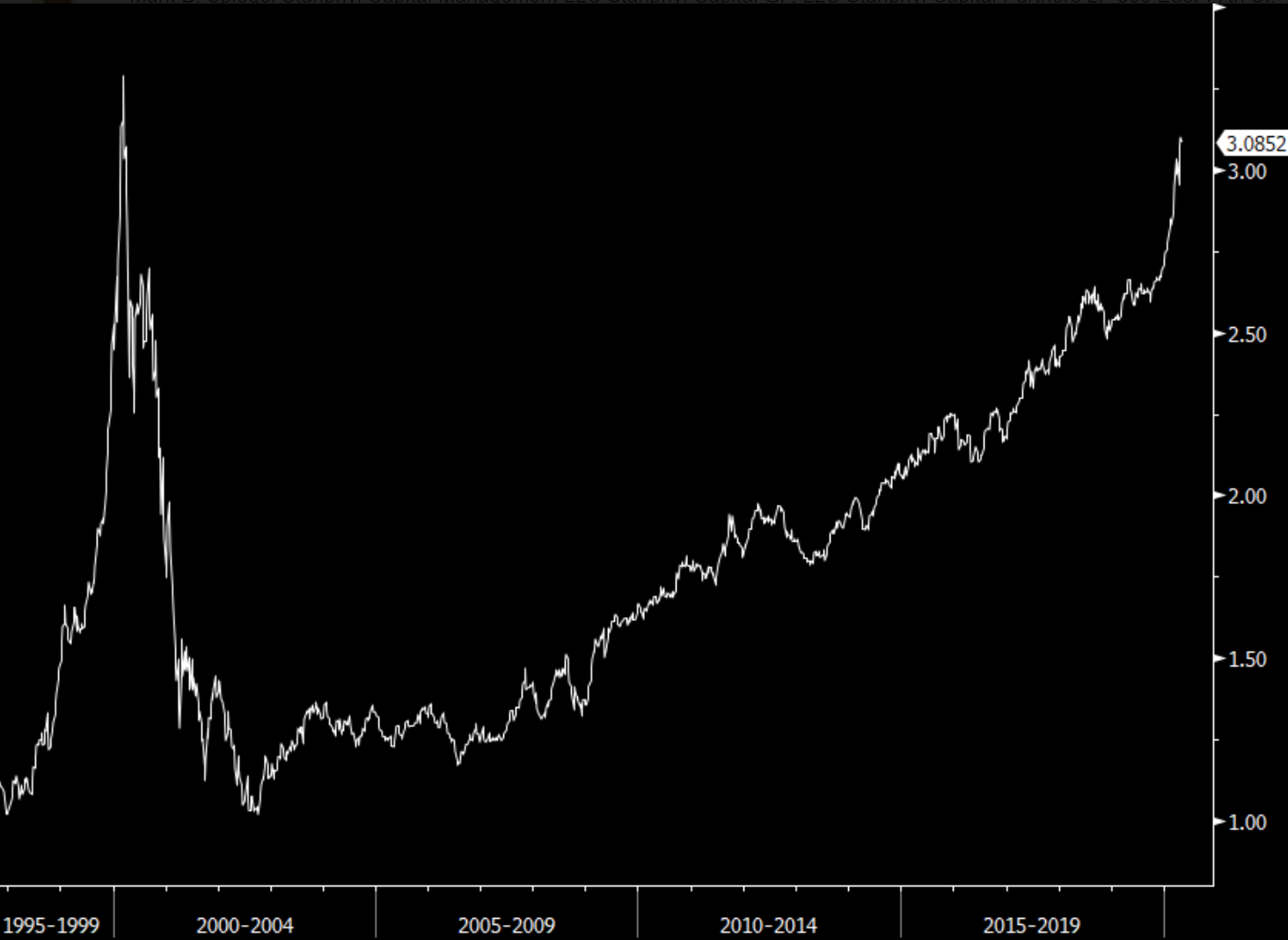 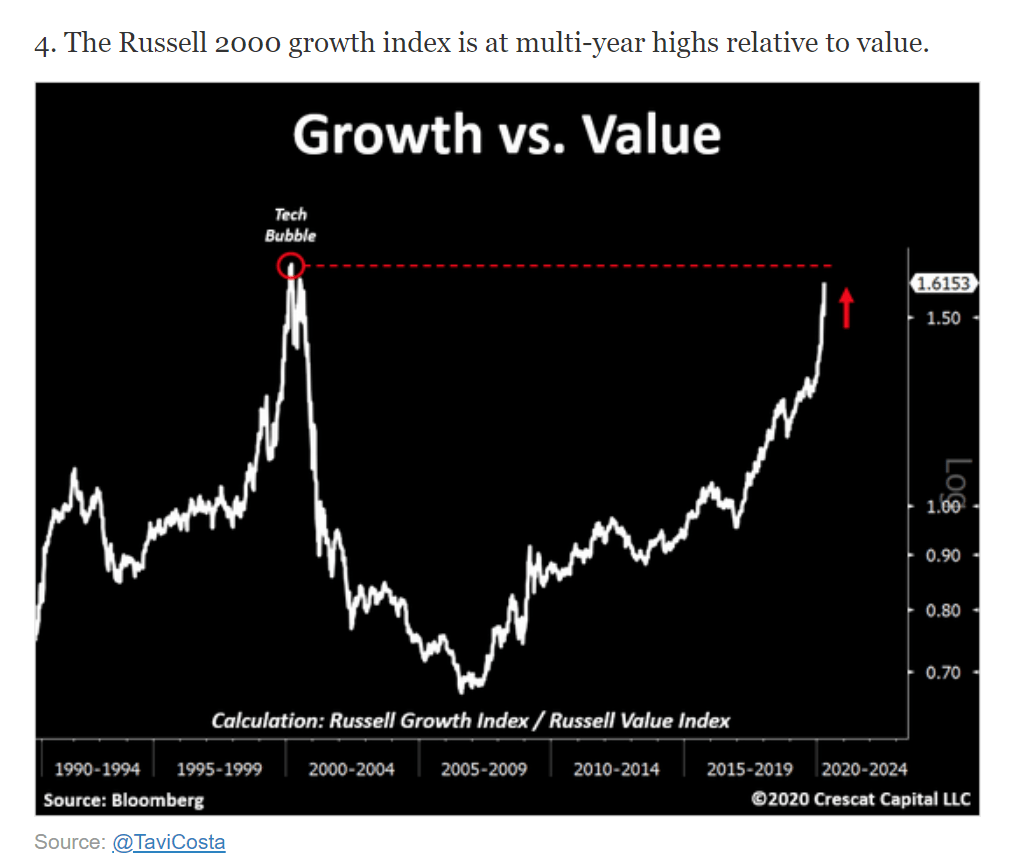 Meanwhile, I believe the broad market remains at best in a broad trading range as a tug-of-war unfolds between unprecedented government stimulus/Federal Reserve money-printing and a depression-level economy (Q1 GDP was -4.8% despite lock-downs in only the last two weeks of the quarter!), and I think it’s quite possible that in coming months the market retests and takes out its March lows; for example, in the correction just 16 months ago (December 2018) QQQ plunged into the 140s vs. a price tonight in the 215s, and the future seemed a hell of a lot brighter then than it does now.

Before reviewing the fund’s positions I want to revise the opinion I expressed last month that COVID-19 will weaken only short-term economic results, as I now believe it will have an impact for a much longer period of time, with altered behavior (crowd & travel avoidance) leaving the world in a depression until there’s a vaccine widely available (hopefully in 18 months), and then a still terrible economy (relative to 2019) for a couple of years after that as it takes time for enough confidence to be regained to start or expand businesses.

I thus wouldn’t want to own any business that’s overly consumer-facing or real estate-related (restaurants and theaters can’t make money if “social distancing” caps their capacity at 50%) and fortunately we don’t, instead holding stocks involved with technology upgrade cycles that will happen regardless of how “the consumer” is doing—in fact, some of these companies (due to the 5G upgrade cycle) may benefit from the increased bandwidth requirements of working remotely, while others may do “just okay” but we’re buying them cheaply enough that I think they make terrific strategic acquisition targets.

Thus, in valuing these cash-rich, non-consumer-dependent stocks based on revenue or earnings I’ll assume their numbers are from this summer forward (i.e., after the lock-downs) while estimating that some of them will have suffered four bad months of business during and immediately after those lock-downs, and will thus lower their cash piles accordingly (net of any forgivable loans from the Paycheck Protection Program) when calculating their enterprise values.

Here then are the fund’s specific positions…

New to the fund is a long position in Data I/O Corporation (DAIO), a manufacturer of semiconductor programming devices. We previously owned this stock in 2016 when we bought it in the $2s and sold it a year later in the $4s and $5s (it eventually ran to the $16s before collapsing, as it got way ahead of itself as new holders failed to account for its cyclicality). Now we repurchased it in the $2s for another run. In 2019 (a year that marked a cyclical low for the company), DAIO did $21.6 million in revenue with a 58% gross margin. In April it reported its first COVID-19 affected quarter (Q1 2020) in which it did $4.8 million in revenue (still with a 58% gross margin) and ended the quarter with $13.8 million in cash and no debt. Using the full-year 2019 figure and valuing DAIO at 2x that cyclically low revenue (this company is much more levered to customer technology cycles than economic cycles), then adding in $13 million of cash (estimating $800,000 of COVID-related burn) and assuming 8.22 million shares makes the stock worth over $6.80/share, which represents huge upside from our $2.71 basis.

We continue to own Aviat Networks, Inc. (ticker: AVNW), an EBITDA-positive designer and manufacturer of point-to-point microwave systems for telecom companies (here’s the company’s latest investor presentation), which in January appointed a new CEO (with the interim CEO remaining as CFO/COO), and the accompanying press release made it quite clear (based on his experience) that he was been brought in to dress up the company and get it sold. Aviat’s closest pure-play competitor Ceragon (CRNT) sells at an EV of approximately 0.6x revenue. If we assume $230 million in normalized (ex-coronavirus) revenue for Aviat, $28 million of net cash (assuming a $1 million “COVID-19 hit” of $7 million less $5.9 million of PPP money received) and a $10 million valuation on a combination of $400 million of U.S. NOLs, $8 million of U.S. tax credit carryforwards, $212 million of foreign NOLs and $2 million of foreign tax credit carryforwards, we get an acquisition valuation of 0.6 x $230 million = $138 million + $28 million net cash + $10 million for the NOLs = $176 million divided by 5.4 million shares = around $32.60/share.

We continue to own Communications Systems, Inc. (ticker: JCS), an IOT (“Internet of Things”) and internet connectivity & services company (the company’s multiple divisions are best explained by its investor presentation) which in March reported terrific Q4 earnings from continuing operations of around $1.2 million with a 46% gross margin and (adjusting for the March 11th $8 million sale of a discontinued division) $3.40/share in net cash. However, we need to adjust that income for a large one-time contract which created approximately half the earnings and 25% of the revenue. If we thus normalize the income from continuing operations to $600,000 it annualizes to $2.4 million/year which tax-adjusts to around $1.7 million, which is around .18/share. (The company has been utilizing NOL carryforwards to minimize taxes.) A 15x multiple on .18 plus the cash (less a $2 million “COVID-19 hit”) plus a $2.1 million valuation on the remaining approximately $8 million of NOLs would value the stock at around $6.10/share. The company also pays a .02/share quarterly dividend.

We continue to own Amtech Systems, Inc. (ASYS), a manufacturer of semiconductor production and automation systems. Amtech recently sold its unprofitable solar divisions and now sits on around $3.30/share in net cash vs. the $3.98/share we paid for it. This is a 40% gross margin company doing around $80 million a year in revenue with around $6 million a year in run-rate operating income and over $80 million in NOLs, and (assuming an $8 million value for the NOLs) we bought it for only around 10% of revenue on an EV basis. If we subtract $3 million from Amtech’s cash in order to account for four months of lost gross profit assuming a 30% “COVID-19 revenue hit,” then value the company at 1.5x revenue, we get fair value of around $11.50/share. The biggest risk here (other than underestimating “the coronavirus effect”) is that management—which *is* acquisitive—blows that cash pile on something stupid!

We continue to own Westell Technologies Inc. (WSTL), which in February reported a substantially lower normalized cash burn (negative adjusted EBITDA plus capex) of around $800,000 for Q4 2019 vs. the previous quarter, despite a 5% revenue decline. The company ended the quarter with $22 million in cash (let’s assume $20 million currently including a $1 million IP payment due and a $1 million “COVID-19 hit” offset by a forgivable $1.6 million CARES act grant while the company remains open as an “essential business”) and no debt, and thus has over six years of remaining cash runway to grow revenue and return to break-even (it’s projecting to do so in 2021), and obviously much more than that if it cuts the burn along the way. (Along with the earnings report the company posted a new investor presentation.)  We continue to own Westell because it’s a $29 million/year, 39% gross margin business with around $1.25/share in cash that currently sells for a severely negative enterprise value. Assuming 15.8 million shares, an acquisition price (by a cost-eliminating strategic buyer) of just 0.6x revenue would (on an EV basis) be around $2.35/share. Preventing such an acquisition is that Westell suffers from a dual share class, with voting control held by moronic descendants of the founder who refuse to sell company despite the stock’s horrible performance. However, I’m hopeful that someone will knock enough sense into their small brains to inspire them to salvage what’s left here, and thus walk away with at least something from what they’ve squandered. If they do the stock should be at least a double from here, and possibly more. In other words, it’s too cheap for me to sell but the board is too incompetent for me to buy more.

We continue to own Evolving Systems, Inc. (EVOL), a small telecom services marketing company that generates roughly $1 million/year in free cash flow with a 65% gross margin and—assuming 12.2 million shares, $1 million in net cash and a April closing price of 0.86/share—sells for less than 0.4x its $26 million of annual revenue. This company would make a great buy for a strategic acquirer, as $1.5 million/year in savings from eliminating the C-suite and cost of being a standalone public company would mean around $2.5 million/year in free cash flow. At an acquisition price of just $2/share (a roughly 130% premium to the current price) a buyer would be paying only around 10x free cash flow and 1x revenue. Also, management made clear on the March conference call that Evolving has been relatively unaffected by COVID-19 as it was already a highly decentralized business; thus the virus impact will be to draw out the sales cycle for new contacts, but it shouldn’t affect revenue from existing ones.

We continue to hold a short position in the Vanguard Total International Bond ETF (ticker: BNDX), comprised of dollar-hedged non-US investment grade debt (over 80% government) with a ridiculously low “SEC yield” of 0.55% at an average effective maturity of 9.9 years. With Euro area core inflation at 0.9% and—due to the ECB’s money-printing ultimately headed much higher—I believe this ETF is a great way to short what may be the biggest asset bubble in history.

Finally, as central banks prepare to increase their money-printing to even higher levels (in reaction to the coronavirus worldwide and, in the case of the U.S., to fund trillion-dollar plus annual deficits), we continue to hold a long position in the gold ETF (GLD) and a small short position in the U.S. 30-year Treasury bond ETF (TLT).