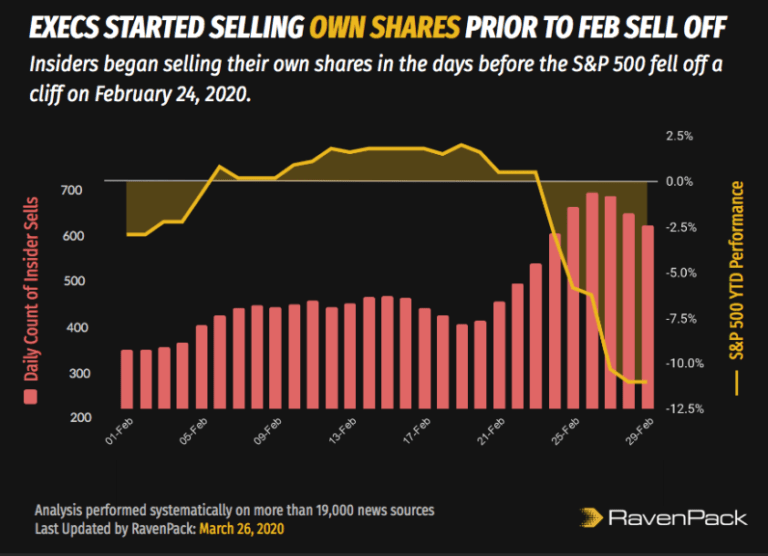 Financial news analytics have long been popular with quants who have used them to build algorithmic trading models. These are often short-term high-frequency trading strategies. The question now is whether the data can be used in more discretionary approaches, especially given the high volatility in 2020? In short, can news analytics help traders ‘time the turns’?

An example from the recent coronavirus crisis seems to support the case that they can. Although the virus was around from the end of December it did not impact the S&P 500 until February 21. Data from a leading news analytics provider, RavenPack, however, was already raising warning flags well before then.

One ill omen of the fall to come was the dramatic rise in the volume of stories in which “coronavirus” and “recession” were co-mentioned. The first story occurred on January 16. Then, a week later co-mentions represented 10% of all recession news. On February 17 the share had gone up to 50%. A few days later the S&P 500 broke lower.

There were other early warning signs too. The reported behavior of so-called insiders was one. Insiders are high level company execs who own substantial shares in the companies they work for. When they trade those shares they have to log the activity with the SEC and this data becomes publicly available. News reporters in search of a story will often report on the fillings. 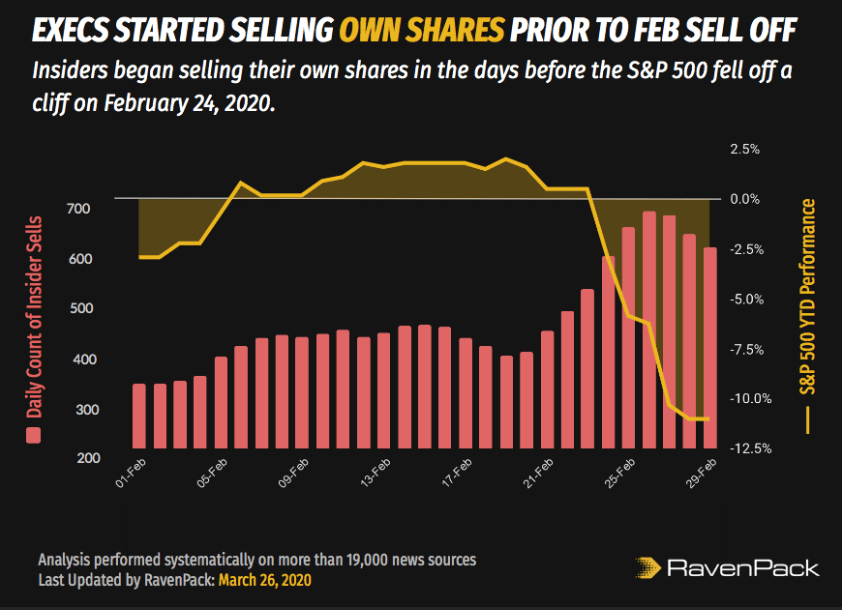 When insiders start selling en masse it is usually because they can see sales drop and know this will likely impact negatively on their earnings and the share price. So, when in mid February, there was a sharp increase in news stories citing board execs selling their own shares, it was another warning sign markets were about to roll over.

So far so good, but what about the rebound?

On March 23 the S&P 500 bottomed at around 2175, after falling over 1000 points in the preceding month. Was there anything news analytics data could have told us which might have provided a warning sign that a significant bottom was forming?

One sign, drawn from the data underpinning RavenPack covid news monitor, was that ‘supply chain disruptions’ - which had been substantial during the outbreak - appeared to be ‘topping out’ and declining. These then started to fall at the same time the S&P started to rise. 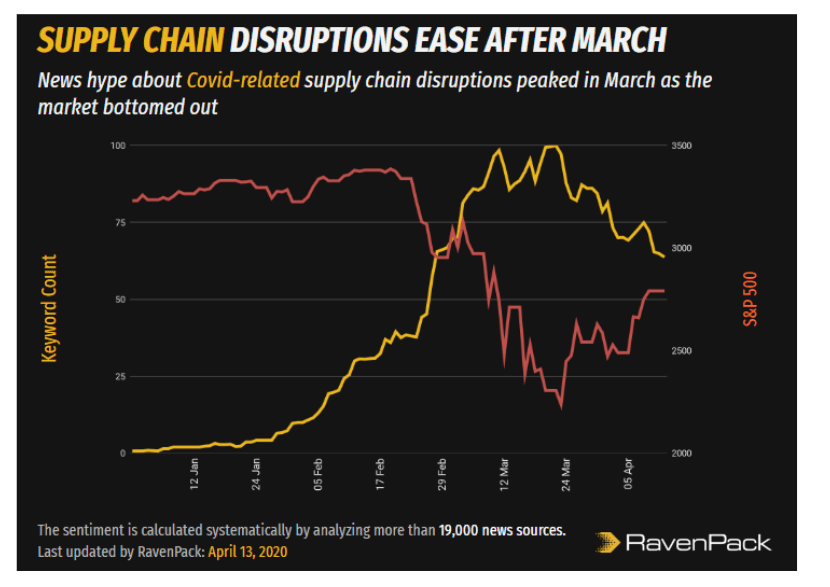 Of course, there is no doubt the 2.3 trillion U.S. government bailout was a game-changer that fueled the recovery. Interestingly, well before its implementation, headline co-mentions of “bailout” and “coronavirus” started rising. These then peaked on March 24.

Further corroborative evidence was supplied by 3 indices from the RavenPack covid-19 news monitor, which are said to possess leading properties for coronavirus cases themselves. These indices appeared to be reversing or plateauting at the time markets were bottoming. If that represented a reduction in new cases it could only be good news for financial markets too.

One of these indices, the Media Hype Index, measures the percentage of news outlets that are talking about the coronavirus. It started plateauing in late March and then formed what might be a multiple, complex topping pattern in late March - like an old fashioned ‘Head & Shoulders’. Clearly a fall in the percentage of coronavirus-related news would probably reflect an easing of the pandemic itself. 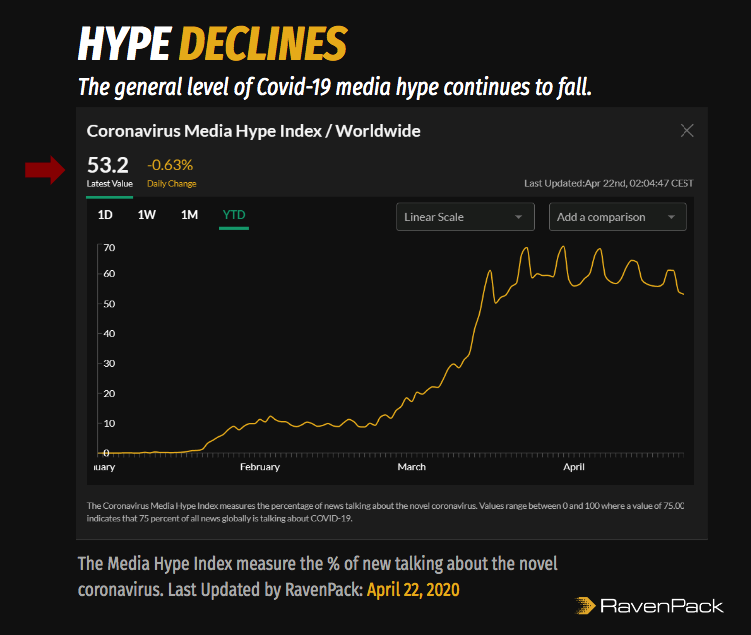 Another of these indices, The Worldwide Sentiment index, also showed faint technical signs broad covid sentiment had perhaps hit rock bottom from which the only way would be up. It formed a ‘v’ shaped reversal pattern on March 31, a week after markets bottomed. It then went on to form a higher high, further supporting the possibility of a recovery. 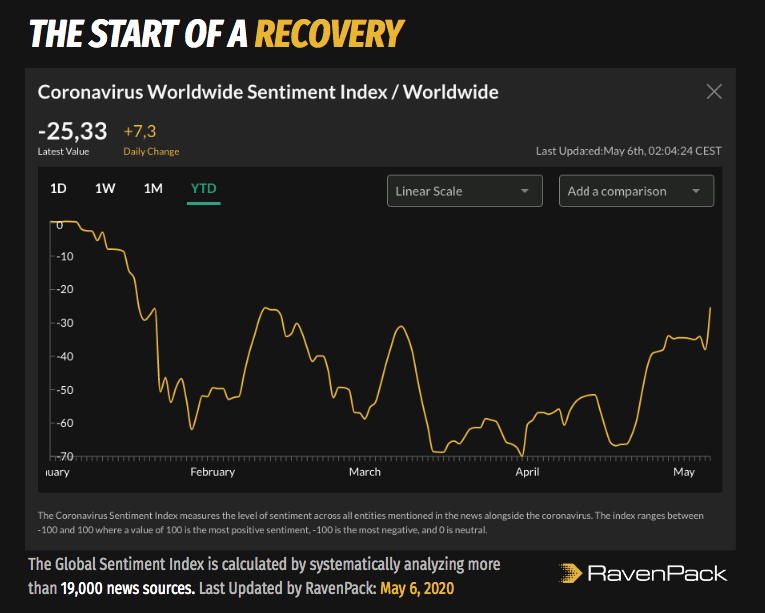 Whilst not leading markets themselves these indices did appear to provide corroborative confirmation, supporting the nascent recovery to come.

Since the March lows markets have risen spectacularly strongly, with the S&P 500 achieving a high of 2959 on April 29.

Over recent days, however, the market has pulled back and whilst it’s too early to say, there is a risk they may be turning lower again; but what light can news analytics shed on the problem?

One thing is that with so many countries easing lockdown measures - some would say prematurely - there are very real fears that a second wave of the virus could be coming, with detrimental implications for financial markets. Interestingly, the data on the RavenPack covid-19 monitor agrees: the chart below shows co-mentions of “second wave” with “coronavirus” in the news currently leaping and peaking. 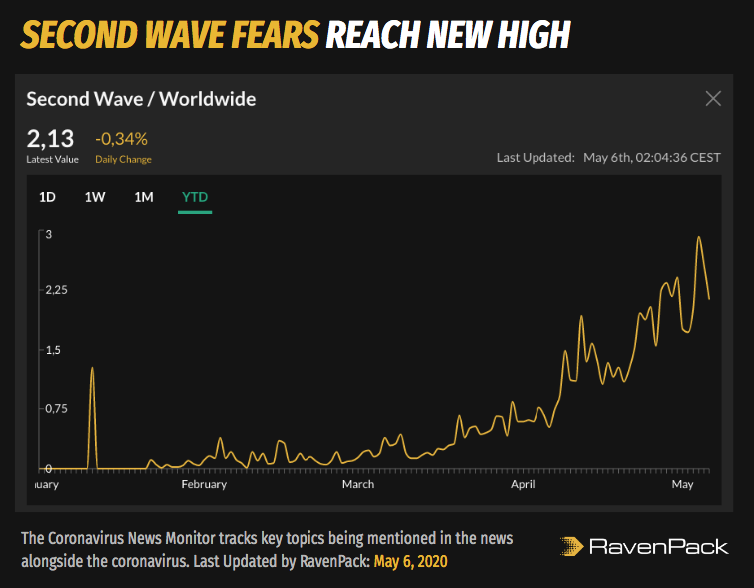 Most of these data can be accessed from the RavenPack Coronavirus News Monitor.