Whitney Tilson’s email to investors discssing the upcoming liberal landslide and PredictIt odds and why he think they’re wrong.

1) I do my best to keep politics out of these e-mails because there's little upside – anything I say politically is sure to infuriate half of my readers.

But elections have important economic consequences, and I don't think anyone would disagree that the one coming up in November will have important implications for investors.

If you thought there would be a conservative landslide, with President Donald Trump being re-elected and Republicans sweeping both chambers of Congress, thus retaking the House, you would allocate your portfolio in one way.

Conversely, if you thought we would see a liberal landslide, with Joe Biden not only winning the presidency, but Democrats also expanding their majority in the House and taking control of the Senate, I'll bet your portfolio would look fairly different.

That's why, over the next six months until the election, I'm going to share my thoughts on the probabilities of the various election outcomes, as well as some ideas on how to position yourself to take advantage of the likely outcome.

In doing so, I'm not expressing an opinion about what I want to happen – merely what I think is likely to happen. So, to those of you in the center or on the right side of the political spectrum, please don't get angry with me reading what I have to say below. I am simply trying to help my readers make good investment decisions by providing sound, dispassionate insight and analysis.

As always, I welcome my readers' feedback!

2) Rather than starting with my opinion on what's likely to happen, let's take a look at what bettors are saying...

For this, I turned to a real-money betting website PredictIt.

It currently shows that the presidential race is a toss-up, with a Democrat having a 52% chance of winning. As you can see in the chart below, the odds of this outcome have moved up over the last 90 days from a low of 42% in late February, when the stock market peaked: 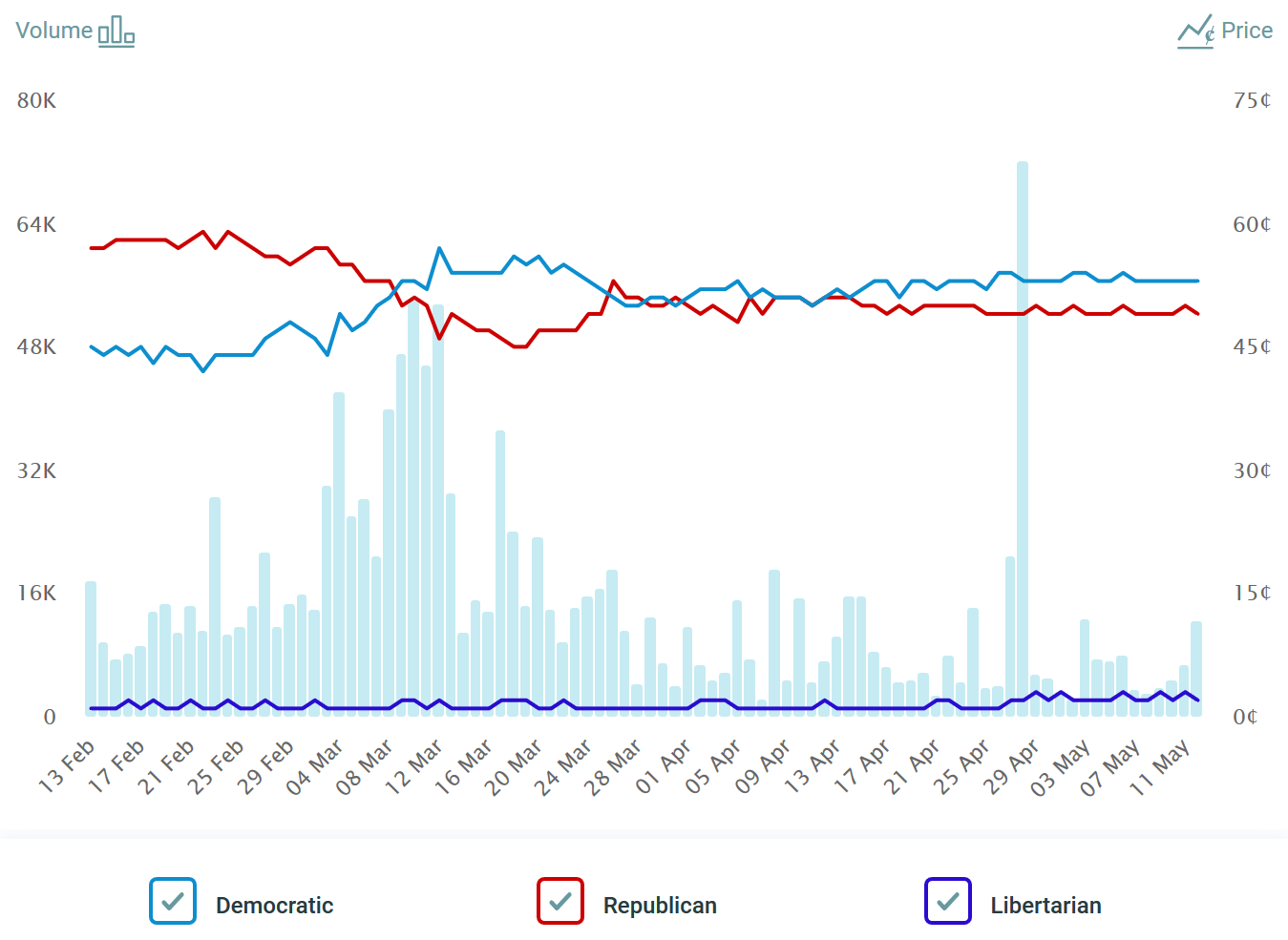 There's been a much more substantial move in the odds that Democrats will control both the House and the Senate – more than doubling from a low of 23% to the current 48%: 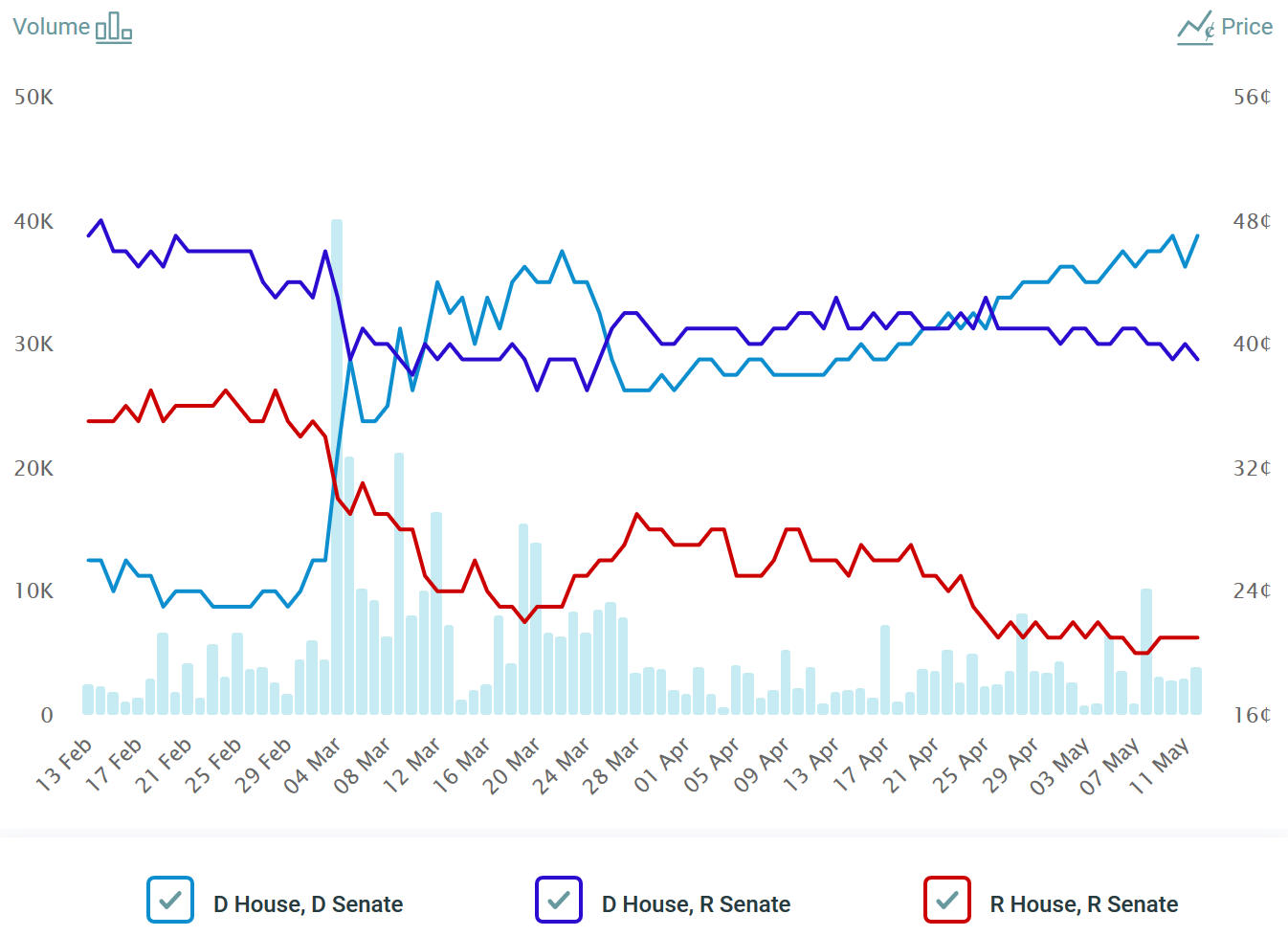 It has become increasingly clear to me that we're going to see a liberal landslide on November 3, with Democrats not only winning the presidency but also both houses of Congress, as they did in 2008 – and for similar reasons: a terrible economy and great uncertainty leading angry, frightened voters to throw out the incumbents.

Nobody wants to say this, however: Democrats, because it could lead to complacency and hurt fundraising and get-out-the-vote efforts... and Republicans, because they so strongly dread this outcome, and also worry that this narrative could become self-fulfilling.

To repeat: this is not a partisan belief. I do not believe this because it's what I want to happen, but rather based on a dispassionate analysis of: a) our lack of progress in fully defeating the coronavirus (covered in Monday's e-mail)... b) the enormous economic hole we're in, which will take years to dig ourselves out of (covered in yesterday's e-mail)... c) history... and d) current polls.