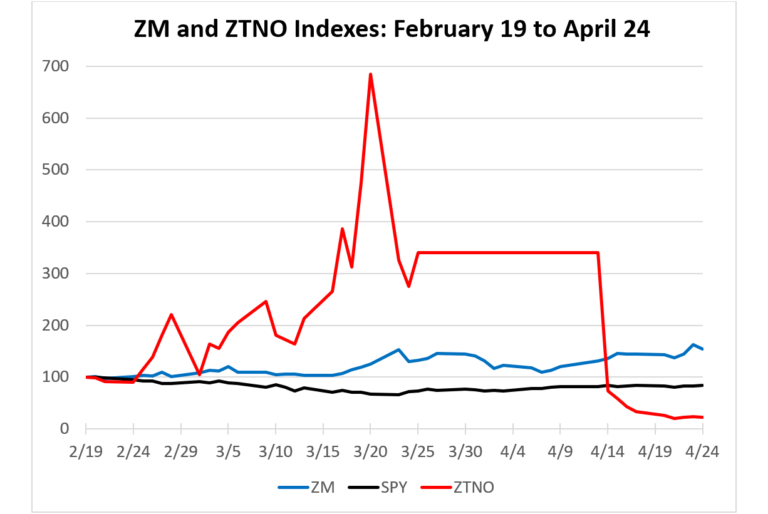 One of the themes echoed throughout my columns has been the importance of carefully estimating intrinsic value before investing.  Nothing drives this point home more forcefully than the Zoom Video Communications Inc (NASDAQ:ZM) fiasco.

ZM is the ticker symbol for Zoom Video Communications. This is the company that produces the interactive video software that has become so popular during the lockdown/work at home period.  It is a substantial company with a market capitalization of approximately $40 billion depending on the day in which it is measured.  It is one of the companies in the Cornell Capital Group Quarantine Index.  On the other hand, Zoom Technologies is a Chinese company that develops and sells electronic-communication products for mobile phones.  It is in no way associated with the video technology that made Zoom Video Communications such a recent sensation.

Nonetheless, as a quirk of history its ticker symbol was ZOOM. (The ticker was subsequently changed to ZTNO for reasons discussed below.)  It is a tiny company which has struggled for much of its life.  As of February 2020, it had market capitalization on the order of $20 million, less than 0.10% of the value of ZM.

As a starting point, the chart below plots an index based on stock price of ZM.  The index is set equal to 100 on February 19, 2020 at which point the overall stock market was at its peak prior to the virus-related collapse.  As the chart shows, the market, as measured by SPY, began falling on February 20 and was down 33% by mid-March before recovering somewhat.  The performance of ZM was markedly different.  Although the stock was highly volatile, by April 24 it was up almost 55%.  This performance is consistent with the interpretation that the lockdown was a huge boon that incentivizsed new customers to start using ZM’s video conferencing software. 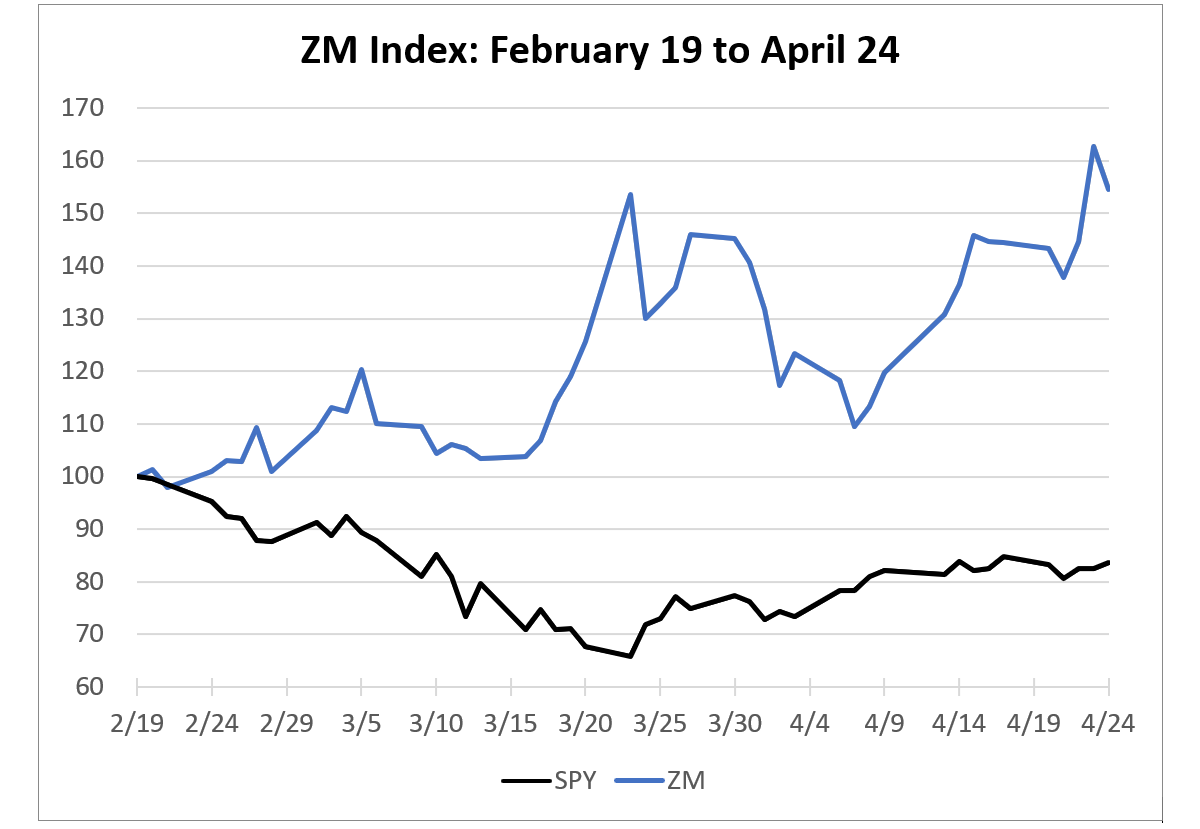 The second chart adds the index for Zoom Technologies.  Doing so, completely changes the scale of the chart.  The movements in ZTNO are so large that the market and ZM appear almost as straight lines.  From a starting point of 100, the ZTNO index rockets up to almost 700 before collapsing to just over 20 by April 24. 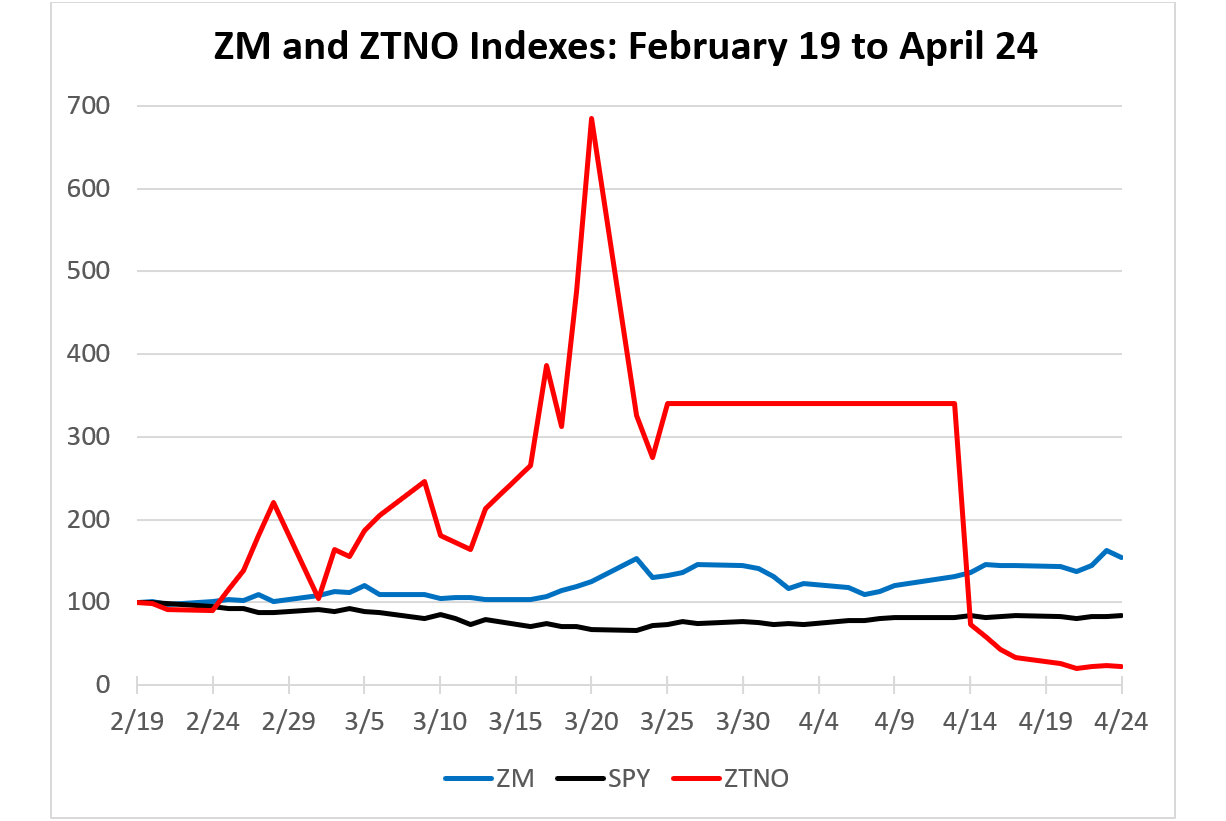 The massive run-up in ZTNO caught the eye of the SEC.  On March 25, 2020, the SEC temporarily suspended trading in ZOOM Technologies pursuant to Section 12(k) of the Securities Exchange Act of 1934, citing "concerns about the adequacy and accuracy of publicly available information concerning ZOOM, including its financial condition and its operations, if any, in light of the absence of any public disclosure by the company since 2015."  More pertinent than its concerns about ZOOM Technologies' financial health, though, were the SEC's "concerns about investors confusing this issuer with a similarly named NASDAQ-listed issuer providing communications services, which has seen a rise in share price during the ongoing COVID-19 pandemic."  The SEC apparently concluded that investors wanting to buy ZM  placed orders for ZOOM.

Given the small size of ZOOM, a few misplaced orders could have been enough to cause a significant jump in the stock price by attracting both more misinformed investors and momentum traders.  As a result of the suspension, Zoom Technologies did not trade between March 25 and April 8.  That is the reason the index line on the second chart is flat.  As part of allowing trading to resume, the SEC required that the ticker symbol be switched to ZTNO to avoid any future confusion between the company and Zoom Video Communications.

When trading in Zoom Technologies restarted on April 9, 2020 with its new ticker symbol ZTNO, the index for the stock promptly dropped from 340 to 74.  Thereafter, it continued to decline until it hit 22.42 on April 24.  At this point the stock was trading for only $0.72.  From a fundamental standpoint, this appears to be in the ballpark of a fair price.

Several lessons emerge from the ZOOM/ZM fiasco.  One is that although the market is highly efficient, it is not perfectly so.  The sevenfold run-up in the price of ZTNO clearly did not reflect a corresponding rise in its fundamental value.  The subsequent behavior of the stock price suggests that the fundamental value was actually falling, along with the market, as the stock price rose.

More importantly, as noted at the outset, it underscores the importance of including an assessment of intrinsic value, as measured by discounted cash flow (DCF) analysis, when making investment decisions.  Although DCF analysis may not be sufficient to allow an investor to beat the market, it will help avoid fiascos such as that associated with Zoom/ZM.  Any investor who conducted a DCF valuation analysis would never have mistaken the two companies or purchased ZTNO on the basis of its momentum.