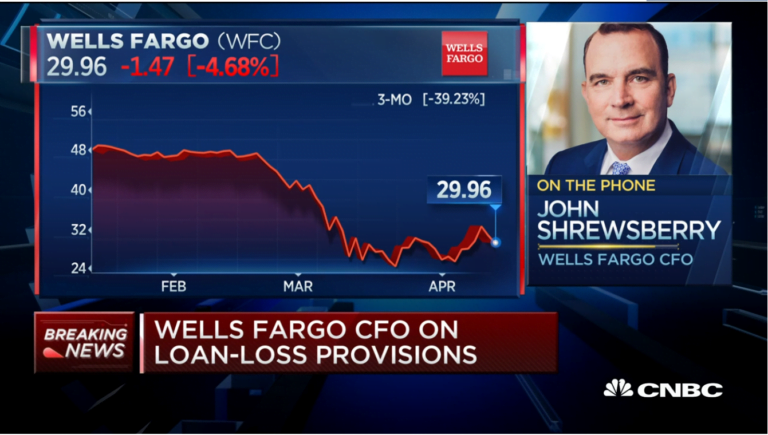 WILFRED FROST: Wells Fargo shares lower after reporting quarterly results. The bank setting aside nearly $4 billion in loan loss provisions, amid coronavirus uncertainty. The CFO, John Shrewsberry, joining us now. Very good afternoon to you. Thanks for joining us.

JOHN SHREWSBERRY: Thanks for having me.

WILFRED FROST: I feel like there’s a sense on the calls that provisions are going to get much worse in the quarter ahead. The stock opened higher. It’s now down by about 4.75%. Similar theme coming from JPMorgan. Is that fair? Do you think provisions for bad loans in Q2 could be bigger than they have been this past quarter?

JOHN SHREWSBERRY: It’s hard to say. I think that the economic forecasts are changing rapidly, at least over the last several weeks, they’ve been generally been getting a little bit more steadier, rather than a little bit softer. Those are meaningful inputs into how people are calculating future expected provision expense. And the big question is when the economy will reopen, and when people can go back to work and go back to spending money.

You know, consumer spending is down markedly year over year and that has an impact. So, you know, there are specific areas like energy, et cetera, you were talking about just a moment ago where there are some idiosyncratic things that have ever happened. But elsewhere we’re really just imagining and foreshadowing what might happen as a result of an elongated economic trough and thinking about means for credit reserve. I think we all do our best to capture them in real time, but, you know, if the economy is going to remain closed into the summer, through the summer, et cetera, then presumably, things could get worse. And we’ll pick that up, we and others, as we calculate.

WILFRED FROST: Totally get it, John, that there’s so much uncertainty and it’s very hard to predict and put specific numbers on it. If I look, though, your total reserves ratio to loan at the moment, that only increased by 10-basis points to 1.2%. And 1.2% might be high relative to the good times, but given the dramatic impact we’re facing on the economy, if you came out with only 1.2% of your total loans going bad, that would be a massive win, wouldn’t it?

JOHN SHREWSBERRY: Well, it depends. I mean, in our own severely adverse case for our stress test that we submit as part of our annual process, at least the last time around, our nine quarter losses were about two- and three-quarter percent. That’s a more severe set of economic circumstances than we’re currently imagining here. And incidentally, each quarter, we do take charge offs as they occur, which you would sort of add to the amount of the current provision for what’s likely to happen over this year, or this year plus next year. So, could it be higher? Perhaps. We have -- our loan portfolio looks a lot different than some of the other big because we have probably an overweight on jumbo mortgages, which tend to be the more affluent people and more modest LTV. We have an underweight on credit card receivables because we have a much smaller credit card portfolio, and credit card tends to be the source of some major losses in an environment like the one that we’re imagining. There are other areas for sure, but at least if you’re comparing from bank to bank, that’s probably an important differentiator.

SARA EISEN: John, since we’re talking so much about those loan loss provisions, way more than we’re talking about earnings and revenues, between you and what JPMorgan reported this morning, it’s more than $12 billion to cover I guess defaults on the economy. Can you just help people who don’t follow banks to understand, what those numbers are about and whether they project any sense of pessimism or expectations of what’s going to happen in this economy?

JOHN SHREWSBERRY: Sure. So, we’ve incidentally, and I think we’ve covered this before, but this is the first quarter for a new accounting standard for loan loss provisioning for banks, which is more than any of your viewers want to hear about, but it does change the approach that banks take. We’re now, it’s a life of loan estimation of loss. Previously, it was a shorter period of recognition in the allowance calculation. So, these numbers are bound to be a little bit bigger than they would have been previously. You’re really going loan category by loan category and estimating the probability of default, which is going to be higher and higher unemployment and lower GDP world, and then loss given default, which tends to be very high for unsecured types of credit, like credit card, like I mentioned. And it can be low for secured types of lending.

I would put modern-day mortgage lending in the category like that. And, you know, your estimation of where unemployment goes, where GDP goes, where unemployment goes, where the stock market goes, all of those things matter. And then on a regional basis as well. So national banks tend to have their whole portfolio broken up in regions of the world and regions of the country. We’re just talking about the top-level numbers, but the details really matter.

And you know, on, as I mentioned, in our own severely adverse calculations of our own annual stress testing process, we, under those circumstances could imagine losses over a little bit more than two years amounting to about two and two-quarter percent. So, think about that as the total amount of loan portfolio that gets charged-off or written off during that time frame. I know at least as we’re sitting here today with the writing on the wall, but the economy not having gone quite into recession, measurable recession yet, it seems a little conservative to assume that nine quarters from now, we’re going to live through something as severely adverse as that.

SARA EISEN: Well, my only follow up to that, John, is isn’t the massive unprecedented fiscal stimulus plan that, or relief plan we just got out of Washington of more than $2 trillion designed to keep businesses in business and people employed? So, are you saying we’re still going to see widespread defaults, even with the government trying to prevent that?

JOHN SHREWSBERRY: No, I’m saying that in the accounting for what might happen, we generally run these things without appreciating -- certainly we don’t plan on stimulus and as you say, we’ve gotten it. So that is definitely an offsetting benefit that people will be picking up in the math, either on an imagined basis or on a realized basis as people receive those payments. And for example, under the PPP plan if they keep people on the payroll that otherwise might not be. And for consumers who are receiving these payments directly, if they get out there and spend them, that will have a huge benefit this isn’t forecastable and will pick up with the passage of the next week, months as it happens. So, it’s a very good point.

WILFRED FROST: John, the Fed has temporarily lifted the asset capital on Wells Fargo to help you with small business lending. I wondered whether you’re disappointed in the way with which the Fed kind of labored to get to that decision. It came two or three weeks after you guys initially requested it. They made very clear that it was only temporary. They also ensured that you will have to give away any profits from the PPP program the charitable causes as opposed to making money yourself. Were you disappointed that they made that so difficult?

JOHN SHREWSBERRY: Not disappointed at all. We’re glad we got to work together on something that ends up working out in a way that it can benefit our small business customers. You know, we own the fact that we have the asset cap. The fact that we have to do the work necessary for it to go away. And it was constructive that we ended up where we did. And would it have been better if we, Wells Fargo, had caused it to happen a couple of days earlier? That would have been helpful. But we’re in the position now of processing massive numbers of these PPP indications of interest, et cetera. So, we’re looking forward to the benefits of that for our small business.

JOHN SHREWSBERRY: We are working hard to create the circumstances that allow them to consider that. And, the board feels that way, Charlie feels that way, the leadership team feels that way. So, it will happen in due course, when we’ve delivered what we need to deliver to them, and they’ve had a chance to process that. But in the meantime, we’re making it work. We have a trillion-balance sheet, so we really can support a lot of customer activity and what we’re talking about is at the margin. It would be great if we had created an outcome that allowed that cap not to exist today, but it does and we’re working with it. And we have as you pointed out, created a workaround for the PPP and Main Street loans that we can originate now in size.

WILFRED FROST: That said, John, there was a moment on the call where Charlie Sharp, your CEO, kind of suggested that your dividend is even safer than perhaps some rivals because of the asset cap. Because you have fewer internal uses of your capital because of the cap and therefore, the use of the capital the return to shareholders is even more assured. Is that fair that the dividend has less likelihood of being cut than others?

JOHN SHREWSBERRY: Well, for sure we don’t have -- this opportunity of redeploying internally generated cap it will for internal purposes to make more loans. And so, given that, our capital levels are probably less under stress than others because we’re not growing at the same rate some others might be. And so yeah, I think you can conclude that.

WILFRED FROST: John, thanks so much for joining us. Much appreciated.