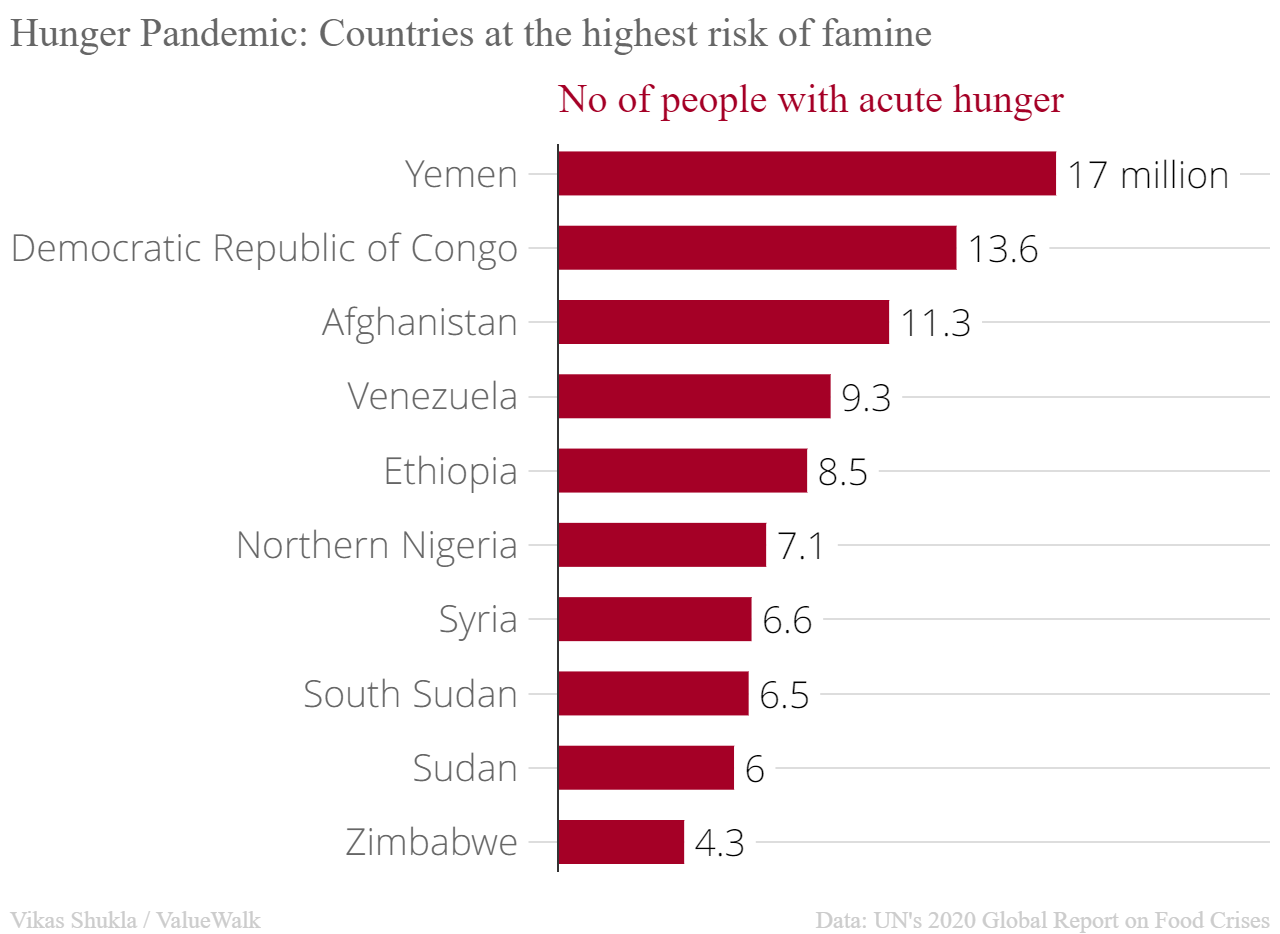 Even before the coronavirus pandemic brought global economy to a halt, at least 135 million people were living with ‘acute hunger.’ The United Nations’ World Food Programme (WFP) has warned of a ‘hunger pandemic’ of biblical proportions in 2020 as the world fights the COVID-19. Here we take a look at the ten countries at the highest risk of famine this year due to COVID-19.

Dozens of nations staring at famine

In its 2020 Global Report on Food Crises, the World Food Programme said that the number of people living with acute hunger could nearly double from 135 million at the end of 2019 to 265 million in 2020.

Most countries have enforced quarantine, which is aimed at containing the spread of coronavirus. But it has also hit the daily wage earners hard. Hundreds of millions of people in Africa, Asia, and South America don’t have enough savings to sail through the crisis. The daily earners get to eat only if they earn a wage.

WFP executive director David Beasley said Tuesday that even before the coronavirus became an issue, 2020 was set to face the “worst humanitarian crisis since World War Two.” Now the COVID-19 has further worsened the situation.

The WFP needs an estimated $10-$12 billion to provide food to the poor. If it fails to secure funding and food immediately, at least 30 million people could die of hunger. The problem is nations capable of contributing to the WFP are themselves struggling with an economic and health crisis. The COVID-19 pandemic is going to cost the world trillions of dollars.

At least 55 countries are at the risk of famine due to wars, armed conflicts, coronavirus, collapsing oil prices, and the economic turmoil. What’s even more alarming is that besides 265 million people facing ‘acute hunger,’ there are 821 million people living with chronic hunger. It means more than a billion people are struggling to get access to sufficient food.

Countries at the highest risk of famine

The country in the most dire situation is Yemen, where an estimated 17 million people are living with acute hunger. The war-torn country has the highest number of internally displaced people due to an armed conflict between a Saudi-led coalition and the Houthi rebels. The WFP was assisting only 3-4 million people in Yemen in 2016. The number has jumped to 12 million in 2019. The WFP said recently that it was going to reduce the aid to Yemen due to a funding crisis.

Afghanistan is another country where the combination of conflict and coronavirus are the main causes of famine. Almost half of the country’s population lives in poverty. An estimated 11.3 million people are living with acute hunger, according to the WFP. There have been more than 1,300 confirmed cases of coronavirus in Afghanistan.

Venezuela is also facing a high risk of famine. The Latin American nation is struggling with falling oil prices, hyperinflation, and poor economic conditions. An estimated 5 million citizens of the Venezuela have taken refuge in neighboring nations in the last few years.

War-torn Syria has a staggering 6.6 million people living with acute hunger, according to the WFP. Millions of Syrians have left the country to settle in other nations. Millions more had to flee their homes to settle somewhere else in their own country. Syria has only 43 confirmed coronavirus cases so far.

African countries also at the highest risk of famine

The Democratic Republic of Congo is at the second highest risk of famine. The country is rich in natural resources but suffers from political instability. Conflict and violence have forced millions to flee their homes. According to the WFP, more than 15% of Congo’s population is “severely food insecure.” It means aid from international agencies is the only way for them to access food.

More than half of South Sudan’s population suffered a food crisis in 2019. South Sudan gained independence from Sudan only in 2011. Both Sudan and South Sudan have suffered from civil wars, drought, and political instability. A staggering 6.5 million people in South Sudan and 6 million in Sudan are facing acute hunger.

The WFP said the situation has also worsened in Zimbabwe. The total number of people living with acute hunger is expected to jump from 3.6 million in 2019 to 4.3 million this year. The country is still struggling with sky-high inflation, unemployment, and corruption.