Interpreting movements in the stock market is difficult enough in normal times.  The Covid-19 crisis has made it all the more difficult with the market lurching up and down as it attempts to process news about the virus and its economic implications.  To help investors make sense of the financial gyrations, the Cornell Capital Group has introduced a new index called the CCG Quarantine Index.  The index tracks the performance of the stocks that are likely to benefit from the fact that millions of people are more or less confined to their homes during the lockdown.  The index is composed of companies such as Amazon, Netflix, Grubhub, Electronic Arts, and Zoom.  It is an equally weighted index so as to not give undo weight to giant companies like Amazon.  (More information on the index is available at cornell-capital.com.)

Before discussing the performance of the CCG Quarantine Index, a word on market efficiency is in order.  The notion of an efficient stock market, originally developed by Eugene Fama of the University of Chicago, holds that stock prices reflect all relevant information about the value of the company.  As a result, it is impossible to “beat the market” by looking for trends or patterns in stock prices.  According to the hypothesis, there are no such patterns because their existence would imply that the market had not properly incorporated past information.  Although the market may not be perfectly efficient, decades of research by hundreds of scholars has shown that it is highly efficient.  As such, it is wise to use the efficient market hypothesis as a starting point when interpreting stock price movements.

What does the efficient market hypothesis predict about the behavior of the CCG Quarantine Index?  To begin to answer that question, I assume that the companies in the index are in fact likely to do better than the market generally in response to a lockdown.  In that situation, the efficient market hypothesis predicts that when it becomes known to the market that a lockdown will occur, the CCG Quarantine Index will rise relative to a general market index such as the S&P 500.  After that, the relative performance of the two indexes should reflect the arrival of new information regarding the length or extent of the lockdown.  Consequently, the spread between the CCG Quarantine Index the S&P 500 can be used to interpret how the market is reacting to news about the reopening of the economy.

The chart below plots the cumulative return, beginning on February 26, for both the CCG Quarantine Index and the exchange traded fund, SPY, which tracks returns on the S&P 500 stocks including dividends. 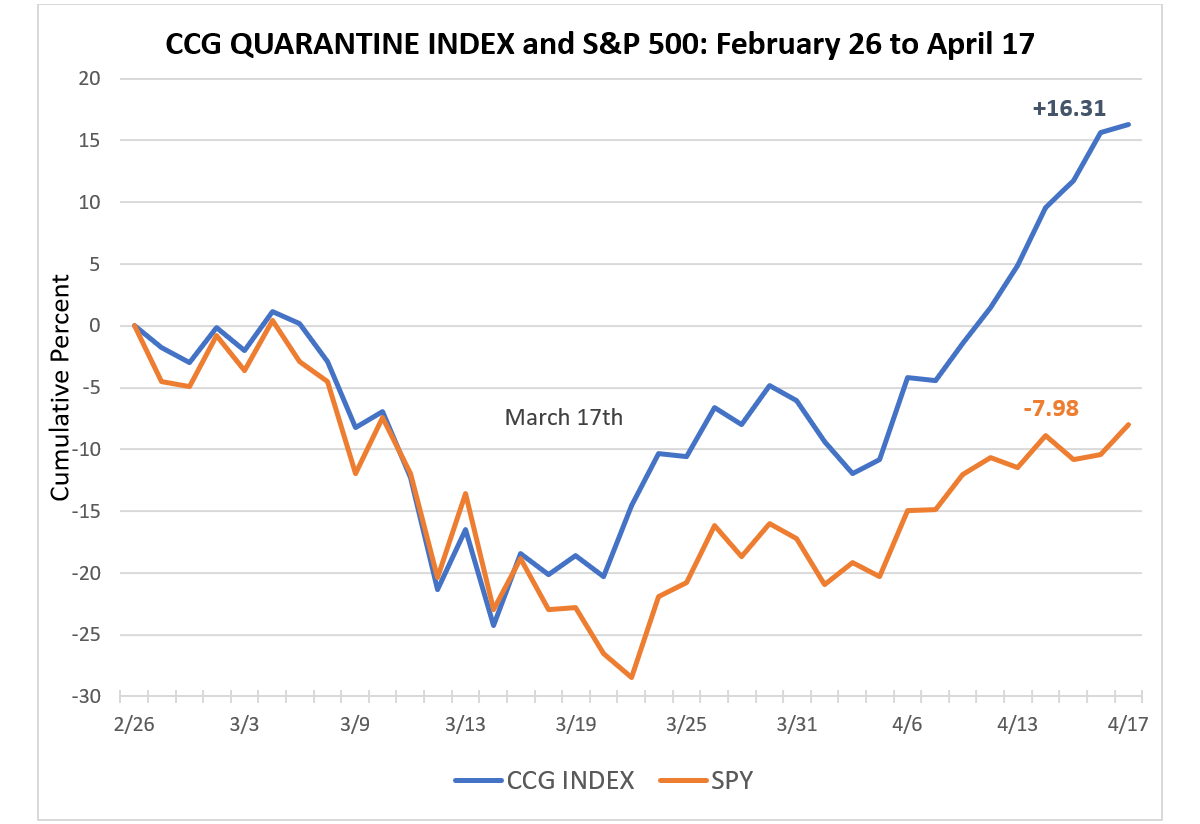 The first thing to notice is that lines are nearly on top of each other through March 17.  In contradiction to the efficient market hypothesis, the market apparently failed to distinguish any difference between the quarantine stocks and other stocks during the early days of the crisis.  The situation markedly changes in the days following March 17, when the two lines noticeably diverge.  That divergence tends to increase, with a good deal of random variation, until it reaches a maximum 26.06 percentage points on April 16.  If the efficient market hypothesis is correct, the ups and downs of the spread between the two lines reflect changing views regarding the lockdown as new information arrives.

Finally, it is worth noting that on April 17, when the overall market jumps on positive news regarding the reopening of the economy, the CCG Index remains largely unchanged.  As a result, the spread drops to 24.29 percentage points.  Apparently the market concluded that a faster end to the lockdown would ameliorate some of the advantages of the companies in the CCG Quarantine Index.

There are a couple other insights that the chart provides.  The most pronounced is the remarkable performance of the CCG Quarantine Index.  As of April 17 the cumulative percentage gain, over its level on February 26, is 16.31%.  Contrary to the efficient market hypothesis, it is hard to accept this gain as rationally reflecting all available information.  Although the Covid crisis may have provided companies such as Amazon with a competitive edge, it is difficult to rationalize a gain of 16.31% during times of skyrocketing unemployment, plunging GDP, and huge federal deficits.  Although not as dramatic, the performance of the overall market is also noteworthy.

By April 17, SPY is only 7.98% below its February 26 level.  To a worrier who does not fully accept the efficient market hypothesis, such as the current author, this suggests that the market may be getting ahead of itself.  At a minimum, it bespeaks a note of caution, particularly with respect to the quarantine stocks.