ValueWalk
Home Business As Politicians Push For Buyback Ban, One Bank Asks Who Will Support... 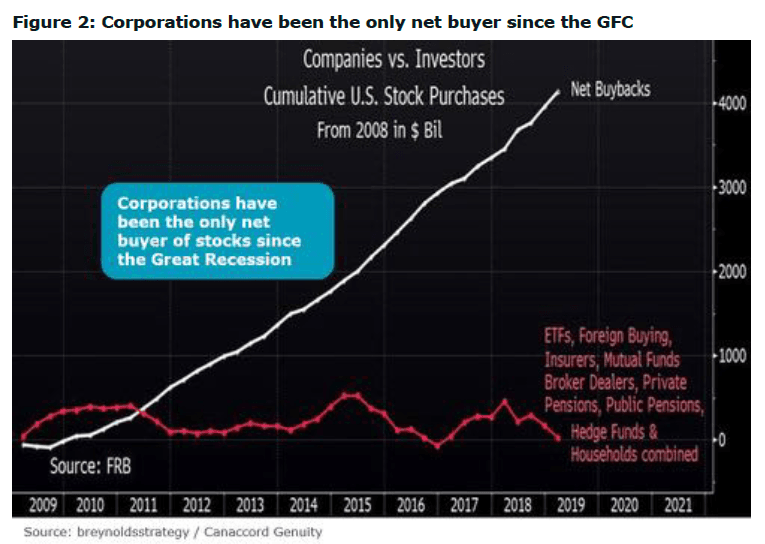 Many big companies have suspended their share buyback programs amid pressure from lawmakers and others. One firm argues that this is unwise because it has removed the only buyer at the time of a major market plunge. However, there are some good reasons to suspend buyback programs at a time like this.

The relief rally is over

Canaccord Genuity analysts Tony Dwyer and Michael Welch said in a report this week that the S&P 500 has seen its worst quarterly performance since 2008 and the worst first-quarter performance ever. The first quarter even includes a relief rally in which the index gained about 17%. They explained why the relief rally had already run its course.

They noted that the market is no longer in such a "historic extreme near-term oversold condition." Further, the Federal Reserve and the government have already revealed the steps they're taking to stimulate the economy. Finally, pension funds finished their quarter-end rebalancing, shifting out of bonds that had increased too much and out of stocks that were down too much.

Now the next question is where the next buyer will come from to keep the market moving higher. They choose to ignore the coronavirus pandemic and President Trump's warning about it and focus on supply and demand for stocks.

After the historic climb last week into Monday, traders began taking profits on the stocks they bought since the low on Monday of last week. Individual investors started staying home, and pension and endowment funds finished their quarter-end rebalancing toward stocks. Finally, they note that almost every major company has suspended its share buyback program.

Thus, many of the biggest banks, travel and leisure companies, and other companies in the S&P 500 have suspended their buyback programs. However, they believe this presents a problem because they say that the upside seen since the Global Financial Crisis "has been fueled by trillions of dollars of S&P 500 aggregate net purchases." 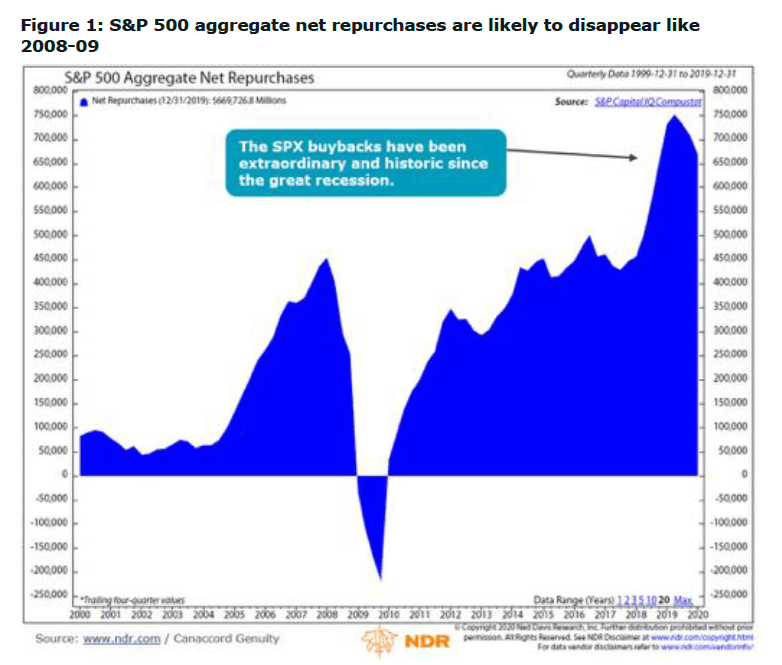 They also point to data from Brian Reynolds, who was previously with Canaccord and now has his own firm. He said companies have been the only net buyer of stocks.

"The politicians and need for cash have just literally removed the only buyer from the marketplace as we head into the heart of the COVID-19 crisis and economic shutdown," they wrote.

While suspending share buyback programs does remove the only buyer, it doesn't mean such programs should continue at times such as this. The data is also interesting because it means the longest bull market ever was driven by corporate share buybacks instead of real demand from retail and institutional investors.

Many companies have been buying back shares to juice their stock prices. That increases the value of stock options for their executives. It also boosts their earnings per share, which makes them look more attractive to investors. Buyback programs are also aimed at returning capital to shareholders.

However, at a time when many workers are being laid off and put out of work for weeks, if not months, investors and high-level executives aren't the ones who need funds the most. Airlines in the U.S. were lining up for federal bailouts as their business crashed, but they have bought back billions of dollars' worth of their own shares in recent years.

If they hadn't done that, they would have been in a better financial position now to handle the major downturn in their industry. The focus had been on improving their share prices when they actually should have been preparing for turbulence.

Funded by credit, left with debt

Another problem with share buyback programs is that most of them have been supported through credit. Studies have shown how much credit has been taken on during the bull market, often to support share buyback programs. However, companies that took out credit to buy back shares are now finding themselves with less revenue and more debt. As a result, they're not able to support payroll at a time when their employees need them the most.