Public pensions have had weak liquidity for a long time, but the recent volatility has made a bad situation even worse. S&P noted that pensions‘ investment horizons are decades long. As a result, many funds claim that market turmoil doesn’t affect their returns because they have plenty of time to ride out volatility. However, funds with weak liquidity don’t have that luxury in the current volatility.

S&P Global Ratings analyst Todd Kanaster and team said in a recent report that because of the latest market downturn, public pension funds in the U.S. may experience liquidity stress in trying to cover their benefit payments.

During times of continuing volatility, funds may have to sell assets at a loss if their liquidity is weak. As a result, their funded ratios could decrease even more than they already are. They believe poor funding levels and high discount rates could suggest "excessive liquidity risk" for public pension funds.

They said U.S. pension plans hold 1% of their target portfolios in cash and short-term investments, on average. Those holdings are then used to pay benefits and administrative expenses. S&P Global uses a liquidity-to-assets ratio to determine the liquidity risk of individual public pension plans.

If the ratio is negative, it means the pension fund needs more money to continue operating and make all of its benefit payments. The more the ratio is below zero, the more assets will need to be converted to cash just to keep operating and paying benefits.

"In a typical year, cash flows may be supplemented by realizing positive investment returns," the S&P Global team wrote. "However, the selling of non-cash assets, as during the current severe market downturn, may lead to large losses."

They see a direct correlation between a fund's discount rate and its underlying target portfolio. The discount rate is usually the assumed return in the public sector. If returns are assumed to be high, it means the portfolio accepts a high level of risk, sometimes suggesting a low percentage of cash.

They added that public pension funds that already had weak funded ratios and limited cash on hand may have to liquidate some of their longer-term investments to make their benefit payments. This will erode their earning power and continue to cycle, worsening their funded status even further.

For example, they explain that funds set a target allocation at inception so that cash will be 1% of the portfolio. However, if the pension plan is poorly funded at 40%, then only 40% of the necessary cash would be on hand. They also note that not all public pension funds with weak funded ratios will face liquidity pressure because the target portfolio allocation can always be rebalanced.

Some funds were already negative

Some public pension funds could even be in danger of running out of money to make benefit payments, they warned. They identified several plans which they describe as "severely underfunded," which are those that are less than 40% funded. These pension plans already had negative liquidity-to-assets ratios as of September. That means they are in extremely dire straits in this latest bout of volatility.

The S&P Global team said these funds could have negative available cash, requiring more financing or asset sales to provide support in the short term. That could speed up the pace at which they become insolvent. The funds with ratios above zero could face significant deterioration if the market downturn is prolonged and especially severe. 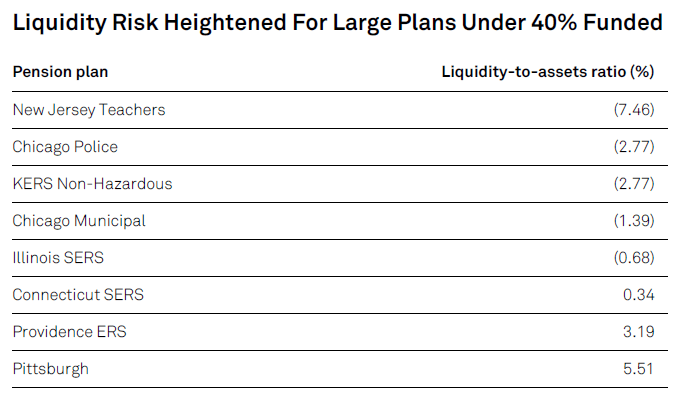 They also called attention to one other area that could strain the liquidity of some public pension plans. Costs associated with other postemployment benefits (OPEB) are set to rise in the near-to-medium term due to the coronavirus pandemic. In most cases, these costs are pay as you go, which means that if benefits aren't reduced, there's no room to reduce or delay contributions.

"Legal and practical flexibility of benefit reductions may dictate how much OPEB costs affect funds that may be needed for pensions or other budgetary concerns," they wrote.

They warn that even after the market downturn ends, pension plans are likely to face continued deterioration.

"Employer and plan sponsor budgets are going through a concurrent period of stress, so as sponsor and pension plans adjust budgets, they may look to defer contributions for budgetary relief," they said.

Some potential steps that would come at the expense of funding the pension plan are extended amortization payments, temporary asset smoothing or other contribution deferrals. The S&P Global team said state and local governments whose fiscal flexibility is limited and have weak economic metrics will be more likely to consider deferral options.

Like in the years after the last recession, they believe many public finance agencies in the U.S. will come out looking to make changes to plan design and benefits to find relief for their budgets.