Last Monday, New Jersey-based activist fund Raging Capital Management urged Park Aerospace to use its “cash-rich balance sheet” to initiate a share buyback in a bid to correct the firm’s undervalued stock. Park responded a day later, saying it will review the activist’s calls but any action on buybacks would have to wait until May.

Park Aerospace Should Take Advantagge Of The Current Environment

Raging, a 6.2% shareholder, argued that Park Aerospace should “take advantage of the current stressed market environment” and use its cash position, which stood at $140 million at the end of 2019, to expand its share buyback program. This would "further enhance and bolster long-term shareholder value," the activist reckoned, after the firm’s stock, which has been trading between $16 and $23 per share over the past two years, recently dived to $10.

The aerospace company noted, however, that it already has an existing 1.4 million shares buyback program in place. It also said the company is currently in a "black-out" period and therefore is not able to buy its stock on the open market until after it announces fiscal year and fourth quarter results on or before May 15.

Spruce Point Capital Management published an analysis of WD-40 last week, within which the short seller said the company is overexposed to a financial crisis as it faces "both long and short-term secular pressures," which could ultimately wipe out as much as 60% of the firm’s market capitalization. Spruce Point claimed that the "record bloated inventories and material financial strain" that it found are bound to force the company to "drastically" reduce its sales target and "re-set [sic] investor expectations meaningfully lower."

The report questioned WD-40’s recent decision to draw down the remainder of its $150 million credit facility, suggesting this made no financial sense when analyzing the firm’s optimistic sales guidance. This "gigantic" drawdown, in Spruce Point’s opinion, exposed “a major hole and problem” with the firm’s business.

WD-40 lacks patents and relies on a trade secret to protect its market share from competitors offering low-priced products, the report noted. The firm would also be hit by the upcoming wave of electric cars as its heaviest users are maintenance and repair specialists, notably in the auto market, the short seller argued. Spruce Point deemed the firm’s growth targets for this year and next as "widely optimistic," and estimated that WD-40 will "repeatedly miss" these "aggressive" forecasts, which would, in turn, prompt a re-rating of the stock.

The short seller also flagged insider sales that led to directors and officers owning just 1.9% of WD-40, a record low. The insiders "materially reduce their ownership and capital at-risk" by "misdirecting 62% of total free cash flow since 2007 towards stock repurchases at increasingly inflated prices," according to the report. Before the short report, the company's value stood at roughly $2.7 billion, an "excessive valuation" in Spruce Point's opinion and the main obstacle to a potential takeover.

The number of settlements in connection with public activist demands for board representation globally, between January 01 and April 03 of each year. 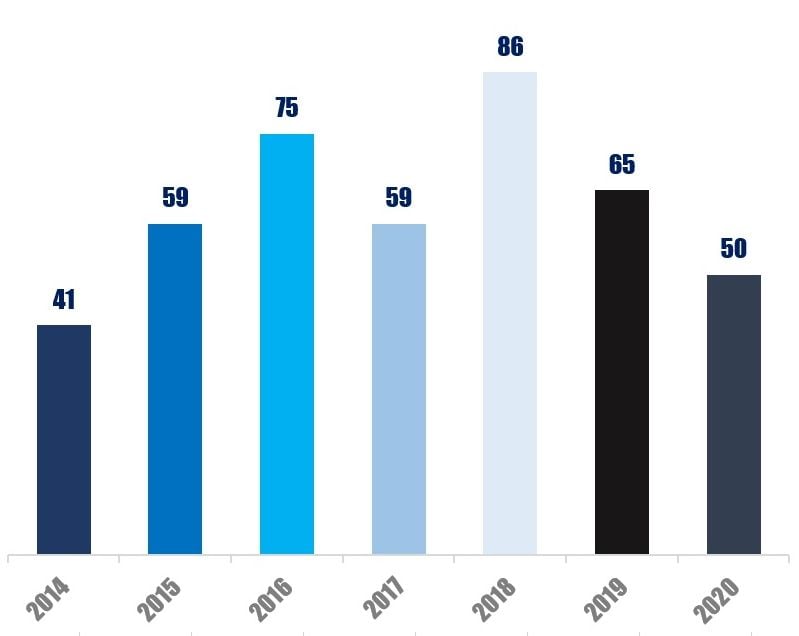