March was one of the worst months for liquidity downgrades in 18 years, according to Moody’s Investors Service. In a recent report, the firm said its Moody’s Liquidity Stress Indicator jumped from 4.5% in February to 6.8% in March.

A terrible month for liquidity downgrades

In March, Moody's recorded 84 liquidity downgrades. Of those downgrades, 17 involved cuts to SGL-4. The total put downgrades to upgrades at 4.2 times, which is on par with the 2008-2009 recession. However, it's a little better than the 5.08 times recorded during the energy crisis in late 2015.

Unlike the energy crisis, last months' liquidity downgrades went far beyond just oil and gas. The coronavirus pandemic is impacting most industries, including everything from consumer products to automotive, healthcare services, retail and travel. However, energy is also still on the front line amid the plunge in oil prices.

Moody's said all of these stresses are causing "severe and extensive credit shocks across sectors, regions and markets."

"Many vulnerable, lower rated, highly leveraged companies will continue to succumb to performance woes and high leverage, which will push the default rate sharply higher by the end of the year from its current 4.5%," the Moody's team warned.

They put together three default scenarios to show how bad things could get. They said the severity of current macroeconomic conditions seems similar to how it was during the Global Financial Crisis. Moody's three scenarios put the default forecast for U.S. speculative grade corporates at 7.7%, 16.2% or 18.4% by the end of the year.

The Moody's team said companies that are more vulnerable will find access to the credit market to be elusive as they try to finance upcoming maturities and other needs. They noted that issuance for most speculative-grade corporates has halted, and they expect the situation to worsen for many companies waiting to address their upcoming maturities.

They add that U.S. high-yield bond spreads have widened to 990 basis points as of April 2. That's about three times wider than where spreads were at the beginning of the year, according to data from Barclays.

They add that most companies came into the coronavirus pandemic with fairly healthy maturity profiles. However, those with maturities this year and next year may find access to the market to be either extremely limited or, for the weakest companies, totally unavailable.

Moody's said speculative-grade maturities coming this year and next year total $106 billion. Most of them have instrument ratings of B2 or lower, and 38% of them are rated B3 or lower.

The restaurants, apparel and retail sector saw 10 liquidity downgrades. Retailer Lands' End fell to SGL-4 due to upcoming maturity concerns. Oil and gas led the way in SGL downgrades at 19. Give companies fell to SGL-4, and three of them declined due to upcoming maturity concerns. They are Denbury Resources, Whiting Petroleum and Forum Energy Technologies.

Some of those that were upgraded in March face uncertainties about whether they will be able to meet their upcoming maturities. The Moody's team said risk conditions have deteriorated very quickly:

Their Liquidity Stress Indicator, B3 Negative List and default forecast all flashed red. Their B3 Negative and Lower Corporate Ratings List reached its highest reading ever at 311 companies. The previous peak was 291 companies during the 2009 credit crisis and commodity-related downturn in April 2016.

March was the fourth consecutive month their B3 Negative list was above its three-month rolling average. As a percentage of the total rated speculative-grade population, it was at 20.7%. That's above the long-term average of 14.8% and just 5.5% below the record high of 26.1% during the Great Recession.

Pandemic being felt across industries

The Moody's team added that the coronavirus pandemic is being felt across industries. Five industries have surpassed 10%, which they said "indicates a more worrisome concentration of SGL-4 issuers." That's the weakest liquidity score. In February, only two industries were above 10%.

Consumer Products and Proteins was at 12.8% in February, and it climbed to 15% in March on the back of several liquidity downgrades due to performance and debt maturity issues. Automotive and Energy E&P climbed to second and third on the list.

Healthcare Services and Products held in the same position on the list. Retail had the third highest number of defaults among U.S. corporate industries last year. It climbed above 10% due to 10 liquidity downgrades. 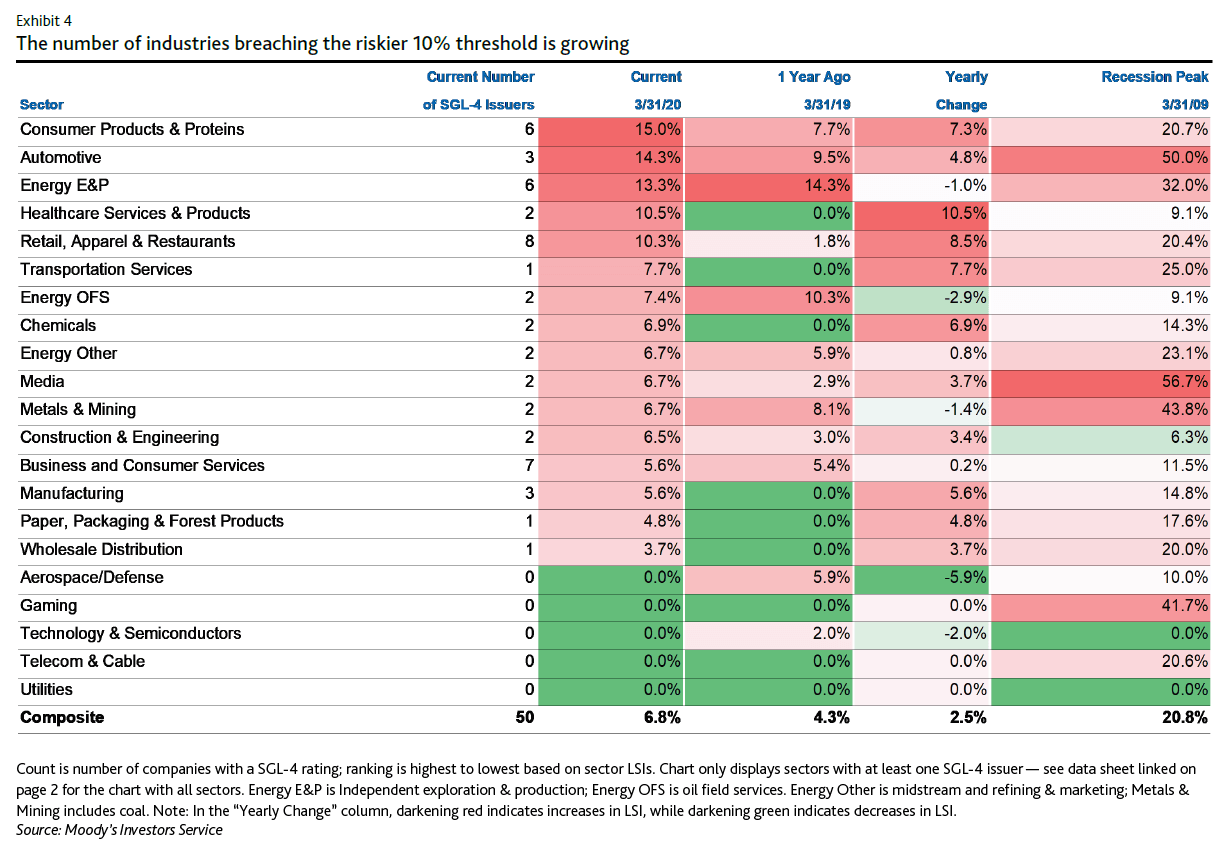