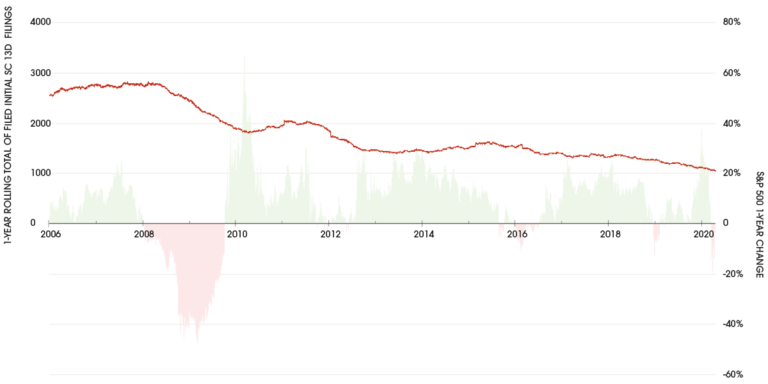 One of the questions we’ve been asked most frequently over the last couple of months is what happened to activism during and after the Global Financial Crisis in 2008 and 2009. Discussions with market players who went through that event point to two major changes. One is that the 2008 crisis was a banking-led liquidity crunch that put pressure on many activist hedge funds by sending limited partners rushing to redeem capital and led to a lull in new investments. The other take is that, while 2008 was quiet, activism came back strongly in the immediate aftermath of the crisis as a stabilizing market left many companies exposed, both in terms of performance and governance.  To an extent, both are true. Activist Insight calculates that the number of initial 13D filings, which disclose a new stake of over 5% for an investor with intent to influence the company, remained stable in 2007 and then fell quite quickly. 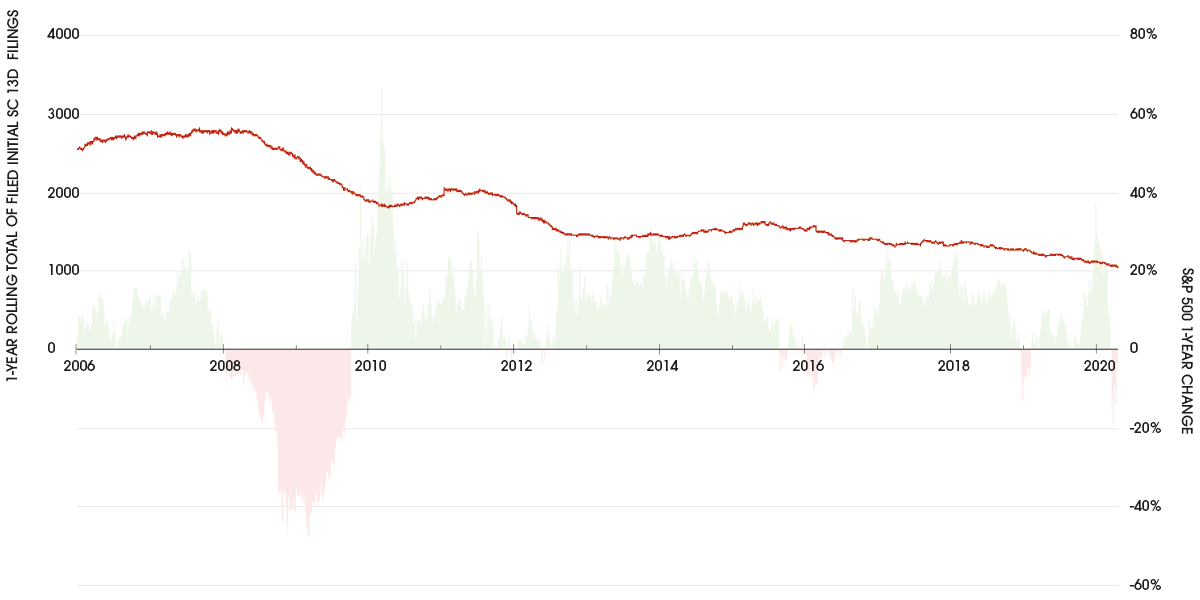 But 13D filings contain a lot of "noise" – all shareholders owning more than 20% of a stock file them, some activists file them even on passive trades, and influence is a broad term that encompasses everything from control to a board seat or a financing agreement. Perhaps most persuasively, initial 13D filings have continued to fall dramatically so that 2019 represented only 40% of 2007’s total. Activist Insight Online demands data suggest that activism has grown significantly in recent years – a trend that might not show up in the 13D filings because 5% stakes have become less important as activists have targeted larger companies or wielded influence with smaller positions.

A better measure might be definitive contested proxy statements (form DEFC14A) filed with the Securities and Exchange Commission (SEC). DEFC forms are filed on behalf of the management and dissident slates in proxy contests for board seats, and occasionally by activists in withhold campaigns and contested M&A solicitations. That leaves out some kinds of campaign and plenty of situations that settled, not to mention activist campaigns abroad. But it does provide a reference point we might call contested situations with a couple of big asterisks. Several activist lawyers confirmed that DEFCs should be a useful proxy for contested situations (pardon the pun). 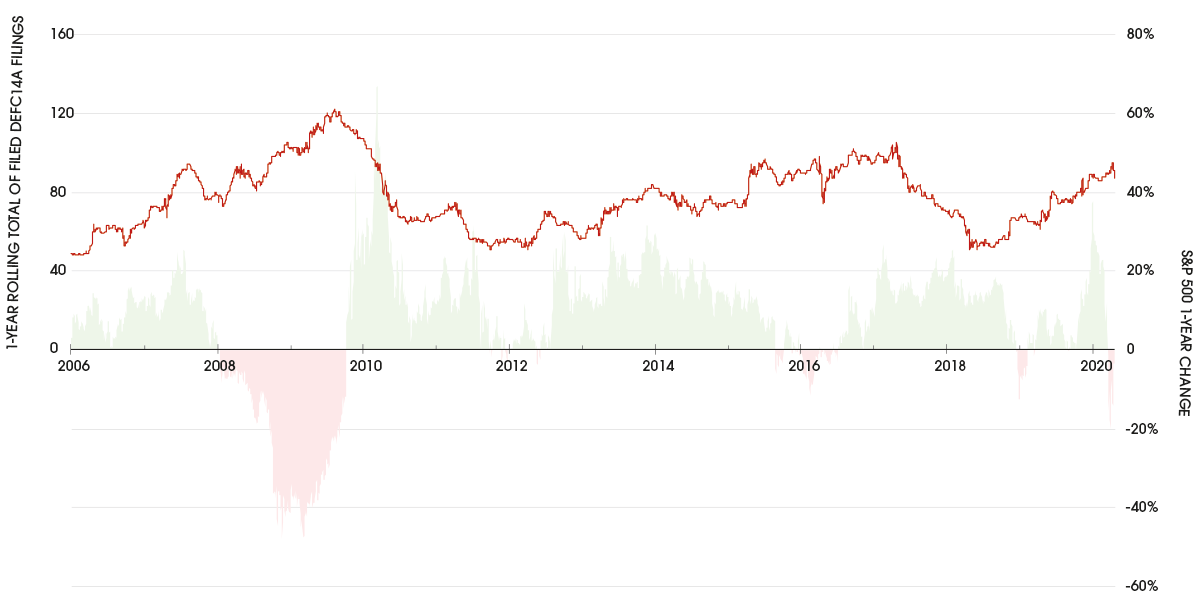 These data suggest a few conclusions. First, DEFC filings spiked in the first half of 2009 beyond anything we’ve seen since – so, a post-crisis spike in contested situations does bear out. Second, 2019 also saw a spike in contested solicitations after the volatility at the end of 2018 but only after a slow start to the year (slower in the first quarter, in fact, than in the first three months of 2020).

Third, 2020 is off to a fairly slow start, although this is partly due to a very busy second half of 2019 for DEFC filings. Of the 14 years from 2007 to 2020, just two first-quarter periods saw fewer DEFCs filed than in 2020. Though 2019 rebounded quickly and ended up a busy year for contested situations, that doesn’t look as likely this year.

This may just be a short-lived trend, however, as the market and activists alike adjust to the new normal. Many advisers expect activism to come roaring back once the uncertainty is over. That may be the case, but if 2021 is a repeat of 2009, there could be leaner years to follow.

On the topic of contested situations, next week presents an interesting test for activists. Two proxy contests go to a vote, at USA Technologies and Tegna, with Institutional Shareholder Services giving at least a partial recommendation to the dissidents in both cases. An upset, particularly in the more closely-matched Tegna vote, might have an impact on those proxy contests still to come.

Quote of the week comes from Loïc Dessaint, CEO of French proxy voting adviser Proxinvest, commenting on its recommendation at Lagardère, which is in a proxy contest with Amber Capital. Dessaint exclusively told Activist Insight Online:

"I do think that supporting a mixed board made of the former board and new members is a mistake and would not be constructive enough to help ending the outdated governance structure and that a complete refreshing of the board is needed to negotiate with the unlimited partner and CEO Arnaud Lagardère."