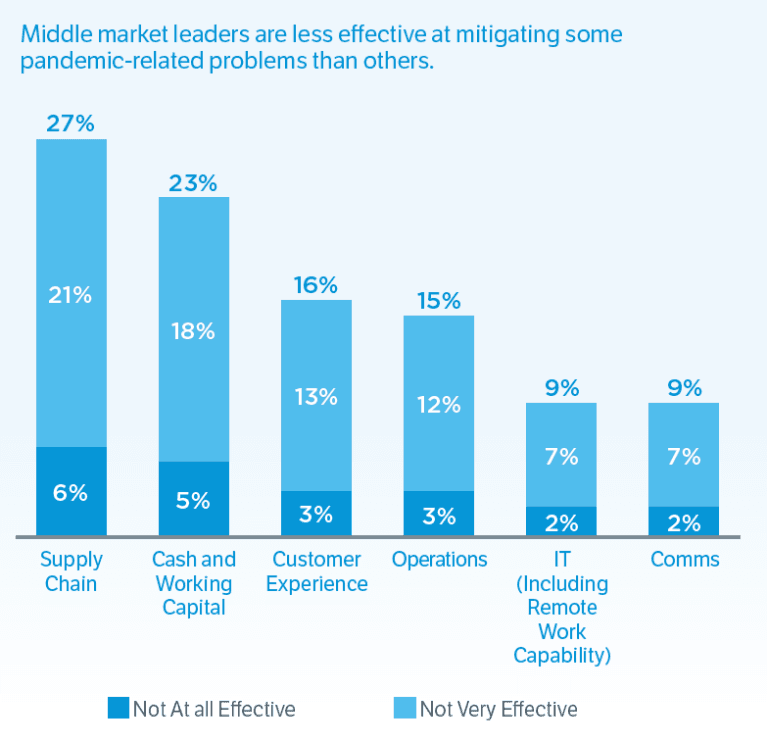 COLUMBUS, OH — The National Center for the Middle Market (NCMM) announced today that the coronavirus (COVID-19) pandemic will have a catastrophic impact on as many as 25 percent of U.S. middle market companies. 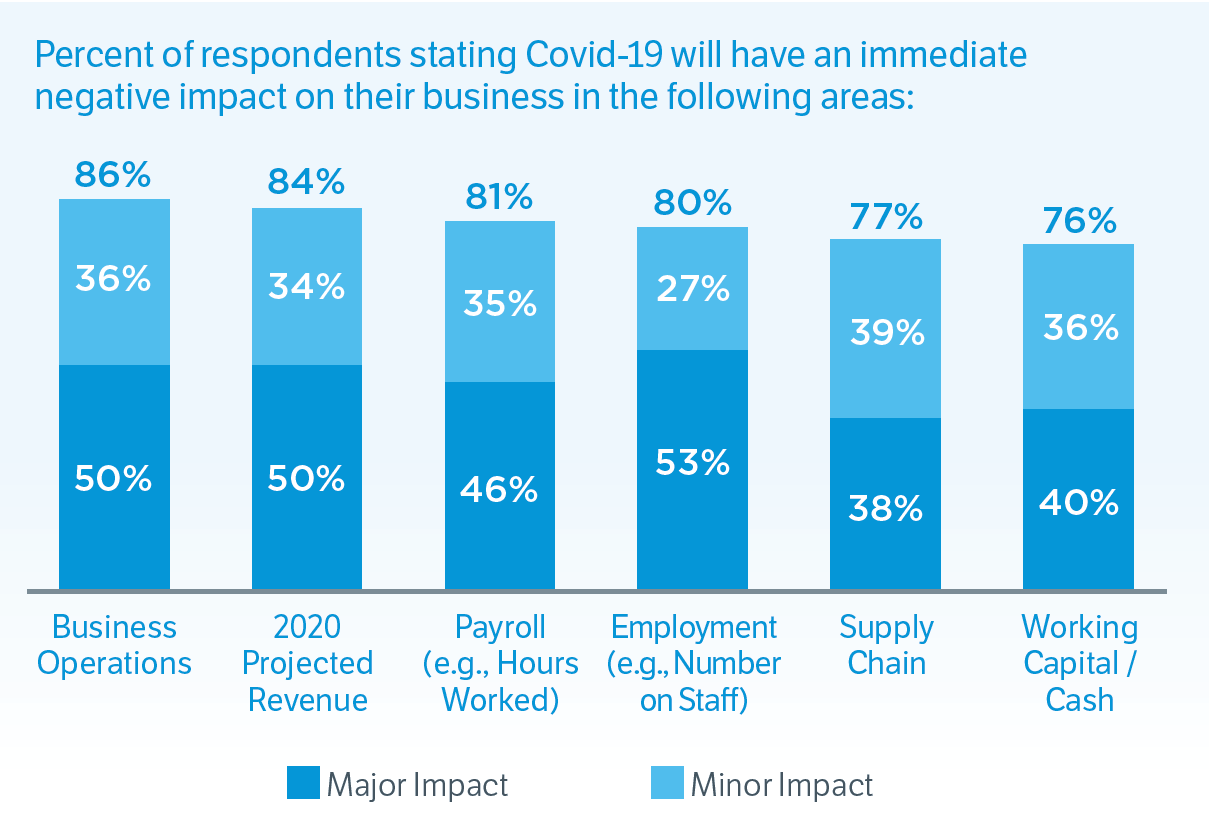 Coronavirus To Have A Negative Impact On Middle Market Companies' Revenue

A survey conducted by the NCMM of more 250 middle market executives from March 23-25, 2020, shows that nearly all middle market companies foresee some negative impact on revenue:

At the same time, however, executives said they expect to be able to get back on their feet relatively quickly when the pandemic abates, with more than half predicting they will be able to resume normal operations within six months of the pandemic’s coming under control.

“This is a dramatic turn,” said Thomas A. Stewart, executive director of the NCMM. “We talked to these very same companies three months earlier, when they were predicting revenue to grow 5.8 percent and employment to rise 3.2 percent. Most of those hopes and plans are out the window.” 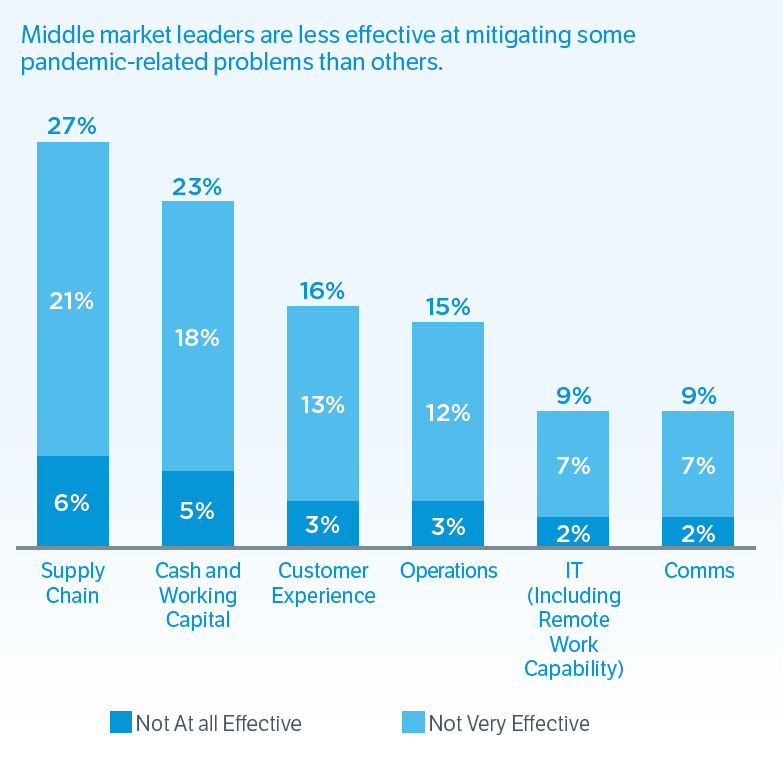 Of the companies surveyed, 70 percent said they planned to defer or cancel previously planned expansion into new markets. In addition, 66 percent said they would put aside plans to invest in new plants or facilities. Instead, companies are struggling to comprehend the extent of the impact of the pandemic. A majority, 51 percent, say that the overall uncertainty is the biggest challenge they face.

Despite the impact on middle market, the picture, is not altogether bleak. Though overall operations have been disrupted, the communications and technology backbones of companies are in relatively good shape, with only 9 percent of companies reporting ineffective management of each. 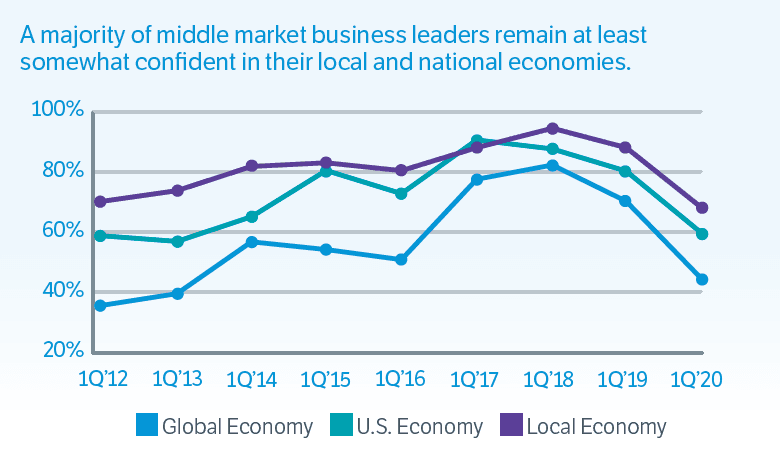 Middle Market Is Confident In Its Own Abilities

Despite the short-term challenges, the middle market is also showing signs of resilience and, equally important, of confidence in its own abilities. Executives’ confidence in the economy has dropped quite a lot, unsurprisingly; but 60 percent express at least some degree of confidence in the U.S. economy and 69 percent in the local economy — numbers comparable to their sentiment in 2013, three years into the economic recovery from the Great Recession.

“The middle market makes up a full third of the U.S. economy,” said NCMM Managing Director Doug Farren. “How those companies recover from this will set the tone for the rest of the nation.”

The full data and report can be found on the NCMM website. The NCMM will continue to track middle market sentiment in the coming months, and further updates will be detailed in its first-half Middle Market Indicator releasing in mid-July.

After the World Health Organization declared COVID-19 a pandemic, the National Center for the Middle Market surveyed 260 executives of U.S. middle market companies to take the pulse of the most critical segment of the American economy. All of the survey respondents also participated in the Q4 2019 Middle Market Indicator survey, fielded in December 2019. The results in this pulse report highlight the current and anticipated future impact of COVID-19 on business operations and reflect how the sentiment of middle market leaders has changed over the past three months due to the COVID-19 pandemic. Participants completed the survey from March 23-25, 2020.

About the National Center for the Middle Market (NCMM)

The National Center for the Middle Market is a collaboration between The Ohio State University Fisher College of Business and Chubb.