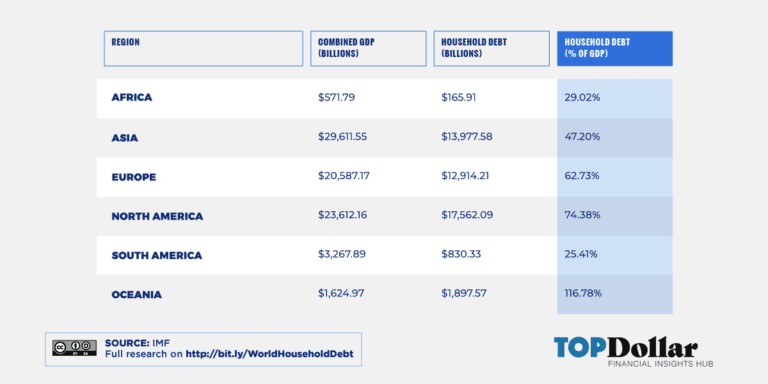 America is in debt. American household debt is at an all-time high. Last time we reached an all-time high was 2008 – so why again now? Today’s generous interest rates are stimulating people to take mortgages, loans, and credit cards. But these debt curves are seen beyond US borders too. Curious to find out just how the world’s household debt stacks up, the people at Top Dollar did their research, and have created a suite of new data visualizations to show how national household debts compare across the world. 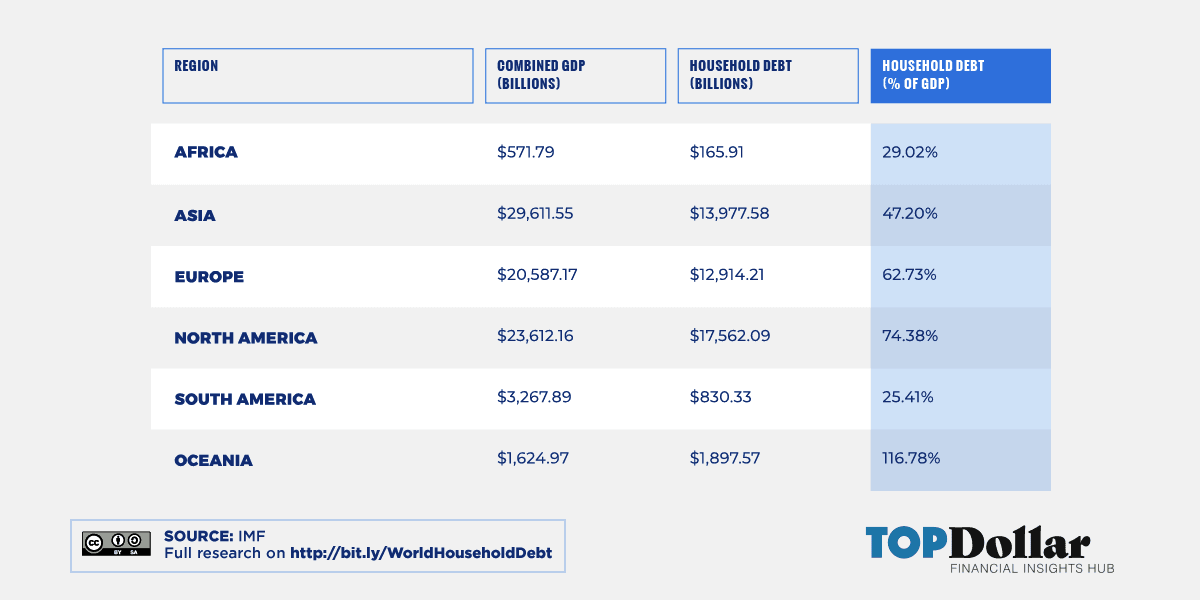 The organization’s research showed that American households have twice the debt of any other country, although we are reassured that the growing economy means this need not be a cause for concern. Meanwhile, China has the fastest debt growth, leaping from 17.8% of GDP in 2008 to 54.2% a decade on. This is put down to the country’s blossoming middle-class, and it will be a matter of careful control – cushioned by China’s flourishing consumer economy – to keep the situation buoyant.

Several countries that are often held up as economic success stories are currently swimming in household debt. Norway, Canada, the Netherlands, and Switzerland are among those whose debt levels are above 100% of GDP.

Impact Of The Coronavirus Crisis

Household debt around the world adds up to an unimaginable $47.3 trillion, around 60% of global GDP. In the US, household debt is higher than average - 75.9% of GDP – although it was tipping 100% in 2007. With the coronavirus crisis sure to hit economies all over, massive support and understanding is required for and by those in debt, and a complete socialist reform needed to help people to live within their means in future to avoid recurring disasters.

On a continental level, it is notable that Asia, Europe, and North America together account for almost all of the household debt in the world. In fact, Oceania is also highly in debt – with a 116.8% rate against GDP. Sixteen countries had a GDP of $1 trillion-plus, and of these only India, Russia, Mexico, and Indonesia have debt at less than 20% of GDP. What we’re seeing is that regardless the health of the national economy, countries in South America, Asia, and Africa retail relatively little household debt.

Debt has risen at a regular rate since the 2008 ‘crunch.’ But looking at the data visualizations, those countries whose economy has grown healthily seem look to be in control of household debt. Other countries are gambling with super-low interest rates, and the outcome will depend on how folk cope with making payments during the economic fall-out of coronavirus.

Prepare For A Recession

Unfortunately, trends from 2008-2018 may be moot at the moment. We can learn from the past, but all bets are off (if only!) as far as following the curve is concerned. Instead, we must prepare for “a recession at least as bad as during the global financial crisis or worse,” according to IMF managing director Kristalina Georgieva. “We will massively step up emergency finance,” she adds, “nearly 80 countries are requesting our help—and we are working closely with the other international financial institutions to provide a strong coordinated response.”

It’s clear that what the world needs now is love, patience, tolerance, and mutual support. For those in a position of wealth or power, the time has come to put avarice aside and to use your cash and influence selflessly and heroically.