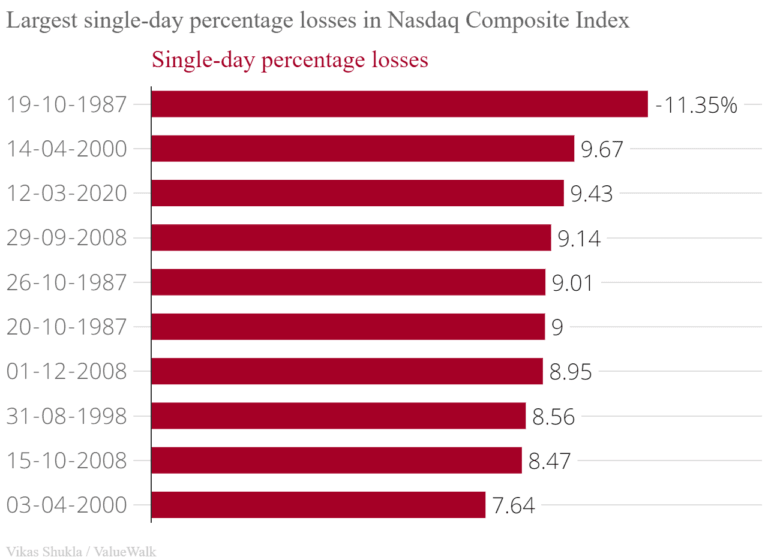 Global stock markets have declined dramatically in the last few weeks amid the coronavirus outbreak. The COVID-19 pandemic is haunting dozens of countries worldwide. The oil price war between Saudi Arabia and Russia has further fueled panic among investors. The US stock markets witnessed steep single-day falls in the last 2-3 weeks. There is no telling whether the markets would crash further in the coming weeks. Here we take a look at the top ten largest single-day falls in the US stock market history.

Overall, there have been 172,730 confirmed coronavirus cases and 6,658 deaths worldwide. The historic stock market declines in the first half of March ended the longest-running bull market ever. The S&P 500, the Dow, and the Nasdaq Composite have entered the bear territory. Surprisingly, the S&P 500 was hitting new all-time highs only a few weeks ago.

President Donald Trump has announced a nation-wide emergency to contain the coronavirus outbreak. The US has also imposed a travel ban on Europe, the UK, and Ireland. The Federal Reserve has slashed the rates to revive investor confidence. Trump has also announced a special package for small businesses.

If you look at the largest single-day point losses in the S&P 500’s history, the top four have occurred in the last one month. These four days – Feb.27, March 11, March 09, and March 12 – drove the index from an all-time high to the bear territory. This shouldn’t come as a surprise because the index value has risen significantly over the last several decades. 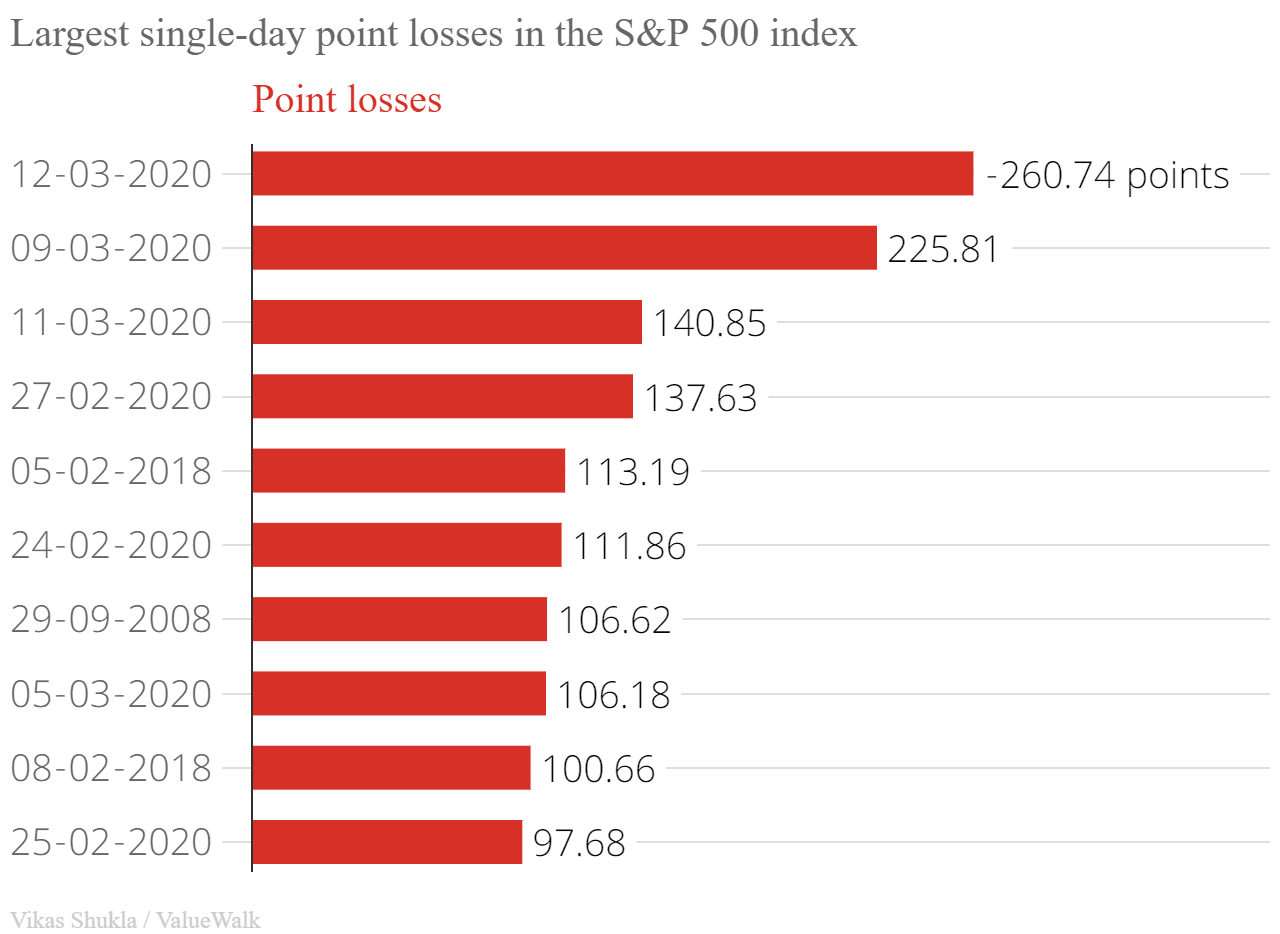 The point losses don’t tell the whole story. It makes sense to also look at the percentage losses, which put the recent declines in historical perspective. Only the March 12 decline made it to the top ten in percentage terms. The biggest percentage loss occurred on October 19, 1987, in what is now known as Black Monday. 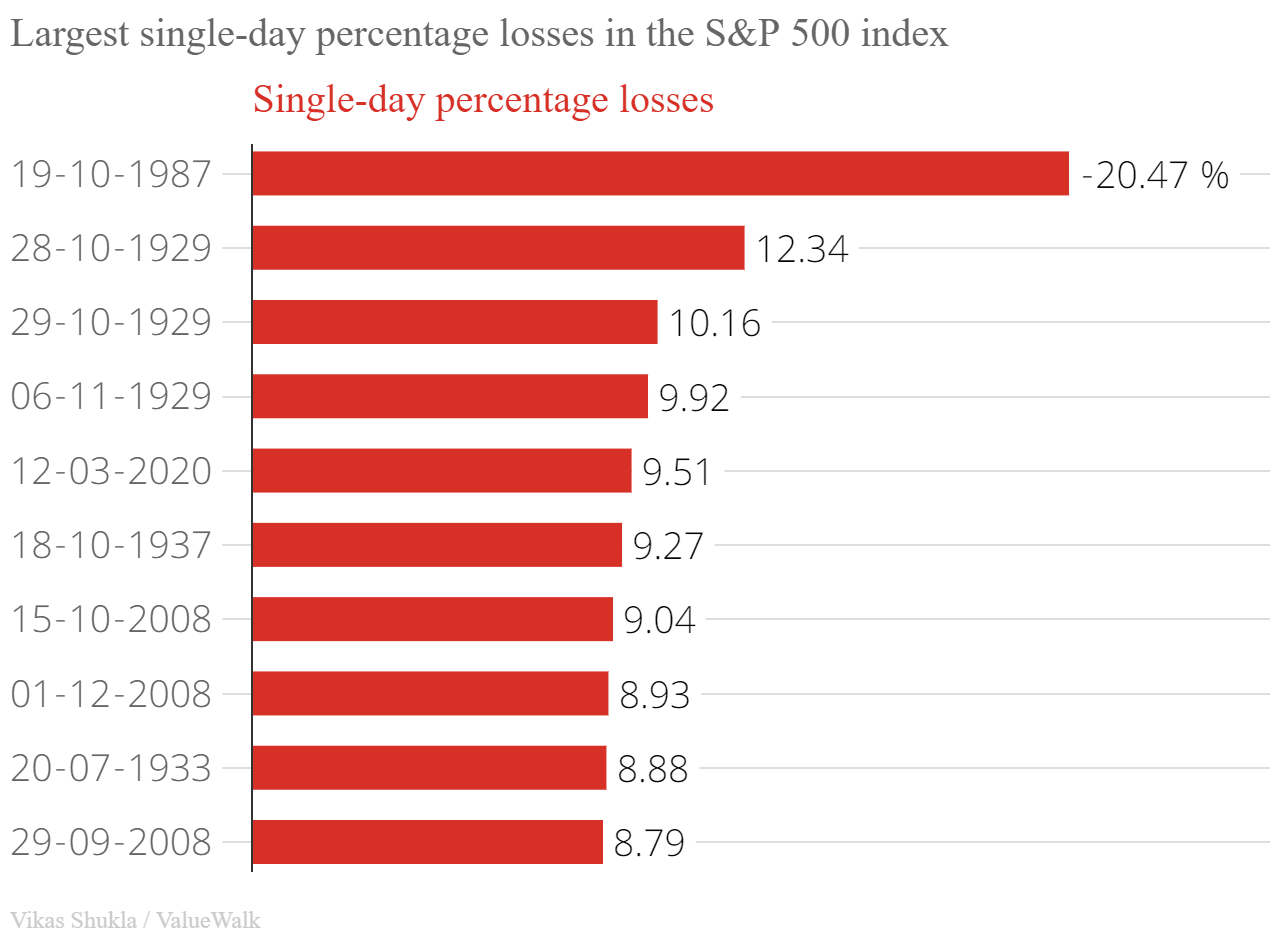 The DJIA fell as much as 2,352 points on Thursday, March 12. It was the biggest single-day point decline since the inception of Dow Jones Industrial Average in 1896. Notably, all of the ten biggest single-day losses happened in 2018 or 2020. 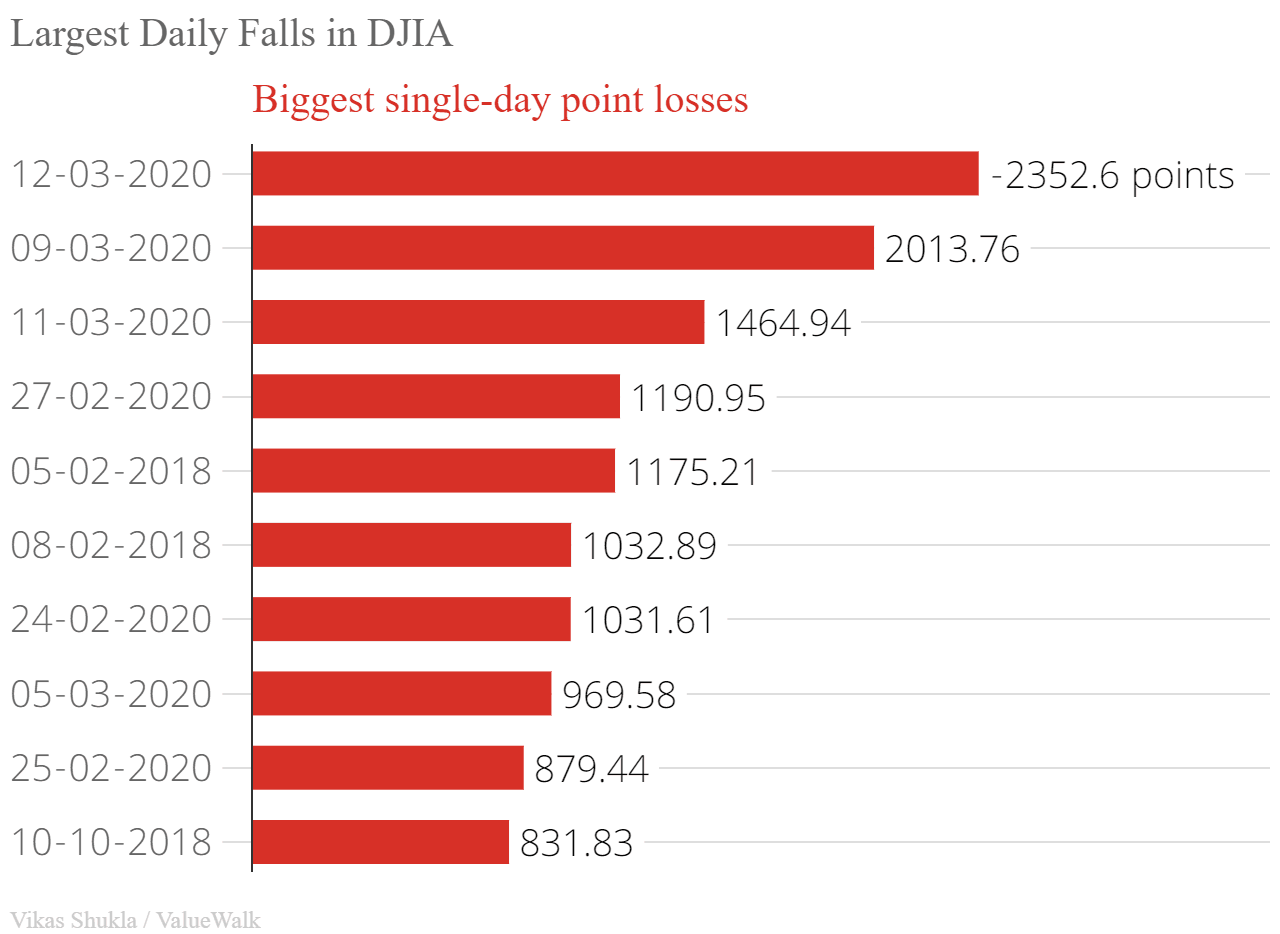 Even in percentage terms, the March 12 fall was among the biggest in the US stock market history. The Black Monday of 1987 still holds the title of the largest single-day decline in the Dow. 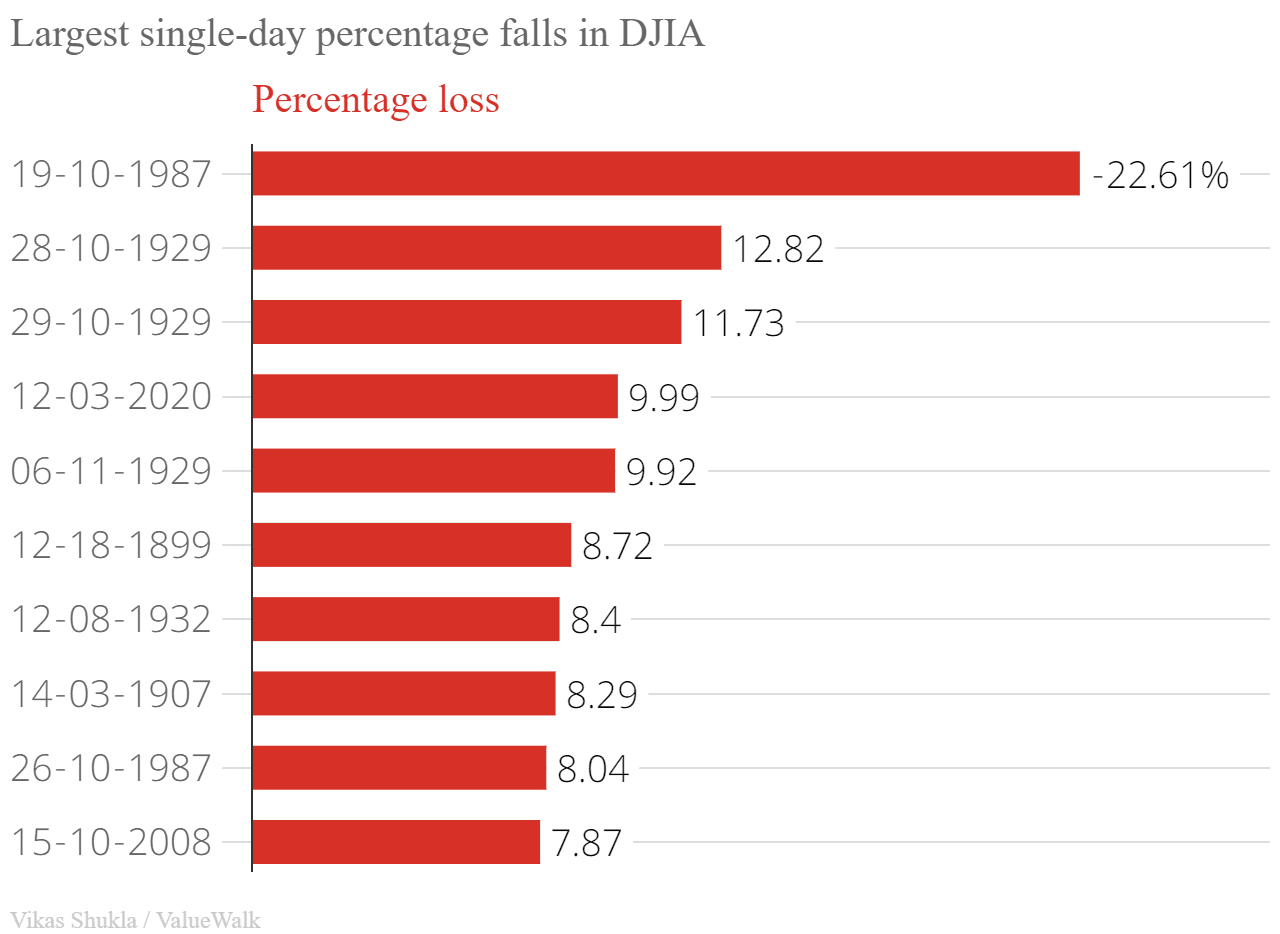 Introduced in 1971, Nasdaq Composite is still a child compared to the S&P 500 and DJIA. But the tech-heavy index is massive  when it comes to market capitalization. Just like the other two indices, Nasdaq Composite suffered heavy losses in the last few weeks. All of the top four biggest single-day falls ever happened in 2020. 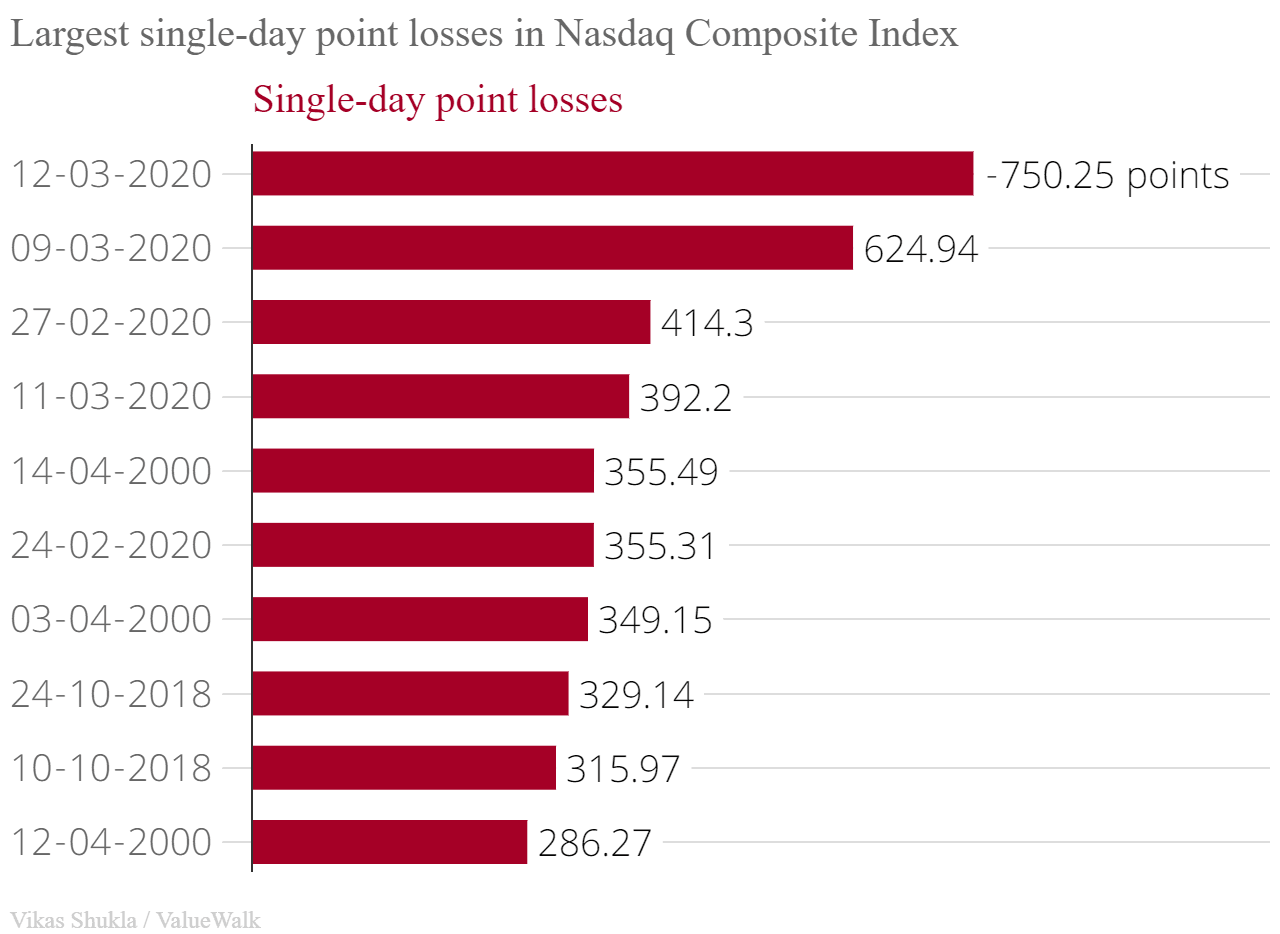 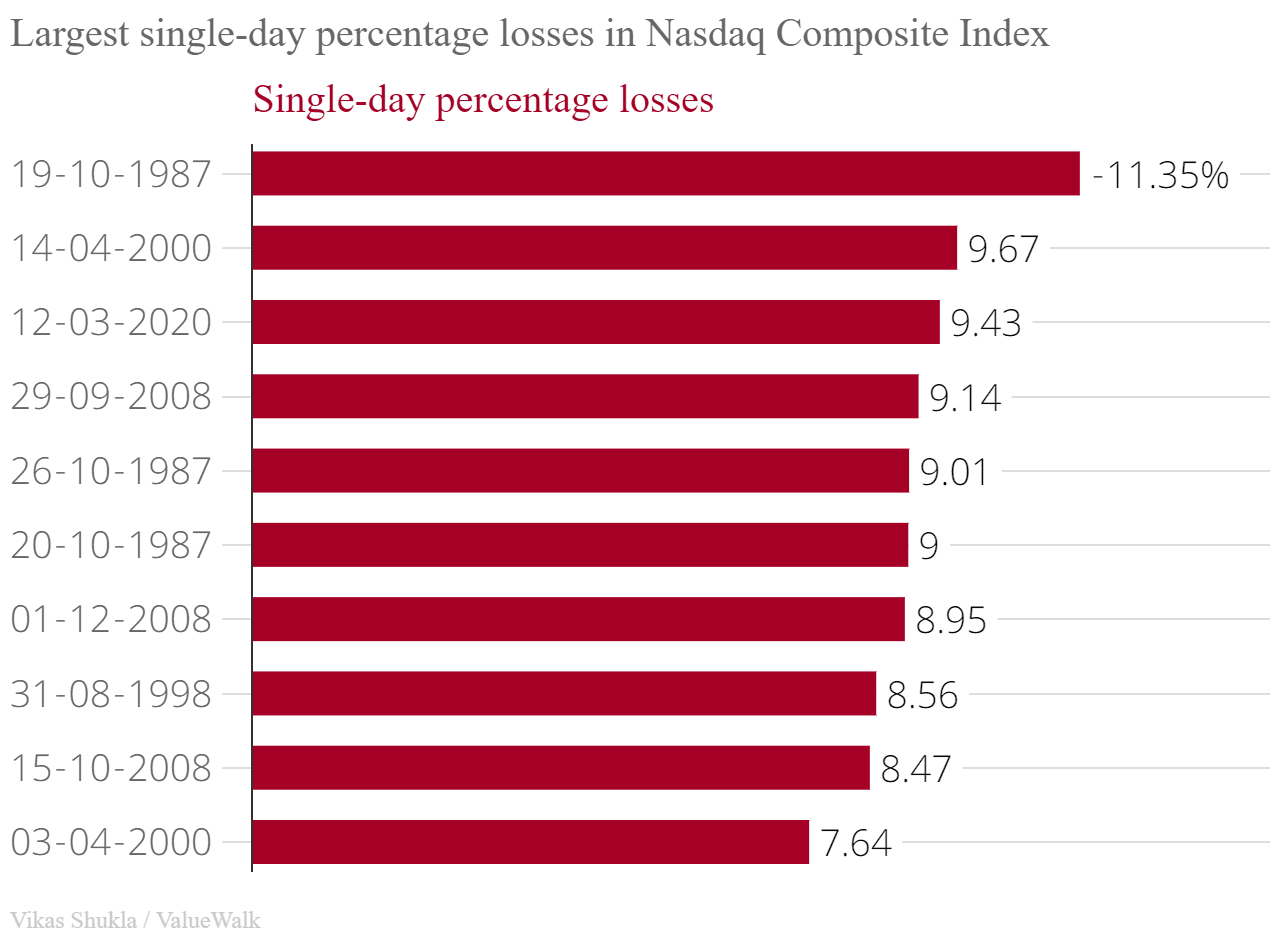 Towards the end of 2019, almost all analysts and experts predicted a stock market crash in 2020. The markets are indeed in a downward spiral, but not due to the reasons cited by analysts. No expert had a clue about the coronavirus having such a huge impact on the global economy. In the long-run, these declines would seem like excellent buying opportunities. Meanwhile, if you are worried, read our guide to protecting your money during the current market downturn.