ValueWalk
Home Business Steep Sell-Offs: Value Thrashed And Due For A Rebound 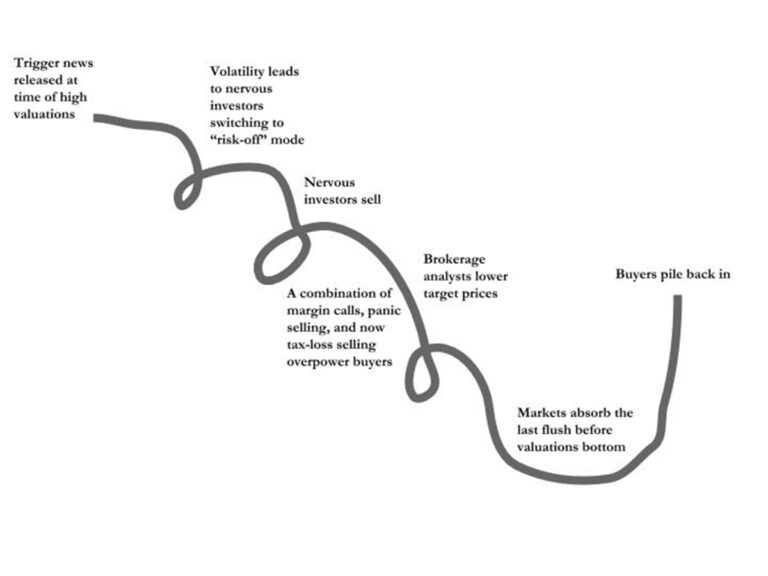 I have been receiving plenty of messages as of late, mostly from friends I haven’t spoken to in a while. It was clear they were interested in my thoughts regarding the recent market sell-off, given as a money manager I think about investing all day and all night.

Steep Sell-Offs: Value Thrashed And Due For A Rebound

One may think statistical cheapness acts as a buffer during steep sell-offs, especially after an 11 year bull run. That simply isn’t true, at least in the short run. Why is that? Certainly those lower growth and boring companies that didn’t keep up with the high flying tech companies on the way up should have fared better on the way down. After all, there is less hot air to release from those stocks, no? Instead, what I have observed (multiple times) on Ground Zero is that value stocks get throttled just as hard, if not even harder, during market sell-offs.

The following is an illustration I shared in my Q4 2018 letter to highlight the qualitative mechanics of a steep sell-off: 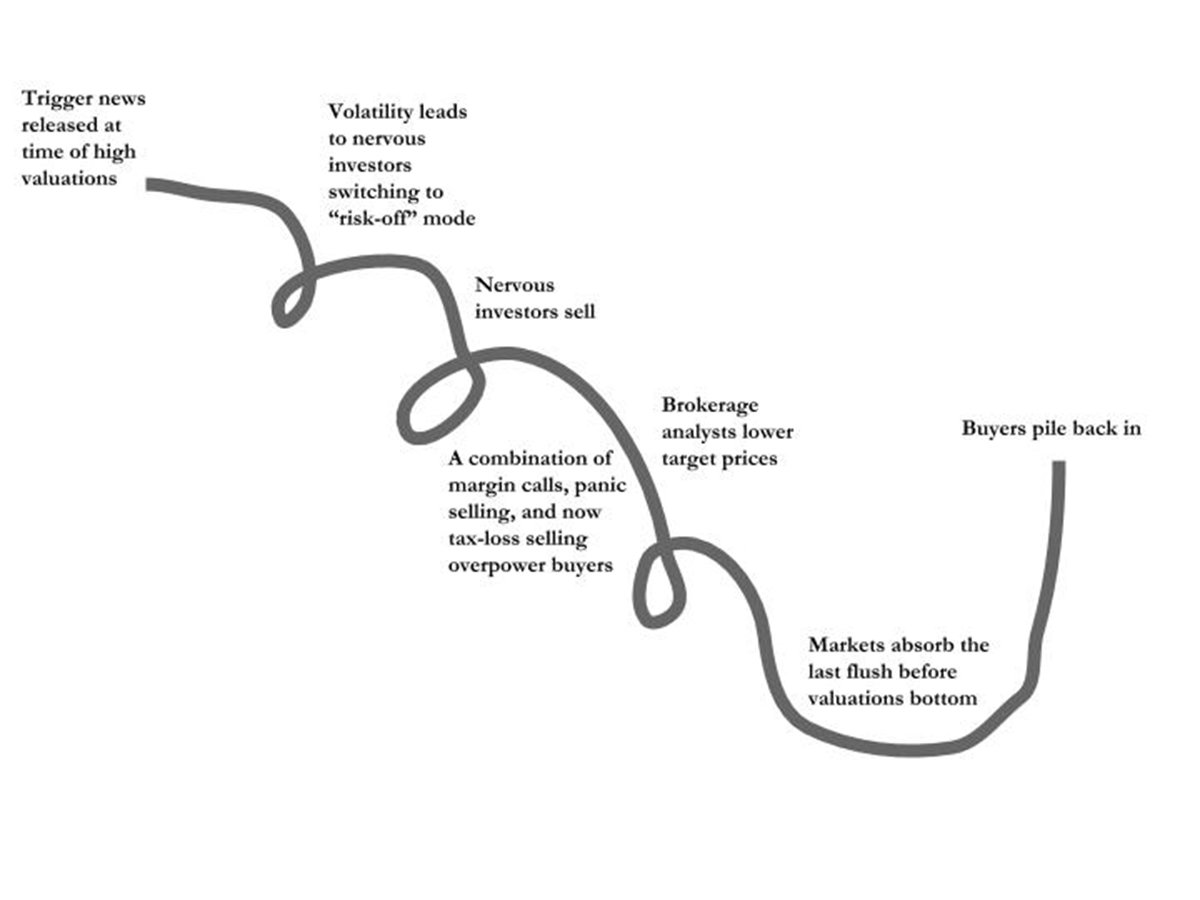 As I previously explained, a sell-off is akin to a self reinforcing chain reaction. There are few places to hide in the vortex. Some kind of trigger event - in this case COVID-19 - acts as a ‘pin prick’ at a market peak. Initial panic causes the first leg down, which then spurs a cocktail of stop loss orders, margin calls, more panic selling, and automated selling from quant funds. The pinball then bounces to investors who get discouraged or panicked, and this leads to another round of selling. Brokerage analysts then lower their target prices very much ‘after the fact’.  Eventually the vicious cycle peters out, setting the stage for any positive news to cause buyers to pile back in.

The above passage does not attempt to describe the market action since February 19 with any accuracy. My point is that prices can temporarily - and completely - disconnect with fundamentals. It is impossible to quantify the dollar amount of a sell-off that is attributable to quant funds vs. panicked retail investors etc. All factors compound against each other. In other words, we can understand approximately what is happening, but without any precision. This makes it difficult to predict the length, severity or contours of a market correction.

Besides the steepness and speed of the COVID-19 market crash, it is different from the late 2018 sell-off in two key aspects. First, the 2018 crash didn’t affect most of our daily routines.  Second, the earnings and operations of companies were largely unimpacted. With COVID-19, the opposite is true.

Social isolation and drastic measures by governments have triggered a visceral feeling of panic for many - and the media has enjoyed fanning the flames in contributing to the fear. No human being’s decision making is totally immune to emotion. For example, a good friend of mine informed me last Thursday (the largest daily decline in the TSX in 80 years) that he liquidated all his stock holdings after incurring a 27% drop in market value. This individual has a graduate degree from a top university and also 20 years of experience in the investment industry. His action may prove to be right if the bottom is far below from this level, but my point is that this ‘crisis’ has been a perfect catalyst in spurring emotional decisions.

COVID-19 and the economy

The other key distinguisher between now and late 2018 is that COVID-19 is very likely to cause a global recession. As per the Oxford English Dictionary, a recession is “generally identified by a fall in GDP in two successive quarters”.  With such a drastic reduction in commercial activity and disruption to supply chains, it isn’t difficult to envisage two bad quarters for most economies in the world. I’d be surprised if we’re not already in a recession. But remember that just as one data point doesn’t make a trend, one year doesn’t make the value of a company.

Assuming we must endure a recession for the next year, does that in itself justify 30% of a company’s market value being wiped out?  Perhaps, if the stock in question is overvalued, but again remember the bull run that just ended is widely perceived as the performance of the S&P 500 Index average, which was skewed by a handful of names.

Even near market peaks, for a variety of reasons there are always out of favor stocks that are undervalued. The recent sell-off has left numerous companies, some of which are high quality (e.g. earn high returns on tangible capital) trading at low- to mid-single digit price to cash flow multiples, or conversely 20% to 40% free cash flow yields. The cheap became much cheaper within several trading sessions. Earnings growth in these companies will be moderate over the longer term, with 2020 being an exception due to the business disruption caused by COVID-19.  Most of these opportunities are in the sub $1 billion dollar market cap category, though some reside in the $7 billion to $10 billion category.

Is The World Overreacting To COVID-19?

In my opinion, the markets have grossly overreacted to COVID-19. My view is that this is a horrible virus that will take many more lives before its spread tapers off in similar fashion to China’s and South Korea’s experience. While I agree with the drastic measures taken by various governments such as quarantining entire cities, cancelling school, and prohibiting large gatherings, the panic in the general populace is disproportionate with the severity of the problem.

Besides lives, what has also been lost, sadly, is any balance about how to think about this virus. The media in particular has been effective in fostering panic - not by spreading false information, but rather by pushing negative headlines in front of our eyes. It seems technology has rendered us more vulnerable than ever to herd mentality. Thanks to the popularization of the smartphone, our impulses are increasingly more exposed to sound bites designed to generate a reaction, with the intent to earn advertising dollars. Perhaps SARS in 2003 would have been a completely different experience if we all had a smartphone.

As a disclaimer, the loss of any life is a grave matter and children’s lives are not more or less valuable than those of the elderly. However, one should keep in mind that of the ~6,500 coronavirus deaths recorded, none thus far have involved children under the age of ten. In South Korea, which was the leading country of infected people behind China until recently, no deaths have been recorded under the age of 30. The data collected thus far shows that the case fatality rate of COVID-19 is much higher than the seasonal flu. The elderly and infirm are most vulnerable.

According to The Report of the WHO-China Joint Mission, the case fatality rate is only 0.2% (two out of every thousand cases) in the 10 to 40 year old age bracket. Moreover, the same study found that only 0.9% of deaths were linked to individuals with no pre-existing health condition.

My opinion is that markets will rebound strongly when new cases of the virus begin to decelerate in the U.S., though I am aware that wide scale testing in the U.S. is only starting to ramp up.

Inevitably, confirmed cases will spike over the next few weeks and the related headlines will be a source of sticker shock. Let’s admit that the U.S. is the center of gravity for global equity markets. It wasn’t until the virus ‘hit home’ on American soil that stock markets around the world really started to dive. As for the argument that we are entering a long bear market due to the perfect set-up of frothy valuations, leveraged balance sheets, and ultra low interest rates (that must eventually begin an ascend), I don’t have an opinion.

I do believe it could mean lower returns for everybody, but all the same it won’t change most money managers’ goal of finding those special gems: great businesses that are well priced. Be mindful of the tendency of looking at historical index performance as the key reference point of how everything will perform going forward. Again,the 2009-2020 bull market was skewed by a handful of high growth tech companies; the index’s valuation certainly did not speak for a large cross section of the market.

If I had a lot of cash, I would definitely invest a portion of it today based on the bottom-up value opportunities created over the past three weeks of panic selling. I say that knowing full well that we may not have reached the bottom. We may have another 10% to 30% to go on the downside. I just don’t concern myself with factors I consider unknowable and refuse to trade or hoard cash based on said factors.

What is 100% knowable is the current share price of any publicly traded company, and with less precision its future free cash flow generation and the business’s likelihood of reinvesting or compounding those earnings at a decent rate. Those are the key inputs into forming a view of one’s return expectations over the longer haul. Yes, a lot can go wrong with any investment, especially assumptions relating to the future. But if given the choice to estimate the length of a room via pure guesstimation or an imperfect measuring tape (say +/- 10% margin of error), which option should be chosen?

In turbulent times, it bears reminding what it means to own shares in any company.  Without lifting a finger - except to make the purchase - we are entitled (proportionate to our shareholding) to all of the free cash flow of the company. In cash terms, this benefit of ownership will manifest itself in dividends, realizing a higher price based on the company being acquired, or being able to sell higher due to the market’s recognition of growth in the company’s earnings power.

To me, equity ownership is a magical concept. Whether it be the ownership of an operating business or passive ownership represented by a few shares of a great enterprise, we have the prospect of gaining from long term compounding.  But of course it’s never just that easy. Between the time one buys and sells, a certain tolerance is required to endure the mad fluctuations of Mr. Market and occasional setbacks of the underlying company.

Do these swings render stocks to be risky investments? I would say the answer is yes if the funds are needed to be spent in the near term, and no if one has the means to ride out the inevitable hurricanes that hit in any ten year period. This is one of those times that will make or break the financial futures of many.

Yours in social isolation,