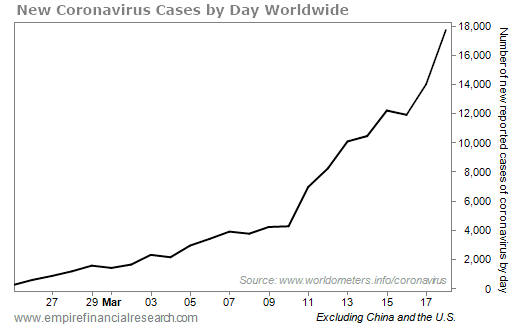 1) People are freaking out because the number of new Covid-19 cases in the U.S. and the rest of the world (excluding China) spiked upward yesterday – continuing an exponential trend, as these charts show: 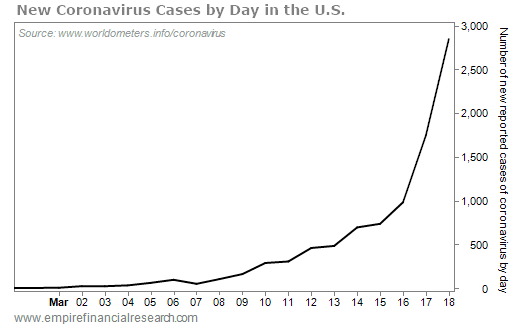 But people are having the exact wrong reaction, as statistician Nate Silver of FiveThirtyEight points out in this tweet...

In other words, as I've discussed before, the rising number of reported new Covid-19 cases in countries that are just ramping up their testing is good news, because it means that widespread testing is finally getting underway.

Unfortunately, we don't know the two numbers we really care about: total infections and new infections each day. But one thing we do know is that the current numbers in the U.S. – 9,464 total cases and 2,848 new cases in the past day – are completely wrong. The actual number of infected Americans could be 10, 100, or 1,000 times higher. The number of new cases is counting a lot of folks who've been infected for quite a while – but only got tested yesterday – so this number could, in reality, be much lower (it could also be much higher if the virus is spreading exponentially, but our limited testing hasn't revealed it).

In summary, because of our lack of testing and overall dismal, belated response to date, we're flying blind... which is the main reason people are panicking.

The Devastating Economic Consequences Of A Lockdown

2) Investors are rightly concerned about the devastating economic consequences if the U.S. orders a complete lockdown (they're bad enough already, as this New York Times article highlights: The Staggering Rise in Jobless Claims This Week), as China did in Hubei province and Italy has done nationwide. This is what hedge fund manager Bill Ackman called for when he appeared on CNBC yesterday (you can read about it and watch it here: Investor Bill Ackman advises Trump to shut down the country, saying stock market 'will soar').

I'm not yet convinced that this is necessary right now. China and Italy completely botched their initial responses, and thus had to take extreme measures. But I don't think it's too late for us to follow in the footsteps of South Korea, Japan, Taiwan, Hong Kong, and Singapore – all have effectively stopped the coronavirus in its tracks without shutting down completely and quarantining all of their citizens.

As this insightful Washington Post article shows, the key to sensibly and effectively fighting the coronavirus is to identify who has it and then take targeted steps to quarantine and treat those people: How the U.S. can defeat coronavirus: Heed Asia's lessons from past epidemics. Excerpt:

Political will, dedicated resources, sophisticated tracking and a responsible population have kept coronavirus infections and deaths in Taiwan, Hong Kong and Singapore relatively low. South Korea, with more deaths, has led the way in widespread testing. Now, after seeing unprecedented increases of imported cases, Taiwan, Hong Kong and Singapore have all moved to implement travel bans, essentially closing their borders to nonresidents or mandating 14-day quarantines, to prevent a new uptick of Covid-19 cases.

What South Korea Did

3) Let's take a closer look at what South Korea, a country of 51 million people (only slightly smaller than Italy's 60 million), did (and didn't do). I suggest reading this article in Science Magazine: Coronavirus cases have dropped sharply in South Korea. What's the secret to its success? Excerpt:

Amid these dire trends, South Korea has emerged as a sign of hope and a model to emulate. The country of 50 million appears to have greatly slowed its epidemic; it reported only 74 new cases today, down from 909 at its peak on 29 February. And it has done so without locking down entire cities or taking some of the other authoritarian measures that helped China bring its epidemic under control. "South Korea is a democratic republic, we feel a lockdown is not a reasonable choice," says Kim Woo-Joo, an infectious disease specialist at Korea University. South Korea's success may hold lessons for other countries – and also a warning: Even after driving case numbers down, the country is braced for a resurgence.

This is another good article by the American Institute for Economic Research: South Korea Preserved the Open Society and Now Infection Rates are Falling. Excerpt:

What's the better for dealing with pandemic disease: martial-law quarantines imposed by the state according to geography, or keeping society open while trusting medical professionals, individuals, families, and communities to make intelligent decisions?...

4) Yesterday afternoon, I did a six-minute interview with Jen Rogers on Yahoo Finance TV, which you can listen to here. I explained why it's the best time to be an investor since 2008 and 2009, and shared my thoughts on what Ackman said earlier in the day. I agreed with him that we need to take strong measures to rein in the spread of the coronavirus, but said it wasn't clear to me if every person in the U.S. needed to be confined to their homes for the next 30 days.

(If you want to follow my latest thinking on the coronavirus crisis every day, simply send a blank e-mail to: [email protected])

5) A friend sent me this optimistic analysis:

Take this as one man's opinion in a roaring cacophony, but I was playing with some data on this and had a couple thoughts emerge which I thought I would share.

The most interesting data I am looking at is the time from start to "flat" on the incidence curve, which I define as a flattening of the logarithmic growth rate (all data from https://www.worldometers.info/coronavirus/), and the number of absolute deaths per capita in countries that have reached flat on the incidence curve. The logic below is all based on data from the four countries that [are] ahead of us on this issue: China, South Korea, Italy and Iran. This view will firm up as we get more of that data, and is more oriented towards an [investor's] mindset (which I am).

Based on this data, I *currently* disagree with the biggest bears on COVID-19 who worry about 1+ million deaths, and even disagree with embedded consensus on where this is going in the U.S. (which I peg at 300k-500k deaths).

My base case is 10,000 deaths in the U.S. – yes, that is bad, but minor in the context of historical pandemics (and yes, minor in context of a typical [seasonal] flu. There. I said it.). Let's agree on something self-evident: almost the only stat that ultimately will matter is the number of deaths in each country, which is obviously tied to the time it takes to flatten the curve. Hence #flattenthecurve. Of course we should flatten the curve. I simply ask, at what cost?

We know that in China and South Korea, the curve flattened quickly (22 days and 14 days, respectively, from start to flat), with almost infinitesimal percentages of the population dead (0.0002% in China, 0.0002% in South Korea).

The most fascinating data to me, however, comes from Italy and Iran, which bungled the response and did not widely test or lock-down (i.e. closer to the U.S.). As a result, many more people died, which is awful (0.0041% of the population in Italy and 0.0012% in Iran, 25x and 5x the death rate per capita as China and South Korea).

However, after 26 days in Italy and 25 days in Iran, it appears that the curve may be flattening (though still not declining, as in China or South Korea). The number of new Covid-19 cases in Italy was flat for four days before rising 19% yesterday, and in Iran, [it has] bounced around, but is lower today than it was 12 days ago.

This is the data to watch: Iran & Italy. If the number of new cases starts to decline, it's a super bullish comp for the U.S.

We are already 17 days into our crisis, with exponential growth going strong. My working hypothesis is that our curve will flatten slightly in 1-2 weeks in the U.S. (well ahead of the July/August [timeline] that Trump communicated) and surprise the world to the upside. At this point, this might be more hopeful than anything, but I think I see this thesis in the data. I'll check it daily. 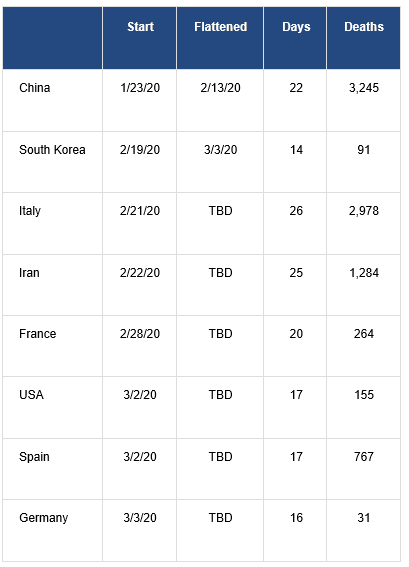 I also think that there has been way too much attention to cases and not enough to deaths – that's what matters here.

Yet many fear that in the U.S., the virus will rip through city after city, killing tens or even hundreds of thousands of people in each major metro. We won't be able to restart our economy for 6-9 months or more, as you cannot restart an economy into a deadly pandemic once [you've] stopped it. We then sink into a recession driven by sinking confidence that feeds upon itself given the leverage in the system, and likely leads to rolling bankruptcies of large swaths of U.S. corporations, with the S&P 500 falling well below 2,000.

This is a scary reality, and I've got a long list of stocks (most with lots of leverage) down 50%-70% in a month that seem to be embedding this base case. This is possible, but right now seems like a 5%-10% case to me.

I think what is built into stock prices right now is 300k-500k deaths in the U.S., with bear case fears of 1 million to 2 million deaths. This just doesn't make sense to me, given 1,284 deaths so far in Iran and 2,978 in Italy (with curves maybe flattening), and 3,245 in China and only 91 in South Korea (with curves flat). These numbers of 1+ million seem based on conjecture and fear, not comparable data analysis.

Based on these four prior country case studies (which are still fluid, to be clear), my base case for deaths in the U.S. is under 10,000. This is obviously subject to revision and very [data-dependent] on the daily death rate both here and in the four countries that are ahead of us on the curve.

For society's sake, I sure hope I'm right.

People also forget that the U.S. has, by far, the best healthcare system in the world. If you disagree, ask any oligarch you know where he flies to get a heart surgery. We have the best hospitals, the best doctors and nurses, and the best equipment. It's not even close – why do you think it's so damned expensive? Don't believe the hype – if you get this disease anywhere in the world, the U.S. is the best place to get it, and that should meaningfully help our per capita death rates.

I get the social movement to stay inside and protect the elderly from exposure. That certainly will help flatten the curve, but we have no idea how much, and I just ask whether the side effects are worth the cure.

Lastly, what if I'm right with this controversial and contrarian view? What if the curve flattens in two weeks and we declare victory by mid-April?

We have 0% short-term rates, likely $1.2 trillion in stimulus running through the system (a massive 6% of GDP), and immense pent up demand into the second half of the year.

If this plays out the way I think it might, the S&P 500 could hit a new all-time high by the end of the year.

A key risk is obviously inflation, but $23 glut-driven oil and a strong dollar is a deflationary offset.

It should be a wild ride...

6) If you didn't have a chance to fill out the brief two-question survey I included in yesterday's e-mail about how bad you think the coronavirus crisis will get in the U.S. (as measured by total Covid-19 cases), I'd be grateful if you'd take 30 seconds to fill it out – you can do so here. Thank you! I'll share the responses later this week. 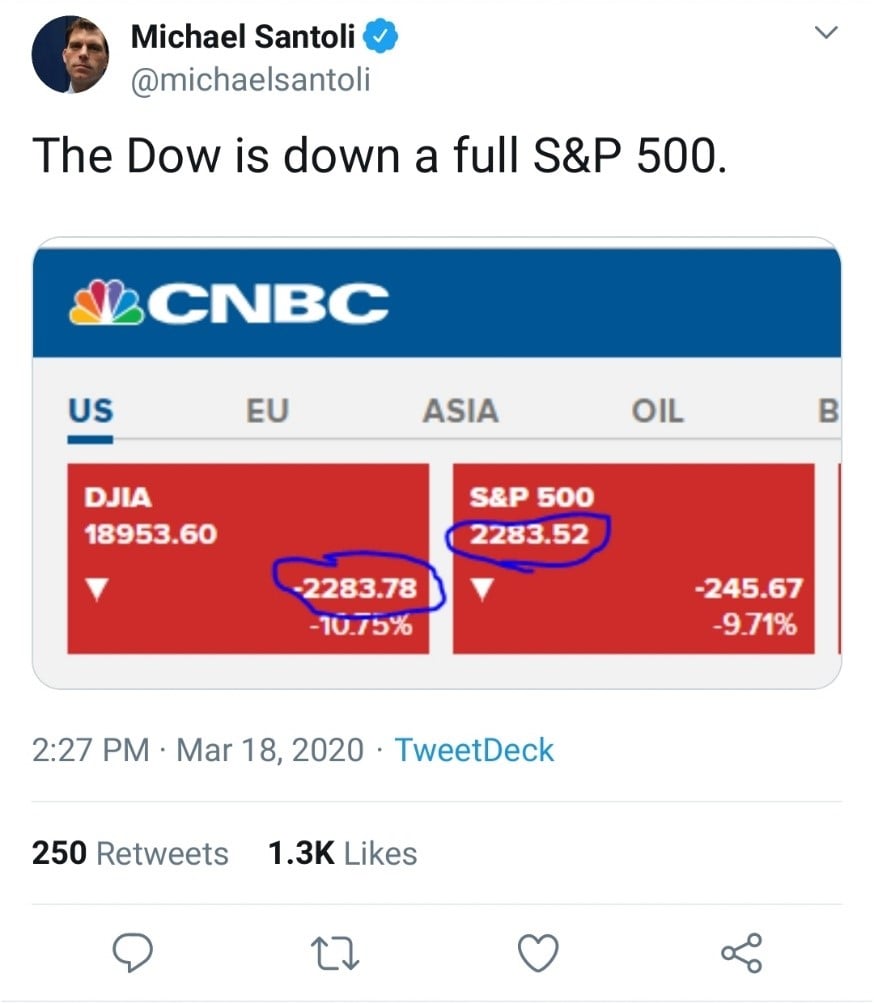