ValueWalk
Home Business Coronavirus is spurring the next recession now 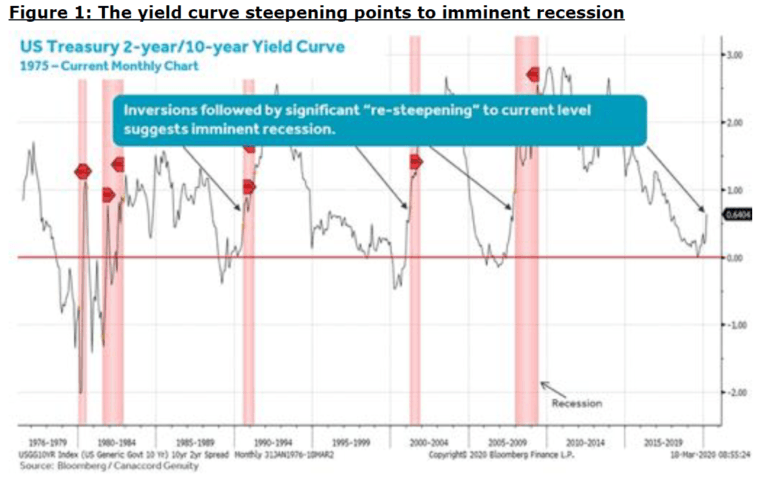 There was talk of a recession before the novel coronavirus started to spread, but those fears have picked up dramatically. The yield curve has now steepened, signaling that a recession is imminent as the coronavirus continues to play out worldwide.

In a note on Wednesday, Canaccord Genuity analysts Tony Dwyer and Michael Welch said the steepening of the yield curve not only signals a recession but indicates that one is imminent. Over the last month alone, the U.S. economy has downshifted from reaccelerating to almost a complete shutdown due to measures to deal with the coronavirus, which they expect to trigger a recession.

They noted that the two-year and 10-year Treasury yield curve steepened to 64 basis points after inverting on Aug. 26. In the last seven cycles, recession has also ways come after curve inversions. However, they believe the length of time between the inversion and the next recession has been pulled forward by the social distancing mandates due to the coronavirus. 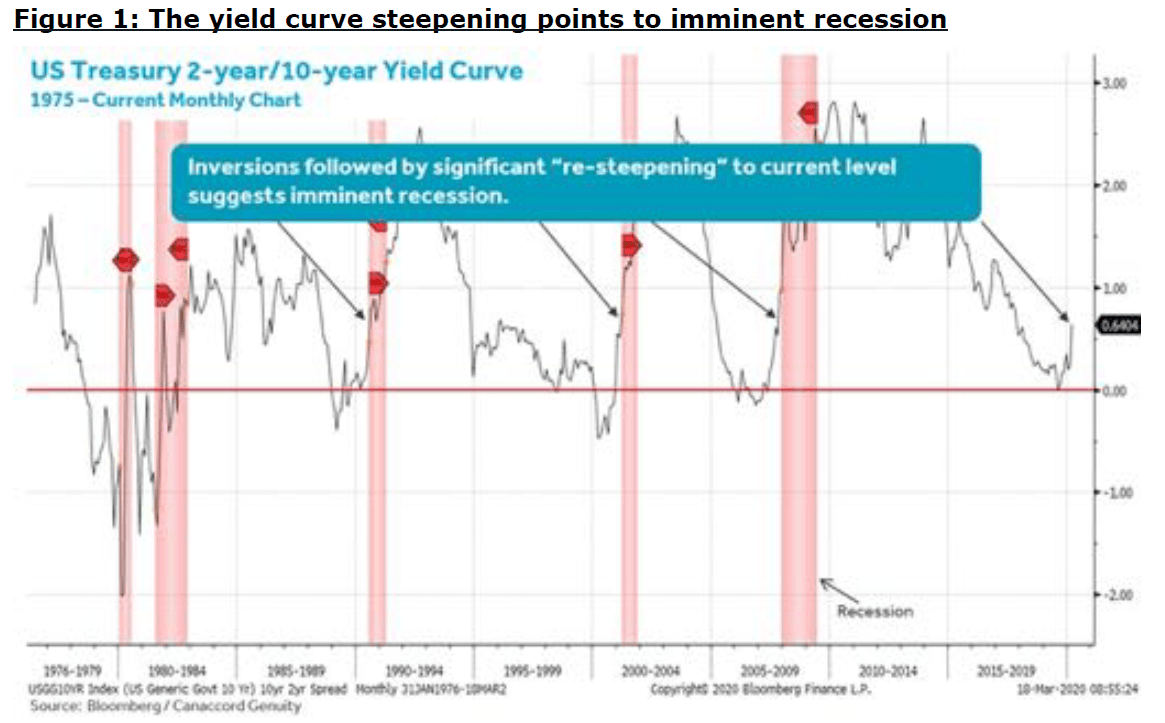 Recession has already begun amid the coronavirus

In their recent commentary, management from Crescat Capital said the recession has already started.

"Stocks are acting like it's the Great Depression again and we believe a recession has already begun," they wrote.

The said the probability for a U.S. recession jumped above 50% on one Bloomberg indicator, reaching the highest level since the global financial crisis. They added that the indicator leads unemployment changes by five months with a correlation of 0.81. Further, they said it suggests the labor market has peaked.

Crescat Capital management believes corporate earnings will plunge, and unemployment will surge, noting that such situations would be "perfectly normal" because of the business cycle.

"It must play out at always to purge the economy and markets of their sins and prepare the way for the next growth phase," they wrote. "From the February top for large cap stocks, it would take a 56% selloff just to get to long term mean valuations, a 74% decline to get to one standard deviation below that."

Here's what the Fed is doing

The Federal Reserve has been resorting to historic measures to keep money moving as the economy lurches to a virtual standstill. The Fed announced that it will start up the Primary Dealer Credit Facility again, which was originally set up in 2008. The facility enables primary dealers to support the functioning of the market and make credit available to individuals and businesses.

The Fed also launched the Commercial Paper Funding Facility, which was also last use during the global financial crisis. The facility enables the central bank to buy unsecured and asset-backed commercial paper from eligible companies.

Jefferies strategist Sean Darby and team said the market seems to be feeling as if the current investment environment is a "hybrid between the tragic 9/11 terrorist attacks, the 2015 China slowdown and the 2008 banking crisis."

The 9/11 attacks were attack to the U.S. service economy, while the 2015 China scare saw a deep plunge in oil prices. They describe the 2008 banking crisis as "a slow-burning deterioration in housing credit undermining the banking sector."

They said the two big differences this time around is that the coronavirus' impact came with a sudden drop in credit conditions while oil prices plummeted. Additionally, the service part of the global economy has been growing, becoming a major employer in the tourist industry.

Past incidents of widening credit spreads and elevated VIX

The Jefferies team looked at past situations in which global credits spreads widened and the VIX rose sharply, which occurred with the dotcom crash in 2001 and during the global financial crisis in 2007 and 2008. They noted that these situations brought sharp declines in forward and trailing estimates. However, the GDP changes and stock market correction were different.

"The simple rule of thumb is the longer the blow-out in credit spreads, the deeper the cut in forward earnings growth and subsequently much deeper weakness in trailing earnings growth," they wrote. "2008 and 2015 produced very different credit stresses and changes in earnings estimates and PE multiples."

Early this month, they had expected global earnings to be cut by about two-thirds, and now they're looking for a 15% to 20% contraction. Jefferies' economics team expects the second quarter to be difficult and the third quarter to bring a gradual reversal of current conditions.

How the coronavirus differs from the recession in the financial crisis

Nomura analyst Richard Koo pointed out an important difference between the coronavirus situation and the recession that occurred with the global financial crisis. He pointed out that the financial crisis was triggered by the collapse of Lehman Brothers in September 2008. It occurred when the market for collateralized debt obligations left banks holding them without enough capital, making it impossible for them to keep operating.

"In other words, it originated in the real economy," he emphasized.

U.S. officials responded to the global financial crisis by shoring up the financial sector with TARP recapitalizations, keeping it from breaking down entirely. They also rolled out fiscal stimulus to bolster GDP by borrowing and spending the surplus private-sector savings as businesses and households grew their savings to repair their broken balance sheets.

However, today GDP has already fallen sharply, and that decline was triggered by a sharp decline in corporate and household incomes. Koo believes that GDP is "probably down by several tens of percent almost everywhere, and addressing the resulting problems will require measures of commensurate scale." He believes unsecured, no-interest loans and credit guarantees will be needed this time to support the economy.