In my last post (“Too Late To Hedge“), I wrote that it was too late to hedge market risk, but not too late to go on offense:

Go on offense. If you have cash to put to work, you can buy and hedge Portfolio Armor's top names, or open one of the hedged portfolios constructed of them. Portfolio Armor is selecting securities with the aim of generating positive returns, not just losing less than the market, as you can see below.

Here's an example of that. One of Portfolio Armor's top ten names on Thursday was the ProShares UltraShort Oil & Gas ETF (DUG). The system picked it based on the same quantitative analysis of past returns and forward-looking options sentiment it applies to every stock and ETF, but if you want a story behind that pick, it's pretty simple:

The challenge here is that DUG is highly levered and can blow you up if you end up being wrong. A solution to that is to buy DUG and hedge it with an optimal, or least-expensive collar.

A Hedged Bet On DUG

You'll want to scan for a current version of optimal collar, as prices can move quickly with DUG, but as of Thursday's close, this was the optimal collar to hedge 500 shares of DUG against a >30% drop by mid-October while not capping your upside by less than 30% (your actual upside is higher than that, as you'll see below). 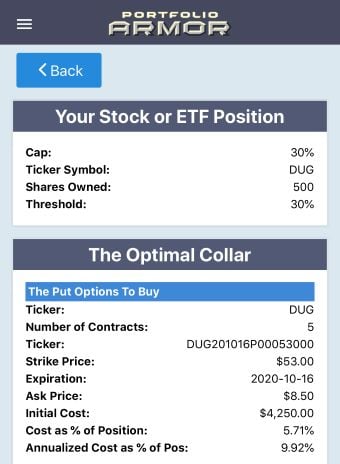 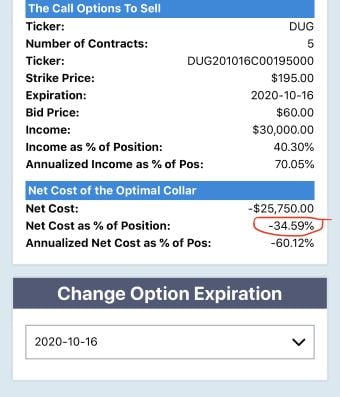 To be conservative, the app calculated the cost assuming you bought the puts at the ask and sold the calls at the bid (in practice, of course, you can often buy and sell options at some price between the bid and ask). Nevertheless, the net cost of the collar was negative, meaning you'd collect a net credit of $25,750, or 34.59% of position value, when opening this hedge, assuming you placed both trades at the worst ends of their respective spreads.

The worst case scenario for this trade is a decline of 30%. The best case

scenario is a 30% gain on the ETF, plus the 34.59% net credit = 64.59%. So your maximum upside here is more than 2x your maximum decline. If you think we're going to have a v-shaped economic recovery before October, you take the same approach except scan for the optimal collar using the July or even April options expiration.