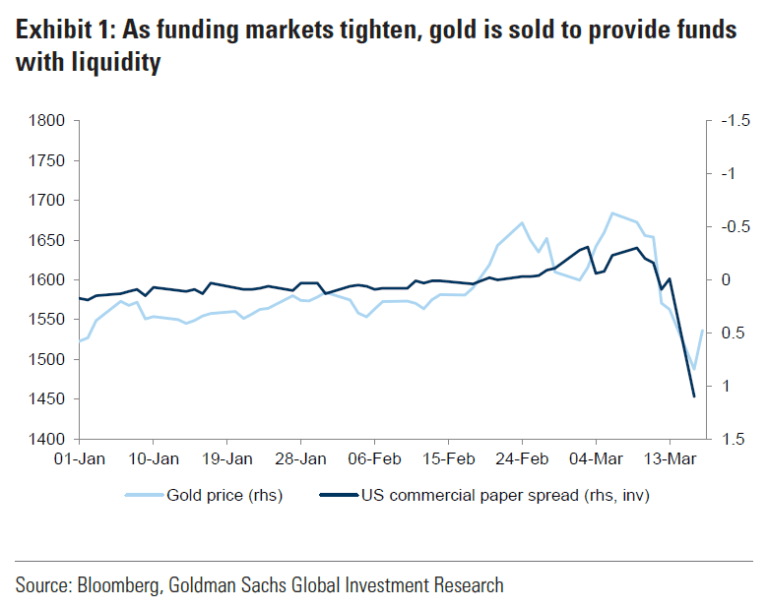 The gold price has been on a bit of a roller coaster recently, although Goldman Sachs argues that it is the currency of last resort. The yellow metal serves as a store of value when other asset prices are plunging, so why has it been tumbling along with other assets? Goldman analysts explained in a report this week.

Gold and one currency: the dollar

Analyst Jeffrey Currie and team said gold is a hedge against currency debasement when central banks work to support shocks to the market and economy like the current coronavirus pandemic. However, the gold price has been falling at a time when the world's central banks have been rolling out stimulus and debasing their currencies.

The Goldman team explained that the gold price has been falling because the world is short U.S. dollars. They said participants in both the physical and financial market are up against severe funding constraints. They had had to sell their liquid positions, which includes gold and other commodities. These sales are generating dollars for their other funding needs. 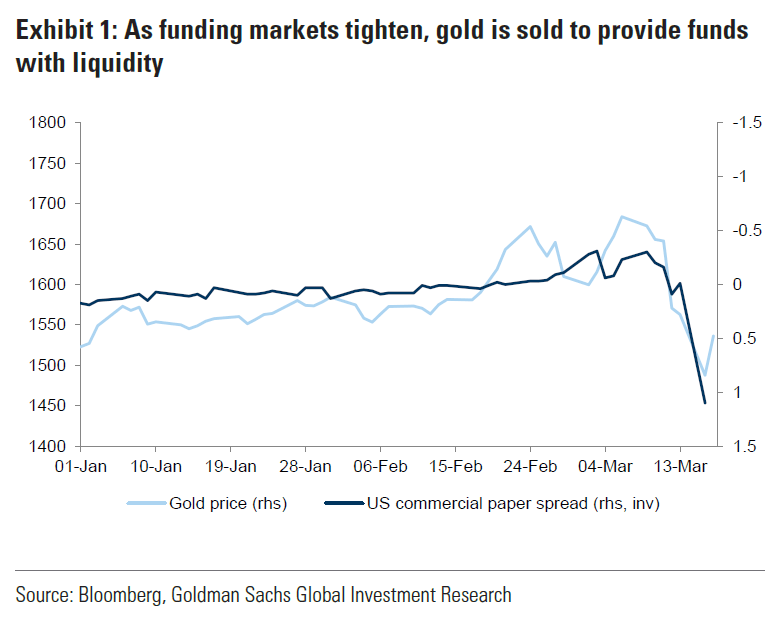 The other problem for the gold price is that oil prices have plunged, creating shortages of the dollar in emerging markets. They said this has become especially clear with the Russian central bank in the last few weeks. The plunge in oil prices may have turned Russia from a net buyer of gold into a net seller.

Gold price plunges due to liquidity

They also said liquidity issues have also been having a significant impact on the gold price, which corrected by $120 from its peak. They drew a comparison between the current situation and 2008, when the yellow metal also initially did not act like a safe-haven asset. The gold price plummeted by about 20% due to the strength of the U.S. dollar and a dash into cash.

The Goldman team said the turning point in 2008 was the Fed's announcement of $600 billion in quantitative easing in November. At that point, the gold price started to climb even though equities and commodities remained weak. 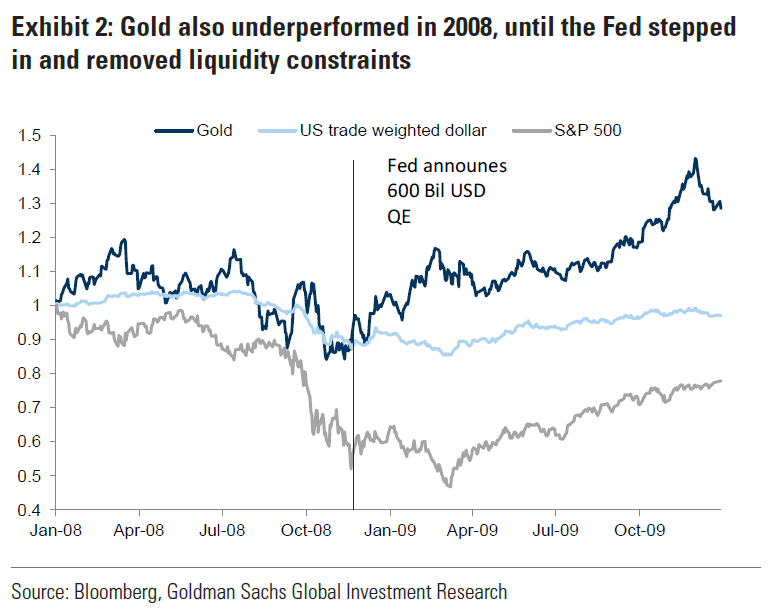 They note that a pattern similar to 2008 is starting to emerge. The gold price stabilized and then rallied earlier this week after the Fed announced more liquidity injections. The yellow metal is back to falling again today, but at least for now, it looks like $1,600 an ounce is serving as a key support level for the gold price.

They looked at gold in their "Fear and Wealth" framework, in which the fear of currency debasement drives investment demand in developed market. Wealth drives emerging-market purchases. The Goldman team pointed out that frequently, fear is correlated with long-term real rates in the U.S. 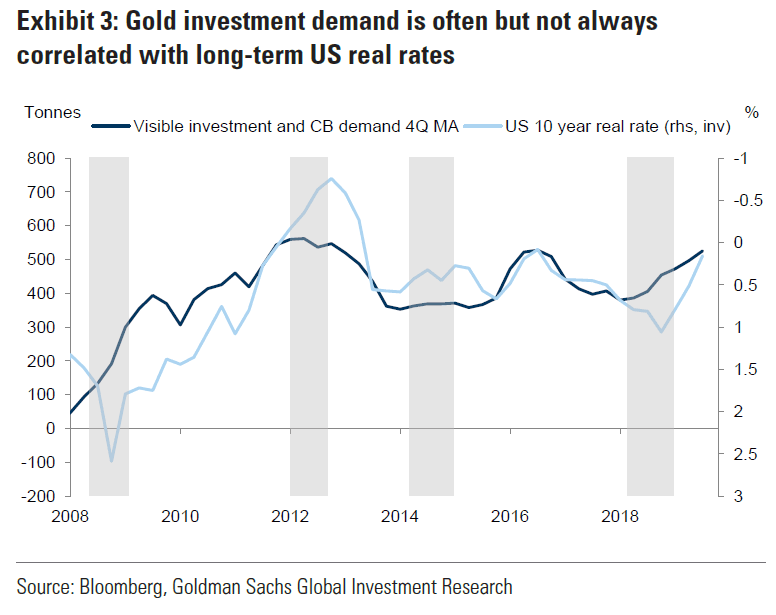 As funding stresses start to ease, they expect the focus to shift to the massive size of the expansion to the Fed's balance sheet. The focus will also be on the increase in fiscal deficits in developed-market economies. Another issue will be the sustainability of the European monetary union. They expect these issues will result in currency debasements similar to what happened following the global financial crisis.

They also believe the market has reached an inflection point in which fear-driven purchases will surge, dominating selling pressure driven by liquidity needs. The same thing happened in November 2008. Thus, the Goldman Sachs team believes their outlook for the gold price in both the near term and long term is looking more constructive. They expect the gold price to climb to $1,800 an ounce in the next 12 months.

Headwinds for the gold price

They do expect headwinds for gold for now, especially as oil prices and emerging markets remain pressured. China and other Asian countries are starting to show signs of recovery.

They slashed their six-month price target for gold by $50 to $1,700 an ounce due to impacts from emerging-market investments. However, they believe that headwind is already priced into the yellow metal.

Looking again at the situation in 2008, the Goldman team believes the increase in fear-driven investment demand will overtake the negative shock to wealth in the near term. 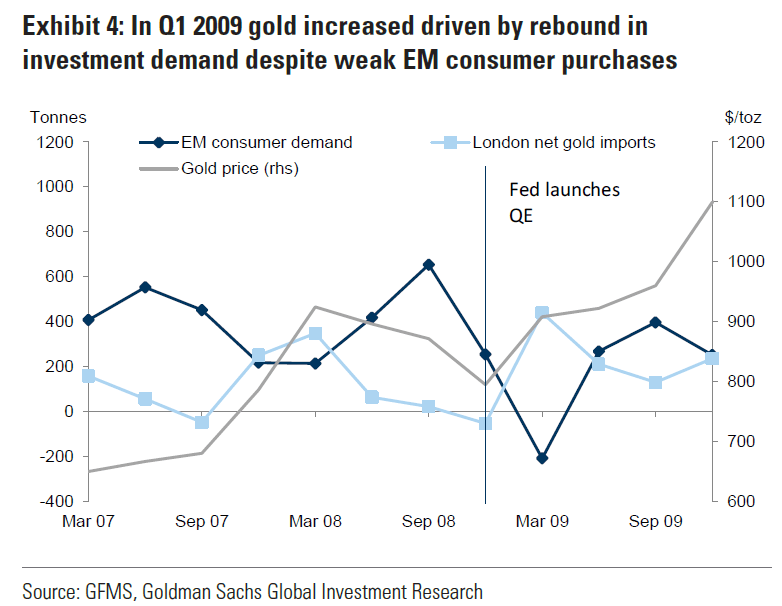 They noted that demand for gold can be deferred rather than lost permanently like demand for energy. Thus, they expect gold demand to rebound in Asian emerging markets as their economies stabilize and consumers make up for missed purchases. They say this will be especially true for speculative purchases, just as investors have done historically when chasing market trends. 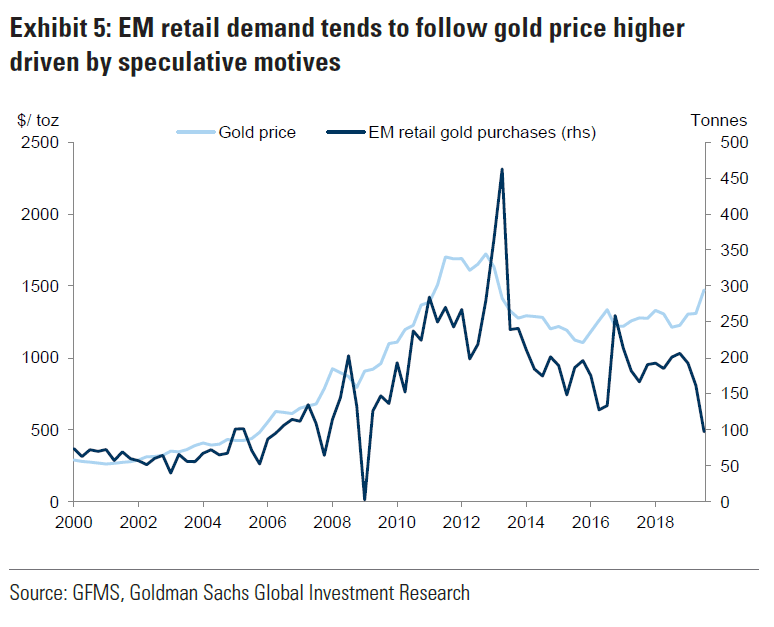 Going long gold, although currency shortages not over

The Goldman team added that the wealth outlook for emerging markets that are rich in commodities is not as optimistic right now. However, their gold demand isn't as high as the expected demand from Asian emerging markets. 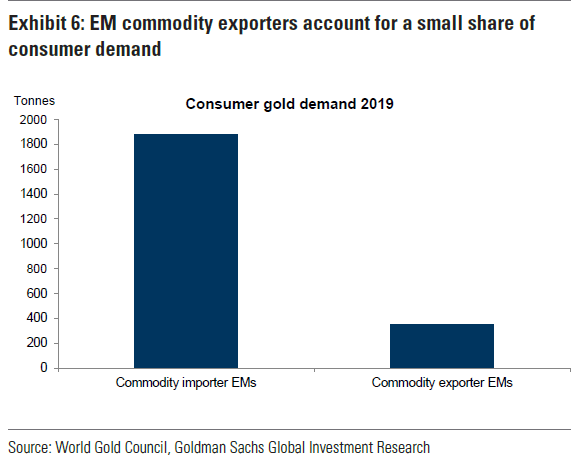 Thus, while they are comfortable with being long gold, they don't necessarily believe that the shortages in the dollar are over. They also don't want to be long on other commodities.

They believe that because of the size of the world's oil market, the steep decline in oil prices only accentuates the shortages in the dollar. The analysts point out that oil and commodity prices are closely correlated with increases and decreases in savings in emerging markets. 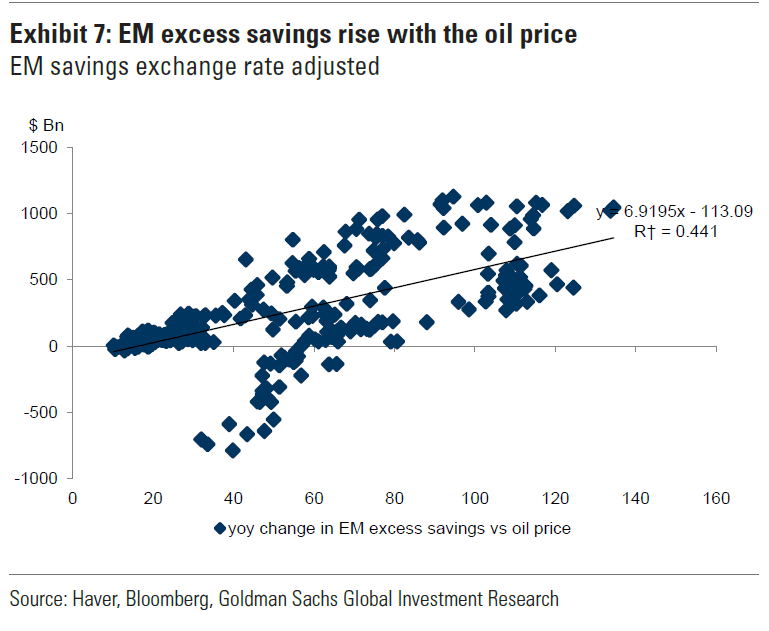 In most cases, the financial markets turn those savings into increased global liquidity, which supports valuations of assets and improves the world's credit conditions. Thus, when commodity prices fall, weighing down emerging market savings, they also weigh on financial conditions and serve as a headwind for the gold price. In turn, the U.S. dollar becomes scarcer. Thus, the negative correlation between oil and the dollar is back. 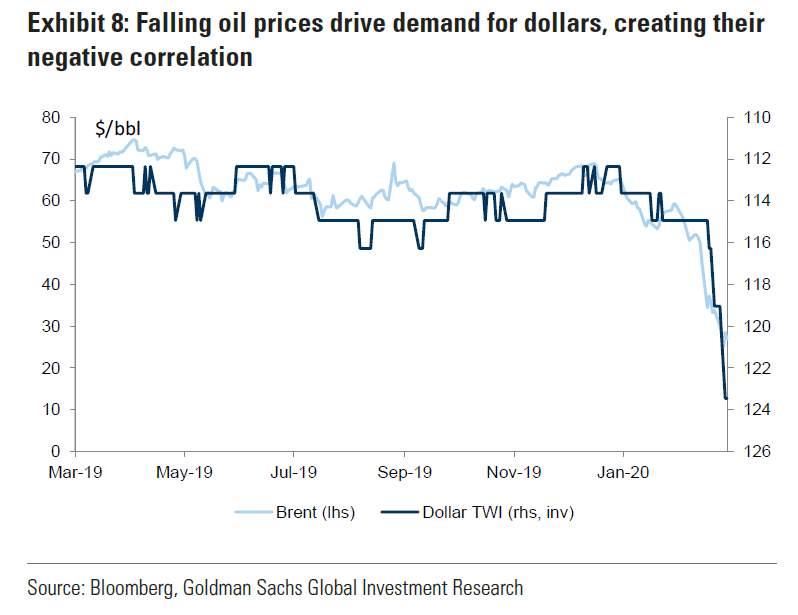 When the GDPs of emerging markets stabilize, Goldman Sachs analysts expect consumers in those markets to extend the fear-driven bull market for gold.

Returning to their 2008 comparison again, they add that wealth in emerging markets is still pressured. However, as the coronavirus pandemic eases, they predict sequential gains in Asian emerging market growth. They believe these markets will lead developed markets out of the crisis, just as they did in 2008 and 2009.

"This China-driven growth will likely give rise to inflationary concerns given the sharp expected contraction in oil and other commodity supply like agriculture and livestock," they wrote.

When this is combined with policymakers' fiscal response to the coronavirus pandemic, they expect inflationary concerns with the dollar close to a record high will dominate inflation in asset prices. The same thing happened in the last decade.

"Such inflationary concerns should further support gold prices as the currency of last resort," they explained.