Gaithersburg, Md. (March 27, 2020) – U.S. gas station operators are bracing for the impact of COVID-19 on fuel sales, as same-store gasoline sales were down 2.4% nationwide for the week ending March 14, when compared to the same week last year, according to OPIS Demand Report, a weekly survey of more than 15,000 fuel stations nationwide*.

More troubling for the long-term, says retail experts from Oil Price Information Service (OPIS) by IHS Markit (NYSE: INFO), is the data is finally starting to hint at the potential demand destruction to come. Data collected so far on sales in the week ending March 21, shows demand destruction increasing 10-fold or more across retail chains.

“At a time when rapidly decreasing oil prices would theoretically lead to an increase of consumer demand for gasoline, much of the country is shutting down economic activity due to the COVID-19 outbreak,” said Tom Kloza, global head of energy analysis at OPIS. “We are likely to see weekly gasoline demand numbers drop to levels last witnessed in the Nixon Administration, and we’ll see those lower levels in April.”

The epicenter of the COVID-19 outbreak in the United States began initially on the West Coast, particularly in Washington state and parts of California, and according to the OPIS Demand Report, gasoline demand data seen in the West and Northeast regions early in the outbreak may be the proverbial “canary in the coal mine,” as an indicator for what is to come for the rest of U.S. as the virus spreads.

The Northeast region, where New York and other metropolitan areas have seen a large increase in positive tests for COVID-19, saw year-on-year fuel demand decline 3.7%. Again, conversations with retailers in some of these impacted states are suggesting year-on-year volume losses of 20% to 40%, which will be chronicled in the next OPIS Demand Report.

With many states implementing social distancing regulations, and some even moving to shelter-in-place policies, Kloza expects even more significant declines in U.S. gasoline demand in the coming weeks.

“We are likely to see weekly gasoline demand numbers slide below 6 million barrels per day – volumes last witnessed during the Nixon Administration, and we’ll likely see those lower levels in April,” Kloza said. 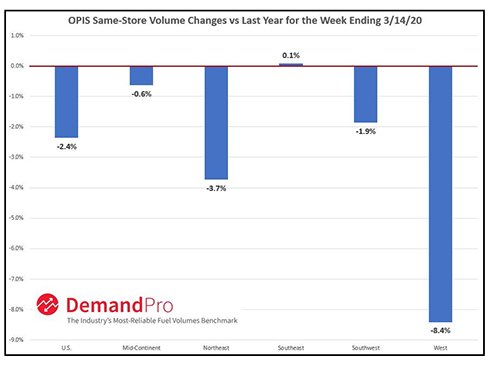