The Dow Jones Industrial Average officially entered a bear market on Wednesday as fears about the coronavirus continue to spread. The S&P 500 plunged but stopped just short of a bear market on Wednesday, or a 20% decline from recent highs. However, some analysts are expecting the stock rout to end soon. In fact, one firm said the “pronounced weakness” has set the stage for a “multi-week rally” in the stock market.

The rout in the stock market continues today, with the Dow Jones off another 1,700 points, putting it on pace for its biggest one-week point loss ever. The S&P 500 officially fell into bear market territory today with another 6% decline or 160 points. As of earlier this morning, FactSet said that not a single stock in the index was in the green. Additionally, 324 stocks in the index are down to their lowest level in a year or more.

According to CNBC, for every one stock on the New York Stock Exchange that's advancing, there are 73 declining. Trading was halted around 9:38 Eastern as stocks fell so much that they tripped a circuit breaker again.

Earlier this morning, the VIX jumped to 65.6. The only other time the fear gauge was that high was during the height of the financial crisis over 10 years ago.

Call for a multi-week rally

In a note this week, Canaccord Genuity analysts Tony Dwyer and Michael Welch pointed out that the financial markets have seen an "extreme" risk-off shift due to the fears about the coronavirus and Saudi Arabia's recent oil decision. They noted that the S&P 500 saw its fastest 10% correction from record levels ever. Other risk measures also saw strong movements, including bonds, volatility and corporate debt.

They pointed out that yields on the 10-year Treasury have seen their sharpest decline since the Great Financial Crisis, based on a 10-week rate-of-change. 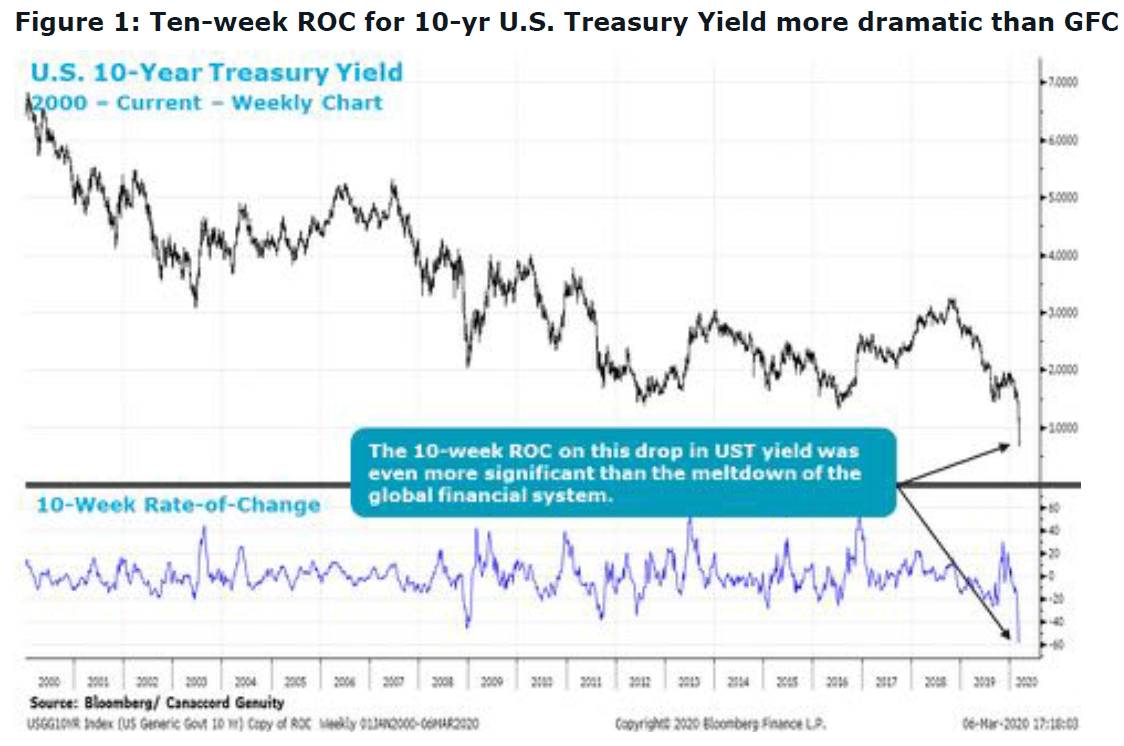 The Canaccord Genuity team added that there was a sharp spike in rates after that extreme was seen in 2008. They expect a similar movement amid the roll-out of global monetary and fiscal stimulus.

They also said the only other time the 10-week rate-of-change on the VIX was higher was during the Global Financial Crisis. They added that the peak in volatility wasn't the low in the S&P 500, but it did suggest that "most of the pain had already been felt." 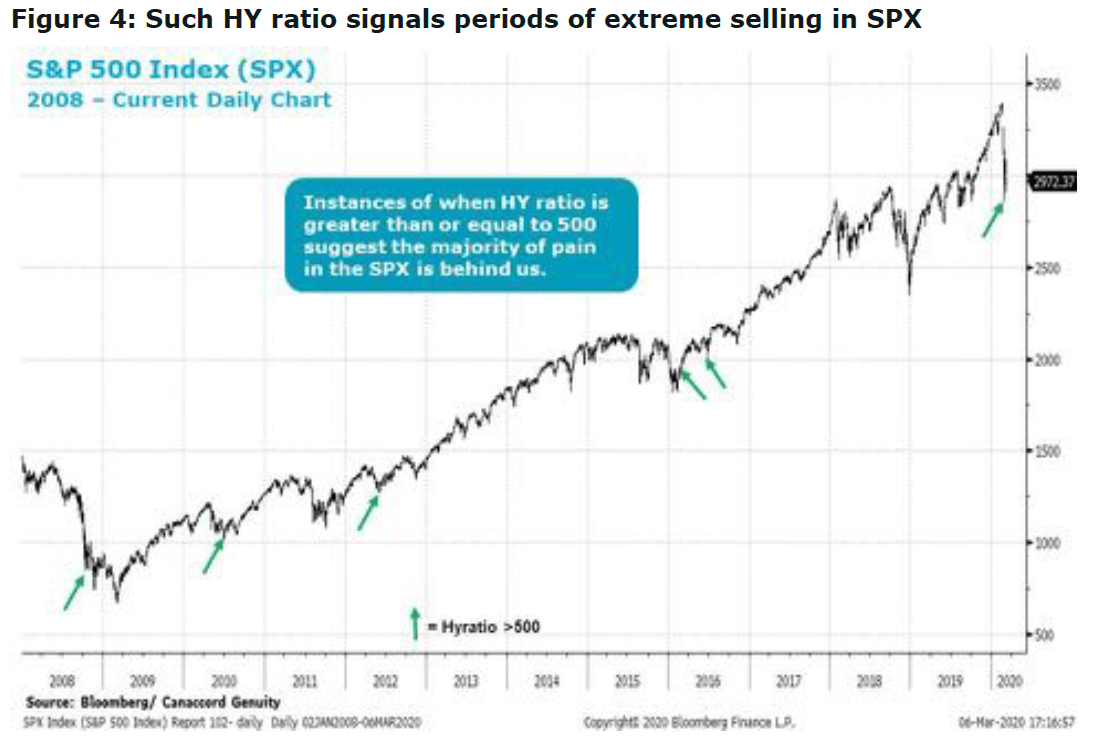 They also point out that the high yield corporate bond market has also been under a lot of pressure over the last two weeks. Investors were de-risking their portfolios amid news about the spread of the coronavirus. They note that the price war in oil will likely make things even worse. While the spread between high yield and U.S. Treasuries has been widening, the ratio of high yield to Treasuries is close to historic levels. 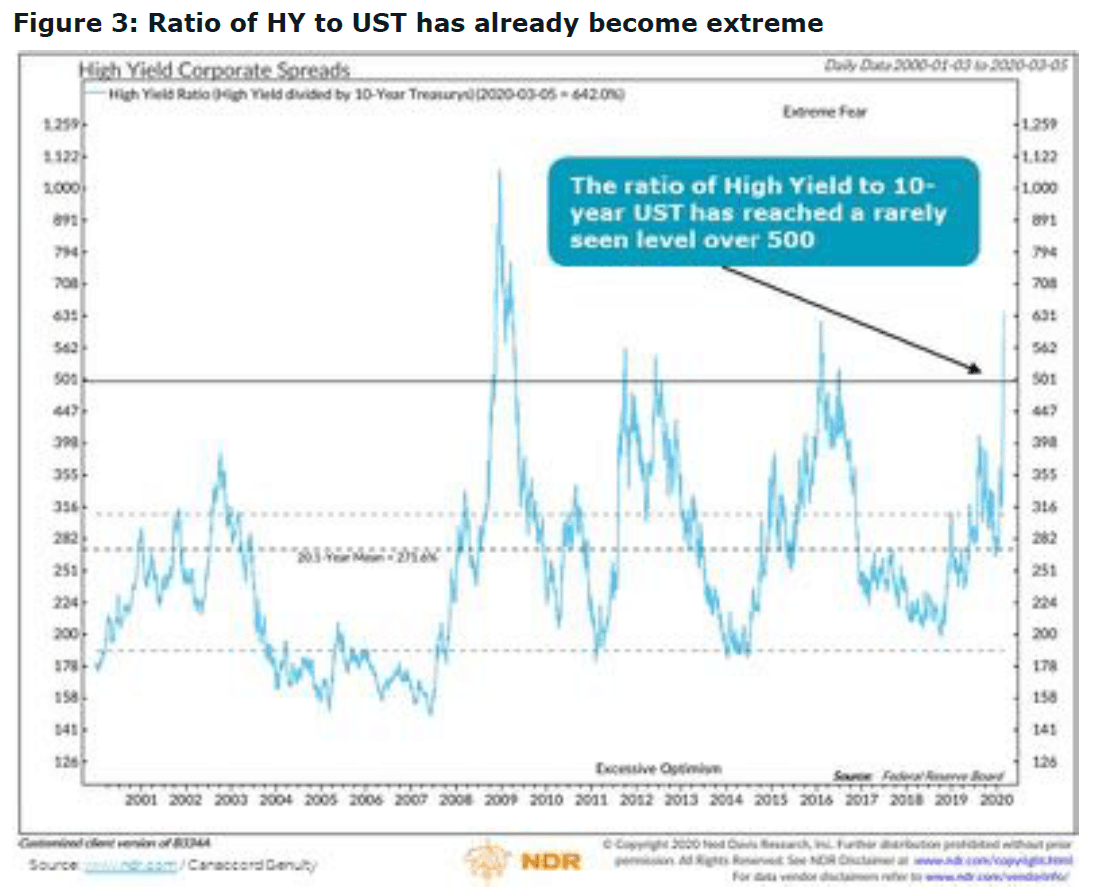 They add that this helps identify areas in the corporate market that are signaling selling extremes in the S&P 500.

There's been talk about central banks buying other assets in addition to bonds, mortgages and agency debt, and the Canaccord Genuity team seems to think that this is where the market is heading. They called attention to a remark from Boston Fed President Rosengren, who is usually one of the most hawkish members of the FOMC.

He said, "The Fed may need the ability to buy securities beyond the Treasury, mortgage and agency debt it can now hold. We should allow the central bank to purchase a broader range of securities or assets."

The Canaccord Genuity team do expect stocks to continue falling in the near term, which would extend the bear market in the S&P 500 and Dow Jones. However, the coronavirus pandemic will also bring monetary and fiscal stimulus.

"Given the historically oversold condition, the market is again set up for a 'rip your face off bounce' before ultimately heading back to the low as the weaker economic data begins to emerge a few weeks from now," they wrote. "The volatility we have seen is unlikely to change, with both historic up and down days as was the case in 2011."

They also said it's too early to say a recession is imminent, but they note that some idea of one has entered "the psyche of investors" over the last two weeks, based on the asset class de-risking. Even if a recession comes, they would wait for a "multi-week reflex rally" before reacting to it.

Some are going long during the Dow Jones, S&P 500 bear market

Canaccord Genuity isn't the only one thinking about a rally in the Dow Jones and S&P 500 bear market. Laffer Tengler Investments CIO Nancy Tengler told CNBC that since hedging her clients' portfolios, she has seen the recent declines as potential opportunities. She also said that on Tuesday, her firm started entering the long-only space.

She added that they sold out of some of their consumer staples positions that had been outperforming, like Walmart and PepsiCo, and "added to some more cyclical exposure." She named Microsoft, Salesforce, Facebook and T.J. Maxx. She also said that they're "gingerly stepping in" on the long side rather than "going in with both feet." They're taking their time and "picking away at the higher-quality names."

As with every bull/ bear debate, there are two sides to the story. Click here for the bear case for the S&P 500, Dow Jones and other stocks.