The second piece of this series points out that, beyond the buzzwords that are part and parcel of any investment cycle – as underscored in the table below – there are fundamental distinctions between the 1990s’ and today’s tech booms. 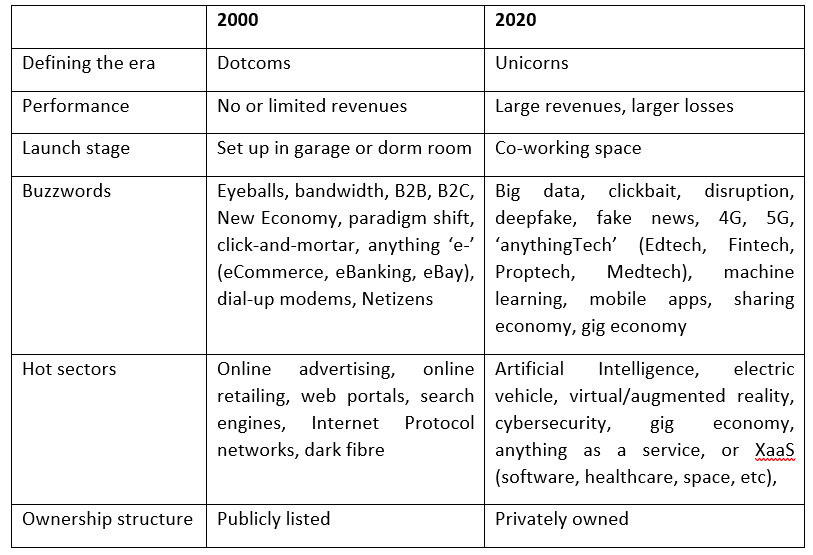 Today, most M&A activity by Big Tech is done incrementally, one digestible chunk at a time. Microsoft’s $26 billion LinkedIn acquisition in 2016 represented 5% of the software giant’s enterprise value. Facebook’s $19 billion acquisition of WhatsApp, while a tidy sum for a free-service app, was primarily financed with Facebook stock and was equivalent to 10% of the acquirer’s market capitalization. Mega deals, such as the $300 billion merger in January 2000 between AOL and Time Warner, are for now confined to the history books.

If valuations and deal sizes during this cycle have remained tame in public markets, private investors have not shown the same kind of restraint. In October 1999, the combined market cap of the top 200 Internet stocks was $450 billion. But their valuation metrics were not as extreme as some pundits now claim. Here are two takeaways:

So what separates the 2000 start-up vintage to the current batch is not that today’s valuations are better grounded - in both scenarios, heavy loss-making is par for the course.The key distinction is one of size. Losses generated by today’s start-ups are much greater. The bets have scaled up, yet they do not provide better guidance about the odds of success.

At the current pace, this year or 2021 is likely to witness the emergence of the 500th unicorn (a privately-owned start-up valued at $1 billion or more). Advocates of this generation of richly-valued tech firms argue that the pioneers of the Internet revolution - say, Amazon and Google - are now among the most valuable companies in the world. But the same cannot be said of previous market darlings like AOL and Netscape.

The fact that a handful of companies become extremely successful does not prove that a long tail of market participants can justify the hopes placed in them. Re-ratings are very common in the tech world. When it hit its highest valuation during the dotcom era, Yahoo! was worth $125 billion - less than four years after going public at a $300 million market cap. It sold itself to Verizon for less than $5 billion three years ago, admittedly without its stake in Yahoo! Japan.

Many tech firms will meet a humbling fate when the 2015-20 vintage turns into vinegar. Unicorn entrepreneurs and investors expect future market success, hoping that by the time the business comes into contact with the public, it will have grown into its valuation. Yet, because start-ups stay under private-ownership longer, it is unclear what these businesses are truly worth. Stock markets can temporarily be mispriced, but eventually they offer a reality check to companies seeking to float, as WeWork discovered last fall.

Not only have all-time-low interest rates fed the current search for yield and artificially turbocharged the valuation of illiquid, risky assets, but the trend was amplified by the central banks’ inability to turn off the quantitative easing tab.

In the decade since the Great Recession, American, European and Japanese central banks are reported to have bought more than $5 trillion worth of government and corporate bonds, mortgage-backed securities and even stocks. Their actions have sustained the tech investment cycle.

The current market expansion is very global in scope, with 10% of unicorns raised in Europe and a quarter bred in China. PitchBook reports that Europe’s deal values reached €32.4 billion in 2019, up one-third on the prior year and from €4.5 billion in 2009. Many Chinese unicorns have followed Silicon Valley’s cash-burning and blitzscaling playbook, though not always its loss-making habit. Both Xiaomi and TikTok’s creator ByteDance posted profits within a few years of launching. Confronted with a trade war and anti-government protests in Hong Kong, China recorded a significant drop in VC funding last year, down almost two-thirds on 2018. However, there is no denying that the hunt for billion-dollar-start-ups has contributed to significant capital overhang across the globe.

In the third part of this series, we will see that unicorn entrepreneurs and VC investors are behaving very differently from those of the dotcom days