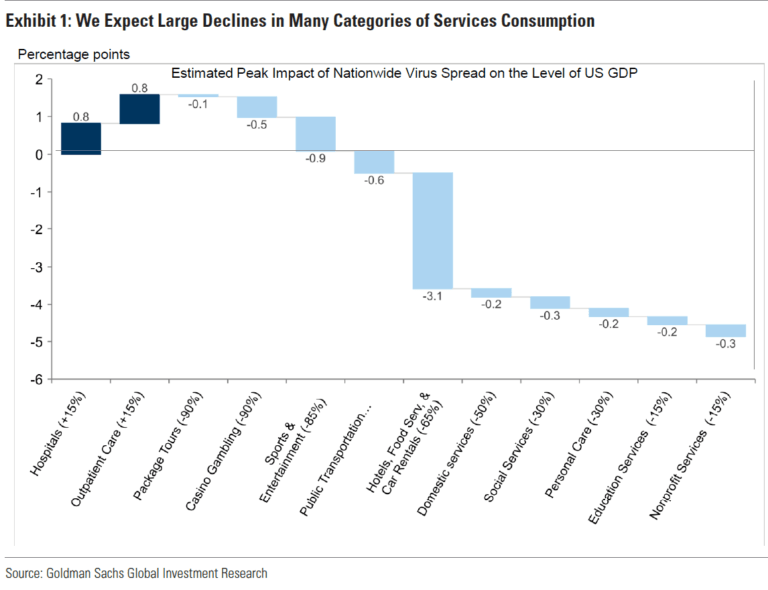 The coronavirus has halted much of the U.S. economy, and that means a surge in unemployment. The numbers we’re starting to see from analysts and economists are shocking. However, the almost total shutdown in activity suggests things could be a whole lot worse than early estimates.

The first signal that unemployment is about to surge came on Thursday when the Labor Department released its preliminary numbers. The number of initial unemployment claims surged to 281,000 last week, compared to 211,000 the week before.

That increase of 70,000 is bigger than any week-over-week change that occurred during the 2008 financial crisis. This number is expected to skyrocket even more next week. Jobless claims in Washington state, which felt the impact of the coronavirus before the rest of the country, more than doubled last week.

Social distancing to cause unemployment surge

In a report today, Goldman Sachs analyst Jan Hatzius and team note that news reports are already indicating that a surge in layoffs and unemployment is underway. Social distancing has collapsed spending in unprecedented declines, both in size and speed.

Many schools, stores, offices, factories and construction sites have been shut down. The result has been a massive surge in layoffs, leading to soaring unemployment. Because of all the closures, they expect a much sharper decline in GDP for both the first and second quarters. Thus, they revised their economic forecast for the U.S. much lower.

Using high-frequency spending indicators and anecdotes about revenue declines from news reports, the Goldman Sachs team predicts steep declines in service categories requiring face-to-face interactions. They're forecasting an 85% decline in sports and entertainment spending, a 75% decline in transportation spending, and a 65% decline in hotel and restaurant spending.

They then multiplied those declines by the share of GDP for each service category to estimate the impact on overall GDP: The Goldman Sachs team also predicts steep declines in other sectors in addition to services. They said manufacturing seems to be contracting more sharply than they initially projected. Hard data from February already indicated a decline in the sector then, and the Empire and Philadelphia manufacturing surveys indicated that March brought further declines.

They were initially including factory shutdowns due to supply chain disruptions. However, the largest automakers decided to shutter their factories, which means they also needed to factor in shutdowns due to worker fears about the coronavirus.

The firm's analysts also call attention to weakness in high-frequency housing numbers in Asia where the coronavirus hit first. They also factored in reports of open house cancellations and halts in construction projects. They're now forecasting a 50% decline in broker commissions and home improvement and building spending.

Overall, they're forecasting declines in service consumption, manufacturing and building investment, which they believe will reduce GDP nearly 10% in April alone. They expect this weight to gradually fade by 10% each month, although they note that the exact timing is very uncertain, and relapses are likely. The gradual recovery they are forecasting includes potential factors like mitigation and testing actions, weather, medical breakthroughs or adaptations by consumers and companies.

"The slow pace of recovery even in 2021 allows for longer-lasting scarring effects on businesses and workers," they explained. Looking at the numbers on a quarterly basis, the Goldman Sachs team cut its first-quarter estimate to -6% from -0.2%. They now forecast a massive 24% decline in GDP for the second quarter, compared to their previous estimate of a 5% decline.

"A decline of this magnitude would be nearly two-and-a-half times the size of the largest quarterly decline in the history of the modern GDP statistics," they noted. "… It would mean that in only one quarter, the economy would experience an increase in the output gap bigger than that experienced in the entirety of every postwar US recession."

The previous record-high decline was in the first quarter of 1958 when GDP plunged 10%.

They're forecasting such an extreme drop in GDP for the second quarter because of the sudden halt in economic activity in response to the coronavirus, which is unprecedented. Some states have even issued shutdown orders statewide to slow the spread of the virus and avoid overwhelming the healthcare system. They add that their forecasts call for what the numbers will look like when the final print of all GDP data is in hand. And they believe the initial release of second-quarter GDP growth will be less negative than the revised data. They said the initial numbers will depend on assumptions national accounts statisticians make about data that's not available yet.

The steep decline in GDP means a major surge in unemployment. The Goldman team took three different approaches to estimate this unemployment surge.

The first is a basic calculation using Okun's Law. This implies an increase of almost four percentage points from the increase of eight percentage points in the output gap by the second quarter. Usually, a short-lived contraction would trigger a much smaller effect because layoffs tend to lag growth. However, the Goldman team notes that the surge in layoffs seems to be happening rapidly.

The third method involves a bottom-up analysis of likely job losses by sector and job. For example, workers in service and retail industries are likely to be laid off as consumption in those area plunges. This method points to an increase of six to seven percentage points in unemployment.

Factoring in all three of these methods, Goldman is looking for an increase of 5.5 percentage points in the unemployment rate over the next two quarters. That boosts unemployment from 3.5% to 9%.

A risk to their forecast is that the headline U3 unemployment could increase by less than they expect if shutdowns keep workers from looking for jobs. In order to qualify for unemployment, workers must be actively search for jobs, although filling out online job applications does count. Some states have waived this requirement.

Because of this risk, they believe their forecast could be more likely to appear in the U5 unemployment rate, which includes workers who want to work and are available but didn't look for a job.