On January 30, 2020, the International Health Regulations Emergency Committee of the World Health Organization declared the outbreak of the Novel Coronavirus (COVID-19) a “public health emergency of international concern”. As we write, almost 81,000 people in China have been infected with the virus, with over 30,000 cases elsewhere.

In this paper, we assess how our risk-managed global equity strategy has performed since the emergence of the virus and what the immediate future holds.

Market implications of the Coronavirus

In addition to the humanitarian toll, which has been immense, the Coronavirus outbreak has had significant market implications for emerging markets and beyond. In January, emerging equity markets reversed 2019’s year-end rally to close the month lower despite positive momentum from the US and China signing their “phase one” trade agreement. The sell-off, which saw the MSCI Emerging Markets TR Net fall nearly 5%, was predominately driven by Asian markets, with the outbreak of the virus triggering substantial shifts during the month. Although the fallout was largely focused on Chinese and Asian markets, the emerging markets in Europe also registered negative performances in January, with Greece particularly weak. While most sectors had a disappointing month, Software and Health Care stocks delivered positive returns. The uncertainty also interrupted the strong performance of higher beta growth stocks.

Moving into February, global equity markets fell sharply given the increasing number of reported COVID-19 cases in mainland China and some developed markets. The outbreak has created heightened market volatility, particularly at the end of February when markets suffered their worst week since the global financial crisis.

Concerns over growth continued to weigh on the global economic outlook and the oil price experienced another sharp drop during the month. Emerging equity markets also underperformed, but held up relatively well compared to their developed market counterparts, partially due to the downturn they had already experienced at the end of January.

Although China fared relatively well on the back of the country’s central bank providing fiscal stimulus to the economy, some traditionally defensive markets, such as Thailand and South Korea, failed to cushion the market panic. Among sectors, communication services, real estate and health care stocks fared slightly better than the broader market (albeit still down), while energy was the weakest sector.

How has our risk-managed equities portfolio performed?

The strategy favours industries such as telecommunications, utilities and pharmaceuticals, which are relatively immune to economic cycles and have more defensive characteristics. These companies provide products and services that are needed in both good and bad times. On the other hand, the portfolio is less exposed to retailing and media & entertainment when compared to the market index.

To better understand the market impact of the current outbreak, we examined the response of our risk-managed global equities strategy during other similar situations, analysing relative performance during the 2009 H1N1 Pandemic Influenza, the 2013 Avian Influenza A (H7N9) and the Ebola Virus from 2014 to 2016. As shown below, the strategy tends to exhibit a smaller drawdown than the broader market when such black swan events occur. 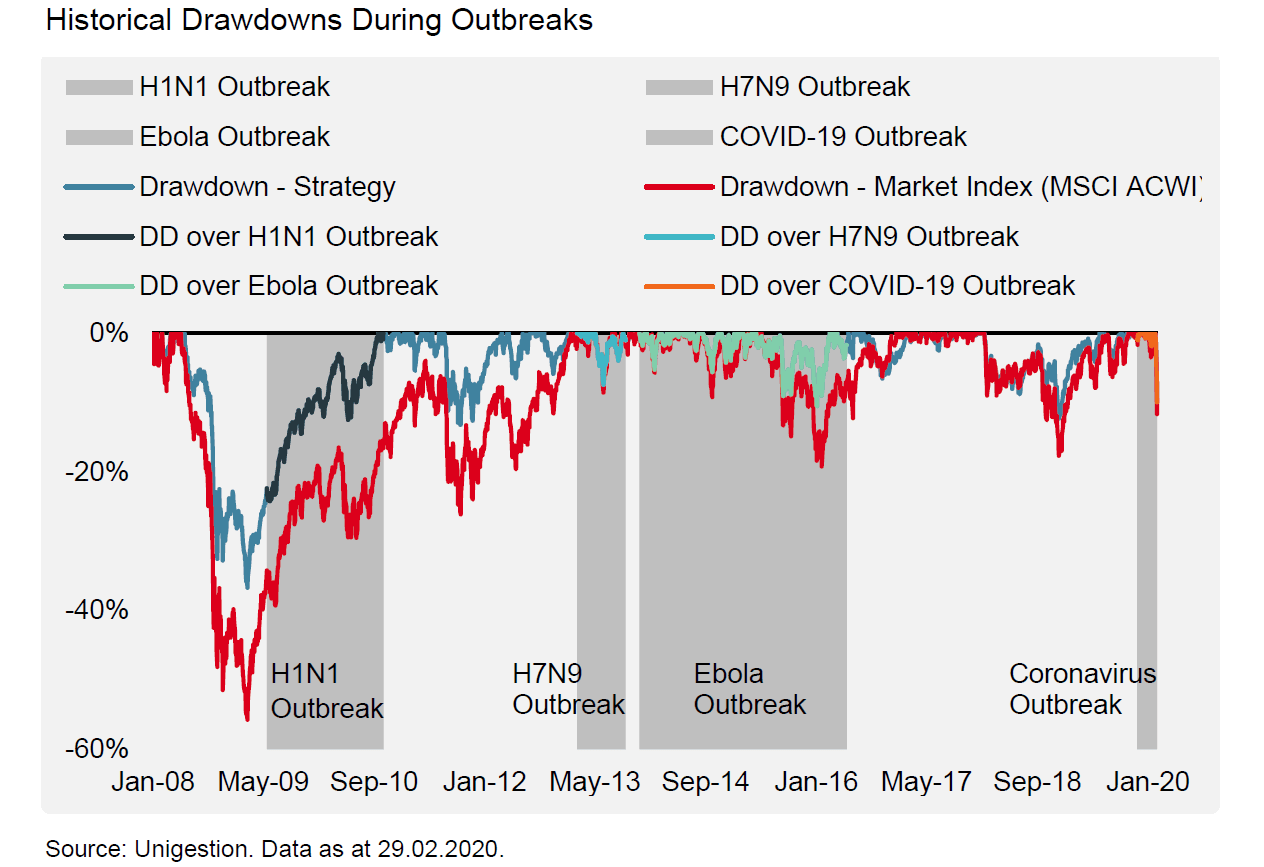 Consequences on the portfolio

We are keeping a close eye on the development of the COVID-19 crisis and are currently reviewing our exposure to Thailand, which is one of our largest overweights, and envision a significant trimming in our emerging market portfolios.

Since the outbreak, Thailand has been hit hard due to its high exposure to tourism, particularly from China. The tourism industry represents roughly 15% of the country’s GDP and Chinese tourists account for 1 out of 3 international arrivals. Thailand also entered this challenging period with relatively weak economic momentum and exports, as well as tourism, will take a hit short-term. In response, the central bank has cut interest rates to 1% (an historical low) and with a 40% government debt to GDP ratio, there is ample room for a large fiscal stimulus package.

We are also carefully assessing our positions in stocks with significant exposure to the virus, in particular holdings linked to the tourism and travel businesses. For example, we have taken action on some of the most exposed stocks (Airport of Thailand, Krung Thai Bank). So far, our portfolios have shown some downside resilience and we expect them to provide even better protection over the longer term.

We witnessed similar behaviour in October 2008 from our global portfolio, when the strategy posted a downside capture above 85% while the market was losing more than 20%.

The sell-off was borne out of the combination of fears for expected future economic growth, extreme valuations and market specifics such as the weight of systematic and passive strategy positions. The number of people affected by the disease surged outside of Asia, meaningfully increasing the possibility of seeing the same type of massive quarantines that were implemented in China and jolting investors out of complacency. In Europe and the US, big corporations have advised their employees to avoid travelling for business, schools have closed, hotels have been quarantined and summits cancelled in a global effort to stop the propagation.

But how much can this economic lockup weigh on growth? Looking at the epidemic literature, the standard influenza model assumes schools will close with a 90% compliance rate and households imposing quarantines of two weeks with a 60% compliance rate (adult and child social distancing). This is what has been implemented in China in the most affected region. Taking the average GDP per capita for two weeks allows us to proxy the impact on countries’ GDP. The results of our computations based on these hypotheses show that the impact would be -2.3% of growth. This would leave China with a tepid 3% growth and the US with a marginally negative expected GDP, while Europe would be pushed into recession, given its lower potential rate of growth.

Recent data released from China corroborate this calculation: China PMI releases are at their lowest levels on record. The manufacturing indicator dropped to 35 while services plummeted to 29, much lower than 2008 levels. We will monitor the impact on the upcoming data in our Growth Nowcaster on a daily basis, to determine whether it will be a deep, long lasting shock, or a short-term dip.

For now, we do not see a major recession arising from the spreading of the virus, but rather a marked slowdown followed by a recovery.

Sentiment has been in the driver’s seat and has become significantly more bearish. Outflows from risk assets have been gigantic, with at least USD 20bn pulled out of equity mutual funds and ETFs in the last week of February, and more than USD 5bn out of major credit funds. Systematic deleveraging took its toll as volatility exploded, sending risk appetite all the way from extreme optimism into despair and extreme pessimism.

Valuations have seen a correction, especially for growth-related assets. However, they remain well above their historic average. For example, if we look at the Shiller’s CAPE ratio, it is still at around 30, lower than in the dotcom bubble, but well above 2007 levels. Finally, an important part to sentiment stabilisation will need to come from central banks, who have already tried to reassure regarding the future path of economic activity and their intention to act if necessary. As an example, in an emergency move on 3 March, the US Federal Reserve cut interest rates by 50bps. We are likely to see further easing globally.