Bitcoin predictions are a dime a dozen. However, the halving is not a prediction. It’s a feature that was hard coded into Bitcoin in its inception, and it’s guaranteed to happen. The next halving will occur on 12 May 2020. While the timing of the halving is predictable, its impacts are quite unpredictable. Some people say it will cause Bitcoin prices to rise, others say it will cause prices to fall. There are reasons to believe both. If you want the Bitcoin halving explained, and want a clear guide to how it may impact Bitcoin prices, this guide is for you.

There are currently about 18.3 million Bitcoin in existence, and new Bitcoin are entering the world at an average rate of 1,800 per day. This is Bitcoin’s “issuance rate”.

The halving is when Bitcoin’s issuance rate gets cut in half. This means that in May 2020, the number of new Bitcoin being created will drop from 1,800 per day to 900 per day.

The halving happens every few years. This will be Bitcoin’s fourth halving. 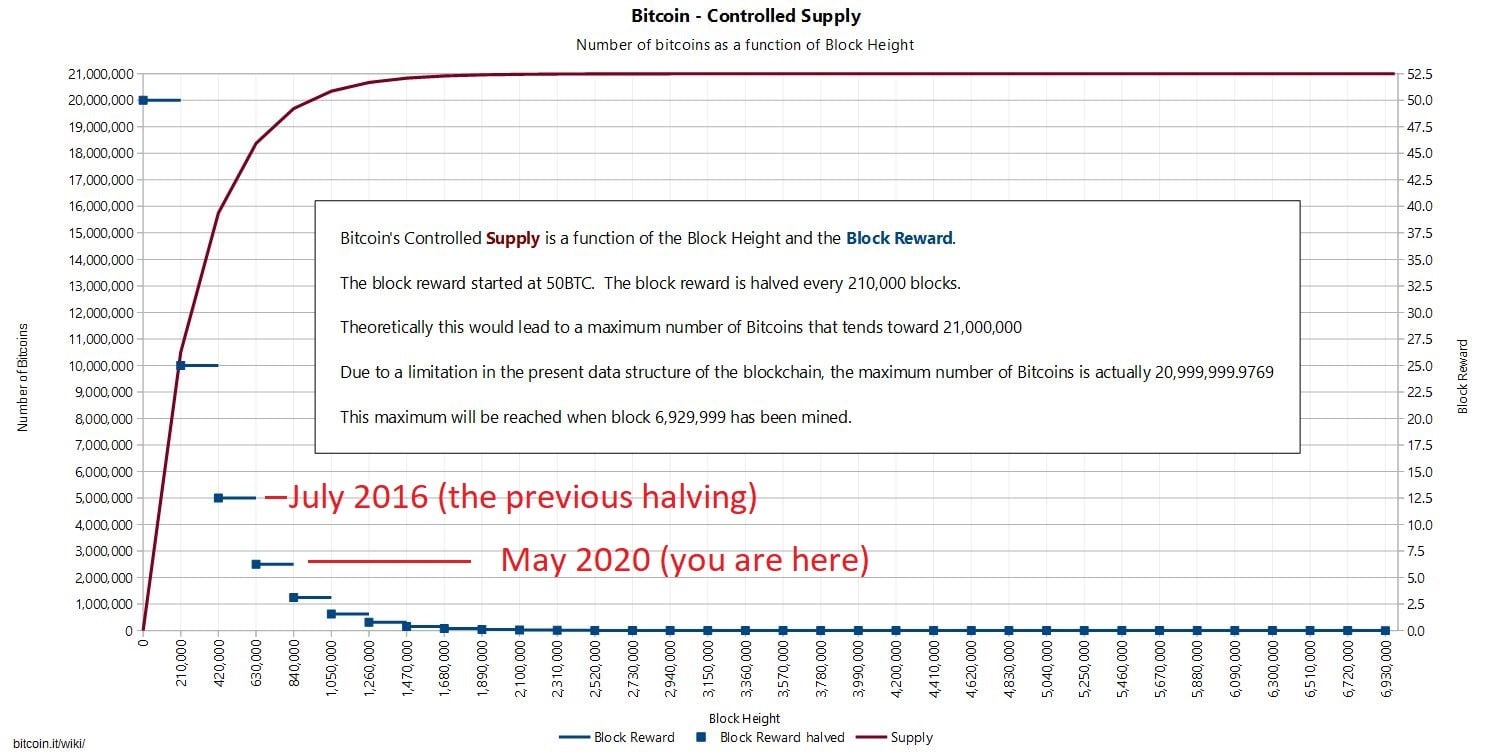 Why the Bitcoin halving is important

One way or another, the Bitcoin halving will be impactful. This is because newly created Bitcoin are given to Bitcoin miners. It’s how they fund their operations and pay for all the equipment and electricity that goes into Bitcoin mining.

However, the margins on Bitcoin mining are usually quite thin, and it’s an extremely competitive industry. This means miners are constantly expanding their operations to the very edge of profitability. Consequently, any decrease in mining profitability can be very problematic for them.

That’s what the halving will do, in a very big way. It will instantly cut profitability in half. It’s an enormous, sudden change that completely changes the picture for mining.

This means that one of the following things is 100% guaranteed to happen before or around 12 May 2020.

The halving is a rare piece of certainty in the unpredictable world of cryptocurrency. Most Bitcoin predictions are hot air, but the above scenarios aren’t predictions, they’re facts. One of these three things is 100% guaranteed to happen in the next few months.

But the question for anyone thinking of buying Bitcoin is whether this is more likely to make Bitcoin prices go up, or go down.

Why the halving will make Bitcoin prices go up

Since its inception, a lot of people have tried to rationally work out a fair way of valuing Bitcoin. But there are very few models that can say something is fairly priced at both a single cent the way Bitcoin was in its early days, and at $10,000 the way Bitcoin was around the start of 2020.

One of the few economic models that successfully accommodates this variation is called the stock to flow model.

The idea is that this model tells us what each Bitcoin “should” be worth. And as we can see, real life Bitcoin prices have tended to run very close to the price indicated by the stock to flow model. 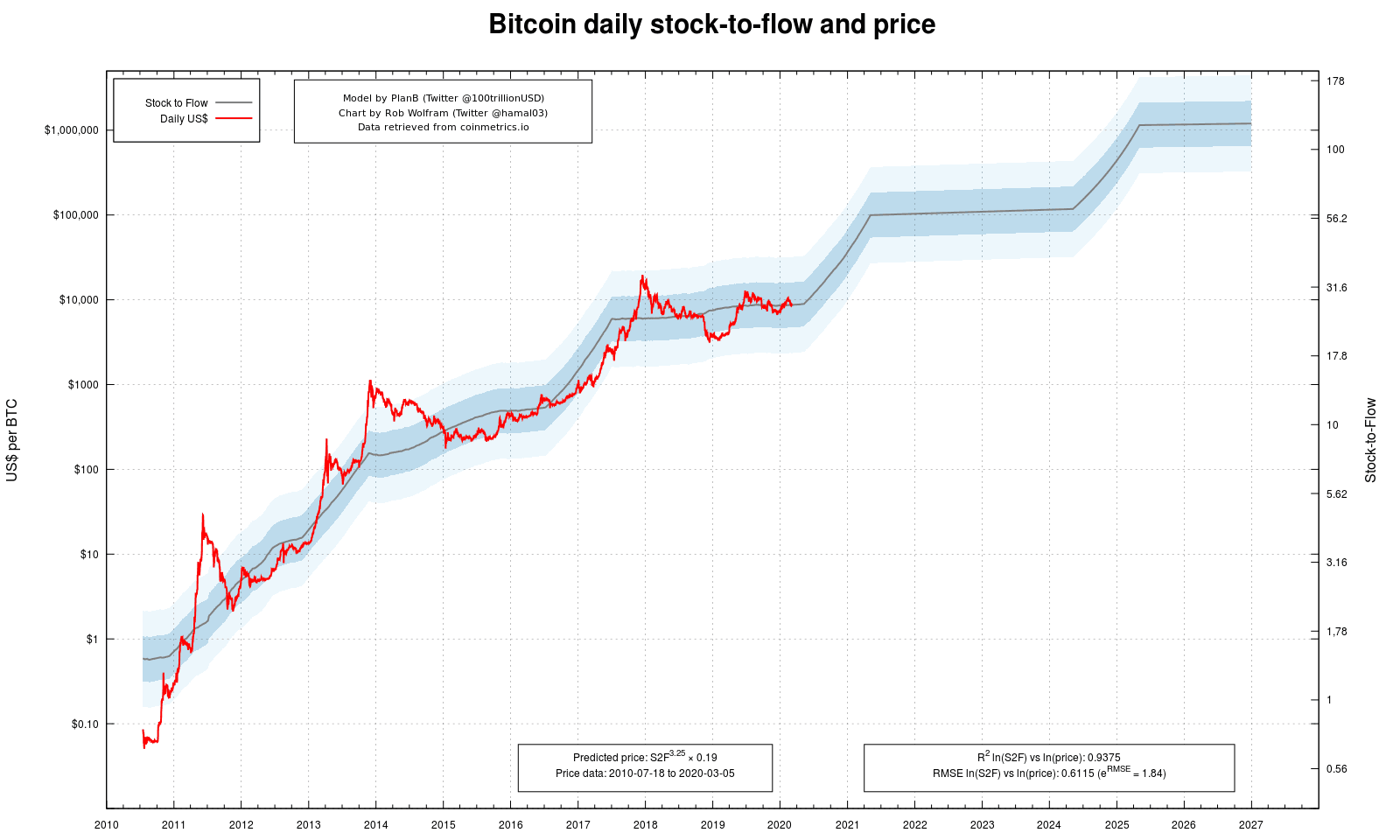 The stock to flow formula is very simple: the number of Bitcoin in existence divided by the number of new Bitcoin created each year.

The answer is constantly changing, because the number of Bitcoin in existence (stock) is always increasing. But every few years, with each halving, Bitcoin’s issuance rate (flow) changes suddenly.

But there are no guarantees, and there are also reasons to believe it will have the opposite effect, or that it will do nothing at all.

Why the halving will make Bitcoin prices fall

Here’s the question: if everyone actually believes in that stock to flow stuff, and actually expects Bitcoin to go to $100,000, why hasn’t the market priced it in already?

This is also why the halving could make Bitcoin prices drop. It’s because people “buy the rumour and sell the news”.

In other words, prices start rising in the run-up to the halving as people anticipate future rises and buy Bitcoin in the lead-up to the halving. Then when the event actually occurs it’s a bit lacklustre, and people start selling.

We saw this very clearly during the last halving which happened on 9 July 2016.

Bitcoin prices almost doubled in the first half of 2016, leading up to the halving. But Bitcoin peaked at $750 the month before the halving, and then spent the next few months declining.

In other words, even if the stock to flow theory is accurate, it doesn’t apply immediately and prices tend to drop before it kicks in.

Of course, this is only the fourth halving, and Bitcoin is in a different place today. There’s no guarantee that history will repeat, and a ten-fold Bitcoin price increase requires a lot more money than it used to. We’re talking about trillions of dollars now, instead of just millions.

And if we look at other coins that also experience halvings, we can see that the halving doesn’t magically equal a price increase. For example, Litecoin went through the same process on 5 August 2019, with no discernible effect on price.

The upshot of all this uncertainty is that it presents an excellent test of the stock to flow theory. One way or another, the next halving will be educational.