The bear market in the S&P 500, Dow Jones Industrial Average and almost every other U.S. stock continues to deepen. Meanwhile, analysts debate how much further they have to fall before they reach a bottom and begin to stabilize. The bears are out in force now and have seized control of equities with a vengeance.

Nomura analyst Masanari Takada said in a note this week that equity sentiment is "'frozen' well below zero, particularly in developed markets." 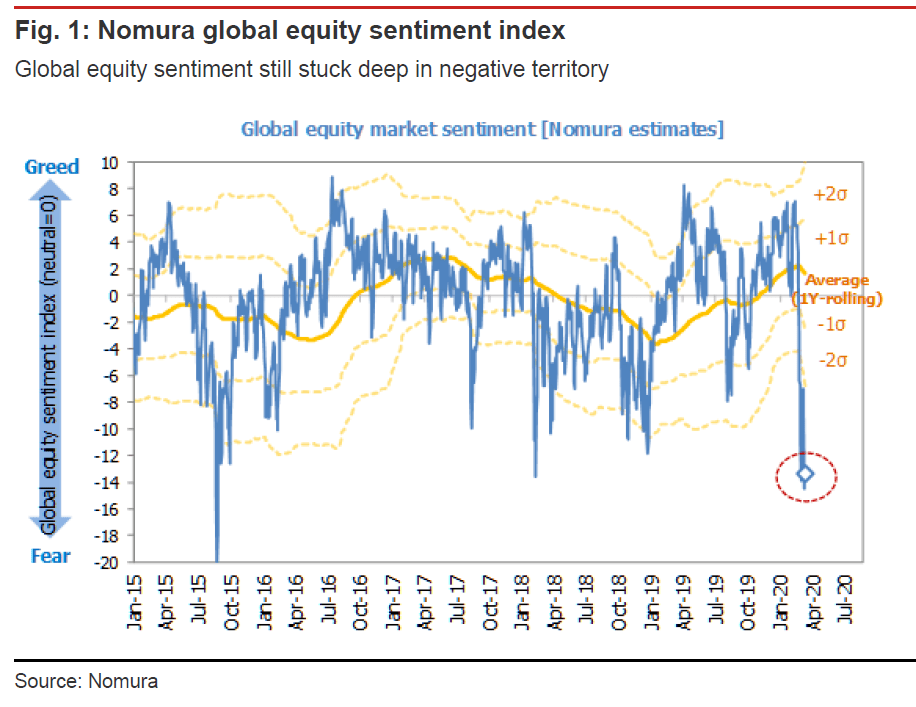 "Considering the magnitude of this unprecedented shock to investor sentiment, barring a strong of unusually positive news we see significant barriers to any quick recovery," he wrote.

He said the rally on Tuesday looked more like a technical rebound in reaction to the plunge the day before. Because of how wildly the equity market has been swinging, he advises investors to look at the overall trends averaged out instead of zooming in to study daily fluctuations in stock prices.

Credit Suisse analyst David Sneddon and team said in a note on Tuesday that they were watching for signs of stabilization in the S&P 500. At the time they were writing, the index had stabilized above its key support levels of 2,747 and 2,722, although it has since fallen below those support levels. They said that was the start of the lower end of their "typical extreme zone," which is 10% below the 200-day moving average.

On Tuesday, the S&P 500 formed a doji candlestick, which suggested that stabilization could have been in progress. However, the Credit Suisse team remains bearish until they see more concrete signs that a reversal has arrived. Since Tuesday, the index has been shifting lower and lower as panic continues to grip the markets. 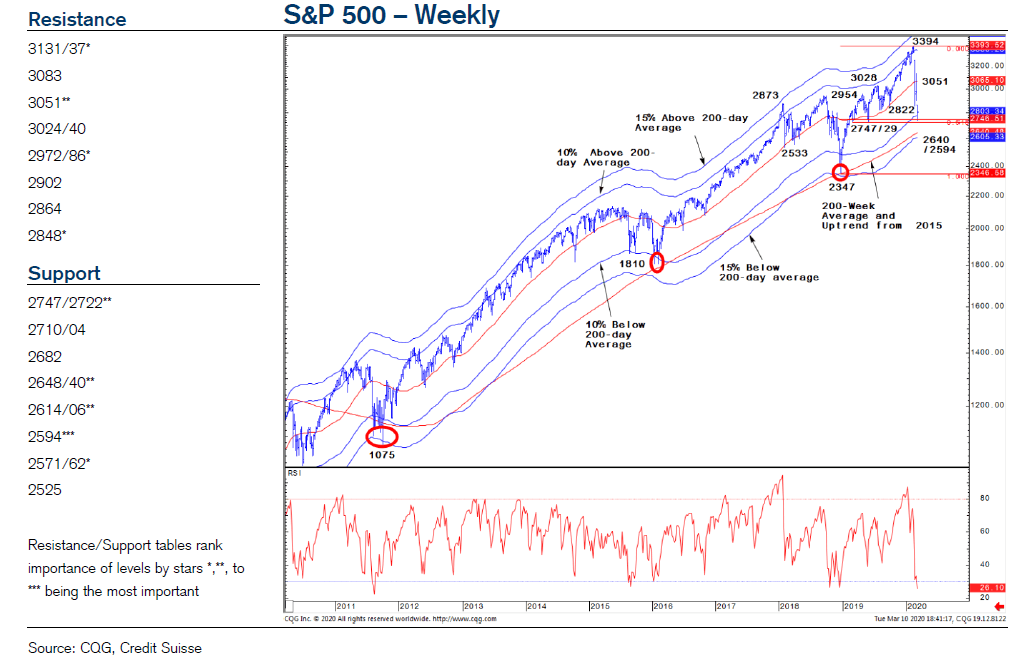 After the 2,742 and 2,722 support was broken, the next zone of support was at the 200-week average, the potential uptrend from 2015, and bottom of the lower end of their extreme zone. This area was at 2,640 and 2,594. However, the S&P 500's bear market has dragged it below those levels as well today. The Credit Suisse team saw a break below that level as "the defining line between a normal equity market drawdown and a longer-term selloff."

How much more should the S&P 500, Dow Jones fall in a bear market?

Goldman Sachs analyst Peter Oppenheimer and team released a guide to navigating a bear market earlier this week. In their guide, they considered how far the S&P 500 and Dow Jones should fall in a bear market. They considered structural, cyclical and event-driven bear markets.

In the Goldman team's opinion, the S&P 500's and Dow Jones' current bear market is an event-driven bear market. However, they warn that there is a risk that it will become a cyclical bear market.

The first is that none of the event-driven bear market examples in history were triggered by a virus or other disease outbreak. All of the events were different, but mostly they were internally market driven, like a sovereign crisis, program trading collapse, or even a political issue. In those cases, the monetary response is more effective, but this time, it's not clear that the monetary response will work. Interest rate cuts might not be effective at a time when fear is running so high and consumers are forced or otherwise just inclined to stay home.

None of the event-driven examples occurred in times when the starting point of interest rates has been so low and, in some cases negative. Thus, this raises the concern in some markets where there is less room for an effective policy response.

Finally, in past cases of viral shocks, like the SARS outbreak, stock markets tended to rebound when the second derivative of infections began to improve. The Goldman team noted that although this may be true in China, it's obviously not true in other parts of the world. Thus, the "fear factor around the economic shock from preventative measures may push markets further down in the meantime."