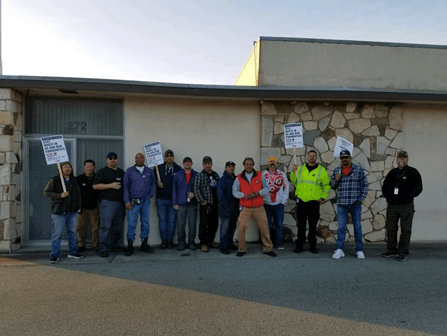 “That felt like a complete slap in the face, saying how great we were but here is your final pay stub because we did so grdeat last year so we’re going to keep this money and not invest in back into the employment force like they said they would,’ said Lorenzano, who worked at the company for over four years before receiving his termination notice, along with dozens of other AT&T DirecTV technicians across California.”

Many of the AT&T workers referenced in the story who lost their jobs, live and work in California, where just last month contract bargaining opened for more than 13,000 Communications Workers of America (CWA)-represented AT&T West workers. The union’s bargaining team is urging AT&T to negotiate an improved contract that includes wage increases, benefit protections and a commitment to keeping good, family-supporting jobs in the region. The current contract expires on April 4 and covers wireline technicians and customer service representatives in California and Nevada.

This article also comes just days after AT&T’s President and Chief Operating Officer John Stankey announced that the company would purchase another $4 billion in stock buybacks next quarter, in addition to the $4 billion the company repurchased this quarter.

Elliott Management pushed for a commitment to increase stock buybacks when the hedge fund purchased a small stake in AT&T in September 2019. Since then AT&T has catered to Elliott Management and agreed to spend $30 billion on stock buybacks, which will drive up its share price to enrich a small group of wealthy investors, leaving fewer resources for building next generation wireless and fiber broadband networks and training workers for the jobs of the future.