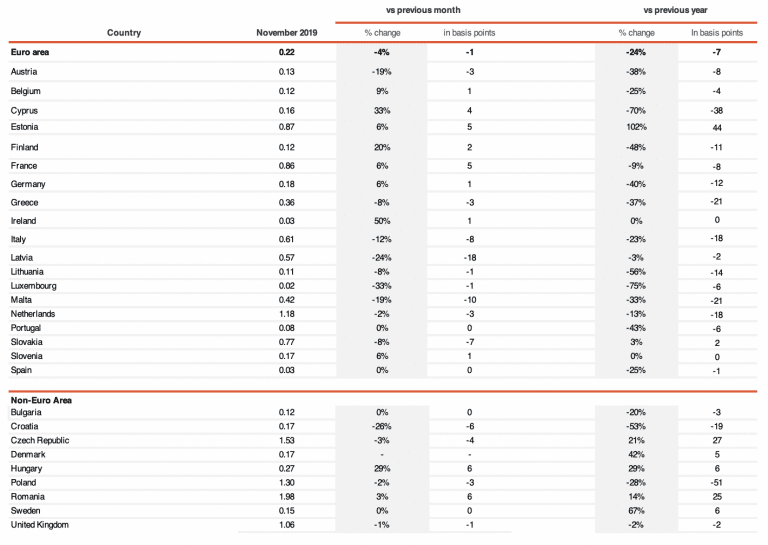 The pan-European deposits platform Raisin regularly publishes the Raisin Interest Rate Radar to assess the ongoing effect of the ECB (European Central Bank) rate policy and other factors on depositors throughout Europe. The data released by the ECB in January reflected rates up until two months prior to the release (November 2019). Further, Raisin does its own data collection and analysis to compare the top available rates and top rates from big banks in markets across Europe and the UK.

The European Central Bank will focus over the next year on performing a deep review of ECB policy stances, with a view to shaping a new approach to meet the coming decades. With ECB president Christine Lagarde’s announcement last month that the central bank sees no rate hikes or major policy shift on the immediate horizon, bank heads have begun to speak more forthrightly on the fix they see themselves put in.

This is particularly noticeable in Germany, where rates have been punishingly low on the largest banking market in continental Europe. An increasing number of banks in Germany and the Netherlands have announced that they will be passing negative rates on to retail customers for the first time. Spanish private banking clients have also already begun facing negative rates on their deposit holdings.

Meanwhile 2019 ended with disappointing European economic data and the occurrence at last of Brexit appears to have dampened the UK economy.
Europeans have already lost 350 billion EUR

A new study from German financial news portal Franke Media indicates that since 2011 Europeans have lost upwards of 350 billion EUR due to the sustained period of low interest. In 2019 their data suggest that those in the Benelux countries, Germany, and Austria suffered the most, losing more than 350 EUR per person on average. In Spain, France, and Ireland, the study shows the average saver to have lost between 130 and 180 EUR to low interest rates.

The ECB’s most recent data reflect sinking retail deposit interest rates across many European markets. Bucking the trend France ticked upward by 5 basis points while Germany, Belgium, and Ireland each moved up by 1 basis point. Malta and Latvia alone experienced 10 or more basis points in change in 1-year term deposit rates, since the last data release – both downward. All other markets in the European Economic Area felt just small shifts up or down.

As for the longer view, only in the Czech Republic, Estonia, and Romania are 1-year rates significantly up from the same time one year ago (27, 44, and 25 basis points respectively). 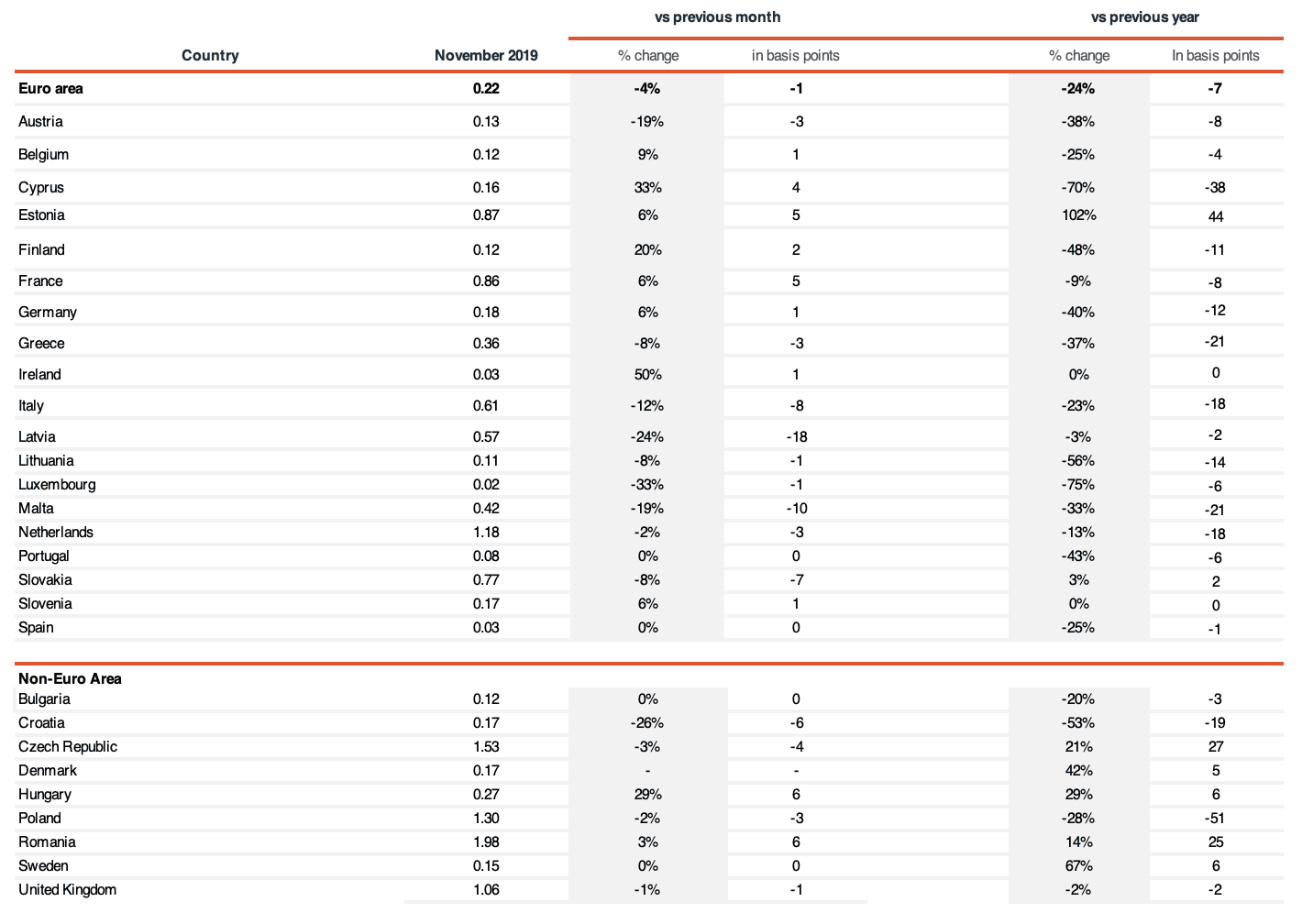 The top 3-year rates in Germany on average are now lower than the averaged top 1-year rates for deposits. Similarly Spanish 3-year deposit rates are a fraction under Spanish 1-year rates, a relationship which has held steady for over a year. Otherwise, across the European Economic Area only Norway is showing the same trend.

Once again rates stagnated or sank even lower. Within the Eurozone just Italy maintains rates on 1- and 3-year term deposits above 1.25% – at 1.32% and 1.85% respectively. Nonetheless, the three largest Italian banks don’t come close to beating inflation for their depositors, with the average of their top offers on 1-year terms at a low 0.17% (see next chart). 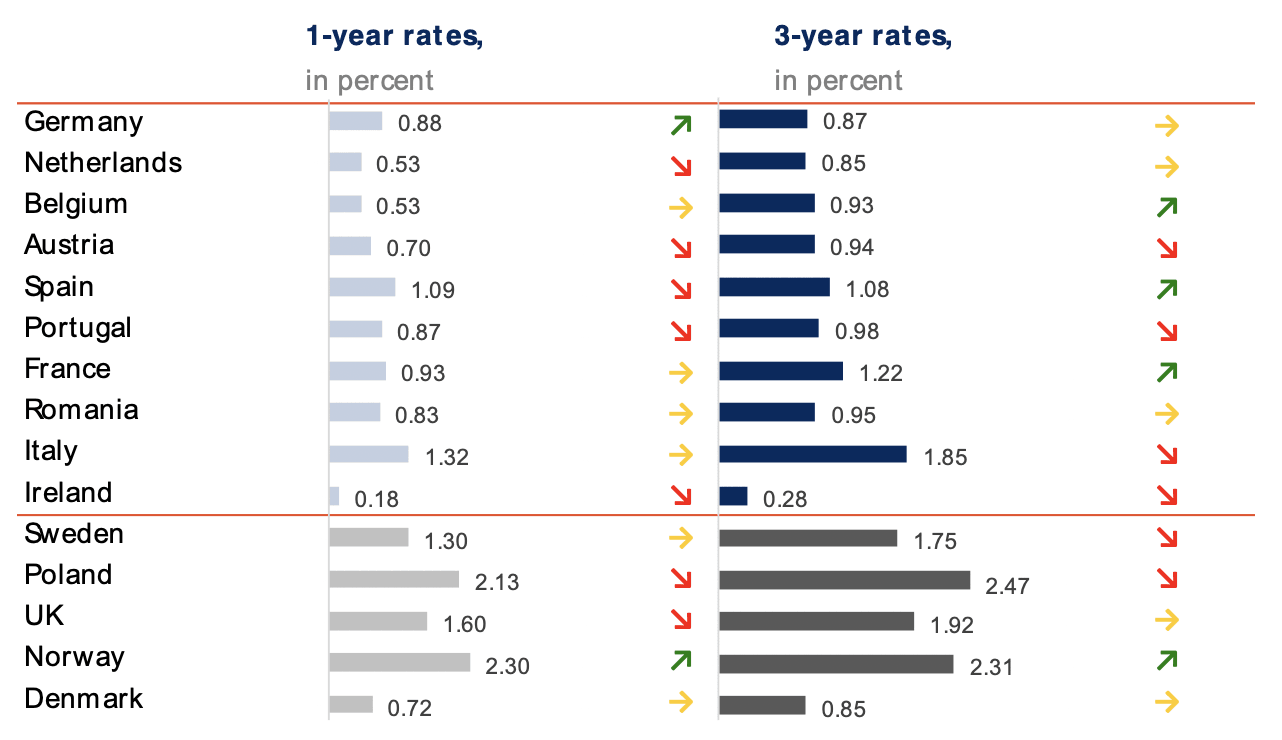 Average of the top 3 term deposit offers for retail customers based on local comparison sites as of 28/01/2020. Criteria:  EUR 10,000 deposit; 1 product per bank; offers for both new and existing clients.
The rate gap between big banks and top available offers opens wider

The yawning gap between the average interest offered by Germany’s 3 largest banks and the average rates on Germany’s top available offers* has stretched even farther. This places pressure on German depositors to stay active and search for the best offers, but also shows that there are opportunities for those willing to move their savings, as well as for smaller banks in need of high quality retail funding.

The ratio in much of Europe ranges between 5 and 8 times higher rates for depositors who move their money away from the biggest three banks in their home market, and to top available offers. Given the pervasive low rates overall, this activism on the part of depositors remains the only path to beat inflation and even break even on their savings.

In Italy and Spain in particular, savers can earn ca. a percent more on 1-year deposits (8 to 11 times the interest) with the market’s top offers. 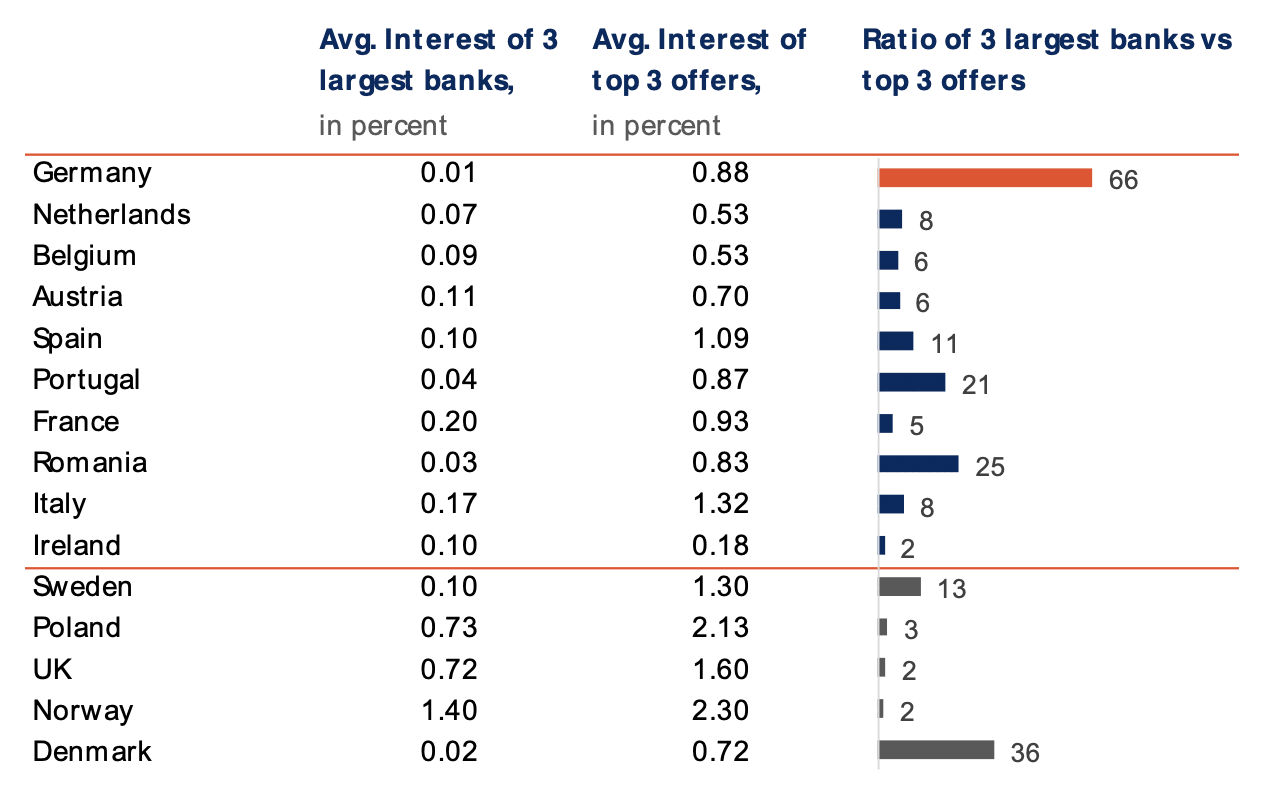 Despite average increase, companies in 7 Eurozone markets get no interest at all – or must even pay for their cash holdings

At the last release of ECB data on interest rates that we analyzed, only three countries had corporate rates over 0.5% on terms at or under 1-year – Italy, Greece and Malta. Now two of those, Italy and Greece, have seen their corporate rates sink to 0.44 and 0.46% respectively, with five markets below 0.1%.

An additional 7 markets are still at or below 0%: the Benelux countries, Germany and Austria, plus Spain and Ireland. 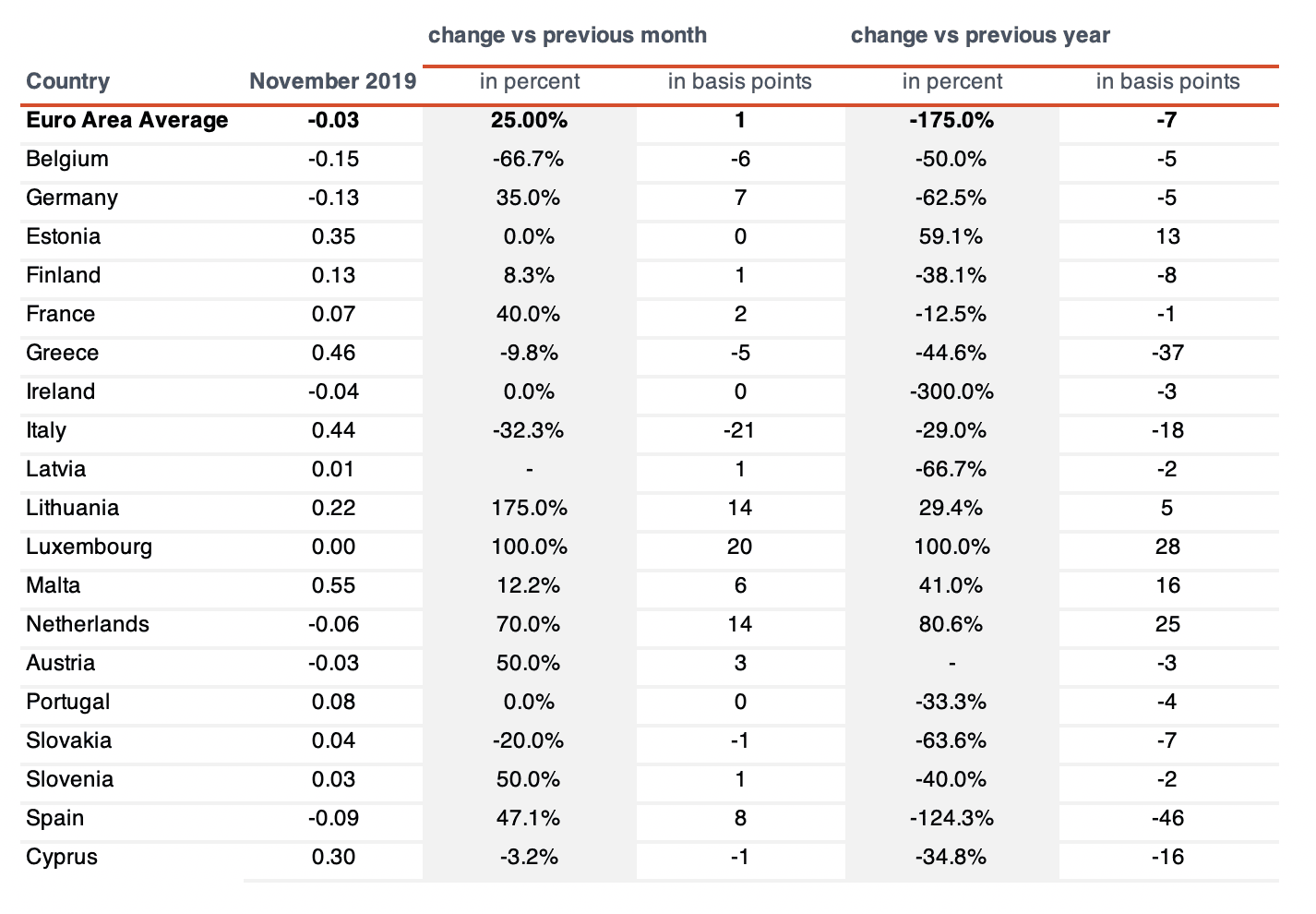 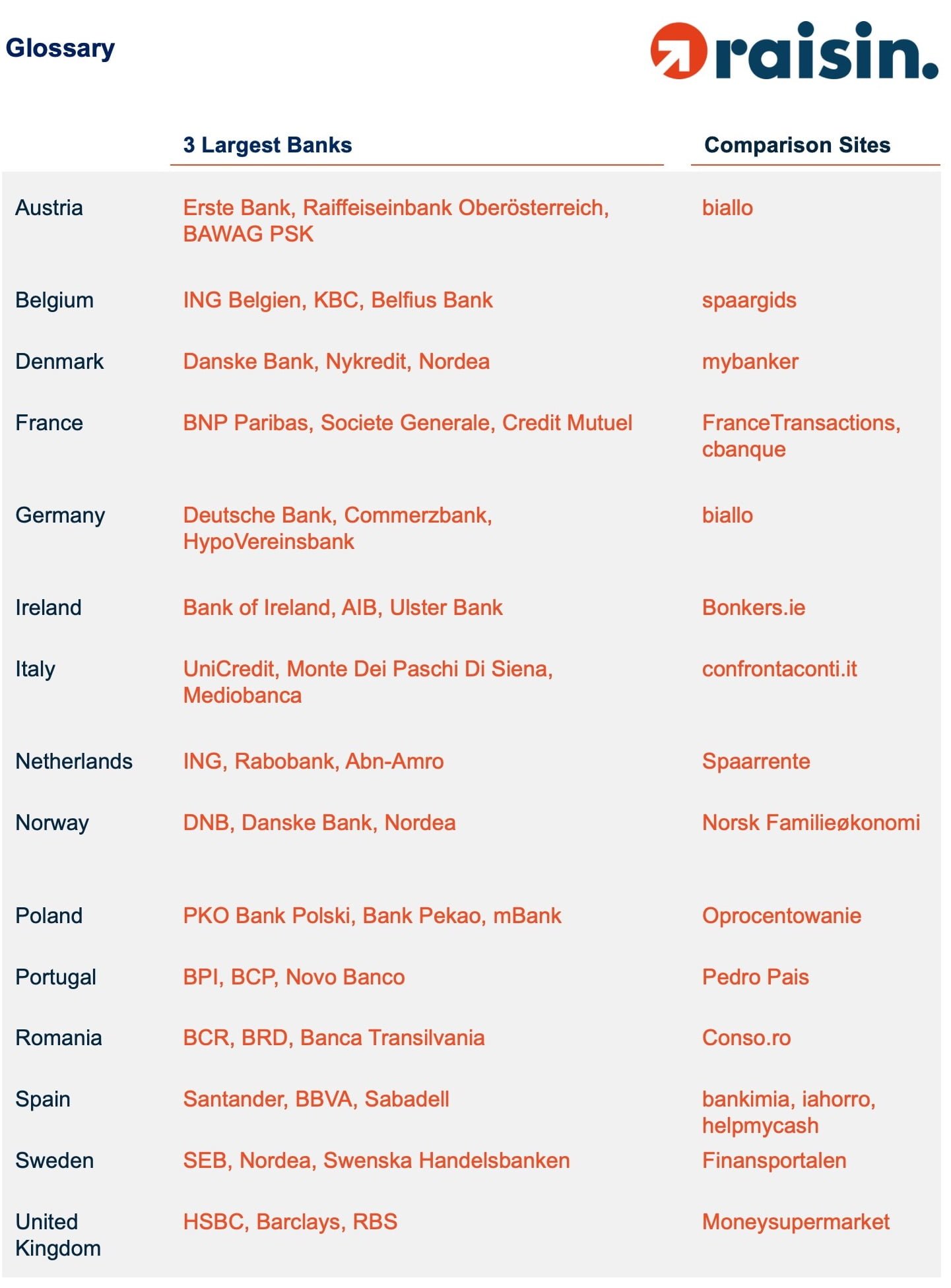 A trailblazer for open banking and the leading pan-European one-stop shop for online savings and investments, Berlin-based fintech Raisin was founded in 2012 by Dr. Tamaz Georgadze (CEO), Dr. Frank Freund (CFO) and Michael Stephan (COO). Raisin’s platforms — under the brand WeltSparen in the German-speaking world — are breaking down barriers to better savings for European consumers and SMEs: Raisin’s marketplace offers simple access at no charge to attractive and guaranteed deposit products from all over Europe, as well as globally diversified, cost-effective ETF portfolios and pension products (currently available in Germany). With one online registration, customers can choose from all available investments and subsequently manage their accounts. Since launch in 2013, Raisin has placed 20 billion EUR for more than 230,000 customers in 28+ European countries and 91 partner banks. Raisin was named to Europe’s top 5 fintechs by the renowned FinTech50 awards and is backed by prestigious European and American investors such as btov Ventures, Goldman Sachs, PayPal Ventures, Thrive Capital, Index Ventures, Orange Digital Ventures and Ribbit Capital. Raisin UK in Manchester, banking-as-a-service provider Raisin Bank in Frankfurt, pensions specialist fairr, and Raisin Technologies (formerly Choice Financial Solutions) all belong to Raisin.