It turned into a busy week for eBay after Starboard Value urged the company to spin off its Classifieds operation to help unlock “significant shareholder value” in a Tuesday public letter. The activist said there has “not been enough progress,” in completing spin offs or refreshing its board, almost a year after an agreement struck between Starboard, Elliott Management, and eBay in March 2019. The agreement saw each activist gain board representation at the company, with Elliott’s Jesse Cohn appointed to the board along with Starboard’s independent nominee Matthew Murphy. In activist short news Luckin Coffee Inc (NASDAQ:LK) responded to a shortseller campaign.

On the same day, New York Stock Exchange owner Intercontinental Exchange (ICE) reportedly made a takeover offer for the online retail marketplace. The approach reportedly valued eBay at more than $30 billion, implying an offer price of over $36 per share. By Thursday, however, the talks broke down and ICE said it was no longer perusing the transaction. ICE confirmed it had "approached eBay to explore a range of potential opportunities," but "based on investor conversations following today’s ICE earnings call, ICE has decided to cease exploring strategic opportunities with eBay."

Since its agreement with the two activists to launch a strategic review of its operations in March 2019, eBay has completed a $4 billion sale of its StubHub business and sought cost-reduction opportunities.

To arrange an online demonstration of Activist Insight Online email us at [email protected].

Muddy Waters Research took a short position in China-based beverage company Luckin Coffee, based on a "credible" anonymous report submitted to the short seller that accused the company of running an "inherently flawed" business model and faking its numbers. The report said that after the company’s $645 million initial public offering, the company began fabricating financial and operating numbers in the third quarter of 2019. The results sent Luckin’s stock price up over 160% in a little over two months and the company successfully raised another $1.1 billion in January.

The China-based beverage company later denied the allegations, calling them "misleading and false." Luckin said, "The methodology of the report is flawed, the evidence is unsubstantiated, and the allegations are unsupported speculations and malicious interpretations of events."

The number of communication services companies publicly subjected to activist demands in the 12 months ending February 07 between 2014 and 2020. 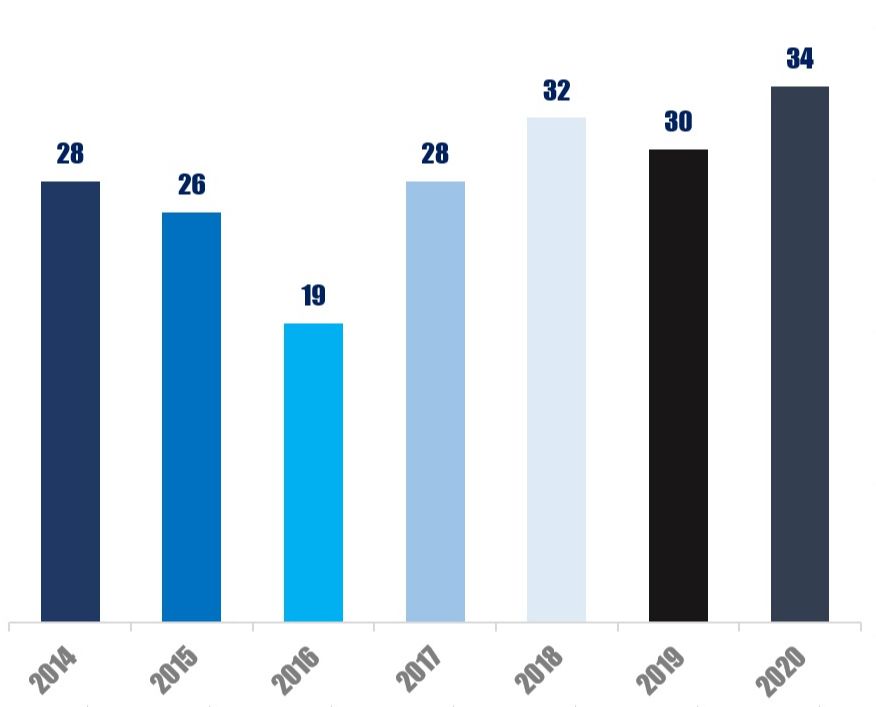