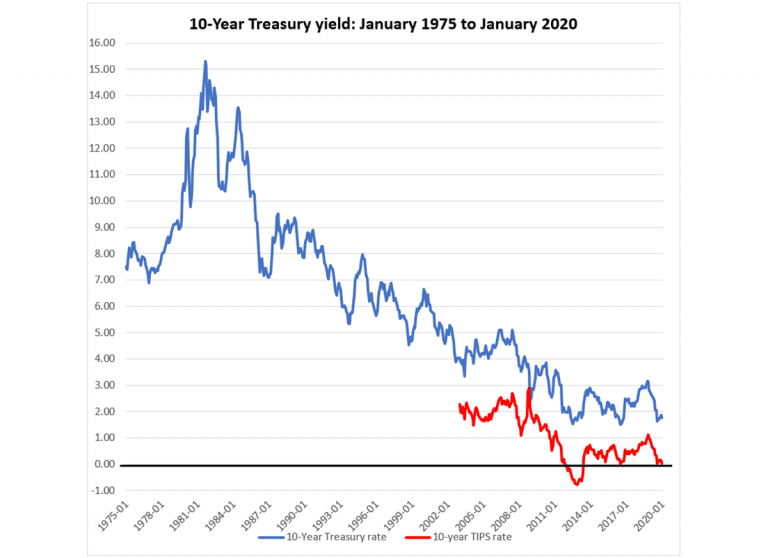 It is easy to lose sight of just how extraordinary interest rates have been in the last few years.  As a reminder, the chart below plots the 10-year U.S. Treasury yield from January 1975 through January 2020 and the 10-year Treasury Inflation Protected Security (TIPS) yield from January 2003 to January 2020.  After averaging well north of 5% most of the early period, in recent years the 10-year Treasury has often been below 2% in recent years and as of January 2020 was near a period low of 1.76%.  The same is true of the TIPS yield which stood at 0.04% as of January 2020. The government can currently borrow money for ten years at a real interest rate of zero. Such low interest rates have an impact on stock prices because they are a crucial determinant of the rate at which future cash flows are discounted to arrive at estimates of the fair value of a stock.  What is particularly important is the difference between the discount rate, often denoted by k, and the earnings growth rate, g.  It turns out that the estimated value per dollar of earnings, the P/E ratio, rises sharply as k – g falls.  The rise is particularly sharp as k – g gets to close zero as shown in the chart below. The chart explains two features of the current stock market. First, the combination of record low k’s in conjunction with somewhat typical g’s means that the difference is small.  That implies high stock prices relative to earnings on average and that is certainly the case today.  The widely followed Shiller CAPE ratio is near record highs.  Second, the low k’s imply that firms with relatively high expected growth rates are going to have particularly high stock prices. This is because the value of growth stocks, with large expected earnings in the distant future, are particularly sensitive to the rate at which those earnings are discounted.  Once again, the prediction holds.

Most of the record run in prices has been driven by tech stocks with high expected growth rates.  For instance, in a previous article I noted that Apple’s P/E ratio has doubled in the past year adding more than $700 billion to Apple’s market capitalization.  Despite the market boom for growth stocks, however, many value stocks like General Motors have languished.  GM currently trades at about the same price it did five years ago.

This interpretation also implies that the future of the market is closely tied to the future of interest rates.  If rates remain near record lows, then stock prices will remain high.  A colleague from Wharton, Prof. Jeremy Siegel, believes that rates will stay low, so he is telling his clients to allocate a larger fraction of their portfolios to stocks even at the current high prices.  He argues that interest rates are so low that investors must hold stocks to get a reasonable return on their savings.

The problem is that the sensitivity to k - g works both ways.  If interest rates were to start to rise, stock prices could fall very rapidly with the prices of growth stocks dropping the most.  The biggest threat in that regard is the current federal budget.  Never has the United States run such large deficits as a percent of GDP during peace time and with a strong economy.  So far, the ballooning deficits has not been a problem because investors, including many international investors, have been willing to purchase the trillions of new Treasury securities coming to market even at near record low rates.  However, if that preference changes and rates start to rise a negative feedback loop could be brought into play.

Given that the current outstanding Treasury debt is about $23.3 trillion, or about 80% of GDP, rising interest rates would have a major impact on required interest payments.  The increase in interest payments, in turn, would add to the deficit, thereby increasing the size of the debt, and leading to even greater interest payments in the future.  Furthermore, such a negative feedback loop could further erode investor confidence putting even more upward pressure on interest rates.

The foregoing may seem to be overly alarmist, but just yesterday President Trump predicted that the federal debt would rise past $30 trillion in the next decade despite a strong economy.  If the economy were to weaken, the impact could be catastrophic.