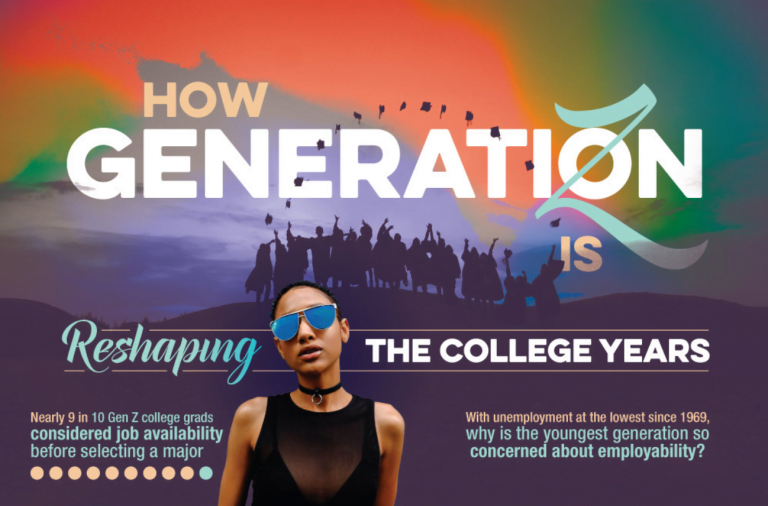 The college years were once a time to “find yourself” while spending mom and dad’s money. Now college is seen as a crucial stepping stone toward getting a better job and having a fulfilling career. While it’s true the unemployment rate is at the lowest it’s been since 1969, the majority of the jobs available are low wage, low hour jobs in service fields that don’t necessarily lead to a financially stable career path. GenZ is taking the smart route and using their education time as a time to prepare as best they can for the trials and tribulations of an increasingly difficult economy.

In December 2019, 145,000 new jobs were created. By January of 2020, the unemployment rate fell to 3.5%. Less than 1% of Americans have been jobless for more than 6 months. Unfortunately, the fastest growing jobs are in retail, healthcare, and hospitality, service jobs that traditionally have had significant downsides.

How has this impacted GenZ?

Throughout history, low unemployment and sustained job creation has led to a higher GDP, growth in wages, and a decreased rate of inflation. Jobs created since 2019 have been low wage, low hour jobs. In 1990, 52.7% of jobs were low wage, low hour jobs, while 47.3% of jobs were high wage, high hour jobs. Between 1990 and 2018, the number of low wage low hour jobs has grown to 63%, while the number of high wage high hour jobs has fallen to 37%. In that same time period. Low wage workers have seen a decrease in their working hours double that of high wage workers, which amounts to the loss of the equivalent of 3.1 million jobs. In that same time period the wage gap increased 5.3 times. Nearly half a million American workers are living on less than $18k a year.

College Is The Way Forward For GenZ

GenZers are looking for a better way forward, and for 82% of them college is the way forward. More teens are spending their summers in school instead of working summer jobs, and nearly half of GenZ high school students have already earned college credits while in high school. They are spending more time on homework and volunteering and less time working in order to make themselves better prepared for college and for life.

GenZ cares more about employment than anything else after seeing what the economy really looks like. Learn more about how GenZ is doing college differently below.