ValueWalk
Home Stocks Fraud Fest 2020; Why The Market Has Crashed 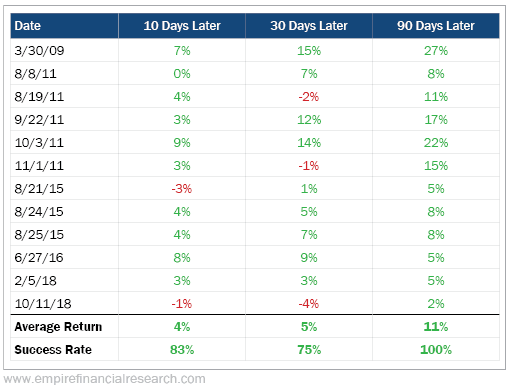 1) One of the first – and most important – things I did when I started Empire Financial Research was persuade my longtime friend Enrique Abeyta to join me. He’s not only an industry veteran with a great track record, but he thinks differently than any investor I know. I’m more traditional, which is neither good nor bad… but the key is that we complement each other well.

Enrique sent me this e-mail last night and was kind enough to allow me to share it with my readers as well:

I've been actively trading in the markets for the last 25 years and am a keen observer of patterns.

Something just happened that's extremely rare: the S&P 500 fell more than 5% in a two-day period.

I actually think that a super-high-velocity move like this is very bullish because it's a sign of quickfire panic as opposed to an unwinding of liquidity.

Furthermore, if you eliminate the roughly two and half years of clear "bear market" periods (which we're clearly not in right now), it has happened only 12 times – or 0.27% of the time.

For each of these dozen instances in which the S&P 500 fell 5% or more in two days, guess how the market did over the next 10, 30, and 90 days? The numbers are astounding, as this table shows:

The conclusion is clear: buy the f**k out of this market...

Since launching his weekly Empire Elite Trader service in late September, Enrique has been on a roll. He has closed 15 of 18 trades for winners (an 83% hit rate)... and he has an average return of 7% in 48 days (53% annualized). This month alone, he closed six positions for double-digit gains.

If you'd like to give Empire Elite Trader a try, click here. You won't regret it... It's only $69 per month, and there's absolutely no risk whatsoever – you can cancel anytime in the first 30 days for a full refund, no questions asked.

2) With U.S. interest rates hitting all-time lows yesterday, if you have any debt such as a mortgage, you're crazy not to look into refinancing it...

3) I think it's wise for us to be vigilant about China's efforts to recruit agents here, but attacking a U.S. citizen without a shred of evidence because he spent three years in China's Thousand Talents Program is going way over the line into McCarthyism. Here's an article on it from Bloomberg: Calpers Top Money Man Is Swept Up in Chinese Espionage Fears. Excerpt:

Suddenly Meng, a U.S. citizen who'd grown up in China, has been swept up in the debate over immigration, national security and the politics of who gets to be a "real American." Last week, a Republican lawmaker took to the prime-time TV show and accused the man who oversees California's $400 billion state pension fund of being a tool for the Chinese government, funneling American money into Chinese hands.

Now, Calpers is fighting back and rallying some of Wall Street's biggest names to quell the charge. Even in a time of heightened scrutiny over U.S. investments in China, the targeting of Meng, they say, goes too far...

4) I flew to San Francisco last year to attend the annual Fraud Fest conference, which is organized by the Berkeley Center for Law and Business and my old friend Herb Greenberg (among others). I was happy to see that I won't have to travel across the country this year because Fraud Fest 2020: 300 Years of Fraud is taking place in New York City on May 21 at the Thomson Reuters headquarters in Times Square. The event has a great list of speakers, including:

5) Speaking of conferences, my friend Isaac Schwartz of Robotti & Company Advisors is hosting the New Silk Road Forum in Istanbul from April 23 to April 24. Click here for details.