All eyes have been on China for quite some time as various threats play out. For years, the big specter over the Chinese markets has been trade tensions with the U.S. However, more recently, the issue has been the coronavirus, which put much of the Chinese economy on quarantine. So is this the time to be bullish or bearish on China? Bulls and bears place different levels of importance on various impacts to China’s economy.

Bulls and bears on China: the coronavirus

Let's start with the elephant in the room. There's no denying that the coronavirus is having an impact on the Chinese economy. However, bulls and bears differ on the severity of the problems it will have on China.

Chinese stocks finally started to decline amid bearish concerns that the damage to the nation's economy could be worse than first expected. However, they initially climbed as investors ignored the dangers and pushed stocks higher instead.

More than 74,000 people have been sickened by the coronavirus, and more than 2,000 people have died from it. The Chinese government has adopted strong measures to stem the spread of the illness, resulting in a near total shutdown of the economy.

There are signs that the coronavirus is slowing down as the number of new cases is on the decline, but the impacts of the outbreak will likely be felt for quite some time.

Chinese officials have also taken steps to prop up the nation's economy during the near shutdown. The People's Bank of China cut the one-year medium-term lending facility rate from 3.25% to 3.15%. The interest rate is the rate at which it lends money to banks.

The central bank had already slashed rates on its short-term reverse repo operations two weeks ago. The latest cut to the medium-term lending rate is the second such reduction in the current easing cycle. It follows a cut of 5 basis points in November.

Capital Economics analysts said in a note dated Feb. 17 that the PBOC didn't explain why it cut the key interest rate. However, they believe the move was aimed at reducing funding costs for banks that have sizable balances with the central bank. They also believe the cut was aimed at encouraging such banks to reduce their lending rates.

The cut to the medium-term lending facility made it look even more likely that the Loan Prime Rate would also be cut this week. Capital Economics analysts believe the PBOC has more easing work to do because a decline of 10 basis points in the MLF rate and LPR "won't be enough to drive a turnaround in credit growth."

They expect the PBOC to cut the MLF by another 40 basis points in the coming months. They also believe the central bank will have to "expand its re-lending quotas and relax constraints on shadow banking in order to direct more credit to struggling SMEs."

Nomura analyst Ting Lu and team also expect more easing from the Chinese central bank. For now, they believe Beijing is focused on keeping local governments except for those in Hubei province from escalating lockdown measures further.

Beijing has rolled out several measures already to help companies and consumers who are worst hit by the outbreak. Among the policies so far have been cutting interest payments, extending loan terms, reducing tax payments and reducing rents.

As far as monetary policy goes, Nomura analysts expect the PBOC to keep adding long-term liquidity to the banking system via a combination of high-profile cuts to the reserve requirement ratio and low-profile lending facilities like MLF, re-lending and re-discounting.

While they do expect the central bank to keep working to shore up the Chinese economy, they do not expect another round of "massive stimulus." Beijing wants to see real GDP double between 2011 and 2020, but the Nomura team doesn't believe it will pull out extraordinary measures to achieve that.

For one thing, policy space is limited after years of stimulus and rapidly accumulating debt. Further, the current account balance has been worsening, and foreign debt is on the rise. Inflation is expected to be elevated in the coming months. They predict a V-shaped recovery after the coronavirus outbreak is contained, so adding too much stimulus could cause the Chinese economy to overheat.

Bulls and bears on China: sentiment on Chinese equities

Capital Economics analysts also noted that investment appetite has taken a hit due to the coronavirus appetite. The bulls and bears have especially been affecting China in the equity market. Nomura analyst Masanari Takada noted that CTAs have been selling Chinese equities and buying U.S. equities. 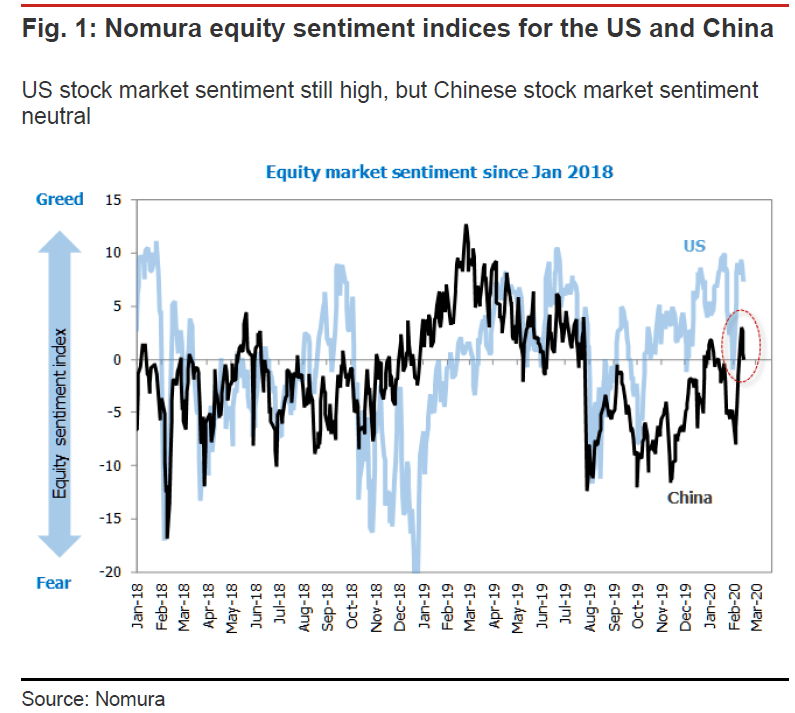 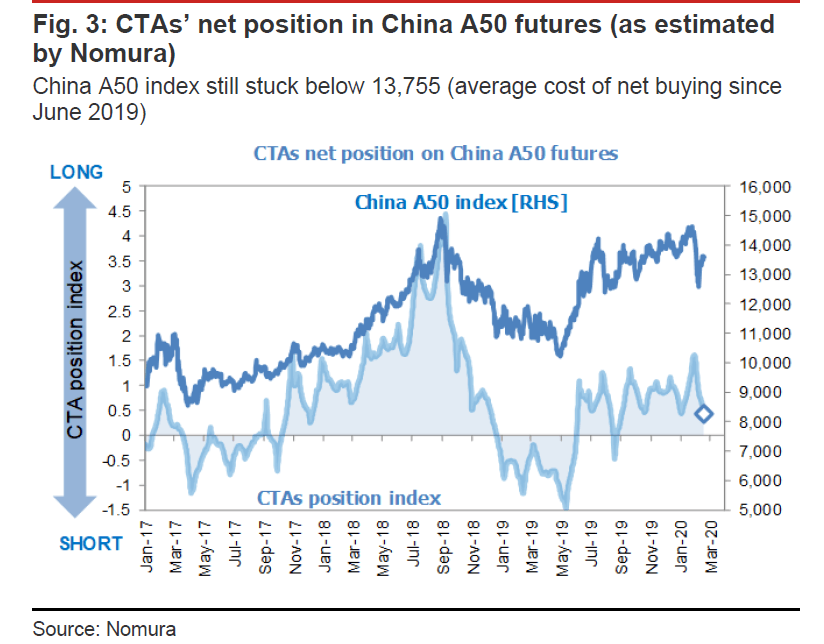 While the coronavirus has been weighing on equity sentiment in China, he also said seasonal patterns also suggest that bullish views aren't likely to resurface anytime soon unless Chinese policymakers intervene aggressively to support the market. 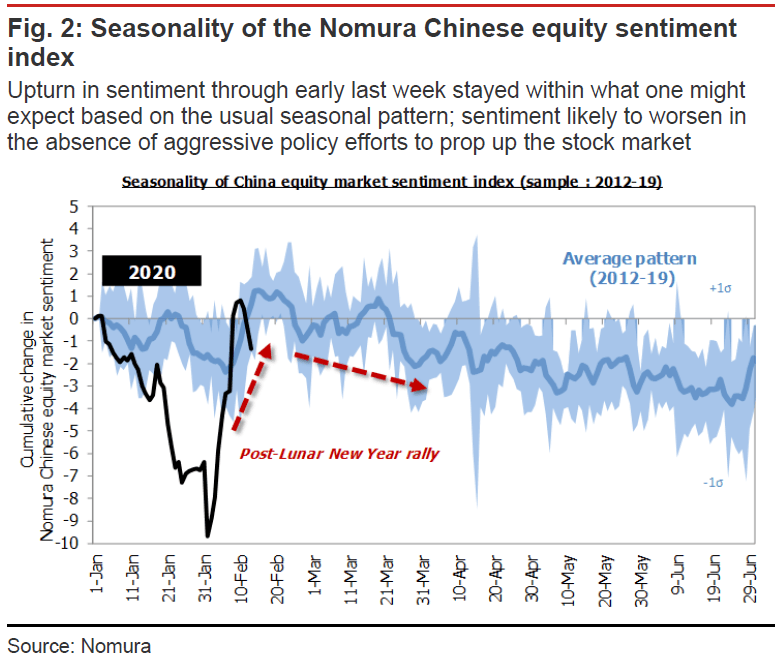 Thus, he predicts that Chinese stock market momentum will keep pointing downward for the time being.

Trade tensions with the U.S.

Another issue that's been weighing on sentiment in the bulls versus bears view of China is the trade tensions with the U.S. The two countries took a major step toward resolving the dispute last month with a Phase 1 trade deal, but we're not out of the woods yet.

The deal also includes improved protections for U.S. companies that have reported that their intellectual property and trade secrets have been stolen. For China, the trade deal should offer relief to manufacturers, which have been struggling under U.S. tariffs that made their goods more expensive.

With all the attention focused on the coronavirus right now, the bulls and bears are less interested in the trade tensions. However, once the outbreak is contained, we would expect trade tensions to again take center stage in the investment case for China.