ValueWalk
Home Business Berkshire Hathaway is the ‘No. 1 Retirement Stock in America’ 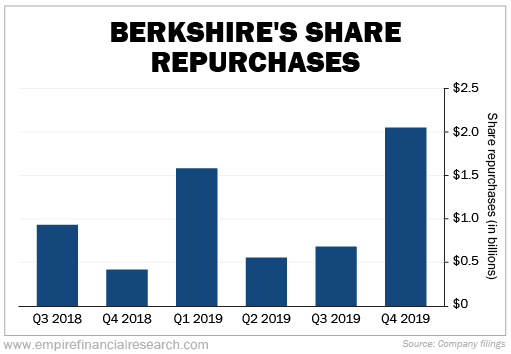 Whitney Tilson’s email to investors discussing that Berkshire Hathaway is the ‘No. 1 Retirement Stock in America’; Buffett is telling us to buy; Berkshire’s share repurchases; Updated estimate of Berkshire’s intrinsic value.

1) I’ve been pounding the table for quite some time now that Berkshire Hathaway (BRK-B) is the “No. 1 Retirement Stock in America.”

Importantly for all investors – and especially retirees – it's incredibly safe. It's an incredible collection of high-quality businesses, run by the greatest investor of all time, and has the ultimate Fort Knox balance sheet: $128 billion in cash and short-term investments, $19 billion in bonds, and $270 billion in liquid, blue-chip stocks.

Additionally, its intrinsic value is growing at a healthy rate – rising 17% last year, 10.8% annually over the past five years, and 13.5% compounded over the past decade.

And lastly, Berkshire's stock is cheap. It's trading today at more than a 20% discount to our conservative estimate of its intrinsic value.

To be sure, it's been much cheaper at certain times in the past – for example, at the peak of the Internet bubble in March 2000 when the stock fell to $41,300 per class A share, and during the depths of the financial crisis, when it hit $72,400. Regarding the latter, during the very week the stock bottomed in March 2009, my friend and former partner Glenn Tongue and I carefully analyzed the company and concluded that its stock was "a fat pitch." We shared our thinking in our book, More Mortgage Meltdown, which was published shortly thereafter. We've posted the chapter on Berkshire here.

While Berkshire may not be as cheap today as it has been during times of market extremes, it's still extremely attractive in light of the fact that we're more than a decade into a complacent bull market, in which most stocks are trading at full (if not overly full) valuations.

Thus, relative to alternatives like safe but low-yielding bonds and blue-chip but fully valued stocks, this is one of the very best times to buy Berkshire.

Buffett is telling us to buy

2) Warren Buffett's annual letter was shorter and drier than usual. One long-time follower even e-mailed me to say he thought it was "boring." Maybe he's right – but boring can be beautiful from an investment perspective.

I think Glenn's take on it is exactly right:

As I reflect on Buffett's letter, I think he is telling us that Berkshire is cheap and we should buy it. He would never come right out and say this, of course – instead, he's done it in a way that only long-time followers would understand.

Look at how he tackles, one by one, the concerns in the market that might deter investors from buying the stock. In the letter, he:

a. Describes the unique nature of Berkshire's businesses, especially insurance, implicitly making the point that they deserve premium valuation.

b. Explains why GAAP accounting understates Berkshire's earnings power, and includes a section on retained earnings, especially at companies in the stock portfolio.

c. Assures investors that there will be no overhang on the stock when he dies ("In all, I estimate that it will take 12 to 15 years for the entirety of the Berkshire shares I hold at my death to move into the market.")

d. Addresses the succession issue by highlighting the company's "two key operating managers," Ajit Jain and Greg Abel. Buffett announced that, for the first time, they will share the stage at the annual meeting, which is further evidence that one or both of them will be Berkshire's next CEO.

e. Puts his money where his mouth is by having Berkshire buy back an increasing amount of stock – and expressing a willingness to buy a lot more.

f. Lastly, doesn't clutter up his letter with issues beyond these ones.

3) This chart shows Berkshire's share repurchases since they began in mid-2018 (note the trend)...

In his annual letter, Buffett is clear that he's looking to buy back a lot more (he's never before been so specific about who shareholders should call if they want to sell their stock to the company). He writes:

In past reports, we've discussed both the sense and nonsense of stock repurchases. Our thinking, boiled down: Berkshire will buy back its stock only if a) Charlie and I believe that it is selling for less than it is worth and b) the company, upon completing the repurchase, is left with ample cash.

Calculations of intrinsic value are far from precise. Consequently, neither of us feels any urgency to buy an estimated $1 of value for a very real 95 cents. In 2019, the Berkshire price/value equation was modestly favorable at times, and we spent $5 billion in repurchasing about 1% of the company.

Over time, we want Berkshire's share count to go down. If the price-to-value discount (as we estimate it) widens, we will likely become more aggressive in purchasing shares. We will not, however, prop the stock at any level.

Shareholders having at least $20 million in value of A or B shares and an inclination to sell shares to Berkshire may wish to have their broker contact Berkshire's Mark Millard at 402-346-1400. We request that you phone Mark between 8:00-8:30 a.m. or 3:00-3:30 p.m. Central Time, calling only if you are ready to sell.

Here's my interpretation of what Buffett is saying:

We don't think Berkshire is a 50-cent dollar. But nor is it a 95-cent dollar. It's roughly an 80-cent dollar. At this valuation, we're content to buy back more than the 1% of our shares we repurchased last year – perhaps 2% – so please call us if you have a meaningfully sized block to sell. And at a 10% lower valuation, we'd be quite a bit more aggressive – and 20% or more lower, we'd back up the truck!

4) I have long valued Berkshire the same way I believe Buffett does: by simply adding cash and investments per share to the value of the wholly owned operating business, calculated by placing a conservative multiple on Berkshire's pre-tax earnings (currently 12 times, but as low as 8 times during the financial crisis). Below, you can see my calculations over the past 18 years: 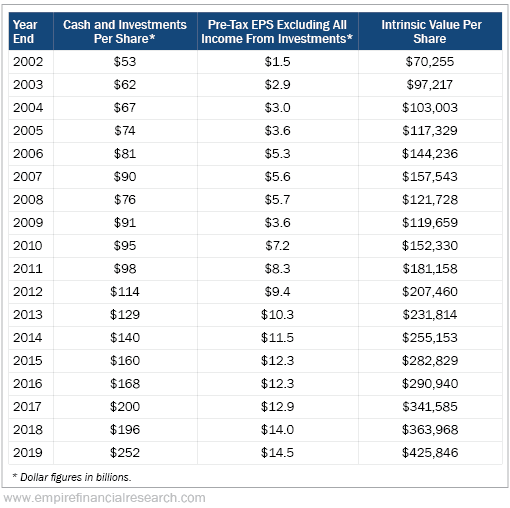 Note that Berkshire's intrinsic value grew 17% last year, while the stock only rose 11% – making it even more undervalued...

For those of you interested in the nitty-gritty, here's where I find Berkshire's investments and earnings figures on the company's balance sheet and 10-K form: 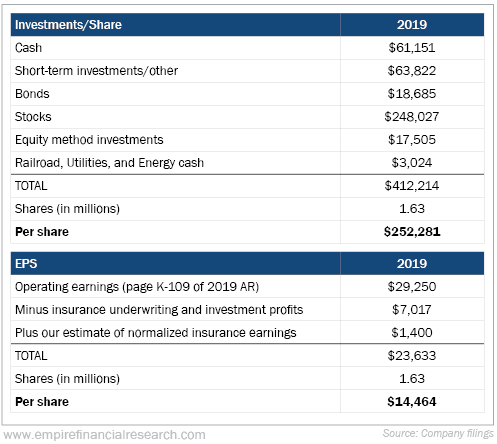 5) Glenn has developed another way of seeing how cheap Berkshire is and how it could be a nice retirement stock:

Take the market cap ($560 billion) and subtract the cash and cash equivalents ($127 billion) to get $433 billion. Then divide this by Berkshire's 2019 after tax-earnings of $24 billion (found in the two-page fourth-quarter news release) plus the retained earnings of $8.3 billion from the 10 stocks in which Berkshire owns a material stake, the largest of which are Apple (AAPL), Bank of America (BAC), American Express (AXP), and Wells Fargo (WFC) (from page 5 of Buffett's annual letter), which totals earnings of $32.3 billion.

That's very cheap for such a safe, high-quality business, especially in this market!

6) This table shows the breakdown of Berkshire's stock portfolio (naming each stock valued at more than $2 billion), based on Friday's closing prices: 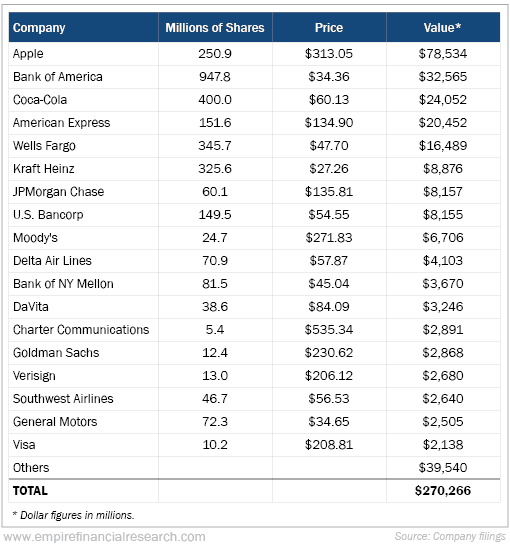 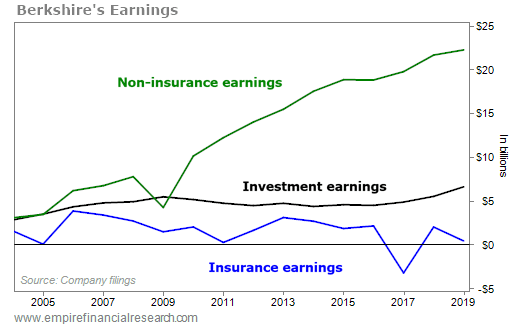 8) Lastly, the chart below shows the extraordinary growth of this retirement stock - Berkshire's insurance "float" (which Buffett discusses on pages 7 and 8 of his annual letter) over the past 25 years: 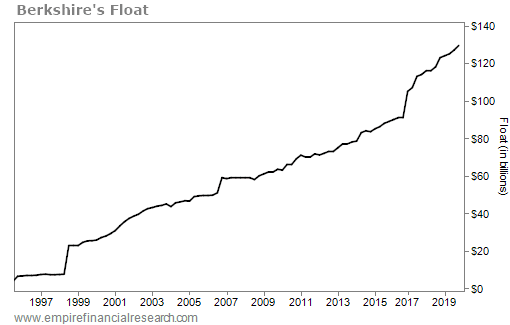