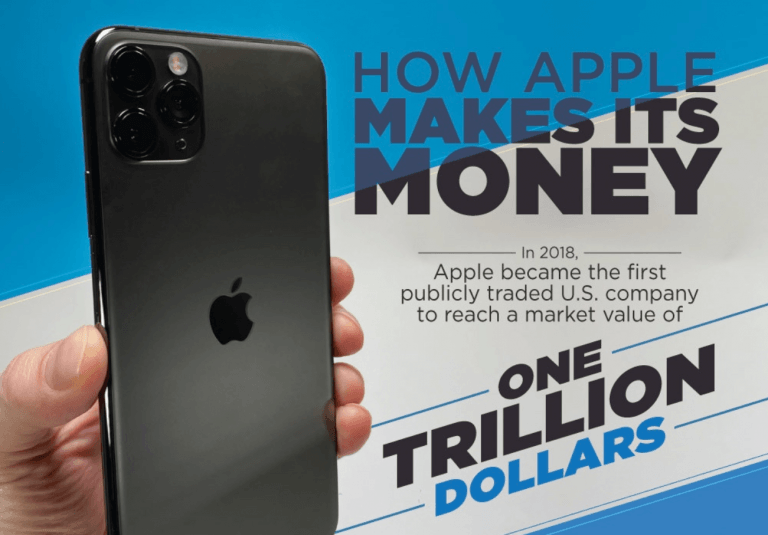 In 2018. Apple became the world’s first publicly traded company with a market value of $1 trillion. Apple alone is worth over 1% of the world’s GDP, and it’s worth more than three of the world’s highest net-worth individuals. Just selling phones and computers isn’t what makes this brand so valuable, however. Much of Apple’s net sales is from iphone, but there are many other components. The brand loyalty behind this tech giant extends to services you may have never even heard of.

Apple makes 41% of the smartphones in the United States, 38% of the tablets, and 46% of the smartwatches.Samsung is a distant second across all categories, but devices alone aren’t the only generators of Apple’s net sales.

Apple’s other services include Apple Music, Apple Pay, iCloud, Apple News+, Apple Arcade, Apple TV+, and Apple Care+, all of which provide additional revenue streams to the tech giant on top of its device sales.

Steve Jobs’ philosophies on quality are a large part of why this company has remained so popular over time. On design, Jobs said the aesthetic for each Apple product should be carried all the way through every aspect of the product’s design. He placed an emphasis on quality over quantity, and his marketing philosophy was to think differently. Leadership and innovation were at the top of Jobs’ list when it came to his company’s success. This has driven Apple's net sales on a long term basis by securing customer loyalty.

The Value Of Refurbished Apple Products

Macs have always had many benefits that PCs just don’t offer. Updates and improvements for Macs are pushed out more frequently, while the quality of Macs over PCs has always been apparent. Macs tend to have longer lives with better support, and all apple products offer seamless integration across devices.

Thanks to this high quality, there is a huge market for refurbished Apple products. It’s no surprise that something so well made holds its value. Learn more about how Apple's net sales are driven from this division in the infographic below.