Most economists – whether liberal or conservative – believe that during recessions we need to run substantial federal budget deficits to not just assist the unemployed and their dependents, but to stimulate economic growth. Indeed, during recessions, deficits will occur automatically as tax receipts fall and government spending on unemployment insurance benefits, food stamps, public assistance, and other government transfer payments rise.

Going back to the time of the Great Depression during the 1930s, the father of fiscal policy, John Maynard Keynes, offered this bit of advice: During recessions, run government deficits, and during times of prosperity, run surpluses.

Let’s look at the record over the last twenty years to see just how well we have been following this sage advice. In the accompanying table, it is shown that we ran surpluses during fiscal years 1999, 2000, and 2001, and deficits every year since then. 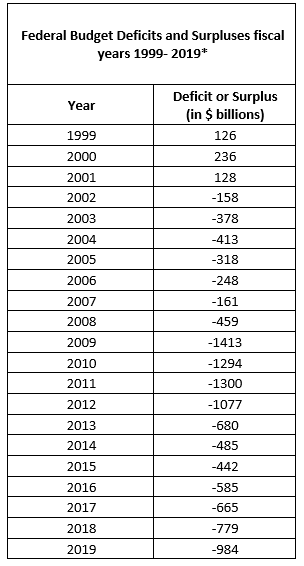 Sources: Economic Indicators (President’s Council of Economic Advisors), Department of the Treasury and Office of Management and Budget.

But the deficit continued rising – to $378 billion in fiscal year 2003 and to $413 billion a year later. This might have been justified had the recession been very severe, or if the recovery was extremely weak.

But that was hardly the case. Indeed, our economy was caught up in a speculative real estate boom, which should have been reined in before an inevitable financial crisis.

In 2005, the federal deficit finally did begin to decline, although the Federal Reserve continued to make money readily available to finance the speculative real estate bubble.

The Great Recession, as it was soon known, would become the most severe economic downturn since the 1930s. Deficits from 2009 through 2012 each exceeded one trillion dollars.

US deficits just getting bigger

President Barack Obama, who took office in January 2009,  pushed huge spending bills and extremely large tax cut through Congress, which were largely responsible for preventing the recession and the accompanying financial crisis from becoming a full-fledged depression.

After peaking at over $1.4 trillion dollars in 2009, the budget deficit declined steadily through 2015, reaching a low of $442 billion. And since then, it has risen steadily, with deficits of over one trillion forecast for the coming years.

Most of the increase is due to the ten-year $1.5 trillion tax cut that President Donald Trump pushed through the Republican dominated Congress in December 2017. This, at a time of the lowest unemployment rates in five decades.

And yet, we may soon see still higher deficits. The record economic expansion we have been enjoyed will very likely come to an end within the next year or two. Indeed, it may have been sustained as long as it was by the massive deficits of the last two years.

So, what will happen when the next recession does arrive? Perhaps we will look back nostalgically at the good old days of trillion-dollar deficits.