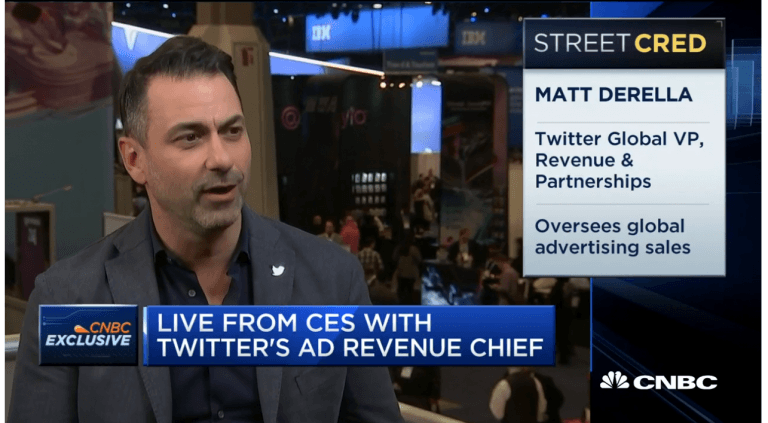 The following is the unofficial transcript of a CNBC EXCLUSIVE interview with Twitter Global Vice President of Revenue and Content Partnerships Matt Derella and CNBC’s Julia Boorstin on CNBC’s “Closing Bell” (M-F 3PM – 5PM) today, Tuesday, January 7th. The following is a link to video from the interview on CNBC.com:

Matt Derella: We decided to ban political ads based on principle

WILFRED FROST: Welcome back. Twitter announcing a new partnership with the Oscars streaming the official red carpet pre-show exclusively on their platform. This comes on the back of a multitude of content deals in 2019, with partners ranging from Blizzard Entertainment to the 2020 Olympics.

COURTNEY REAGAN: Live from CES to discuss that and more, Global Vice President of Revenue and Content Partnerships at Twitter, Matt Derella. He’s with our own Julia Boorstin. Take it away, Julia.

JULIA BOORSTIN: So, Wilf just talked about all your content partnerships. The most recent being with ABC and the Oscars. You have another one with the NBC and the Olympics.

JULIA BOORSTIN: How important are these content partnerships to reassure advertisers about the context in which people will be seeing their ads?

MATT DERELLA: Yeah. The content partnerships that we have are important just for Twitter in general. We want to enrich the conversation on Twitter. And one of the ways we can do that is by bringing this incredible premium content, whether it’s with NBC and the Olympics, or most recently, our announcement around the Oscars, with ABC and the Academy. It’s an opportunity for the marketers to align themselves with incredibly safe content around some of the biggest conversations happening on Twitter. And for ABC and the Academy, you imagine it enriches the conversation in the broadcast that’s happening. With our partnership, which is exclusive on Twitter, they’ll have all-access red carpet treatment and be able to interact with celebrities while they’re on the red card.

JULIA BOORSTIN: The other thing you’re talking about here that’s new is some new ad formats. Which of these announcements or what part of your strategy is most important to help you compete with the big behemoths, which are Google and Facebook, and then these rising stars such as Snap and even TikTok.

MATT DERELLA: Yeah. We’re really focused on what makes Twitter unique. And one of the things that we are absolutely a preferred partner with marketers on is helping partners launch something new. We see that her with CES. We saw it just a few weeks ago with Disney Plus, where they used a format called a promoted trend spotlight. This is a format that’s edge-to-edge, immersive video sitting on top of the explore tab on Twitter. It’s where the conversation is happening on Twitter. And it gives brands a chance to really connect with what’s happening on Twitter. What we announced just yesterday is that we’re expanding it to twelve new markets globally, so now we can continue to strengthen our strategic anchor around helping brands launch all around the world.

JULIA BOORSTIN: One thing that you’re not doing is political advertising. That was a huge announcement. And now you’re missing out on tens if not hundreds of millions of dollars of political advertising between now and the presidential election. How much is that going to really hurt your bottom line?

MATT DERELLA: You know, it’s a decision that wasn’t made based on the bottom line. It was a decision that was made based on principles. And as we looked at this really powerful ad system that we’ve created, that allows many brands to launch products and build their businesses in a really powerful way. It also has major implications when it comes to our elections. And we made the decision that we want to focus our efforts, and the candidates’ efforts in political advertising all around the world, on the earned portion of what’s happening on Twitter. So, we prohibited it globally.

JULIA BOORSTIN: How hard is this to enforce? And how many more people do you need to hire to sift through issue ads? Which can be a tough thing to figure out. Is it an issue ad, is it a brand that’s promoting their products?

MATT DERELLA: Fortunately, we have an incredible team that works on this. And we use a lot of algorithms and machine learning to help us work at scale all around the world. But you’re absolutely right. This is something that we are working on. We’re iterating it on every single week. But we feel like we’re in a very good position. We’ve been now several weeks into this. And we feel like we made the right decision for us and our customers.

JULIA BOORSTIN: It is a controversial decision, though. Some would say though that companies can still promote policies and advertise for what they’re doing, if, say, you have an oil company promote drilling in the arctic, and say it’s not an issue ad, because they’re just promoting some of their business practices. And say if you’re against that practice, a nonprofit could not take sort of the opposite stance. And sort of you’re taking the playing field and making it inherently uneven.

MATT DERELLA: We are allowing issue-based ads, with certainly limitations. We allow, as long as those ads aren’t focused on a particular legislation or a candidate, we allow organizations that are nonprofits to actually advertise, but with limitations. We want to make sure that we don’t create filter bubbles with this powerful system we have. So, that’s one of the ways that we’re doing it.

JULIA BOORSTIN: It sounds like it’s tough to enforce though.

MATT DERELLA: No, I think we’ve actually done that. I think one of the things that we’re focused on, though, in addition to just the political ads, is just making Twitter a safer place in general for people who are coming there. And making it easier to actually get that content.

JULIA BOORSTIN: Last quarter, Twitter’s results missed expectations on both the top and bottom line, due to a product bug that then made it harder for you to target advertising. I know you can’t give us financial results yet, but looking ahead to 2020, do you feel like you have the systems in place to allow you to do your job, which is deploy advertising without the kind of massive problems you had last quarter?

MATT DERELLA: Yeah. Well, I think there’s two parts to that. That earnings result certainly also had the17% year on year growth end of year in our usage. Which I think is a critical result for us. And I think shows the amount of focus and innovation, just making it easier to follow what’s happening on Twitter and join those conversations. On the ad side, we feel like we really have the core of the launch in connect story down with marketers. On mobile app downloads, we did have an issue there.

And that set us back. But not an existential one. And as I think about the long-term opportunity for Twitter, both in mobile app downloads which is a big and growing market, but also in performance marketing in general, there’s a huge opportunity for us there. And I think we have the appropriate amount of focus on it on the revenue marketing team.

JULIA BOORSTIN: Do you feel like there’s the risk of other similar bugs popping up and disrupting your business going forward?

MATT DERELLA: I think over the long-term we’re as well-positioned as we’ve ever been as a company, with the usage growing so well. We have some incredible innovation that’s coming. We’re going to make it as easy to follow a topic as it is to follow an account, like really take the burden off of tuning your Twitter feed and off the customer and actually put it on Twitter. I’m really excited about some of that. And I think we’re well-positioned going into next year.

JULIA BOORSTIN: Great. Well, we look forward to hearing about some of those iterations to the product going forward. Matt Derella, thank you so much for joining us here at CES.

JULIA BOORSTIN: Courtney, back over to you.