ValueWalk
Home Business Silver or Gold: Which to Buy & Why? 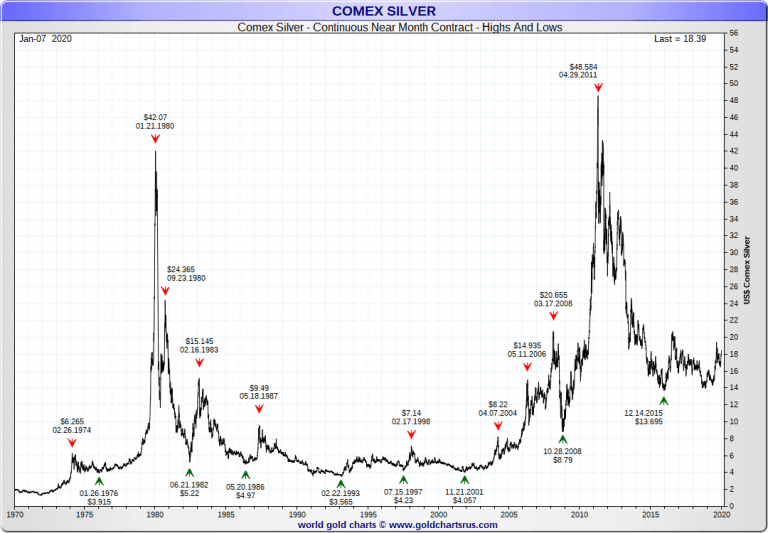 Here we dig into why investors might choose gold and or silver.

If you are buying bullion, you should consider each of these two classic precious metals in varying proportions depending on a multitude of factors we will cover here.

Charlie Munger, Warren Buffett’s right-hand man today, is an accomplished investor in his own right. Just like Buffett, Munger had his own investment partnership (he was convinced to go into investing by Buffett, leaving behind a career in law) before coming to Berkshire Hathaway.  However, unlike Buffett who followed a deep value investing strategy as Read More

Typically in my more than over a dozen years working and investing in the high volume bullion precious metals industry, most investors once informed will choose to allocate a portion of funds to both the historic yellow and white precious monetary metals. The question of what amount in either precious metal is what we will dig into detail here.

If you are sitting on some potential nominal stock market gains from especially from the second half of the 2010s decade, now is a great time to ‘lock-in’ and crystalize some of those profits by acquiring a prudent physical precious metals bullion investment position.

Now we have nearly 50 years of simple math and arithmetic of data which proves that while living under a full fiat currency monetary regime it makes common sense to hedge stock and bonds with a prudent position in bullion.

Given historic precedents in most reader’s lifetimes, a 10% gold allocation is likely not enough. The best risk-reward ratio for prudent bullion allocations is surprisingly about two and a half times that amount looking backward throughout this full fiat currency era.

Moving forward I am going to assume you understand why to begin the 2020s, allocating a portion of one’s wealth into bullion makes long term good value sense. The list of the whys is exhaustive and numbers in the trillions of yet to be accounted for reasons.

In the next commodity boom to come, the mania for these two precious metals should reach historic levels outperforming any bullion bull market prior and probably to come in any reader’s lifetime.

Remember too that physical silver and gold bullion are some of the lone remaining assets you can own outright, very privately, with no risk of a complete loss other than outright theft. Physical precious metals like silver and gold will always retain value among human beings.

So how should one place their bullion bets with Silver or Gold?

Or a mix of both Silver and Gold perhaps?

Over the years, I have had the privilege of speaking with +10,000 investors who were actively considering which mix of the two precious metals made the best sense for their objectives.

My suggestion was and remains the following.

Write yourself a 500 to 1,000-word letter citing exactly WHY you are interested in getting a prudent physical precious metals position. Literally, write down the motives and reasonings for your wanting to do so.

Then read it back to yourself. Ask yourself the following regarding what you wrote down.

What percentage of the underlying motives are to keep the purchasing power of what you have attained?

What percentage of the underlying motives are to enhance the purchasing power of what you have attained?

If over the long term, you want to keep the value of what you have saved with less volatility and a literal pack of government partnered central banks buying alongside you. Then buying gold bullion is certainly something you should do.

If over the long haul, you want to increase the value of what you have saved and you can stomach price volatility while also having a long term patience. Then buying silver bullion is certainly something you should consider doing.

Other questions you should consider are the following.

What age are you?

In what timeframe may you need the capital converted back into fiat currency again?

Typically older investors buy majority gold bullion as they understand that majority central bank gold buying is likely here to stay for decades to come. The financial world is underpinned by official gold reserves and its role as de facto safe haven money is not going away anytime soon.

Generally, younger investors will buy majority silver bullion as they have decades to wait out what most bet is an inevitable revaluation higher for silver in the years coming. It is a common belief we will again see silver bullion priced by more than $50 oz in fiat Federal Reserve notes, and most likely above the three-figure level before the bull market mania reverts to the historic valuation mean.

Historic precious metal bull markets tend to have gold lead the start of the bull run, then at some point silver begins to play catch up to gold as investors look to get more value for their precious metals bets.

The chart below covers the 1970 - 1980 western nation driven gold and silver bull manias. You can see how silver only really outperformed gold at during the final year of the mania into early 1980.

Remember that this current bullion bull market in the 21st Century is being driven by the east and the west simultaneously. There has never before been a global bullion bull market before, thus this by virtually all measures is already the largest on record from the year 2000 to 2020.

In this 21st Century chart below you can see that silver outperformed gold from 2009-2011 briefly. Many expect to see something similar in the latter 2020s.

Given that in 2015, silver bullion investors bought about 1/4th of the year’s entire global silver supply. It would not shock me one day to see that percentage double before this 21st Century bullion bull market finally mania peaks.

Remember that unlike physical gold, silver is a tiny market worth only about $20 billion per year in supply. That is a drop in the financial bucket with a financial world holding more than $300 trillion in liquid assets owned.

Currently, we have a gold-silver ratio (GSR) in the middle 80s. Most precious metal bull markets peak out with the GSR falling into relative low points as in the year 2011 it hit near 33, and in the year 1980, the GSR dipped into the teens.

It is quite likely this 2020s even 2030s version may see a GSR go into the teens or possibly lower at its mania peak.

There are many who are buying silver bullion right now with the intent to swap the silver for gold bullion when the GSR dips into lower historic ratio levels. By doing this investors could acquire more gold potentially than they might have if they simply bought gold and no silver today planning for a trade at a later date when the GSR thins.

Given current historical undervaluation of gold and silver bullion relative to stocks and bonds (paper financial assets), and real estate. Now is a perfect time to be buying bullion as a long term store of value and investment bedrock position.

Both gold and silver should not only maintain their purchasing power near these current spot prices but also enhance in value as this largest financial bubble bleeds away into real precious item valuations to come.

Consider all the factors we discussed here when choosing between both. They are excellent options and that is why we offer them in high volume to investors around the world.

A bullion buyer years before the 2008 Global Financial Crisis, James Anderson is a grounded precious metals researcher, content creator, and physical investment grade bullion professional. He has authored several Gold & Silver Guides and has been featured on the History Channel, Zero Hedge, Gold-Eagle, Silver Seek, Value Walk and many more.

Given that repressed commodity values are now near 100-year low level valuations versus large US stocks, James remains convinced investors and savers should buy and maintain a prudent physical bullion position now, before more unfunded promises debase away in the coming decades.